You are here: Home / Incorporating Vintage at Home in Portland / 9/11 — GRATITUDE AND TREATS 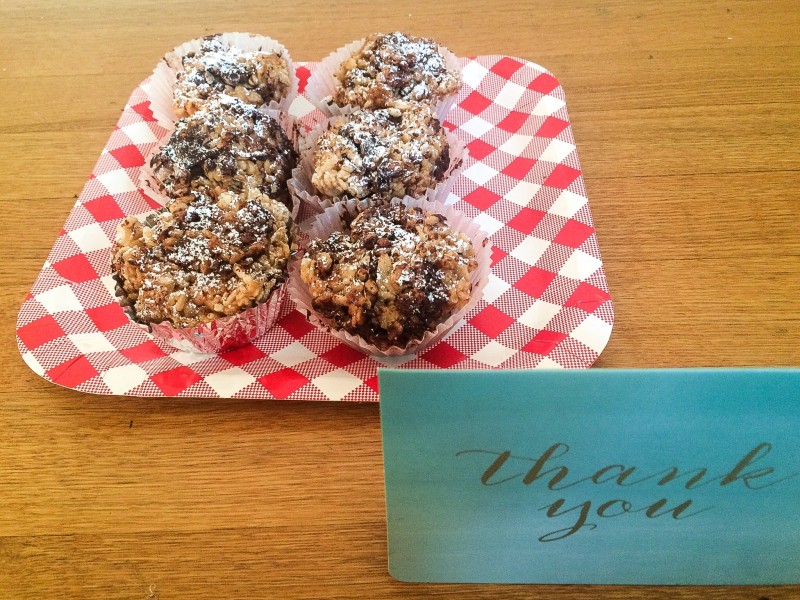 I didn’t know anyone personally who died on that day, but I originally thought about flying back from Boston to California on 9/11/01, but had decided to fly out on that 9/13 instead.

My husband, baby and I went to visit my sister and her family outside of Boston — the first time our two infant boys met each other. We had had a wonderful week together in Boston and the Hamptons that first week of September, and because we had booked the ticket for Thursday and not Tuesday, we still had a few days left to enjoy one another.

I remember waking up on September 11, 2001 early and thinking, could there be a clearer, more beautiful Indian summer day?

We prepared the car for a quick trip up to Camden, Maine to visit my dear aunt Sandy.

We turned on the television at 8.30 am to check the weather forecast for the rest of the week.

And watched live television as the world fell off its axis and everything changed.

One plane flew into WTC.

And then as we watch astonished, one tower fell down. 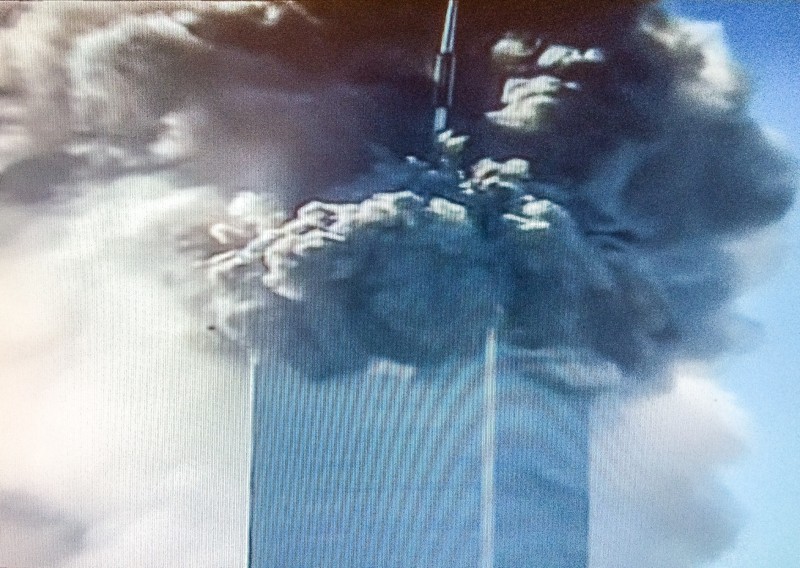 Somehow we made it to my aunt’s house and we watched the coverage together.

We ate lobster rolls that were probably delicious but I remember feeling so numb it felt like nothing registered with my tastebuds.

We guzzled cocktails, trying desperately to put together the pieces of a drastically different world.

My wonderful Aunt Sandy held my baby for the first time, and we all found a small snippet of joy in a day of such horror.

Here’s a picture she just sent me today; clearly she too was remembering our time together and how reassuring that day it was to be surrounded by loved ones. 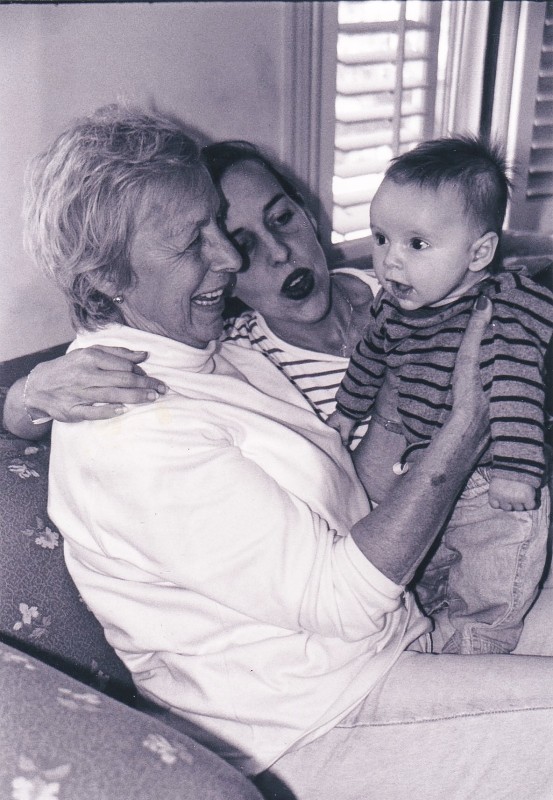 We watched the news over and and over and even though I watched the towers fall hundreds of times over the next week–still I couldn’t quite believe it. 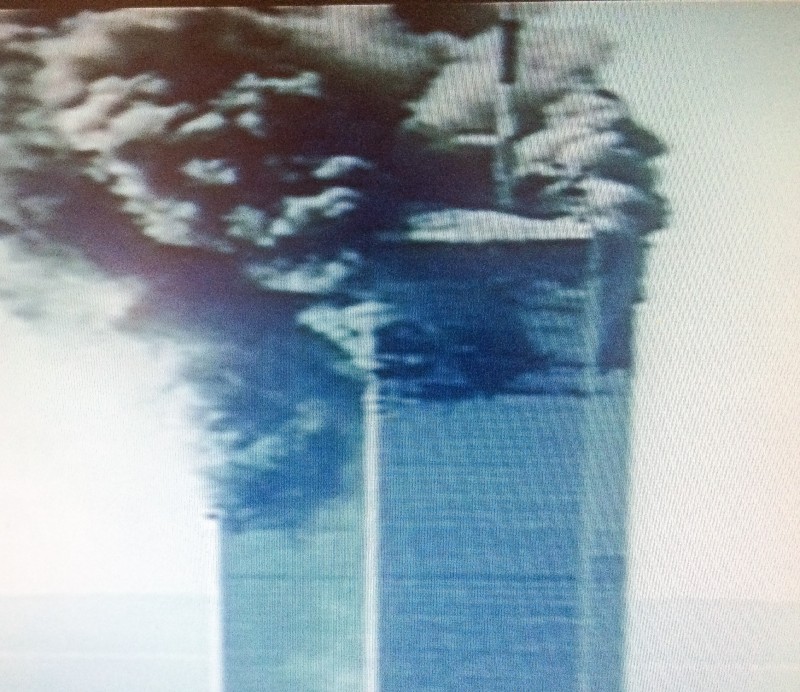 The next day we kissed my beautiful Auntie goodbye, and then drove back to my sister’s house. Like so much of the world, we watched television incessantly in the days that followed, as if repetitive viewings would make the unimaginable more real.

Growing up in a suburb of NYC and having visited the towers on numerous occasions, though, the sudden absence of both towers was unthinkable.

Not only had the New York landscape changed forever, so had America.

Suddenly there was the world before 9/11 and the world after.

We finally were able to fly back home Saturday out of Logan, the original location of the two flights that had crashed into the Twin Towers. We arrived to find an airport  in mourning and loping sadly but valiantly through the motions.

Everyone at Logan was crying or on the verge of — so many co-workers had been lost. All the passengers were in full white knuckle mode. We boarded our flight, and as we buckled in, the pilot addressed us over the intercom.

I will never forget it.

He talked about we were all probably mourning lost friends, but how Americans were resilient. He applauded our courage for getting back on a flight just days after this tragedy, and that we’d need to look out for each other on this flight. If someone looked scared, we were to reach out to them, reassure them.

He also said that he was counting on us to watch his back (cockpits still weren’t reinforced). If someone tried to take over the plane, we’d need to channel the courage of flight 93 and deal with the terrorists ourselves.  Keep in mind, 9/11  had happened just a few days before and everyone was skittish.

I remember that moment. Almost three hundred people, most of us strangers, each made eye contact and gave one another a silent nod.

We were in this together.

When those wheels finally set down in San Francisco, we all let out a collective sigh of relief.

Fourteen years later, I still feel like I dodged a bullet.

It could have just as easily been my family on that cross-country flight that crashed into that Tower 1 or 2 — just blind luck meant I picked what was behind door #1 — a plane ticket that resulted in a safe landing. What was beyond door #2 was beyond comprehension.

So every year on 9/11 I remember both my luck and show gratitude for strangers who gave up their lives for others.

I think of how easily everything could have turned out differently, and try to shower gratitude everywhere.

One of my son’s friend’s birthday is 9/11 and I remember him telling me once that his birthday is usually so somber for adults. I thought for once I would try to change that.

I did a pasta drive by.

My son told me his friend’s favorite meal and I made it. Homemade mac and cheese with Parmesan and pesto.

Using my son as conspirator, I timed it so baking times coincided with the end of third period. My son and his friends walked out of class, onto the grassy lawn and into the arms of this. 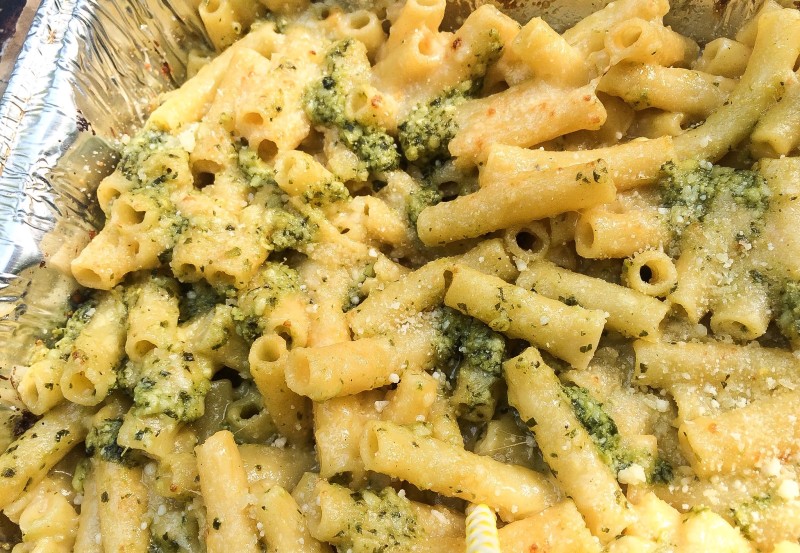 I gave him a stack of plates and forks, and the posse ate it in the grass.

Oops, I hope they saw the yellow birthday candle in the middle of it! 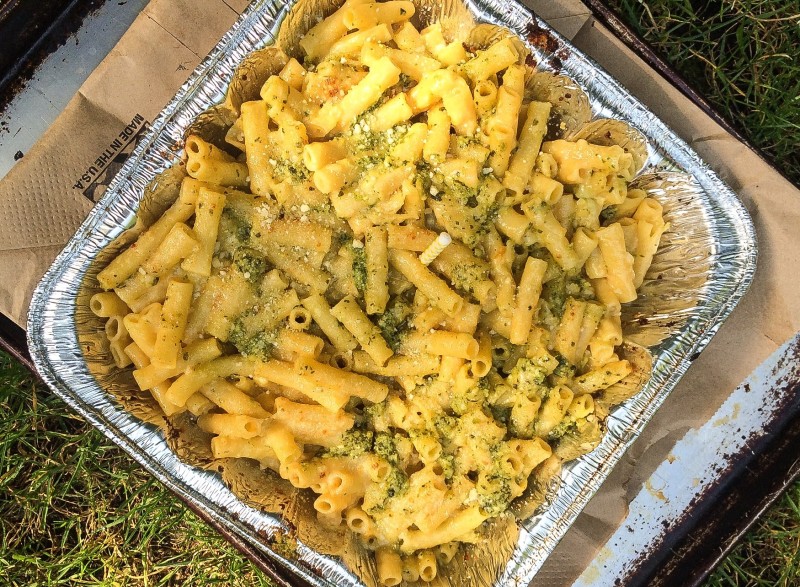 And then I started cooking for other people on my list.

I wanted a sweet that seemed happily familiar and comforting, but I wanted to mix it up a bit. 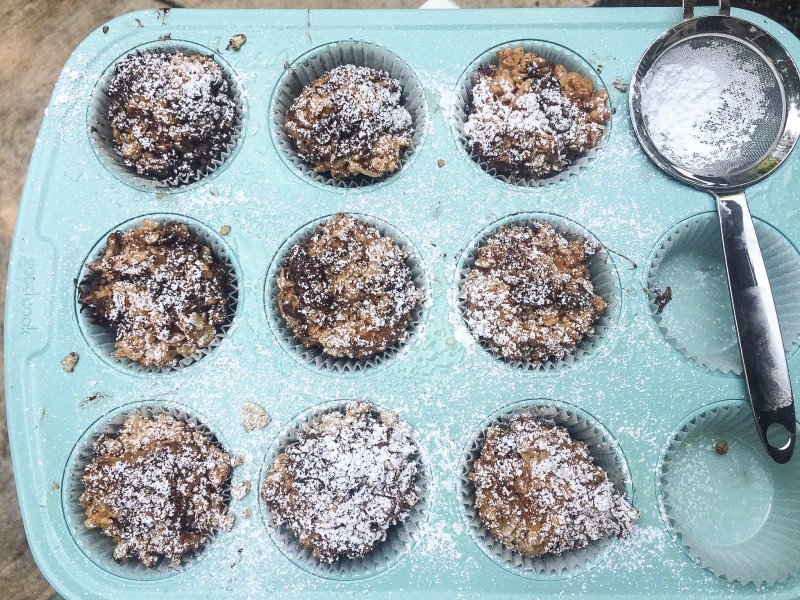 I added two cups of peanut butter to the melted marshmallows and butter and a good spike of vanilla. I also added in a couple cups of Guittard dark chocolate chips.

Instead of the overly sweet finish of regular Rice Crispy treats, they had a nice peanut buttery and chocolaty finish.

Usually I form Rice Crispy treats in a glass pan but this time I scooped out the warm goo with an ice cream cup and put them in muffin cups — far easier to serve and I think they looked better, too. 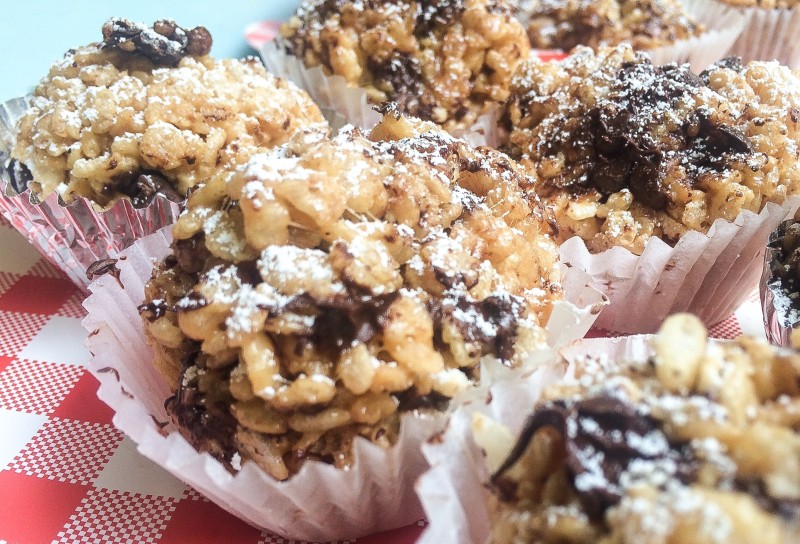 Next up, I made a pot of soup.

Who couldn’t use a hot cup of spicy sausage and lentil soup?

It had two kinds of sausages, leeks, lentils, basmati rice and a touch of saffron.

I packed it up and hit the road. 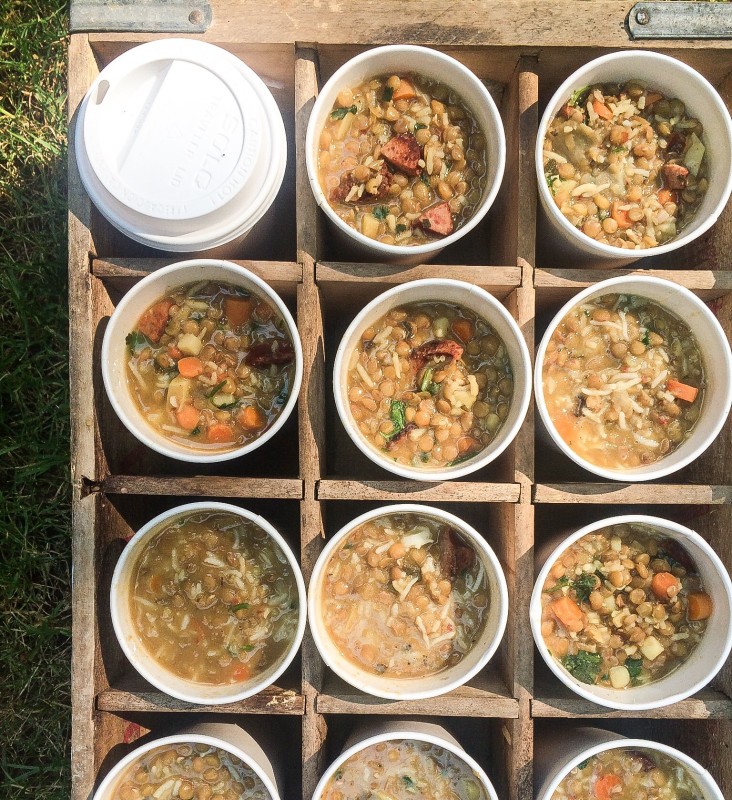 I had a lot of people I wanted to visit.

Like my pal whose refrigerator broke and she then lost all her food — plus all of her meds (almost 1K a month without insurance).

And another friend who is tackling breast cancer.

And coming back to the spirit of the day, I wanted to visit all those men and women who sit and wait for disaster just in case help is needed. 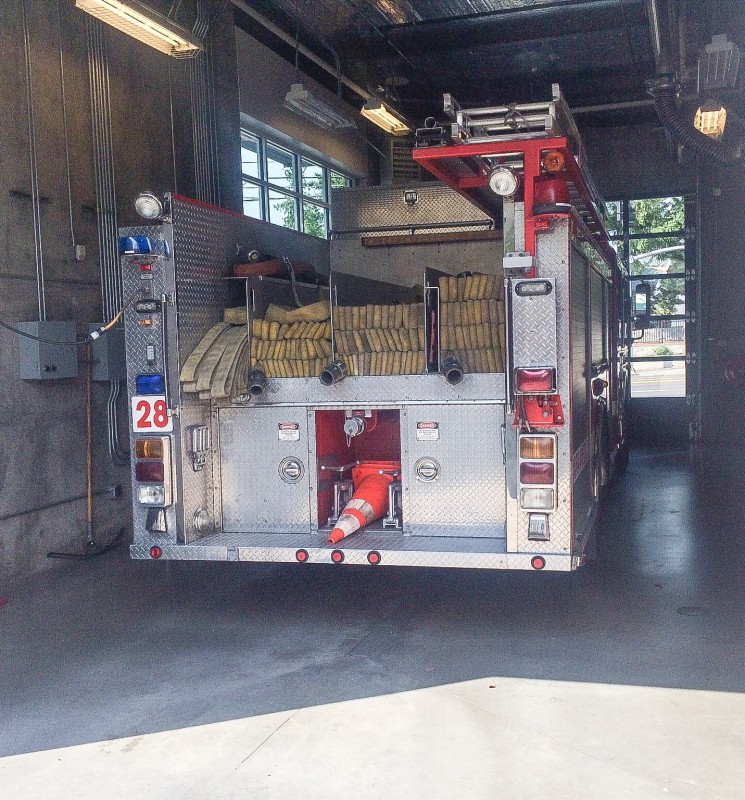 The first firehouse was eerily empty.

I walked through the building, and found it poignant when I saw everyone’s shoes on the floor and car keys lined up on the counter. I guess they were out on a call.

I left the treats and a note as to what it was, what 9/11 means to me and how grateful I am for their service.

I hit the second fire station to see two adorable guys out front who waved at me as I pulled up.

I said I had treats for them. 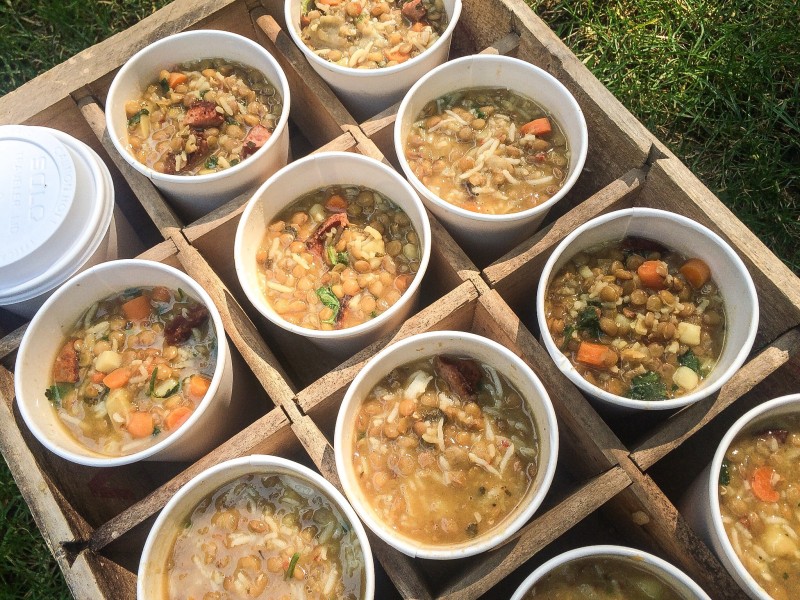 I found myself surrounded by the sweetest faces of eight firefighters. As I unloaded the soup and desserts,  I explained why I was there.

I almost started crying telling them how personal 9/11 was for me and how lucky I felt to have chosen 9/13 and not 9/11 to fly that year.

I talked about how the thought of all those brave firefighters walking up the stairs to their doom because they were needed filled me with such awe.

How I couldn’t thank those that died, but I could thank them, their brothers.

I asked if I could take their pictures because I wanted it as a visual aid when I talked to my kids;  I was going to tell them that I thought that 9/11 isn’t so much a story about terrorism but about the courage of every day people. Like office workers and firefighters and passengers on planes who band together to do extraordinary things in terrible times.

They insisted on me joining the pic, and though I almost started to lose it for real, I did.

Just look at those faces and think about this — on any given day they might just risk their life to save yours. Doesn’t that just amaze you?

As luck would have it, they were just coming in from a fire and were just sitting down to a lunch of hot dogs and potato chips. My soup and dessert couldn’t have been better timed, and it filled their table.

Another anniversary  of 9/11. A gift of another year for me but one that has been denied to so many others.

And so to those in my life for whom I’m eternally grateful but didn’t touch base with yesterday, I leave you with this. 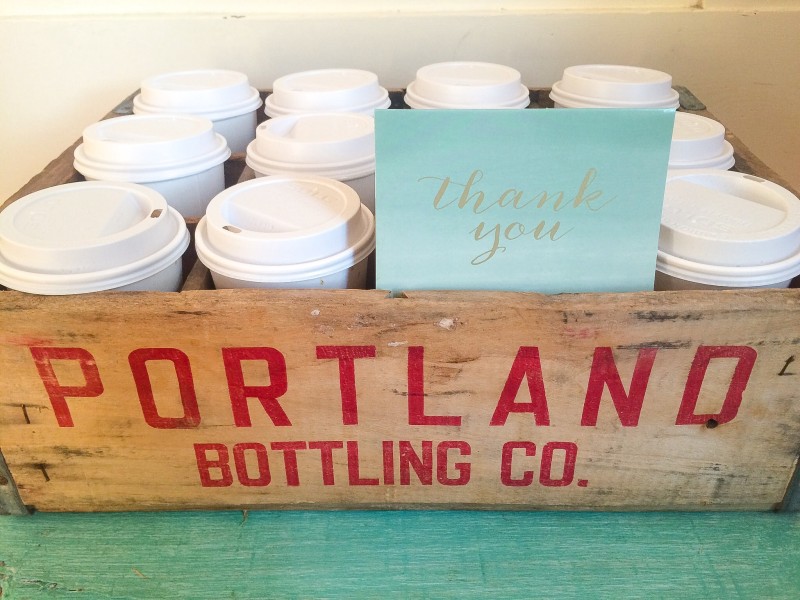 My own cup of gratitude overflows.