You are here: Home / Chicken / A CHICKEN ON EVERY GRILL: MOIST, FLAVORFUL AND FLAT-OUT DELICIOUS 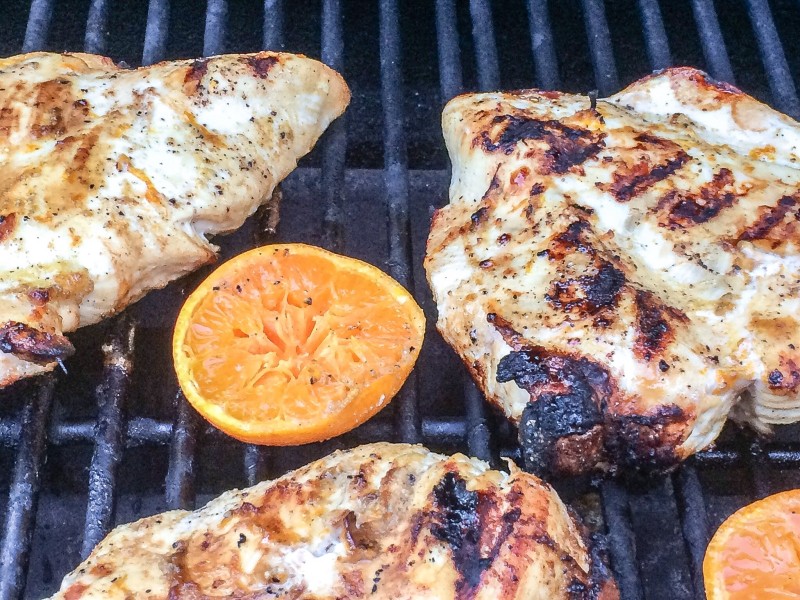 Let’s be honest: when it’s this hot outside, very few of us have the desire to turn on the oven.

But absolutely everyone I know has a grill outside, and just a few extra minutes of prep in the form of a quick marinade means the difference between blah, dried-out chicken and that which is a juicy, moist, powerhouse protein that can hold your interest for the days to come.

One night grilling, several days eating. Who doesn’t love that?

I usually end up grilling dark meat, but this week I thought that white meat would work better for what I had vaguely in mind for the next few days. I picked up some extra thick chicken breasts on sale and pounded them slightly so that the thickness (and hence cooking time) would be the same throughout.

I think breasts in particular tend to be a little bland and prone to over-cooking, so it’s hard to over-season with marinade. For last night’s meal, I whipped up one of my favorite blends: tequila and tangerines with a bit of both tarragon and rosemary atop at the end. 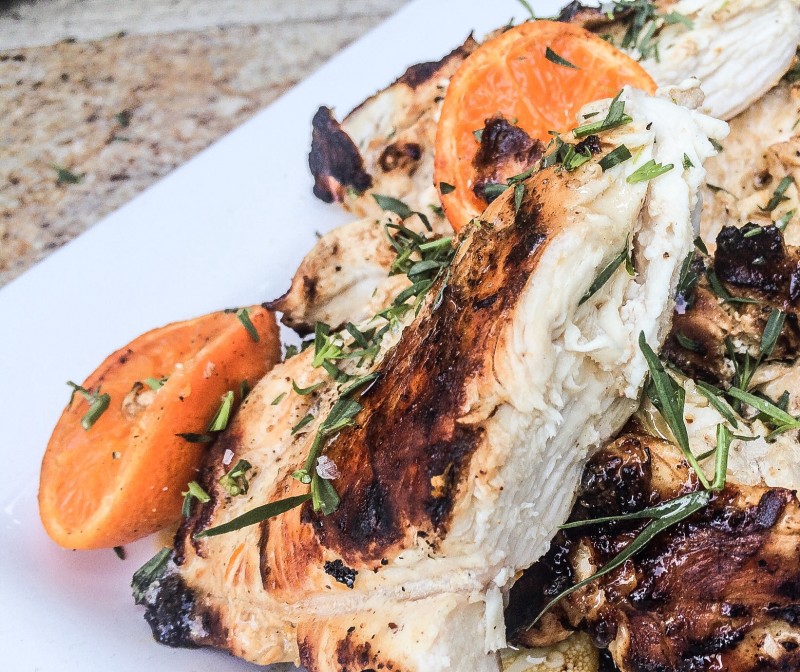 It was juicy, herby and the leftovers were killer tucked into a warm flatbread with grilled zucchini and white bean hummous.

I know we all recognize the importance of even a quick marinade when it comes to blander foods, but it’s all too easy to get in a rut as to the specifics, right? (I know one particular friend who says that she has never strayed once from her beloved Soy Vay Teriyaki sauce when grilling).

I too have to remind myself to mix it up, and tell myself that the end results will be dramatically different depending on what ingredients I use at this crucial beginning step (Stretch girl — there’s no reason for monogamy when it comes to marinade fixings).

Not just that, but how you season your chicken is like a road map; your marinade ingredients are likely to give you clues as to what accompaniments would be good alongside.

Chicken in particular goes well with almost flavors you’re likely to throw at it. 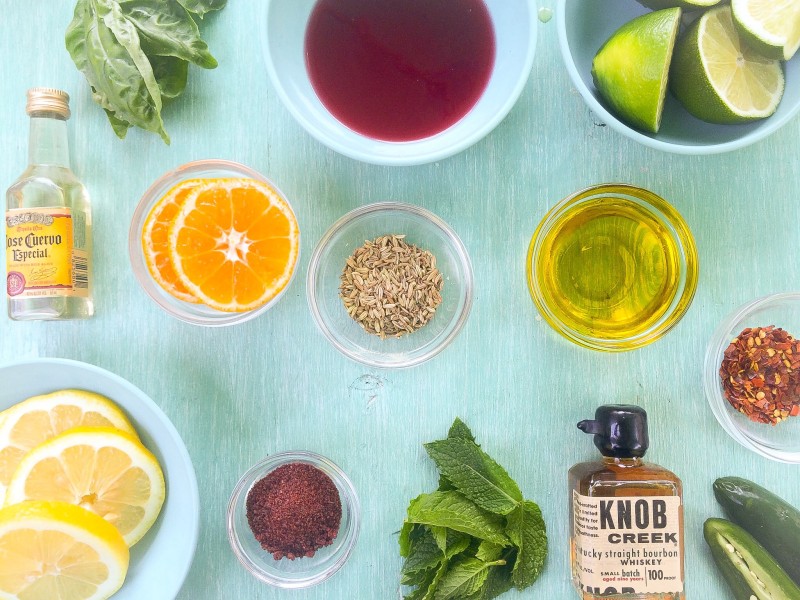 I usually pair some kind of acid (citrus of any kind, various fruit juices or a splash of vinegar like balsamic or pomegranate) with some kind of aromatics (pesto, Mama Lil’s peppers, minced green onion, tapenade, pureed ginger), a little oil (olive, sesame or avocado being the ones in greatest rotation) and salt and pepper with perhaps a little bit of other spices thrown in (cumin, smoked paprika, Chinese five spice or curry never fail to please).

Wine or liquor adds more dimension to the chicken, and used in small amounts, the booze will burn off as the flavor remains.

A good ninety percent of the time, I also add garlic, ginger and/or Sriracha/Cholula to one of the my marinades; there’s just something about the heat of either of these that works so well as a flavor booster.

Salt liberally both in the marinade and a little bit at the end (I like Maldon or smoked here), and never underestimate the power of fresh herbs or another squeeze of citrus at the end.

Here below are some of my favorite combinations for marinades. 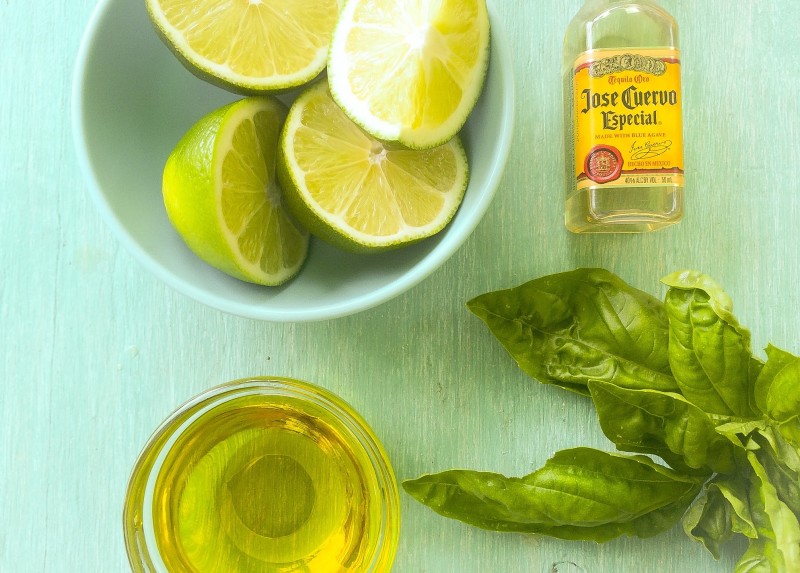 Use this marinade for chicken you might want to enjoy on the second night in burritos or enchiladas.

As with any marinade using a fragile herb like basil, mint, or cilantro, I use a small amount in the marinade but save the bulk of it for atop afterwards (heartier herbs like rosemary, sage, and thyme are in the marinade from the very beginning). 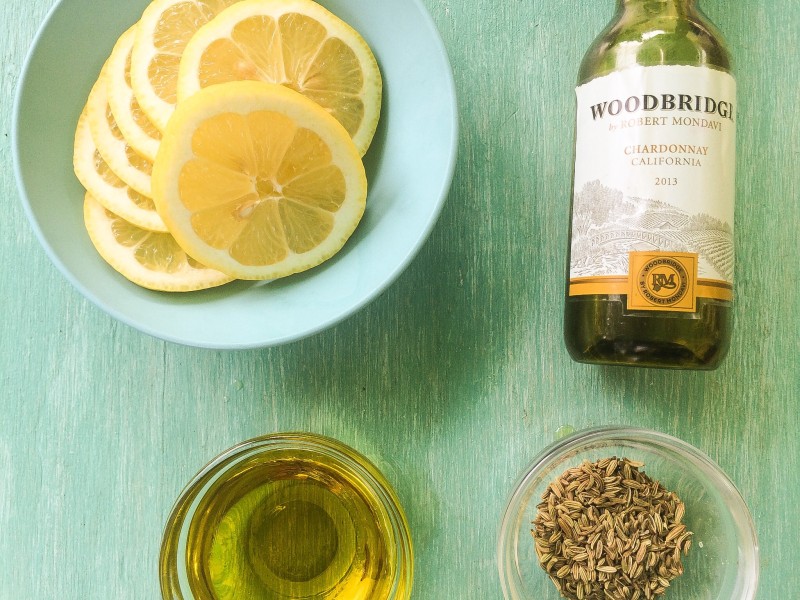 Here is a great marinade combination when you might want to enjoy chicken leftovers in leafy salads or tossed with white beans or pea and asparagus flecked pasta.

I like fennel both ground and whole — ditto anise seed, a close spice cousin. 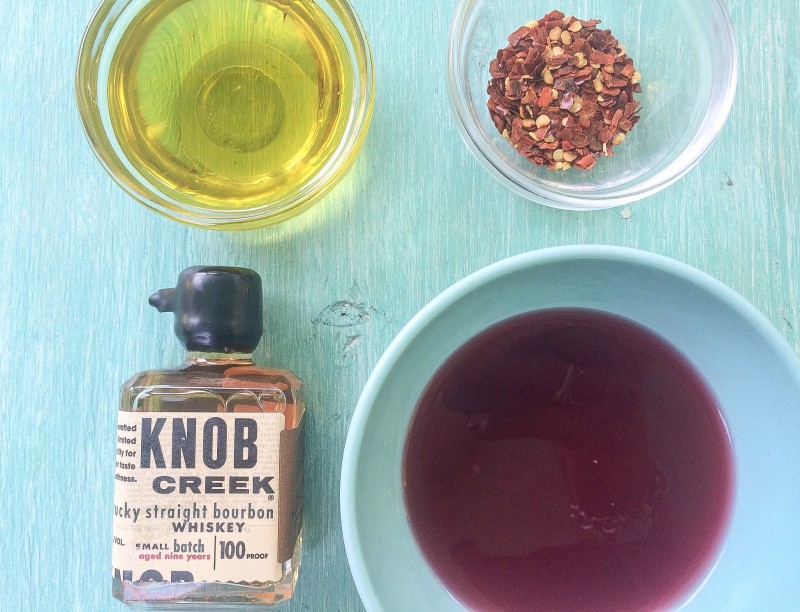 I think I would add some honey to this (and maybe fresh thyme) and use this for chicken thighs that might end up on brown rice one night but later find a home atop a warm spinach salad or tucked into a pita.

Bourbon and pomegranate pair so well together that I sometimes make an Old-Fashioned with just a splash of POM (Purists, relax — the world won’t come crashing down with a little cocktail adulteration). 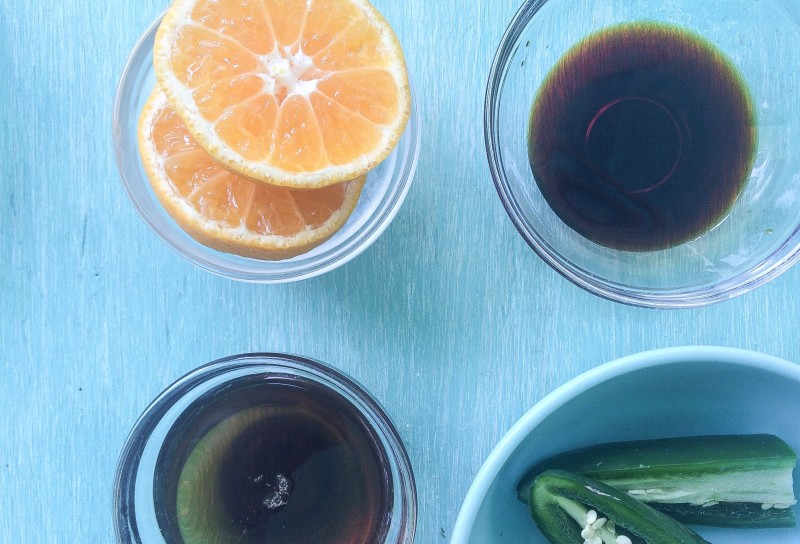 Ginger would definitely make the cut here as well and green onions are never wrong with these flavors.

Chicken given a leisurely dunk in this marinade would be great on its own or with udon or yakisoba. 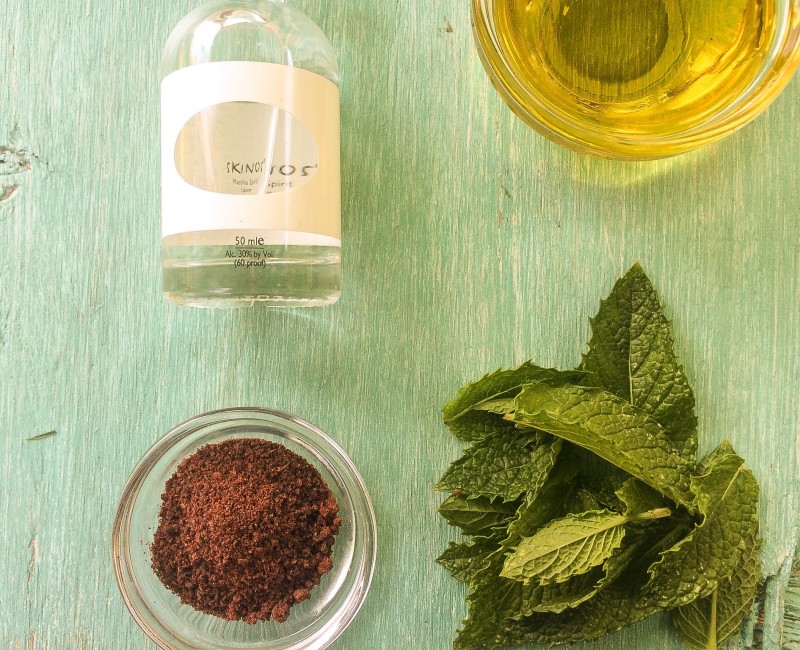 I adore licorice flavors and this mix is an interesting one — the sumac gives it a vaguely Middle Eastern flavor and the mint brightens it up both in the marinade and atop after it’s cooked.

Make this version when you are cooking up some couscous alongside your chicken. What an intriguing beginning to a wrap sandwich — perhaps with a generous feta sprinkle? 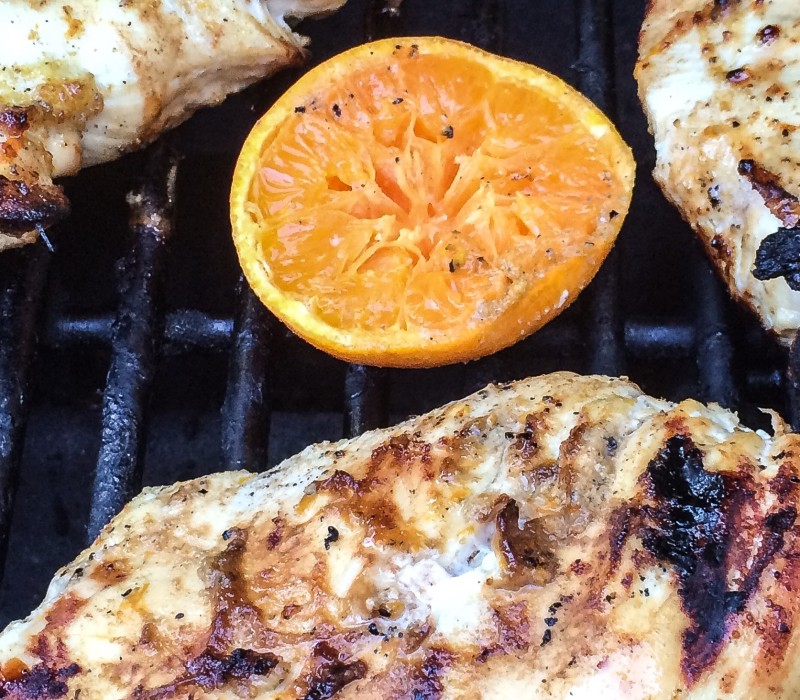 See how easy it is?

Just DON”T overcook it. Chicken is done at about 160-165 degrees, but if you wait to pull it off until it hits that mark, you’re a goner; the meat will keep cooking and then be overdone by the time you eat it (and leftovers will be woe-fully overwrought if reheated).

If I am making enough for two meals and I want to eat the chicken hot both times, I take that half for future nights off around 145 degrees and the current night’s off  when it’s about 155 degrees (more or less). Don’t forget — you can always cook your chicken more but you can’t remedy it if you’ve gone too far.

No one likes that walk of shame to the dinner table as you try to ply loved ones with overcooked chicken. Big time bummerville.

So mix it up and get grilling. And take my word for it — you’re going to want to make enough for multiple meals.

One night, you’ll huff and puff outside, but day two and even three means you can sit pretty– and hopefully cool– come dinnertime, relaxing in the comfort of knowing that goodness already awaits you. 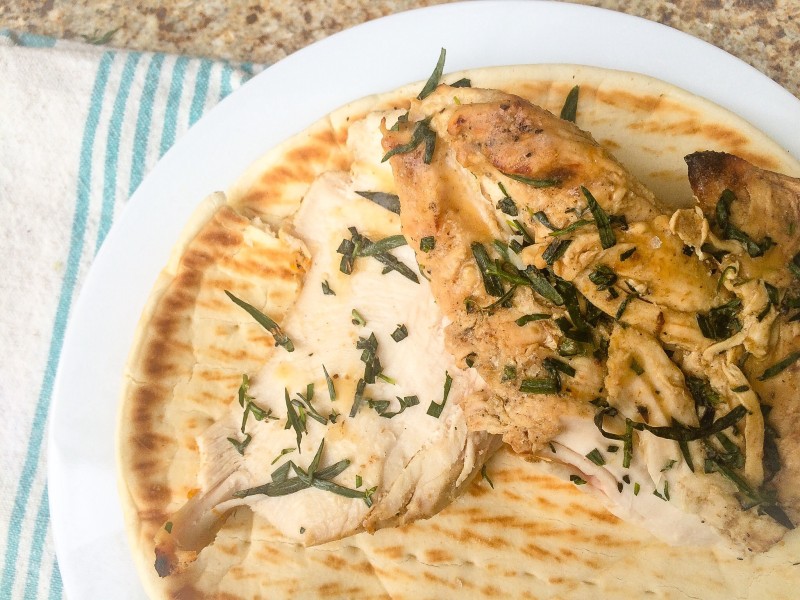