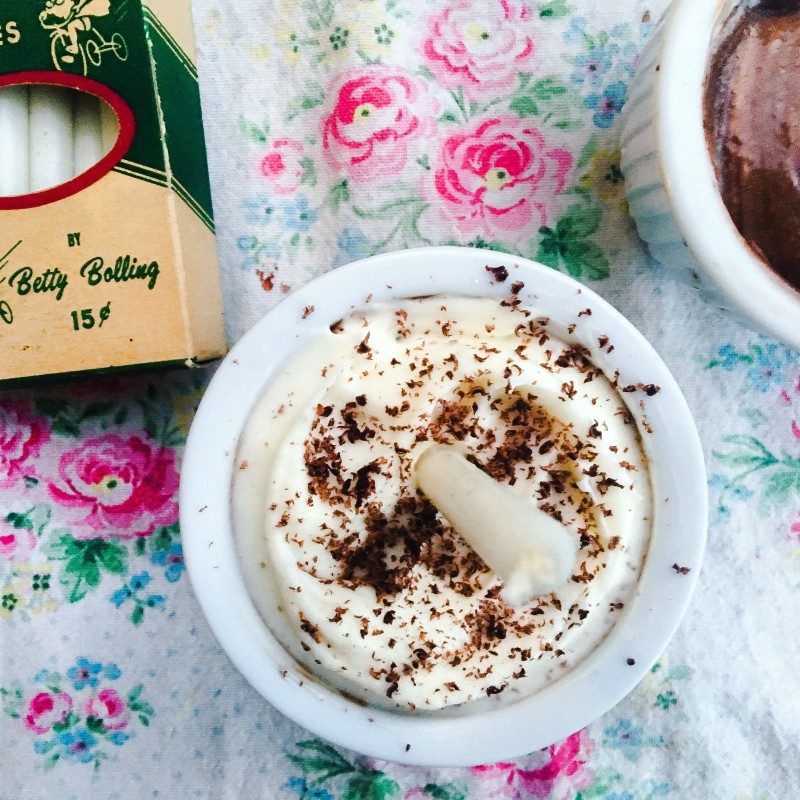 When summer birthdays roll around, do you really want to turn on that oven (and heat up your kitchen) to bake that cake?

Don’t get me wrong, I’ve made plenty of cakes in my time 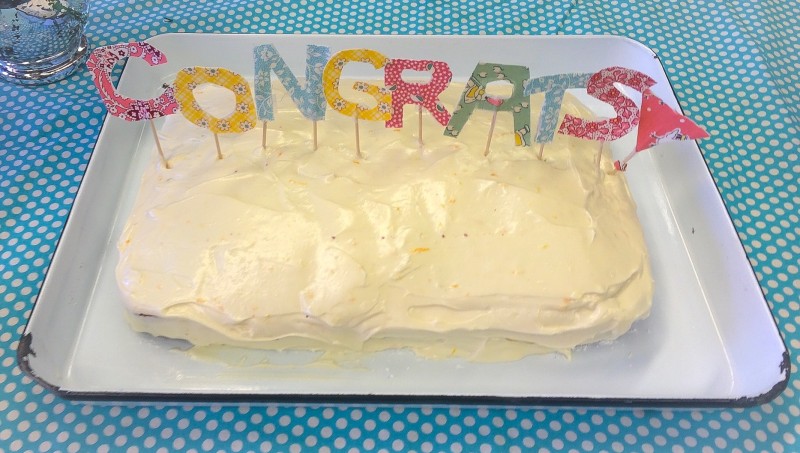 and while they are usually pretty tasty,  there’s something kind of anti-climatic about them. Is it just that they are so expected? Or is it the fact that there are so many wonderful ones out there for purchase that make most homemade efforts dim in comparison?

Me, I’m more competitive than most, and so I’m never going to like the  odds of my cake vs. professional cake in a beauty contest, and if I am going to do something special for a family member’s b-day, I want it to stand out.

Like “Oooh. You made me chocolate pots  de creme for my birthday? I’m sooo excited.” 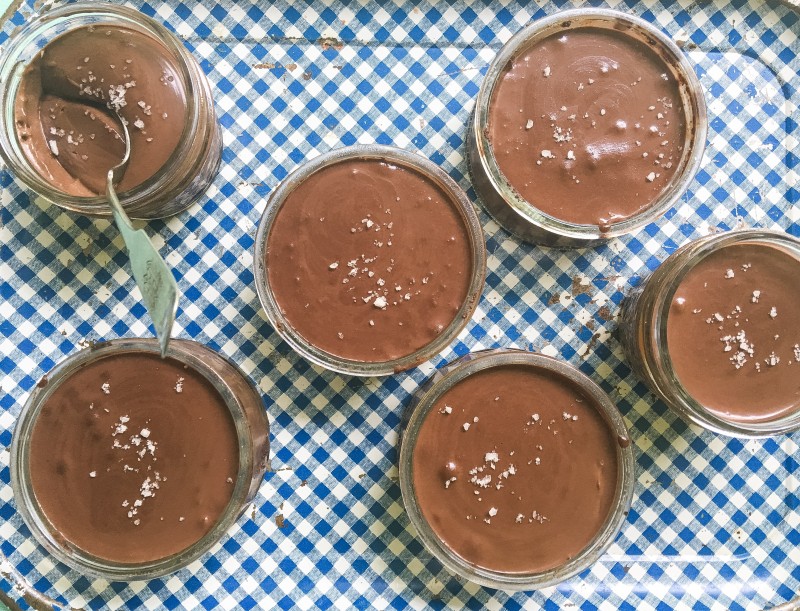 Think a sheet cake is going to get me that kind of reaction? Or even a chocolate layer cake?

No. Those cakes can be wonderful in their own right, but not for me and birthdays. These special occasion desserts need to be different. 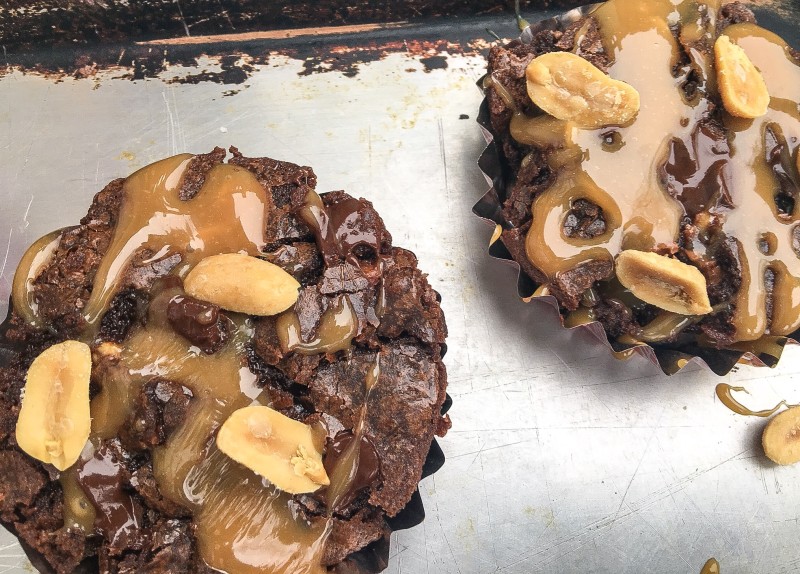 And here’s one other thing that no one seems to talk about as a key component of a special birthday treat.

Birthday treats need to be INDIVIDUAL. 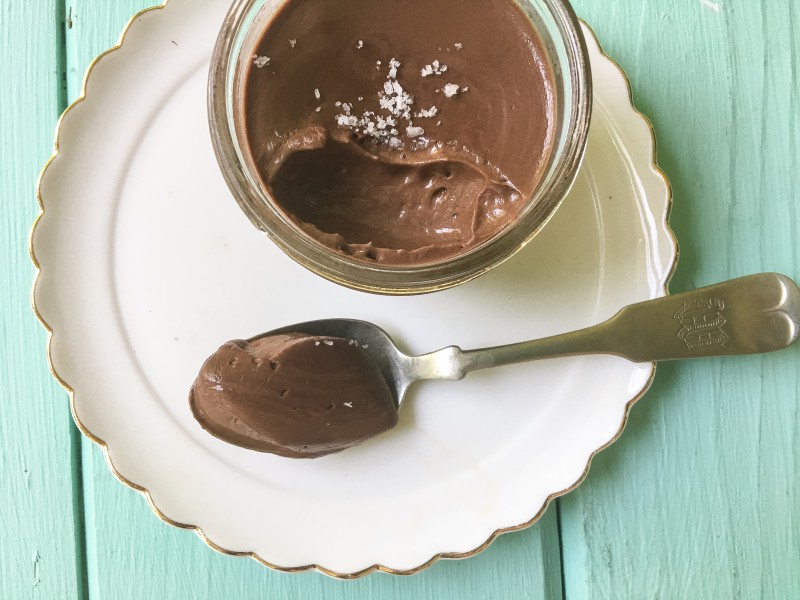 I’m a huge fan of individual desserts whenever possible; it allows the recipient to determine the pace in which it’s eaten and ensures the sameness for all.

Feel like eating it super slow while others plow through it? No problem. Remember last time getting  stuck with a middle soggier piece of something while others enjoyed the crispier edged ones? No worries here. Everyone has the same — and it’s their choice as to how and even when to eat it. 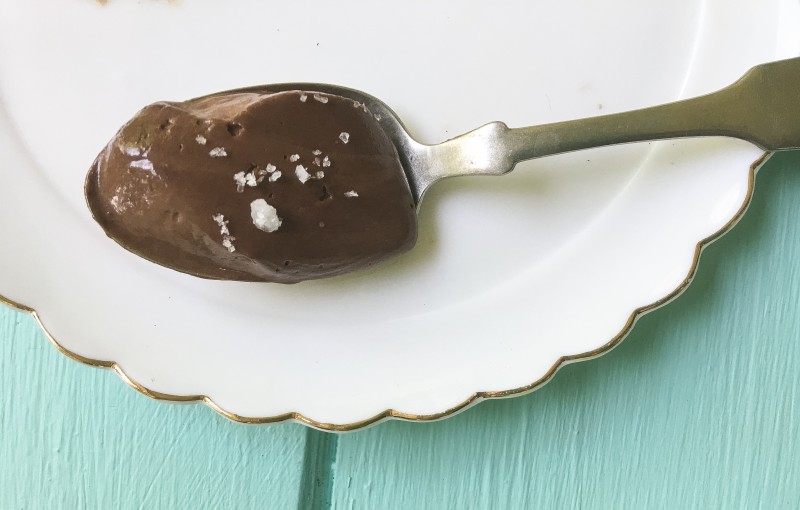 So when I was trying to think something of something special for my hubby’s birthday yesterday, I thought about making another pot de creme (both chocolate and caramel cremes are favorite around here) but then I came across a recipe from the Saltie cookbook I’d borrowed from the library.

I’d picked up the book on a whim, not knowing a thing about this cult-favorite Brooklyn restaurant, but I was drawn to the pics and simplicity of the recipes.

And one in particular had caught my attention when I’d first checked it out: 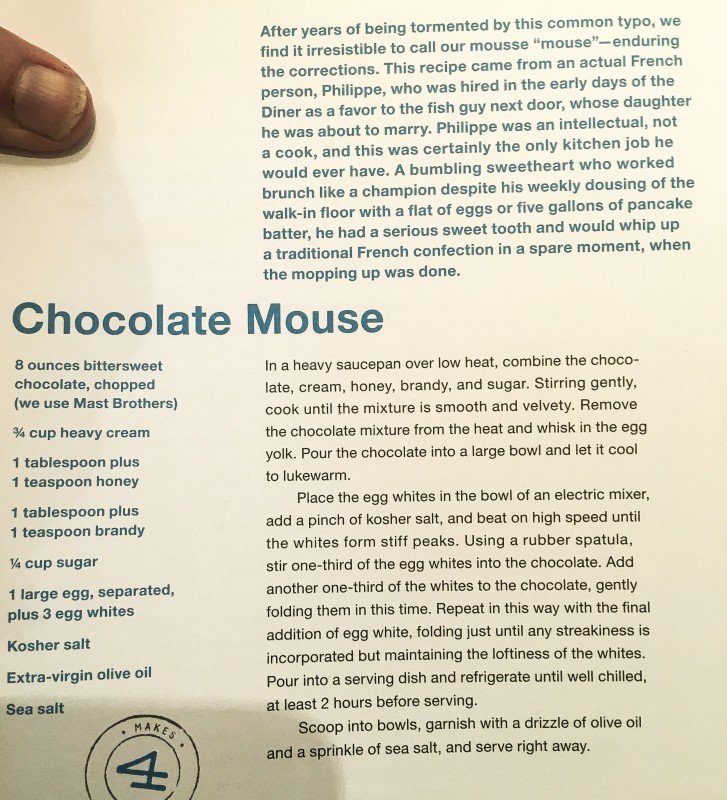 I haven’t made a mousse in ages, and thought that this extra-decadent dessert could be made early in the day and the fact that I didn’t need to turn on the oven once won me over.

I got to work. 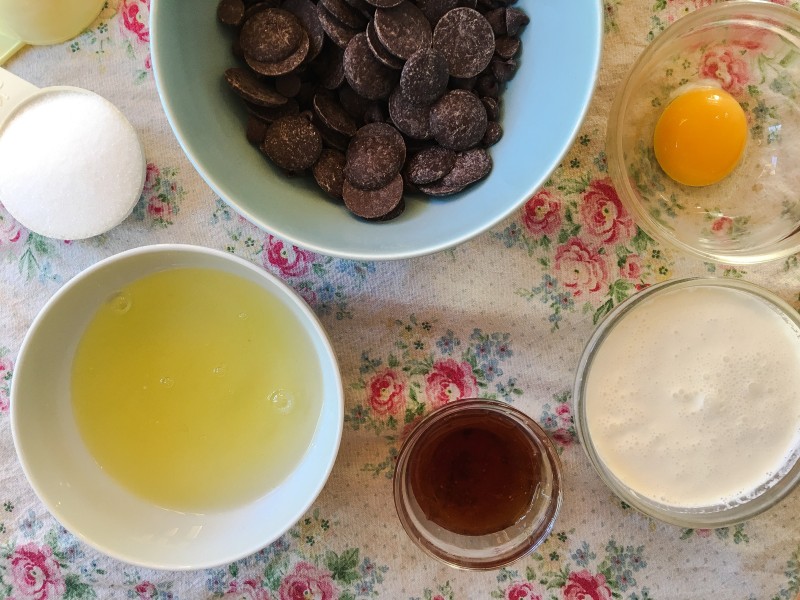 It’s a simple list of ingredients — egg whites and one egg, honey, sugar, cream, chocolate (I used mostly bittersweet coins with a few semi-sweet chips thrown in) and I omitted the brandy and added in the same amount of orange extract.

You melt the chocolate, cream, honey and sugar together over low heat 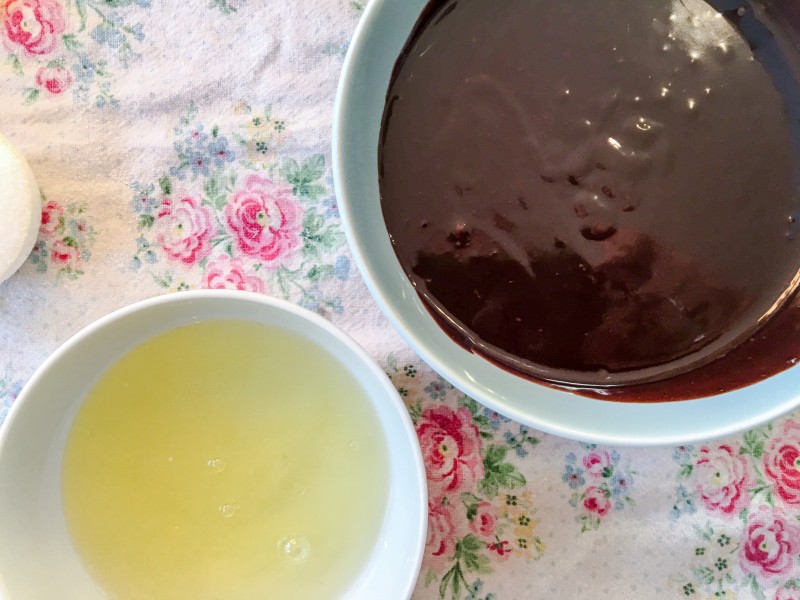 and then you take those egg whites and whip them into stiff peak submission. 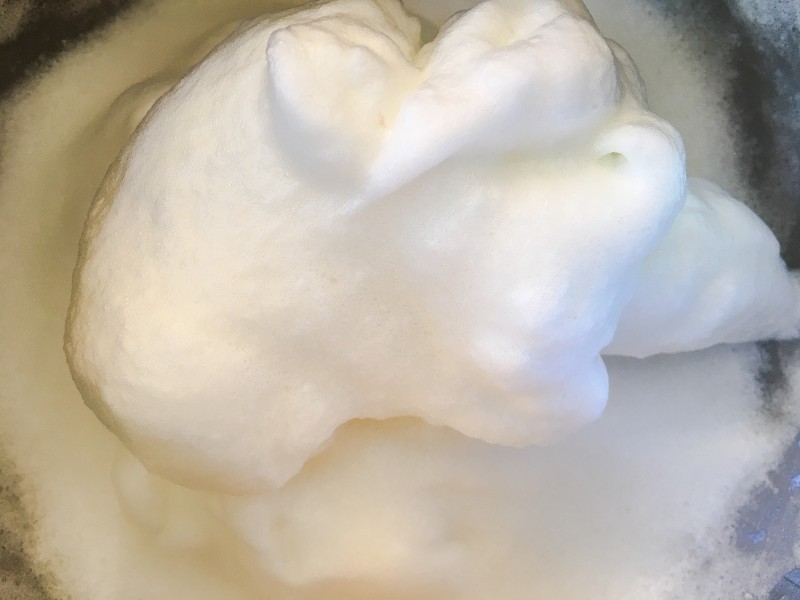 You then fold the egg whites into the cooled chocolate mixture. I was a little worried at first because it looked a little streaky with a little bit of the egg white bubbles inside, but I trusted the recipe and into the fridge it went for chilling. 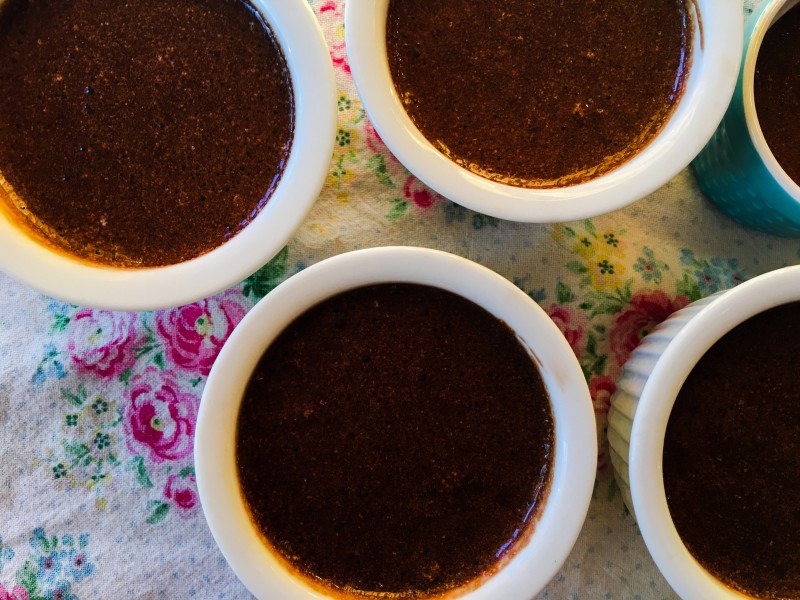 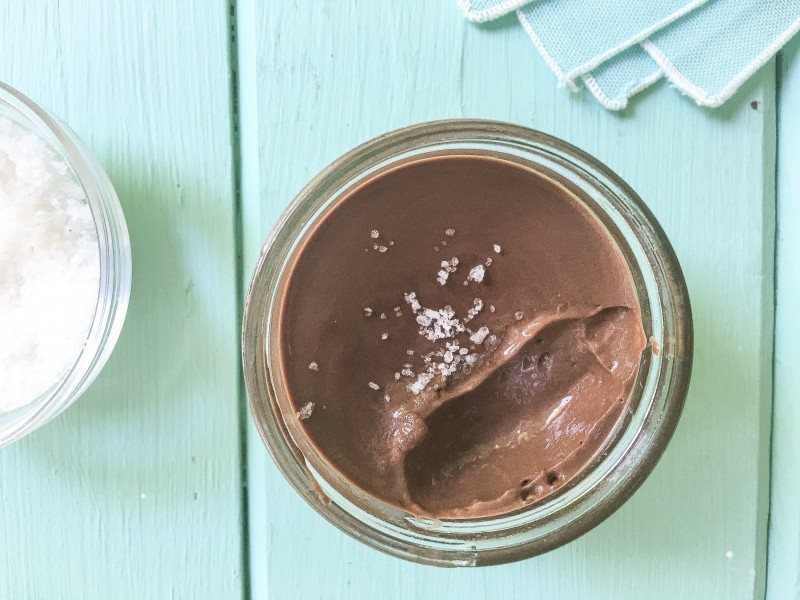 While it’s hard to beat the silkiness of the latter, the mousse was far chocolatier and yet lighter in texture than the pot de cremes. Without the distraction of so many egg yolks and cream, the intensity of the main ingredient comes through, as if on a punched-up chocolate orange cloud.

They may not be as pretty to photograph as custards, but the flavor was divine. My husband said it was one of the best desserts he’s ever had in well over a half century of living.

So thanks to Saltie for the recipe and happy birthday, baby — may your days be healthy, long and filled with many more treats yet to come. 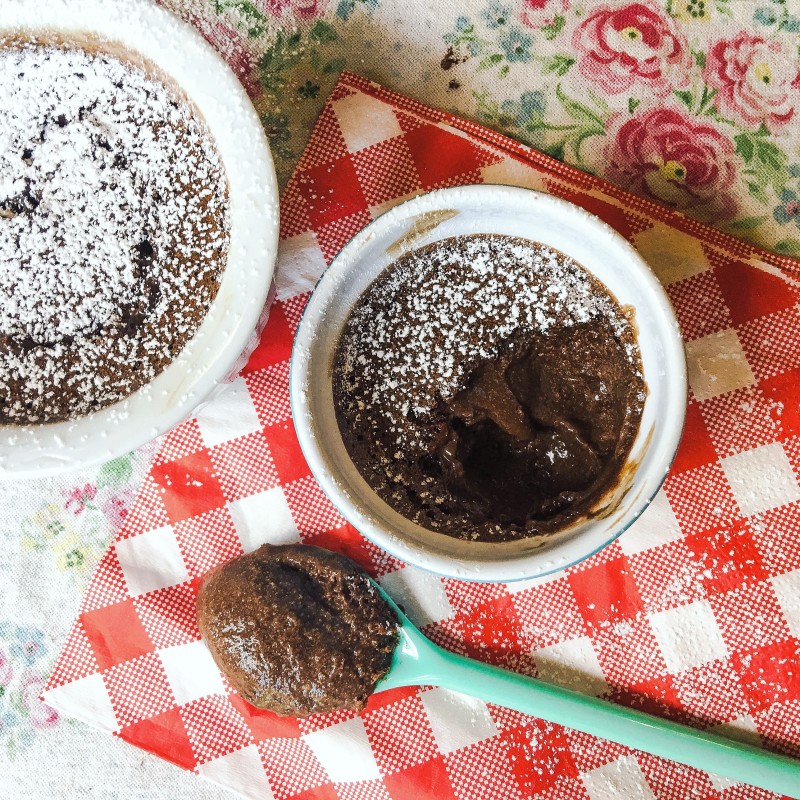 As long as I’m around, I’m happy to help with the latter.

Print
Prep time
15 mins
Total time
15 mins
These were so easy and such an unexpectedly luscious treat. I added in orange extract instead of brandy and next time I think I'd add a Tbs. of cocoa to the cream to up the chocolate intensity even more.
Author: Saltie Cookbook
Recipe type: dessert
Serves: 4 servings
Ingredients
Instructions
3.2.2925

« SUMMER DAYS AND FUN ON THE FOURTH
MID-SUMMER BLOCK PARTY »