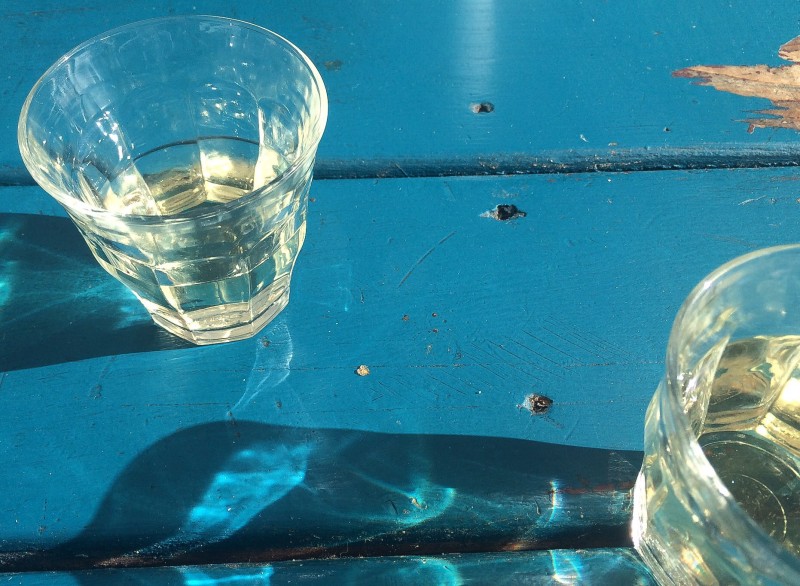 What happens when a talented cook is truly given free reign to make the food of his imagination without restraints or a nod to convention?

You end up with Carte Blanche Food Cart, the crazy food experiment delivered from a vintage Airstream trailer at 32nd and Hawthorne. 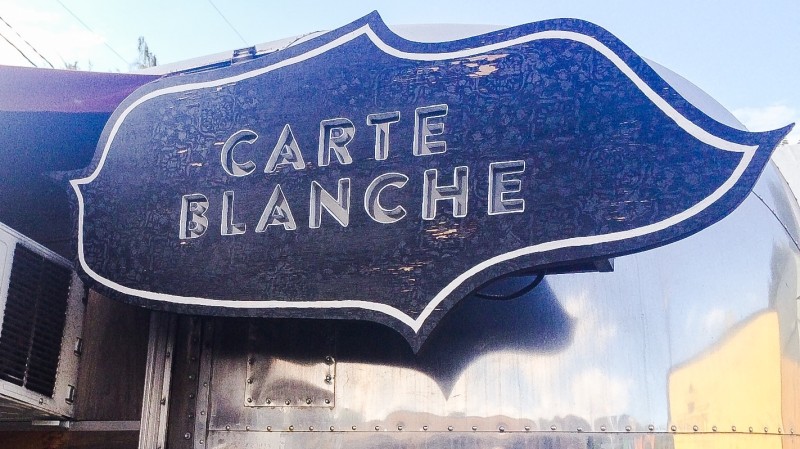 I read somewhere that the owner of the cart, Jessie Aron, successfully raised funds on Kickstarter to get his cart back in action; he’d temporarily closed the cart when money was needed for repairs and various operating costs, and the prospect of a winter season without upgrades was untenable.

Clearly those backers had tried his food at some point and were willing to put money where their mouths had been.

And so armed with a couple thousand dollars over his goal, Carte Blanche was back in business on Hawthorne. 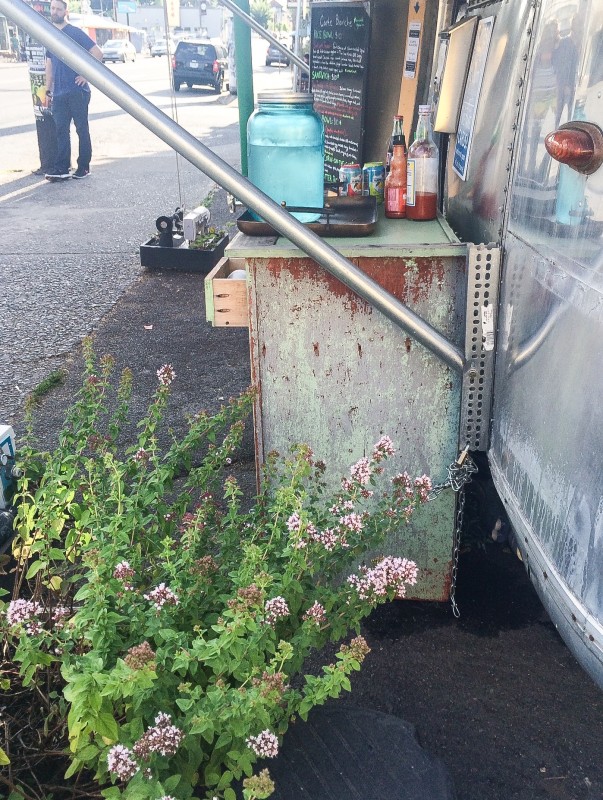 Sure, I’d read the rabid reviews, but I had yet to partake until last night.

What I found was food that seems like it flies off the plate and into your craw only to detonate in your mouth in a synapse-firing glory.

But a word of caution; at first, Carte Blanche is the kind of place that might have you scratching your head.

It’s a globe-trotting adventure, and you never know ahead of time where the road may lead.

Don’t count on a big selection (they usually have just three or four things) and if you fall in love with a certain dish, don’t get your hopes up that there’ll be a future rendez-vous with this particular beauty– it’s likely she’s moved on. 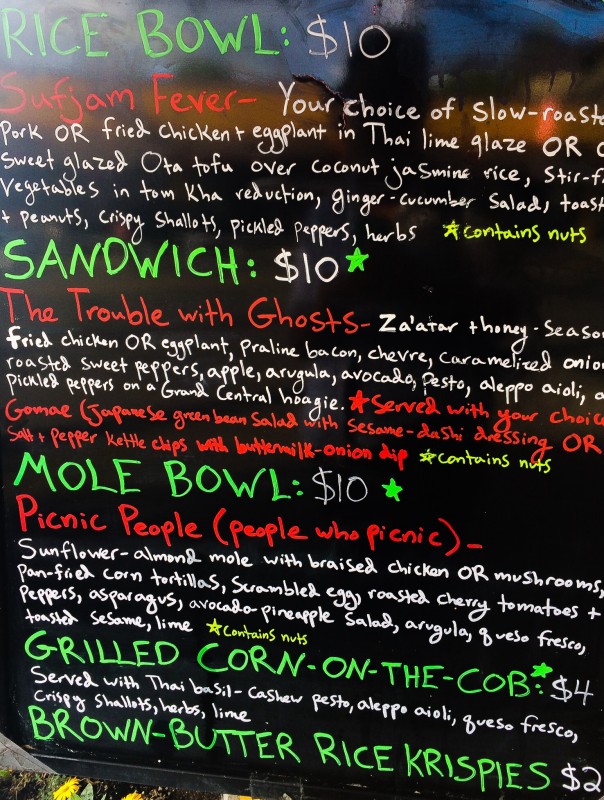 But not to worry; I’m convinced that in the hands of such prodigious talent (and surely equally talented co-workers), everything and anything that you order will be compelling and drop-dead scrumptious.

Last night as the thermometer flirted with the over-eighty mark, we ordered three of the four savory items offered.

I had the genius idea of smuggling around mini bottles of  ice-cold chardonnay in my purse, so the short wait was a pleasant one at the picnic table behind the cart.

First up the grilled corn. 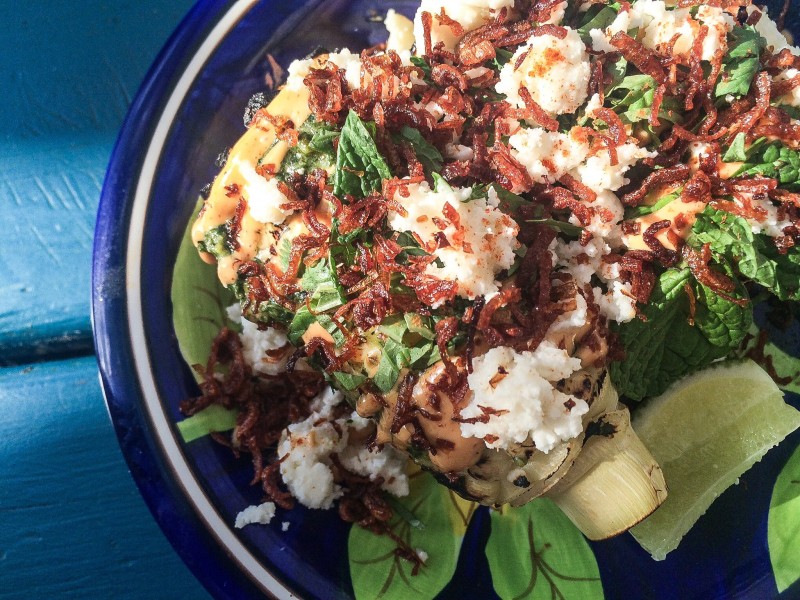 It may be hard to believe, but there are two corn halves in there.

It’s like one of those Where’s Waldo? books — you just to train your eyes to find the little detail hidden in the midst of so much color. 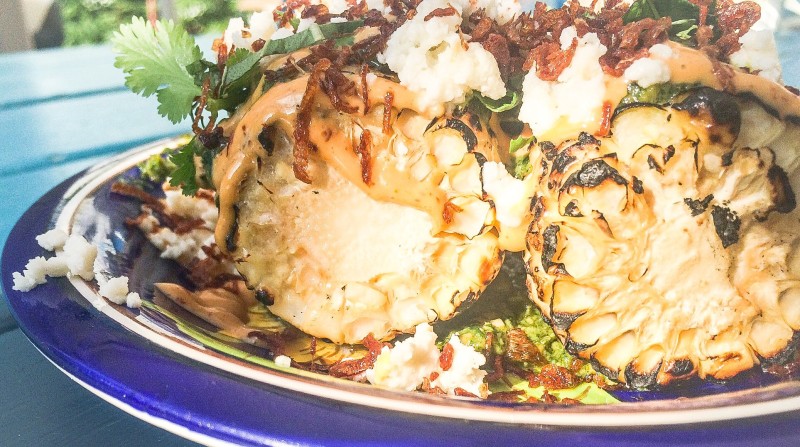 When I first saw the dish I was a bit skeptical because the corn was buried under so many toppings, but amazingly all these add-ons worked gorgeously together. 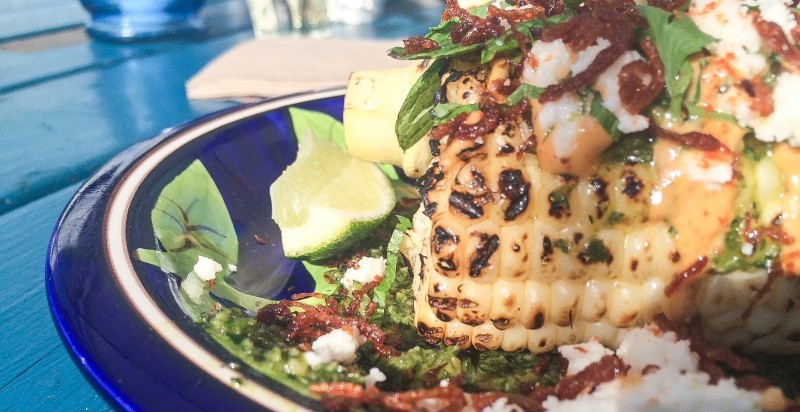 It was a hot mess to eat but a foghorn of flavor to take in.

When we polished off the corn, we were sure to eat every last bite of topping afterward (I am so going to try some version of this at home).

Next up, a rice bowl called Sufjam Fever. 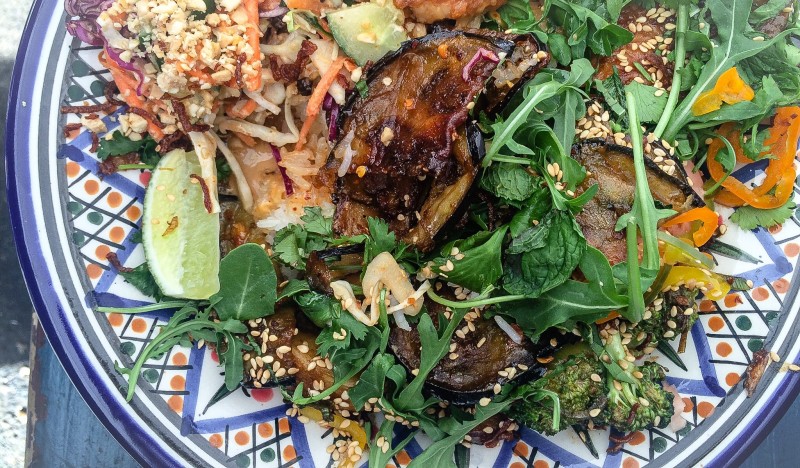 Again a blowout of tastes.

Fried chicken and eggplant are the meat and potatoes of this Thai-inspired dish, with coconut jasmine rice, stir fried veggies, a ginger cucumber salad, peanuts, sesame seeds and crispy shallots jumping in for good measure.

Hey, everyone in the pool.

My husband hates eggplant, but he couldn’t stop extracting crispy pieces of the vegetable for personal consumption. Normally that would annoy the bejeezus out of me but I was getting so full that I couldn’t get mad.

Go for it. This time. 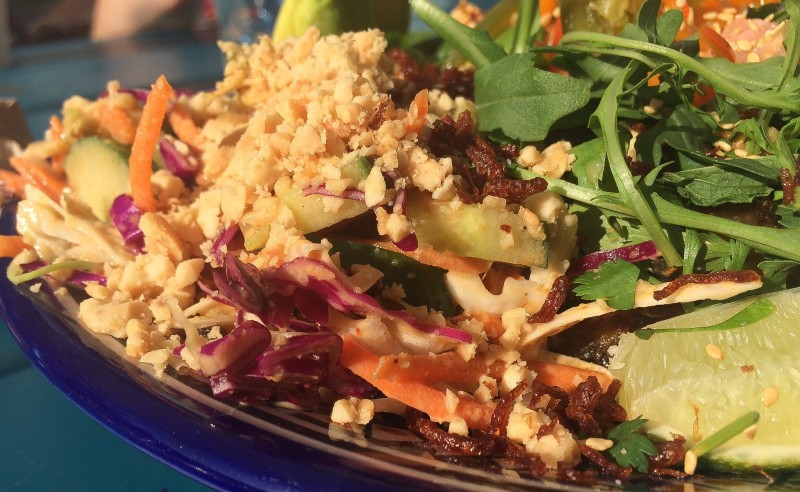 This was a marathon, and we were barely half-way through.

And as good as the Sufjam Fever rice bowl was, this was probably even better. 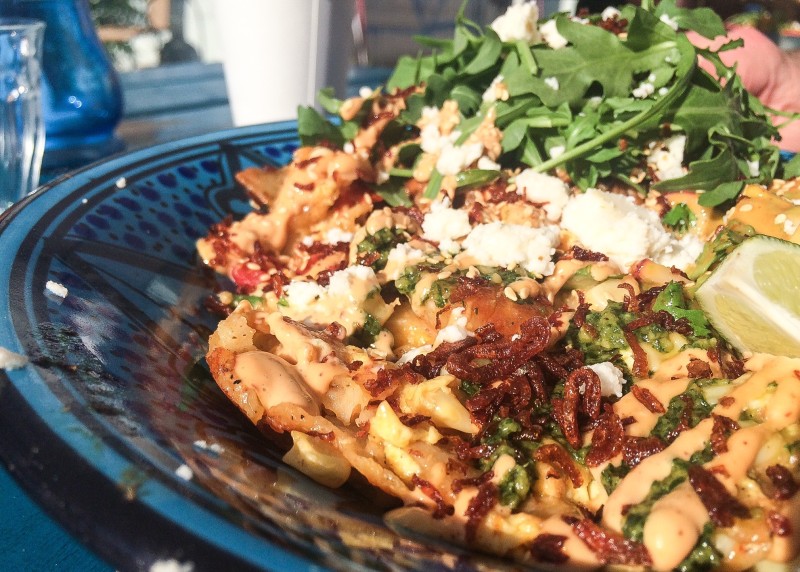 Oh, and I guess that the cook didn’t think he yet had our attention so he added in an avocado-pineapple salad and queso fresco to make sure we were still with him.

Carte Blanche might be guilty of near-drunken abandon with ingredients and flavors, but somehow the cooks dangle you on the precipice of self-indulgence and arousal — but then grab you back with all those complementary flavors and the flawless execution of their sauces.

(Carte Blanche, I wish you had been around when I was in college — many a night blunted by sub-par temperatures and full-on beer haze would have snapped back into immediate focus in the plentiful wake of such focused and abundant flavors.)

Okay, CB, you had me at Airstream, but you kept me enthralled with your food. And only talents as enormous as these — and with obvious heart to match — should truly be given carte blanche with your taste buds.

So here’s to you guys at the Carte Blanche food cart — you’re crazy dreamers and I love the boldness of your vision.

And I salute every one of those Kickstarter contributers that got this food cart back in action.