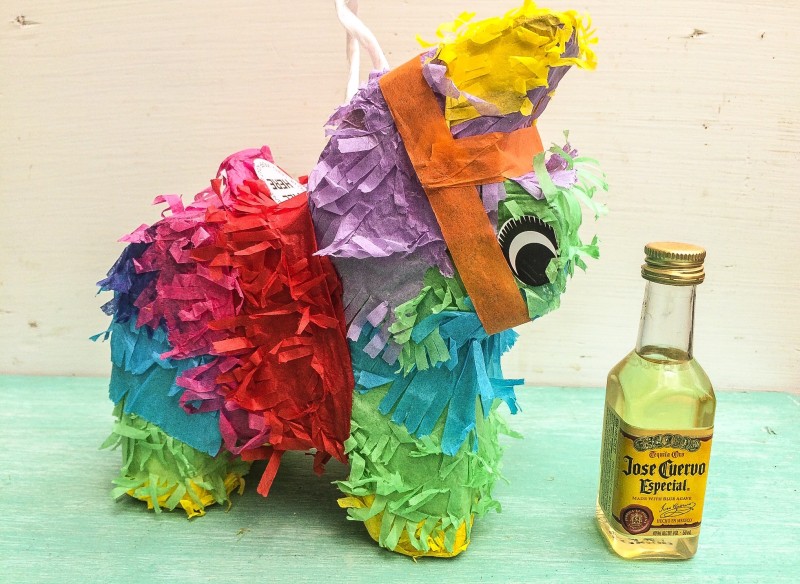 It’s that time of the year again.

It was Charlotte’s turn for a birthday party this week. You’d have thought that she was planning the D-Day invasion for the amount of planning she put it into and no detail was too small to discuss, debate, deconstruct. (Perhaps she will be an event planner when she grows up?).

Dress up/dress down? Which games, and in what order? What to eat? Crafts vs. movie?

(Picking the invite list was easy — she wanted only her very closest friends and not a big hoopla).

It may come easily for her, but party planning is a little trickier for me.

Sure, I’ve hosted fantastic birthday parties, like the time I had the ice cream truck surprise Oliver’s friends with a custom-drive by inside the park and told them to order whatever they wanted. Home run.

But I’ve also had some epic birthday fails. The most memorable blunder was the the time I made the uber-fancy, four layer Valrhona chocolate cake for two year olds and because it was 95 degrees and they were toddlers, they completely ignored the cake and only wanted more ice cream (which I promptly ran out of).

I can’t even think about the latter without getting teary, not just for the loss of that cake but for my ridiculous over-reaching for two year olds. What an idiot I am sometimes.

That was then, this is now.

Now I know that with kid’s birthday parties, SIMPLE wins every day and all you need is just enough razzle dazzle to make it memorable.

Here are my Five Tips For the Best Possible Kid’s Birthday Party.

Ignore at your own peril.

1. Feed your own kids something protein-rich before the party. And if it’s hot out, hydrate the heck out of them while you’re at it. 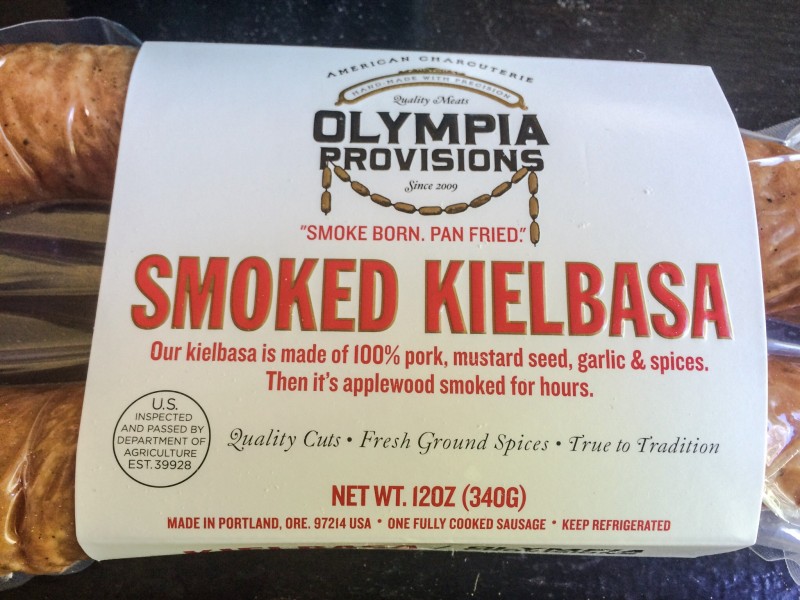 No matter how much you try, there will so much excitement (and probably sugar) that your kids are likely to peak out early. If you’re in charge, even more so for you.

This year protein on Charlotte’s birthday was easy; I had just bought some amazing Smoked Kielbasa from Olympia Provisions at the farmers market and I sauteed that up. Alongside we had carrots and a little rice and I’m convinced that we were all a bit better off for it for the big protein intake.

This was some of the tastiest smoked sausage I’ve ever had. Olympia Provisions, you rule.

2. If you are making a meal for the party, make it as easy as possible. 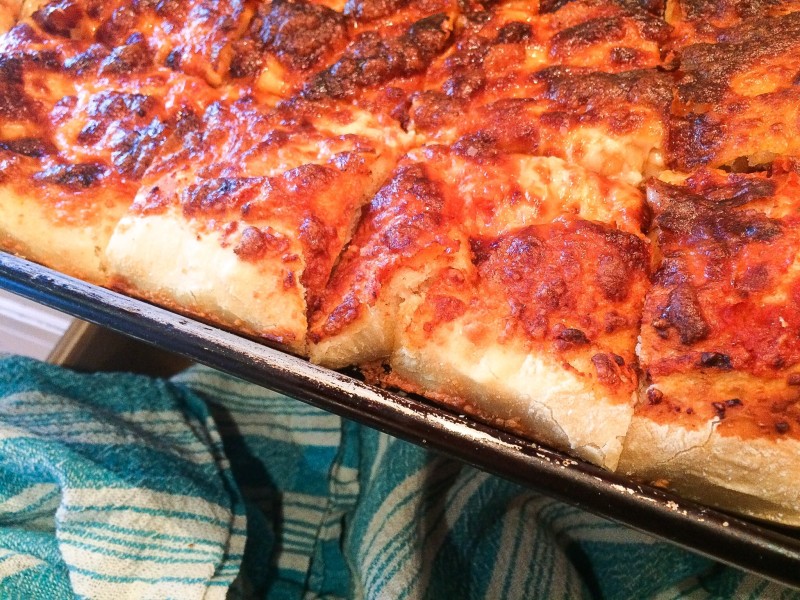 We’re talking pizza, sliders, pasta — nothing fancy.  And don’t be afraid to nab those shoulder hours (say 1:30-4:30) if you just can’t wrap your mind around offering a meal to a possibly unruly crowd.

For C’s party, I just made a big sheet pan of homemade pizza and then cut it into tiny squares and put it all on a giant tray for them to help themselves (along with watermelon and cherries).

I also saved a few squares for her to enjoy reheated for lunch the next day. That also gave me a chance to remind her of the party and that her mom is a goddess and is really rocking the maternal game.

If you’re not reminding your kid later about the party, you are missing an opportunity to ensure (a la Inside Out) that this memory gets stored in the permanent file. Not only do you want them to have lots of happy memories of childhood, but just remember this. Your kids will probably be in charge of your end-of-life care.

Don’t you want them to remember you fondly as the delivery system behind homemade layer cakes and fun parties when trying to decide what kind of place you’ll end up in?

Am I saying that great birthday parties might ensure more humane treatment in your diaper-wearing years? 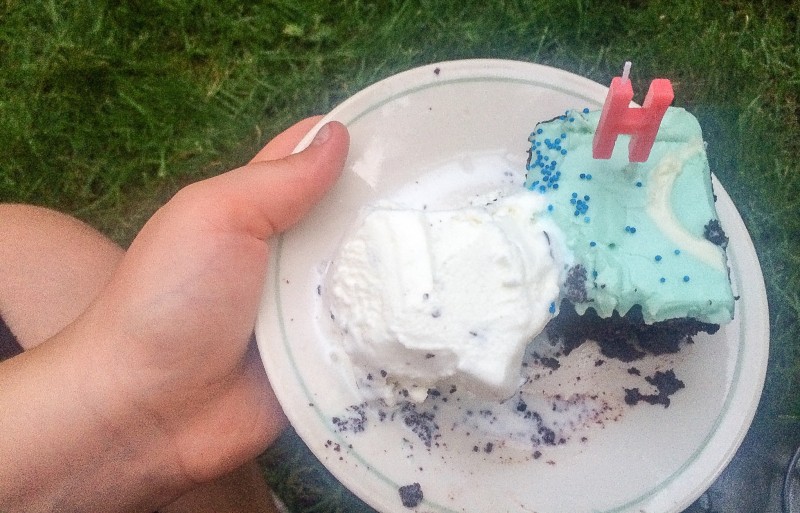 Back to meal planning.

If you do want to make a dessert, again, the simpler the better. A sheet cake (either purchased or homemade) is optional — just the right size and plenty of room for sprinkles. Bonus points if you serve the cake a la mode. 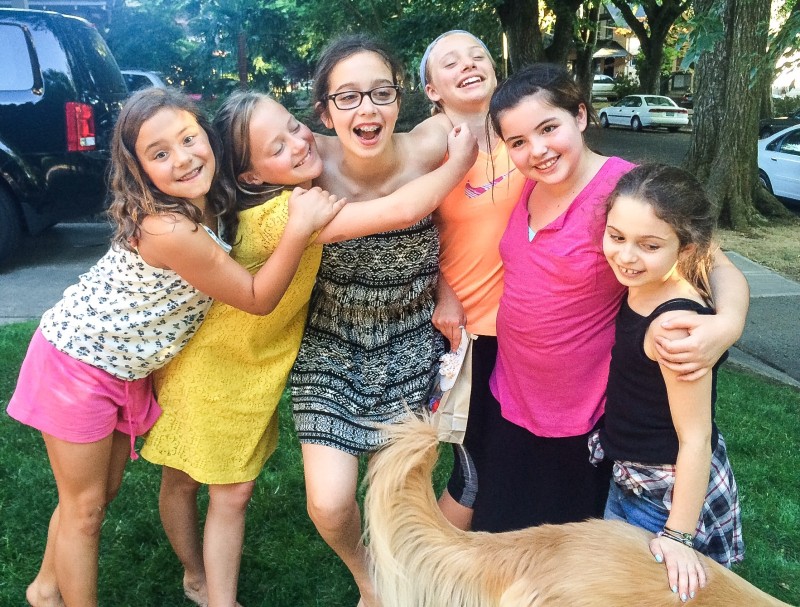 Don’t get fancy with games and entertainment. Charades, Scattergories, even a big card game are great here. Or that egg toss game. Or Capture the Flag. Or manicure shop.

Just don’t plan on any activity lasting longer than a spouse can rub your shoulders without fatiguing. And plan accordingly — have the next game at the ready. Kids without a plan at a party is just asking for trouble and trouble in any form is the last thing you want here.

If you are thinking of spending money on entertainment, stop. You’ll probably blow your budget for #4.

4. Pinatas are a must, but do so wisely. 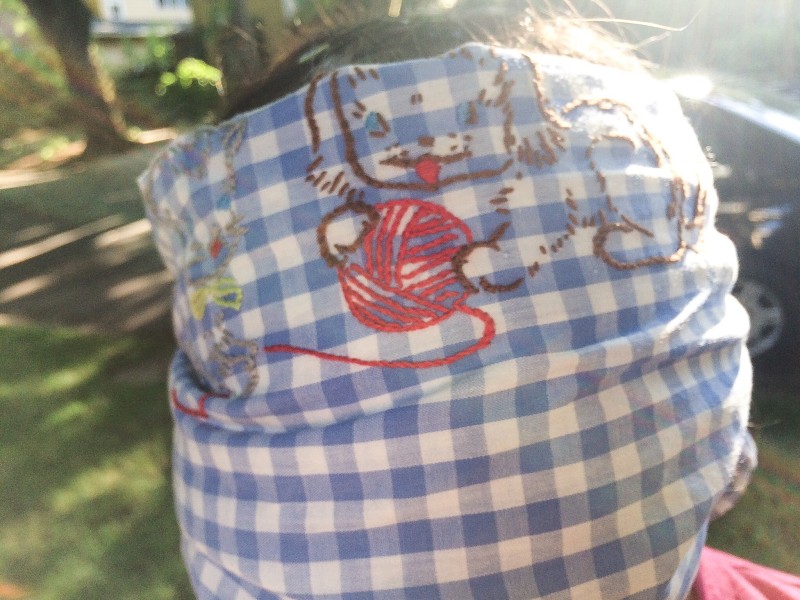 (Doesn’t Charlotte with a vintage dish towel to cover her eyes while swinging the bat look spooky? Perhaps lack of oxygen is why she ripped it off just moments later).

Something about beating the hell out of a cardboard figure and then racing after its sugared entrails never fails to please.

But let me tell you; I’ve probably provided a pinata on two dozen different occasions (birthday and block parties and a couple memorable dinner parties) and I know that there are two ways it can fail you.

Problem 1: kids are going to stress about where they are in line.  Either they are going to miss the chance to crack it open or worse yet, be left in the dust while the bigger, more aggressive kids get all the candy.

Lack of candy — or perceived lack — is a deal-breaker for a lot of kids. When there is an uneven candy distribution, you just see the light go out in their little eyes. Suddenly those little faces in your yard mirror the ones of those chained dogs on that ASPCA commercial that kills me every time. No hope. Only Sara McLaughlin.

Solution: Tell them at the outset that all the candy will be divvied up afterwards so that it is distributed evenly. Trust me on this– unless you want your yard to turn into the next Altamont, do as I say. Tell those greedy little candy suckers early on that stampeding won’t result in more Pixie Sticks. So be nice, you tell them, or you’ll get first dibs on the Mary Janes and Peanut M and M’s.

Don’t get me wrong. They can scramble around after the pinata is eviscerated and hunt and gather to their heart’s content– that’s half the fun of it. I am just saying that it pays to make sure that everyone gets their fair amount of candy, and if you need to re-distribute candy to ensure harmony, do it.

“No tears on my watch” should be your motto.

Problem 2: Pinatas are huge. It takes a lot of candy to make a big impact.

Solution: Fill that cardboard donkey, Barbie, or Minion to the rafters. Don’t even bother to partially fill it; that’s beyond lame and your kids on their dying beds will never forget your candy stinginess.

Don’t be a candy tease; best to skip it entirely if you aren’t planning on going all the way.

Cheer up. Mix it up with greater volume treats like individual sealed bags of pretzels, goldfish, chips, gummies or granola bars in addition to candy.

Speaking of which, be sure the candy you put in the pinata is really good stuff. Not sure? Is it something you want to eat? Smarties and Pixie sticks are the exception and are always a welcome addition in pinatas. 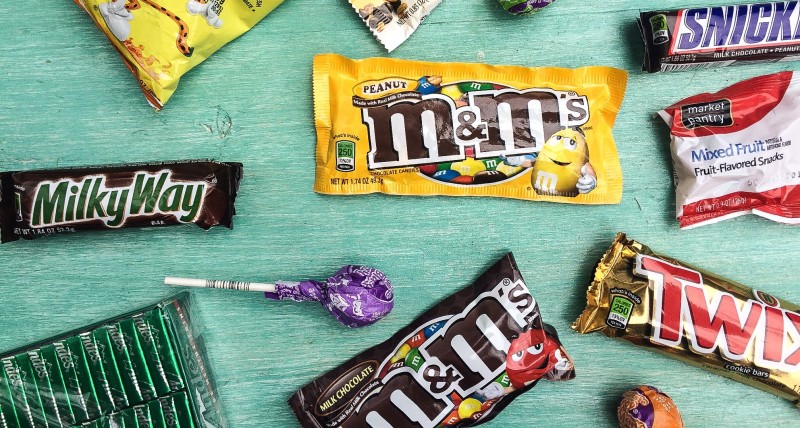 Things like these are also a big thumbs up. Things like raisins or any granola bar that has more nutrients than a egg white and spinach frittata is definitely not okay.

If I ever hear any of my friends have put something stupid like hard candy or icky lollipops in a pinata, I will slap them something silly and give them what for.

5. It’s all about the party favors. Make yours matter. 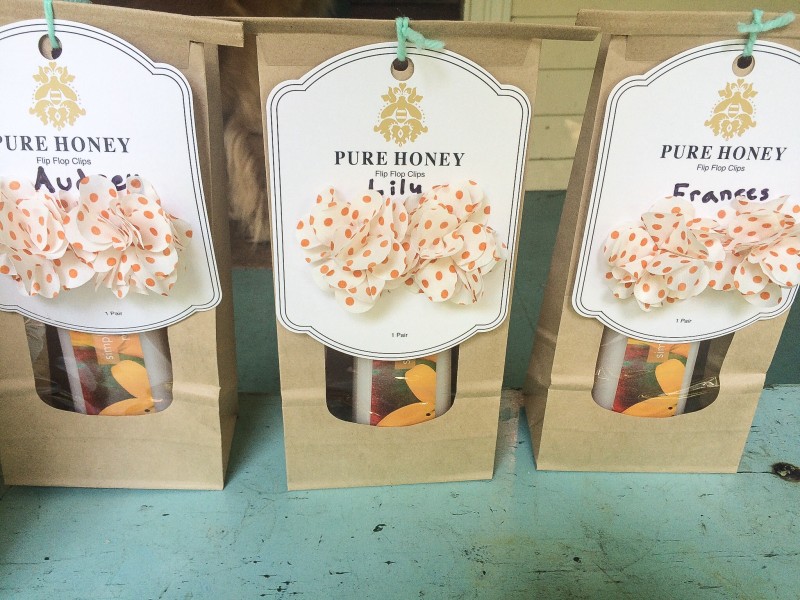 I will never forget the year that I followed Oliver’s lead on party favors; he was like five at the time and he thought SCRAP (you can read about it here) was the coolest thing on earth. Instead of throwing a party there like I should have, I had him pick out all kinds of craft supplies with the thought that the kids could make something out of it. Cool, right?

Only problem is that I’m not that creative when it comes to this kind of thing and I ended up running out of time. I ended up throwing all these odds and ends in their goody bags.

I am mortified to this day thinking about it.

Upon spying these bags, parents probably hated my guts.

“Sure, every kid likes M & M’s and Tootsie roll pops, Sarah, but what the #! am I supposed to do with all these bottle caps, rubber bands and paper thingies? Thanks a lot– for not only sharing your clutter but now giving me the homework of trying how to use this crapola because you promised my kid a craft project and didn’t deliver. Great. Can’t wait to return the favor.”

It still shames me to this day.

If you followed my advice, and got them that chock-full pinata, you’re 90% there. Fill cute bags with all that divvied up candy and already it looks like Halloween in, say, July.

Now you just need one more fun thing. DO NOT BUY stupid plastic things from Oriental Trading or Dollar Store. No one wants non-working mood rings, miniature neon spiders, or ineffective happy face erasers (to be safe, just stay away from anything that sports that stupid yellow grinning face as overexposure could lead to Stephen King-esque nightmares).

You’re not fooling anyone with junky favors — lots of  little things isn’t a good thing and no one wants this junk in their homes. Kids will look at you like you’re nuts and parents will look at you with contempt.

“Wow, a tiny yo-yo that works for one-tenth of a second before breaking. Thanks. Now I have garbage to deal with and a crest-fallen kid — you shouldn’t have! I mean, YOU REALLY SHOULDN’T HAVE.”

All you need is one anchor treat. 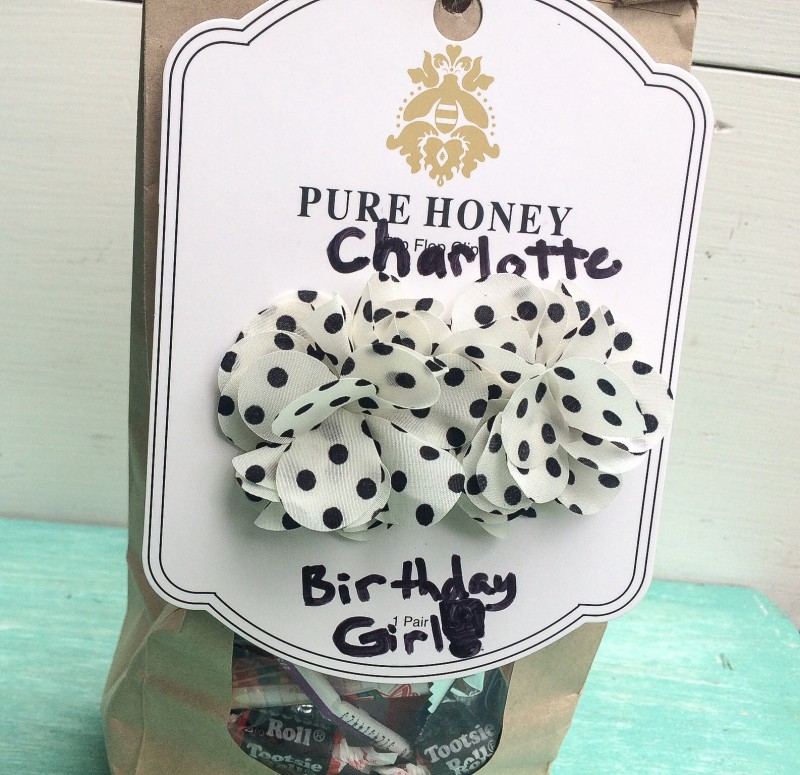 In Charlotte’s case, they had two.

On top were these adorable flip flop charms, and inside the bag with all the pinata loot was a bottle of mango body lotion. And if there is one thing girls like almost as much as candy and polka dots are body lotions. 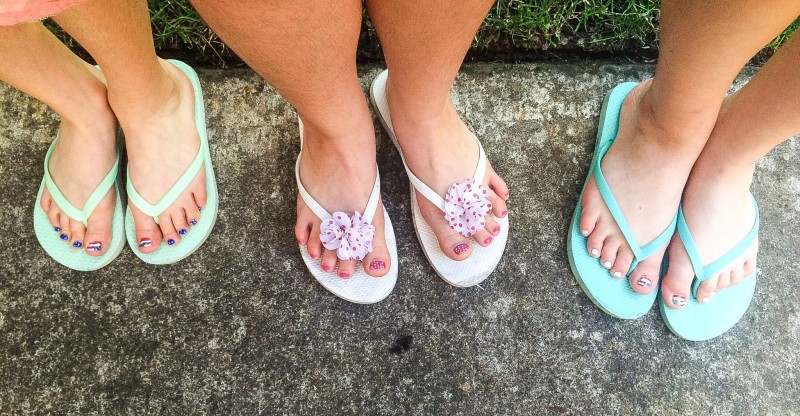 Throwing a boys party? No problem. One great truck. Or a really good yo-yo. Or do as I did for Oliver one year; I sent every kid home with a jar of homemade caramel sauce. Another year, a $5 gift certificate at a local ice cream store. That’s it.

And just to be clear.  When the guests have left and the cleanup is done, be sure that you have saved a little liquid party favor just for you. 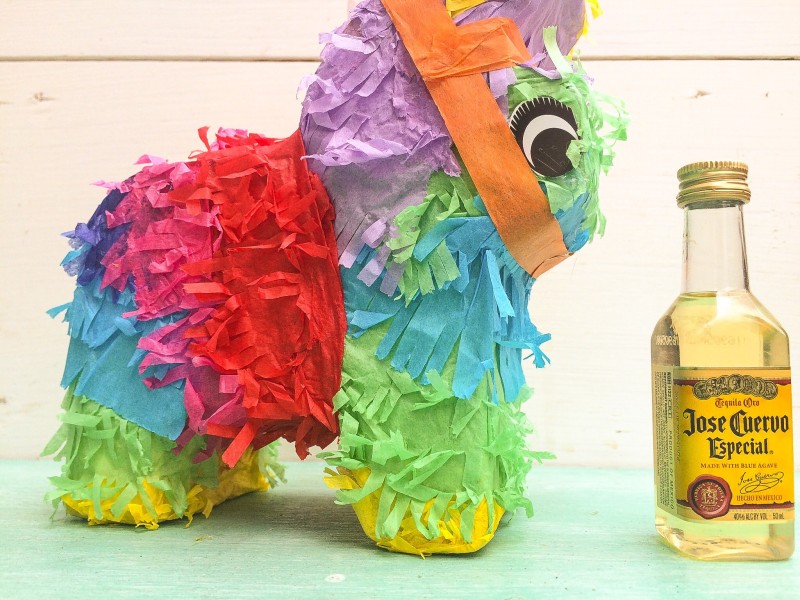 After hosting yet another birthday party, something tells me you’re going to need it.