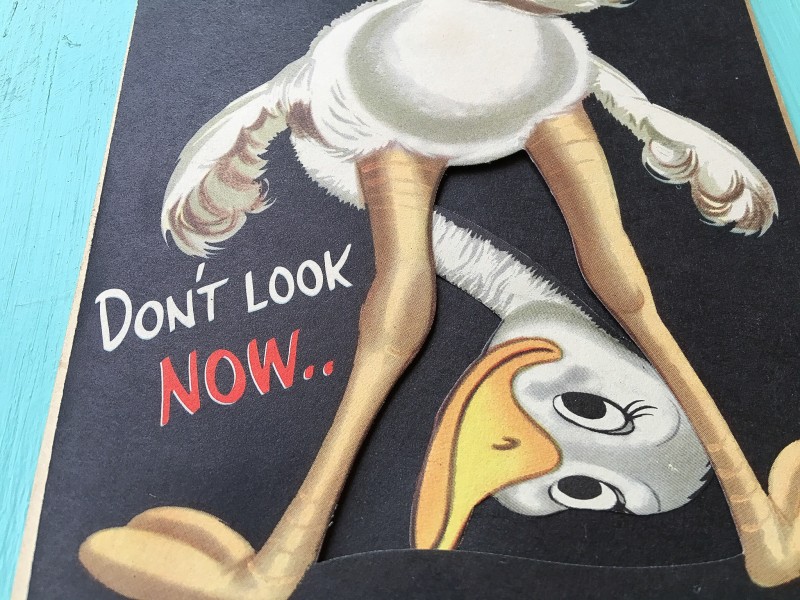 Little cheers me up like a successful sweep through a Goodwill store. Or two.

It’d been a rough week – our Seahawks lost, what little we had invested in the market took a calamitous nosedive, and then I had to have a colonoscopy.

Luckily, Goodwill usually lifts my spirits, and this week was no different.

Take a gander at some of the things I’ve found in the last two weeks.

First up, a purse for my sister.

No, it’s not her birthday — I just saw something I thought she’d like and she is hands-down the most incredible sister a gal would be lucky to have. Smart, talented, funny, generous and compassionate to the core, she’s the full package — and then squared to the nth power.

I hope you like the little canvas and leather Coach satchel I found for you. 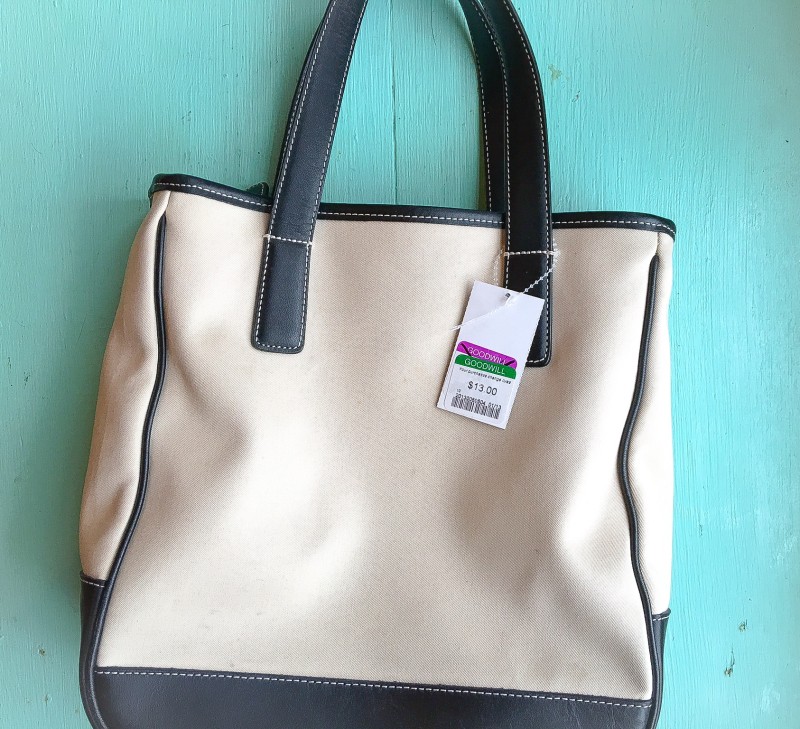 I found it at the Cedar Mills Goodwill stores  — and I have to say for day-in, day-out, I think this Goodwill retail store might be my favorite.

As you can see, it was under fifteen dollars and it was in near perfect condition — just the tiniest of scruff marks inside and just the right size for your wallet, sunglasses, a small cosmetic bag (or a good-sized snack).

Then it was off to the Bins.

I’ve been twice in the last two weeks — and I found lots of little treasures. 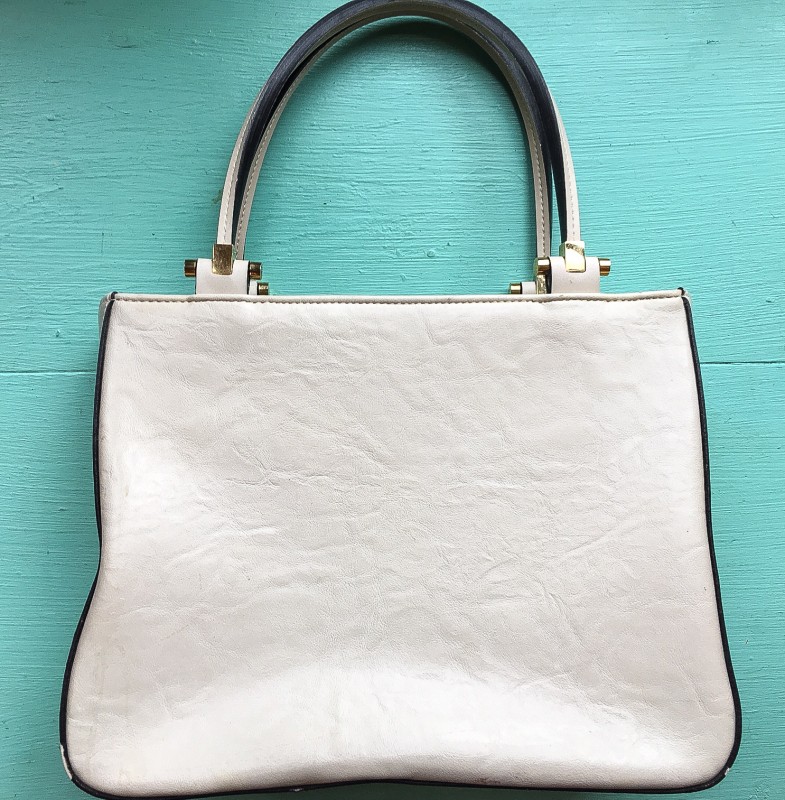 As you can see, there are a few places that the black leather piping is stripped, but I think I will try to touch it up with a Sharpie (or leave it alone as it’s only on one side).

I talked up a stranger who allowed us to combine our purchases to hit the magic 25 pound mark (at that point, everything is 99 cents a pound), so this purse ended up costing me 92 cents.

It’s very Kate Spade-ish, and because I wear a lot of black, it looks quite jaunty.

And then I can’t wait to show you what else I found, buried at the bottom of a bin of lots of mostly junk. 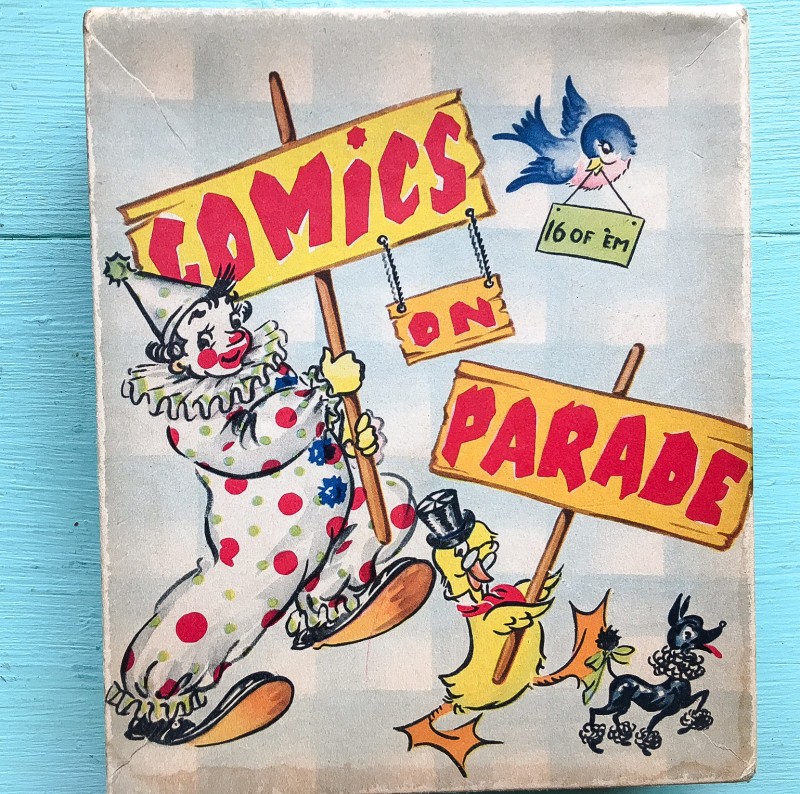 Here’s a tip for Bin newbies — if you are looking for vintage things, keep on eye out for anything of the era in a bin — and look through every inch. And I mean the entire bin because not everyone will.

In this particular bin, I found half of a matchbook, tattered and dirtied, but the writing on it looked vintage– plus a very old looking pencil.

Sure enough, at the way back of the bin, under an old banged up pot was this of box.

And just look what was inside the box.

Six cards, five envelopes, in perfect condition, not a mark on them.

They look to me circa 1950’s – which means that they are coming up on their seventy year anniversary.

I imagine they look almost exactly as they did when they were first purchased. 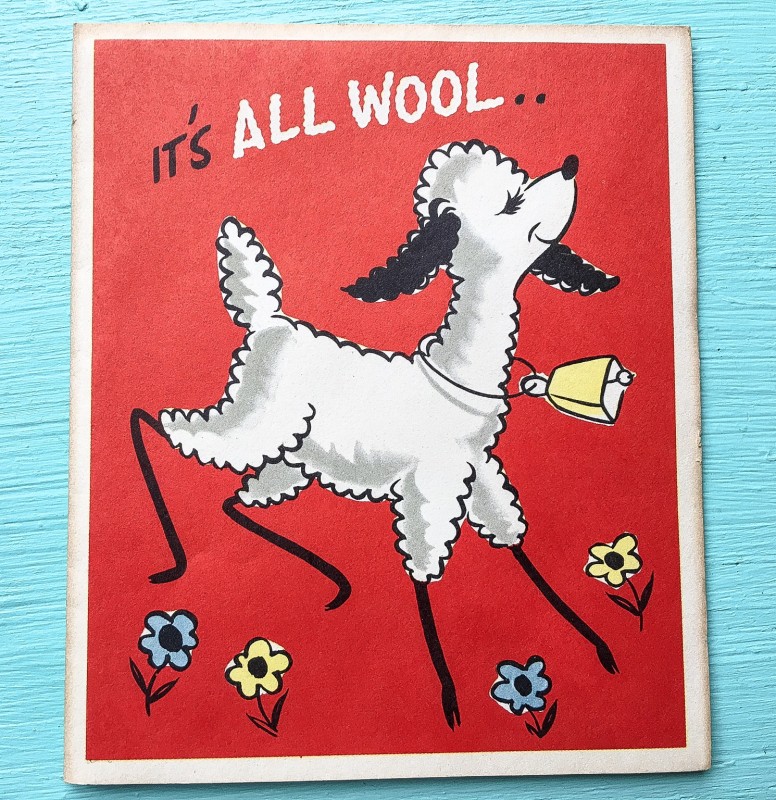 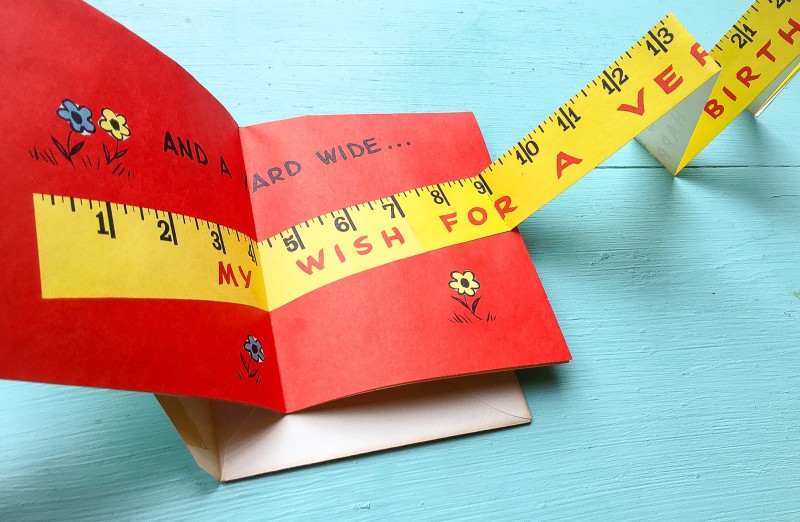 Where have you been hiding all these years?

The thing that’s really fascinating about all these cards is that each sports their own pop-up. 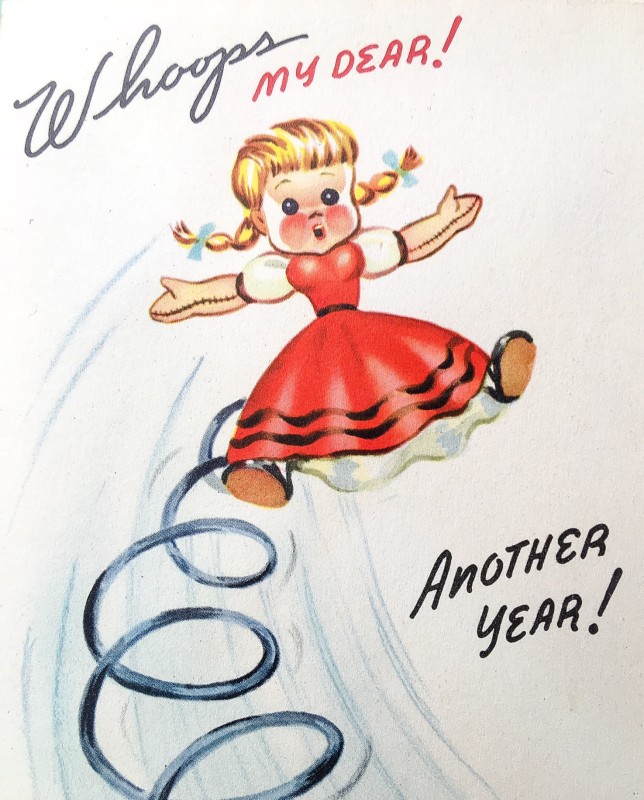 Which means that when  you open that card, out comes a little surprise. 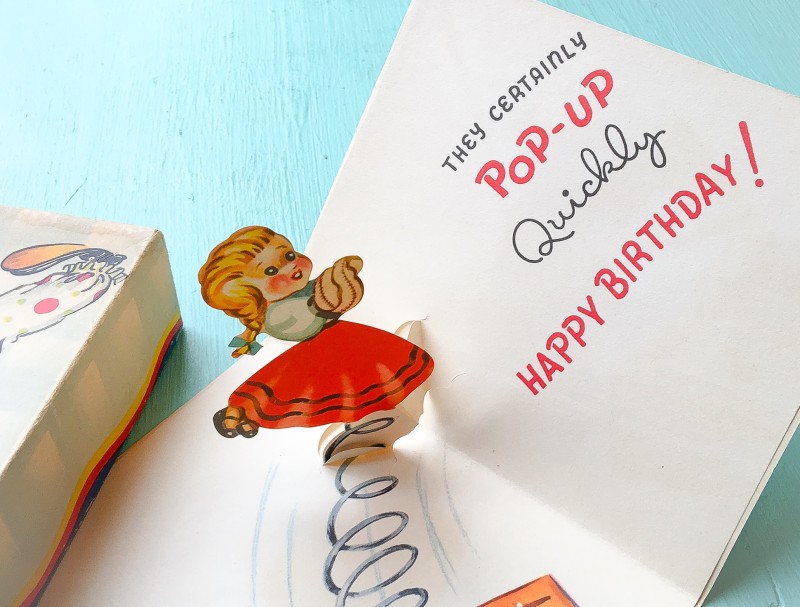 And just look at those amazing fonts. 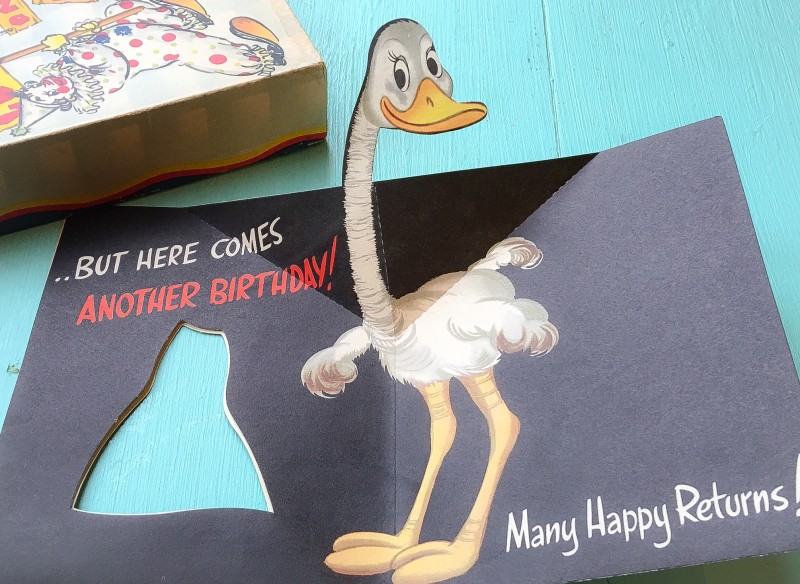 Unfortunately, I didn’t take the picture of the amazing The Godfather T-shirt I found; I was hoping it would fit Oliver but it was tight in the shoulders so I passed that one to someone else who will appreciate it.

But I did find one last thing.

And here’s why I love it so much.

Last December, I decided to give away one of my favorite little finds to someone I thought might enjoy it.

I’d made a big batch of Jumbo Curried Cashews  and I was looking for a few cute containers to give it in. 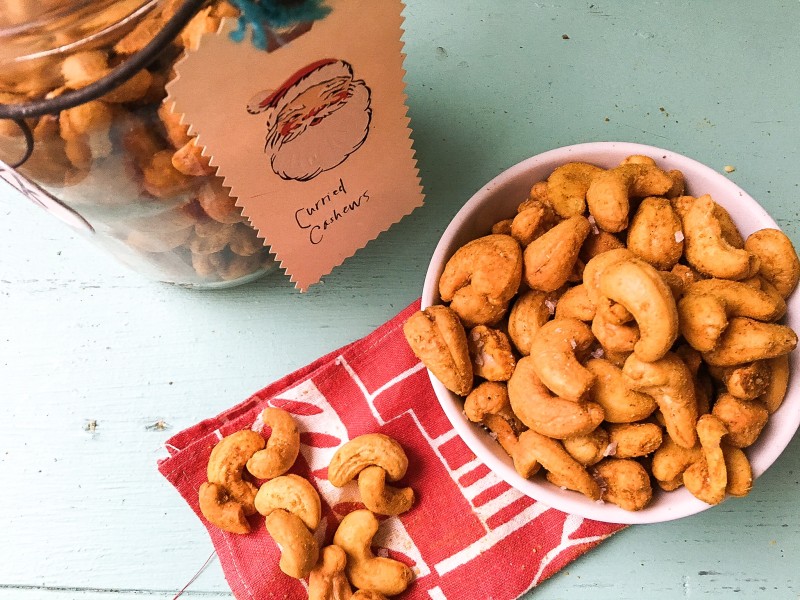 I had this little vintage looking Santa tin that I knew a certain someone would love but this one was hard to let go — it was so cute and please– the red gingham? 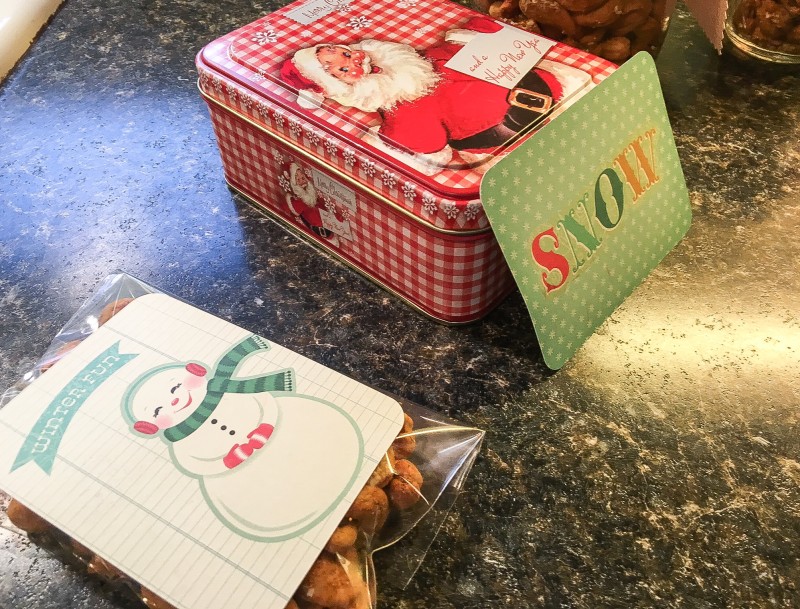 At the time, though, I remember thinking — Pass it on. I bet karma is going to throw another like it your way — if only you are willing to share this time.

And lo and behold, look what I found just a month later. 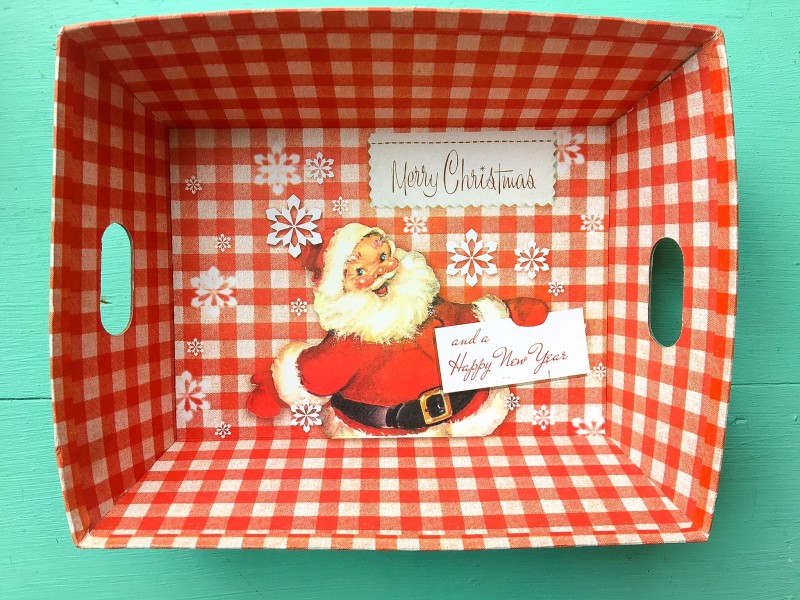 Two times it eluded me.

I’d just walked in the Goodwill Outlet (“The Bins”) last week when I saw some youngish guy walking around holding it, and heading to the register. I almost freaked out– I recognized the pattern and the face of the Santa, and I thought Damn! If only I had come 20 minutes later I would’ve had it!

I pouted for a few minutes and then I found the above white purse and instantly felt better.

One hour later, I was getting ready to check out when I noticed another person, this time a middle-aged woman, holding the same basket.

I thought, What the heck?

I tried not to stare. I decided I was going to mind-meld her.

I thought over and over, like a mantra. Put it down. You don’t want it. It should be mine. We belong together.

No sooner had I thought that three times and sure enough, she put it back — and I raced over and got it.

I love the life lesson — share what you love and it will come back to you. Maybe it will be the same, maybe it will be different, but more goodness awaits. The world is full of it.

So welcome to the fold, my little gingham friend. 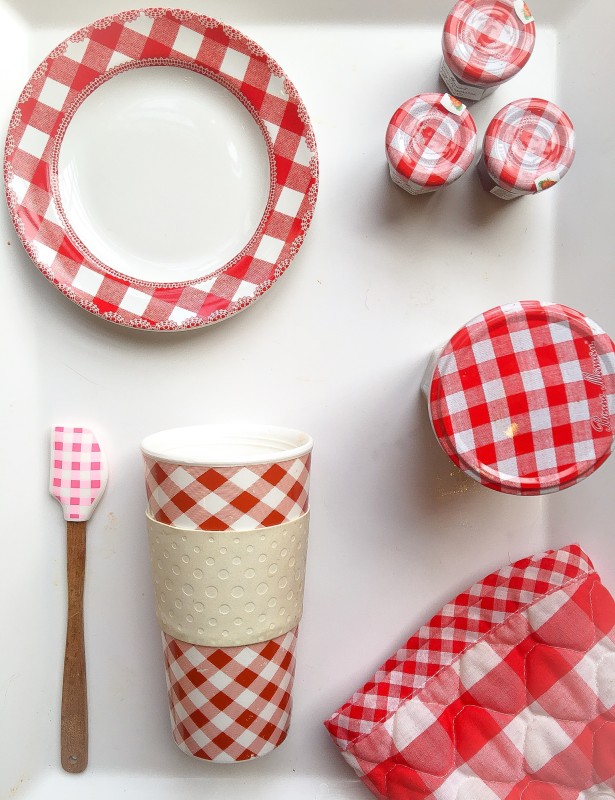 Something tells me you’re going to fit right in.

« CHEX SNACK MIX AND THE HEARTBREAK OF FOOTBALL
PUPPY AND POUNDCAKE »