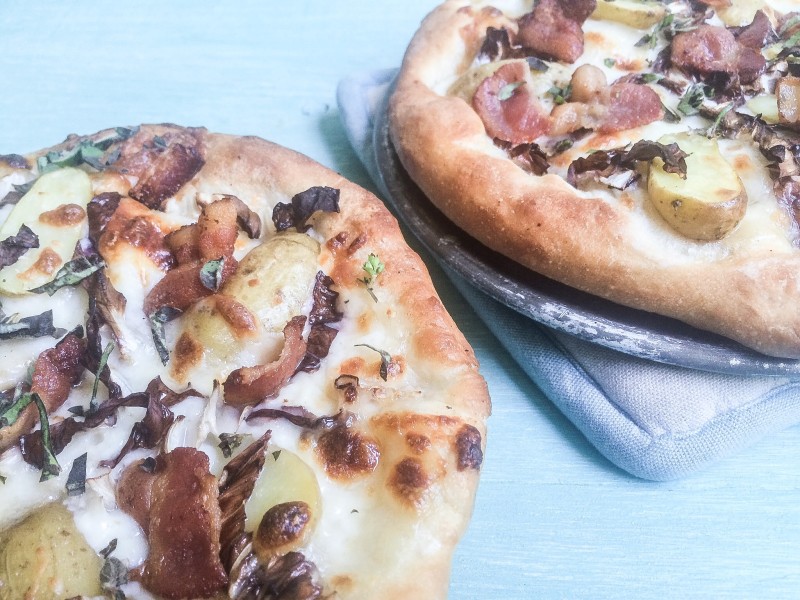 I’ve yet to find a stress-busting strategy that works better for me than getting in the kitchen and cooking away the worries.

You see, the last couple days I’ve been a bit of a jittery mess as I prepared my son for a trip to the Dominican Republic.

This is a trip he is taking with his eighth grade Spanish class and one which has been the subject of two years of planning, saving, and much discussion.  It’s been arranged by EF tours, an amazing company that arranges for top-notch educational tours for people of all ages (and coincidentally enough, my brilliant brother-in-law joined the Swiss company just recently).

When we signed up two years ago for this excursion, it seemed so far away that I didn’t worry about it. It really wasn’t until these last few weeks when we started to amass supplies like crazed squirrels that the reality of letting go started to sink in.

I’m a worrier by nature, and this trip seemed fraught with activities that made me nervous: taking small commuter planes, white water rafting, snorkeling in open ocean, traveling mountain roads on buses of dubious origin. When I thought about sheltered he is and how many things he’d be doing without one of us nearby, I felt myself starting to unravel.

What if he loses his passport? Or is talking with his friends while crossing the street and doesn’t see an oncoming car? Or that scratch on his arm turns nasty? Or the food or water doesn’t sit well?

So many worry buttons, but I couldn’t let my anxieties become his. Time to let go a little.

Suddenly, with just one last night together, there was so little time left. But he was ready. I was ready (mostly).

I asked Oliver what he wanted me to make for him. Anything.

“Could you make homemade pizza?” 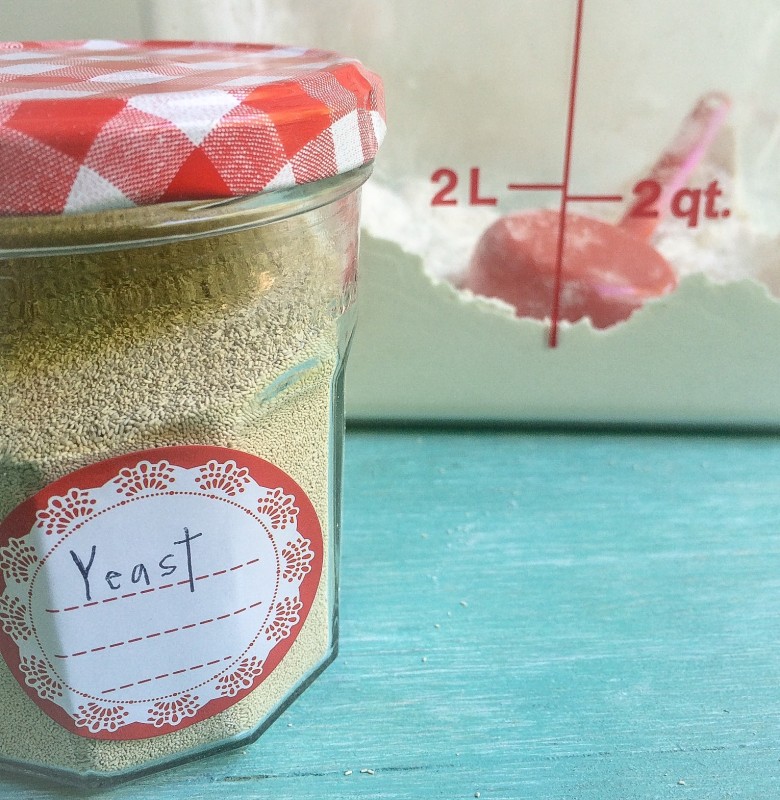 I love making homemade pizza, and it’s surprisingly easy to do — you just need a great big bowl, fresh dry yeast, flour and salt, and a tinch of patience. 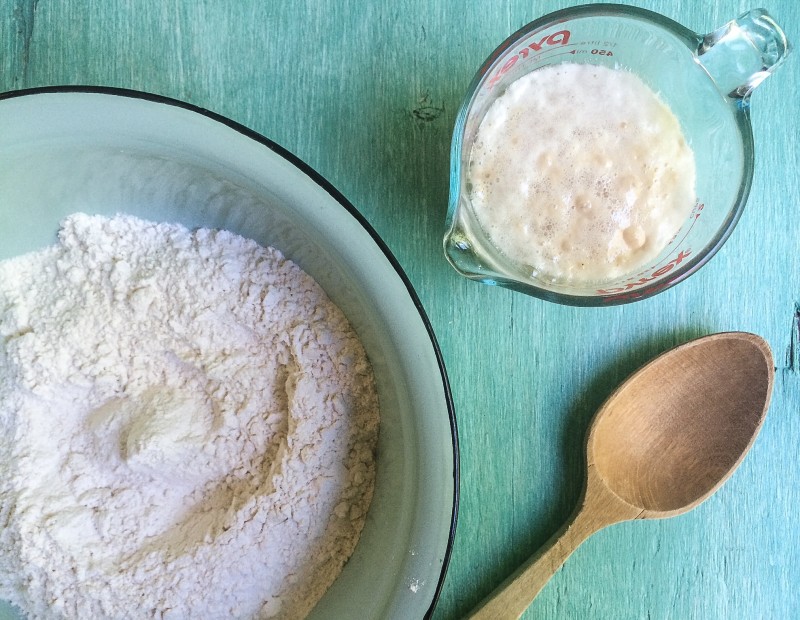 The dough took minutes to pull together; I’ve been making it for twenty-five years so I don’t need a recipe, but newcomers will have luck trolling Epicurious for a great recipe (search by fork rating).

I relished the vigorous kneading. It felt cathartic to pull, punch and shape something amorphous and sticky into a soft, pliant ball (Whack! Take that transportation worries. And smoosh! Eat this, drowning concerns). 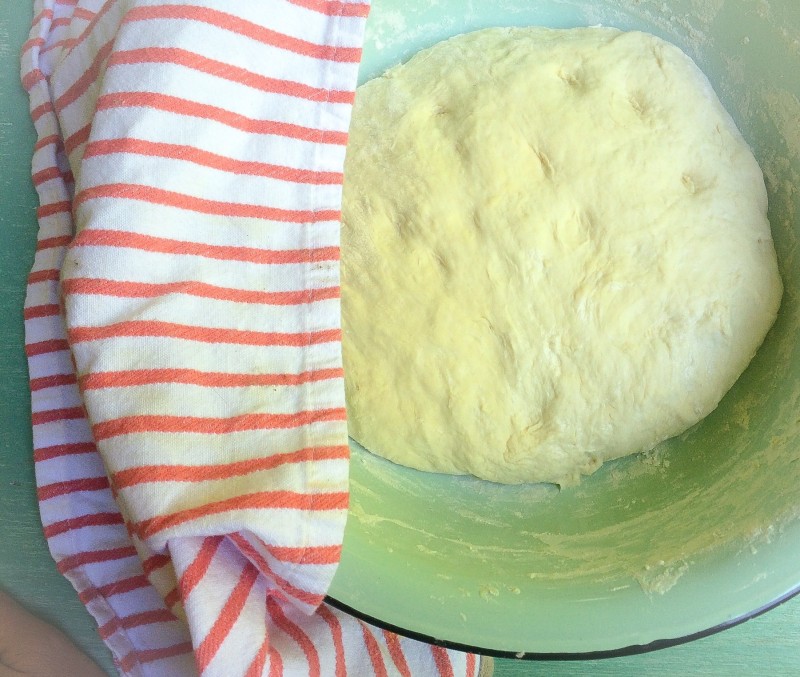 Each kid received a custom pizza; for Oliver there was sausage and pesto, and Charlotte had pepperoni (I didn’t take pizza pics because I was so overwhelmed by the poignancy of the moment).

I tried not to cry too much when we watched a movie together and he snuggled up next to me. He may be 14, but he’s almost 5’10” and so it was sweet when he put his arm around me and told me not to worry too much.

Have you ever ready the children’s picture book I’ll Love You Forever? It felt like that.

Next morning, there were lots of teary goodbyes.

There was a hug with his Dad. And then with me, and I think he told me a joke just before the picture was taken so I wouldn’t start bawling. 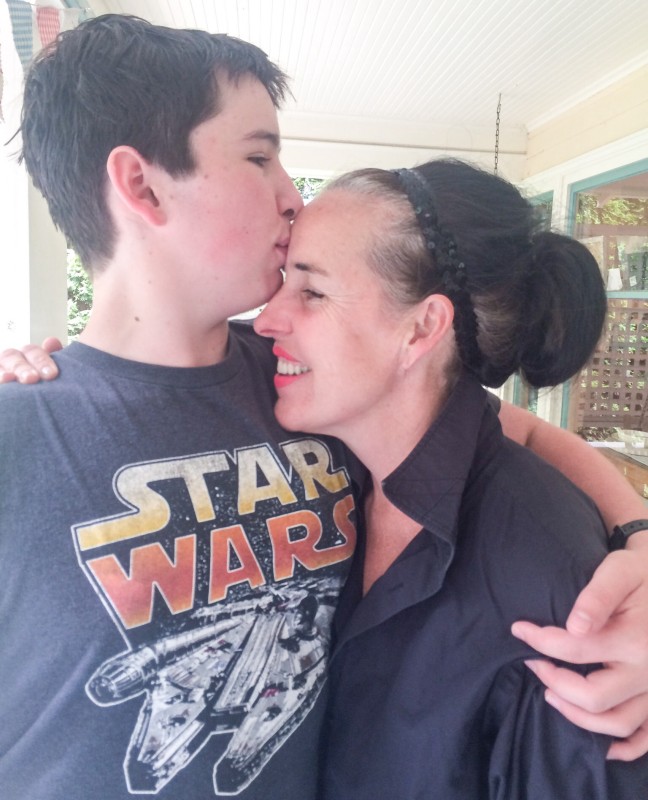 He gave his sister a big brotherly hug and I watched tearily as she sank into him.

She too told him to stay safe. And then kissed his chest one last time. 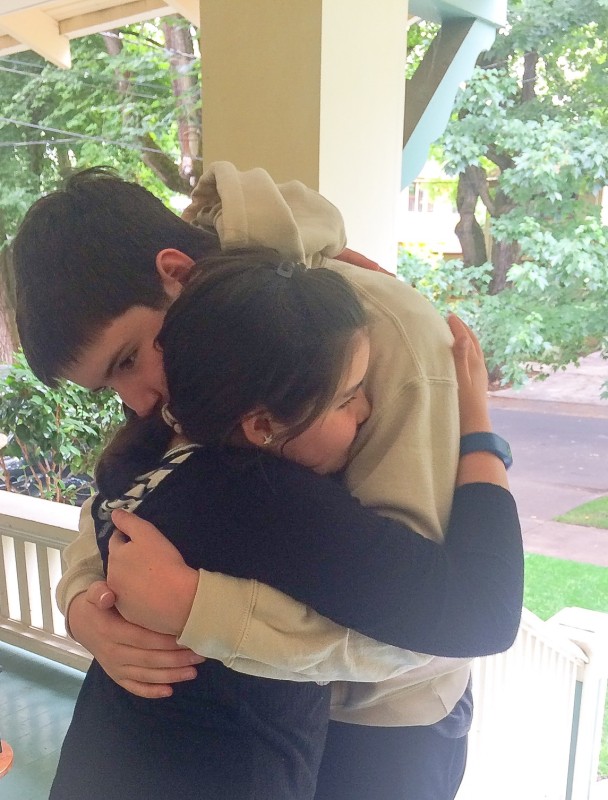 Like most siblings I guess, they squabble and argue over stupid things and this drives me bananas.

But at the end of the day I know they both love each other and will look out for each other as they grow up. And hopefully even more so when the two of us are gone.

What was most poignant, however, was watching my son with our dog, Bailey.

Bailey and he are thick as thieves, and have been best of friends for nine years. Our golden has been so depressed since he saw the suitcase come out earlier in the week and it became clear that one of his people was leaving.

So Oliver did what we Klines do best– he gathered something tasty and shared it.

In this case, it was his breakfast sandwich of egg, aged Tillamook cheddar and bacon on a brioche bun.

Like a waiter, Oliver explained all the ingredients and Charlotte continued to caress his soft fur. 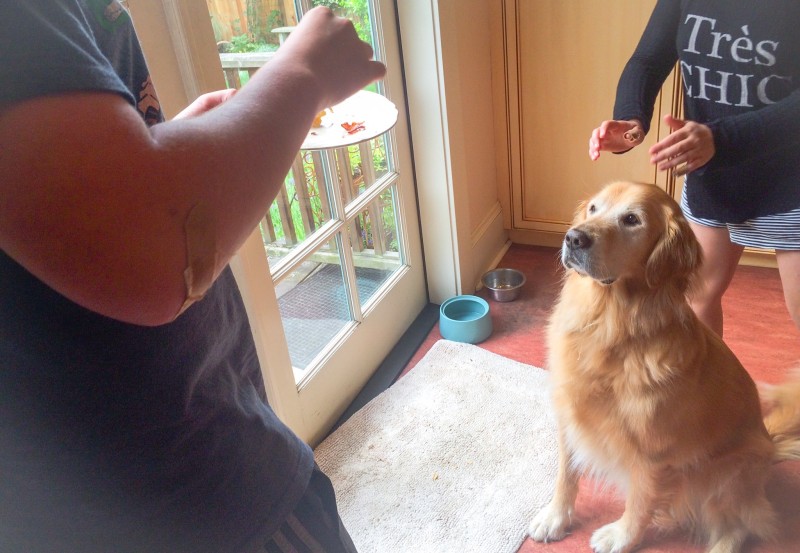 What you can’t see is the pool of saliva that amassed during the presentation.

After the nibble, Oliver took Bailey in his arms and told him how much he loved him. 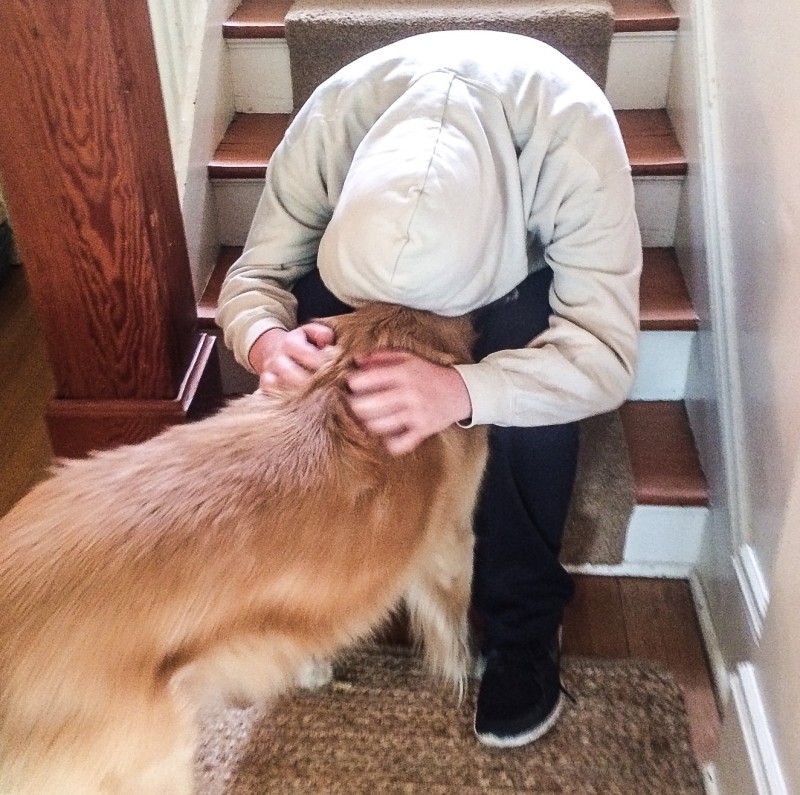 I listened just around the corner and almost started to weep when I heard him reassure his buddy that he’d miss him too but he’d be back.

And then he was off.

And I was left with enough pizza dough for a Roman army.

I decided to invite my pal Gillian over for lunch yesterday; she always has my back and she had thoughtfully dropped off flowers the day before because she knew how hard it would be for me to see him off.

I knew just how to repay the kindness. 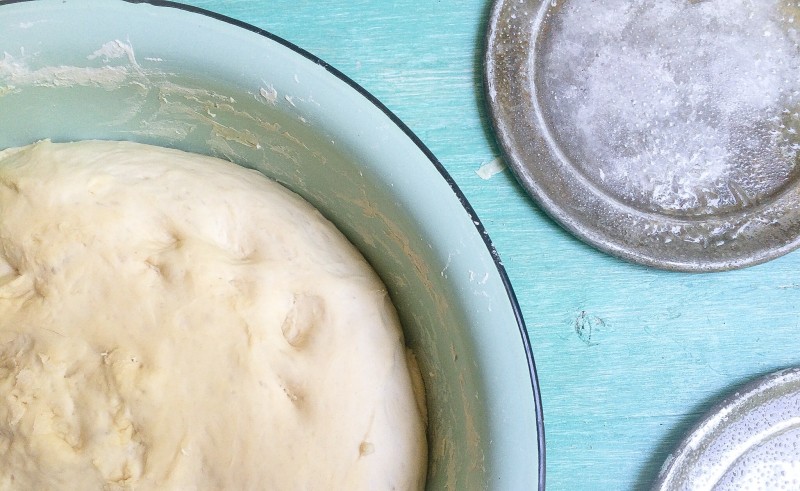 When I used to cook at Greens I would sometimes work the pizza station and I loved making the dough and the individual, cooked-to-order pies. Twenty five years later I’m still using the same kind of aluminum pans we used at the restaurant –they’re light and allow the crust to crisp up beautifully. I have about ten in various sizes, and use them often.

I gathered ingredients for our pizzas. 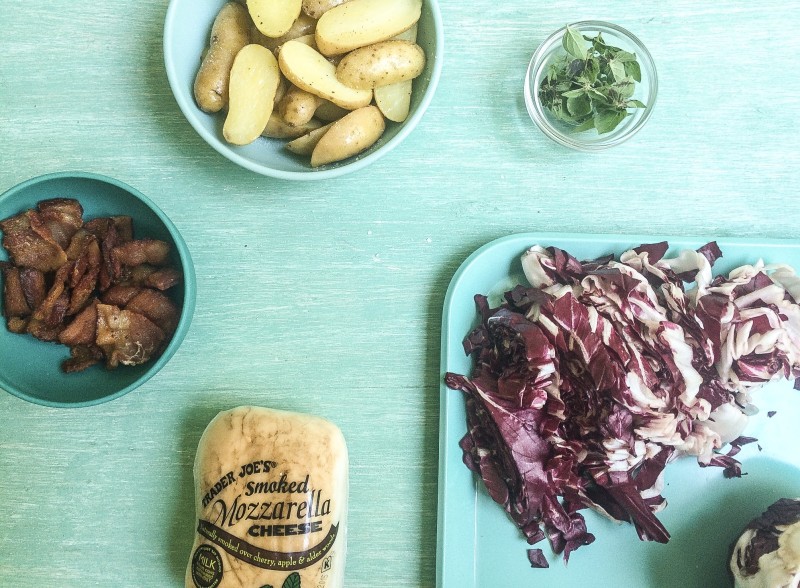 Gillian and I both share a love of bitter greens like radicchio so I started there. Bacon seemed like a natural addition and I thought potatoes would add heft and substance (I steamed them until just tender). Oregano would add brightness, and smoked mozzarella would send it in another direction. A great one.

Am I the only one who is crazy excited that Trader Joe’s now carries this cheese — and under three dollars? Good times. 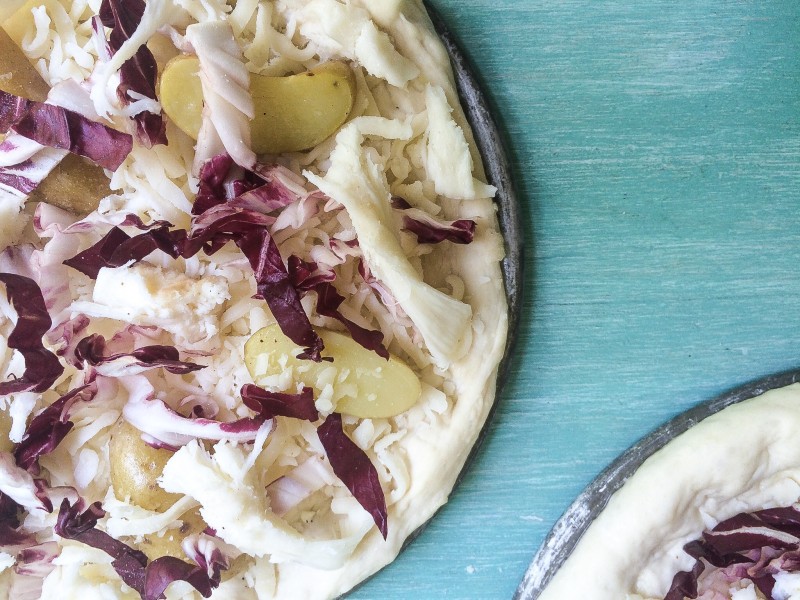 Once the oven hit 525 degrees, in the pizzas went.

At that heat, they only took about eight minutes to crisp up to a beautiful golden brown. I added the cooked bacon at the very last minute as I didn’t want it to brown any further. 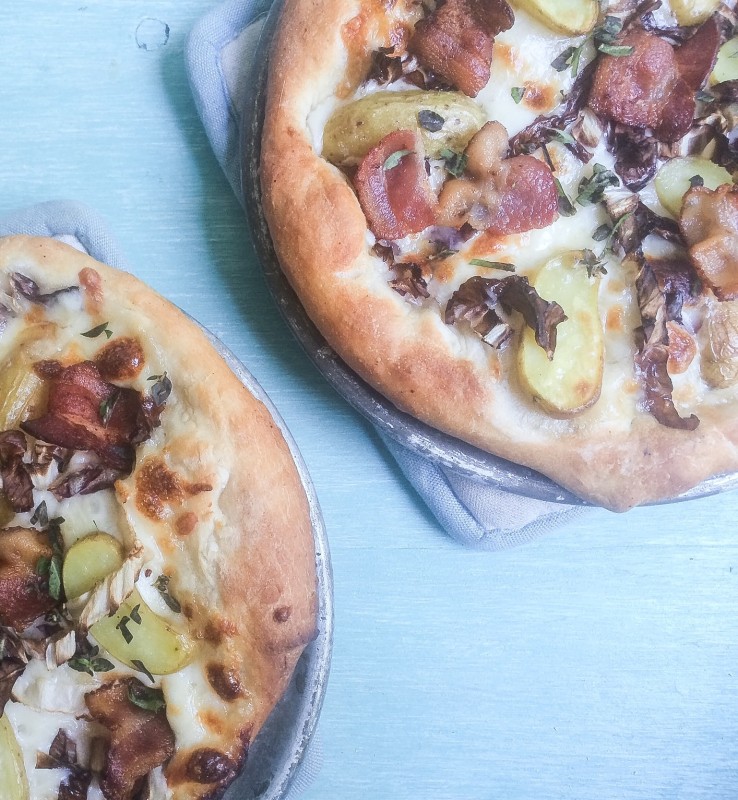 The pizzas were so tasty– the crunch of bacon, the herby hit of oregano, the slight bitter tang of a radicchio chiffonade and then the occasional sinking into a fingerling potato. Smoked mozzarella gave the whole pie a much more interesting, rounded flavor. 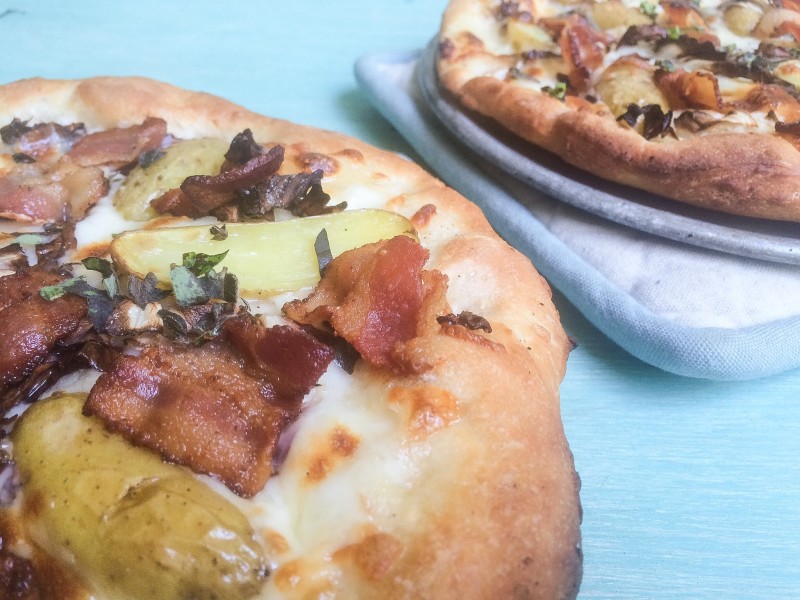 And here’s a little secret — I brushed the bacon drippings on the crust, ensuring an even more bacon-y flavor. Wasn’t that naughty (but nice)?

So Oliver, I know the last thing in the world you are doing is reading this, but I hope you intuit how much you are missed (yes, I’m the geek that took a picture of him holding my hand because it was such a rarity). 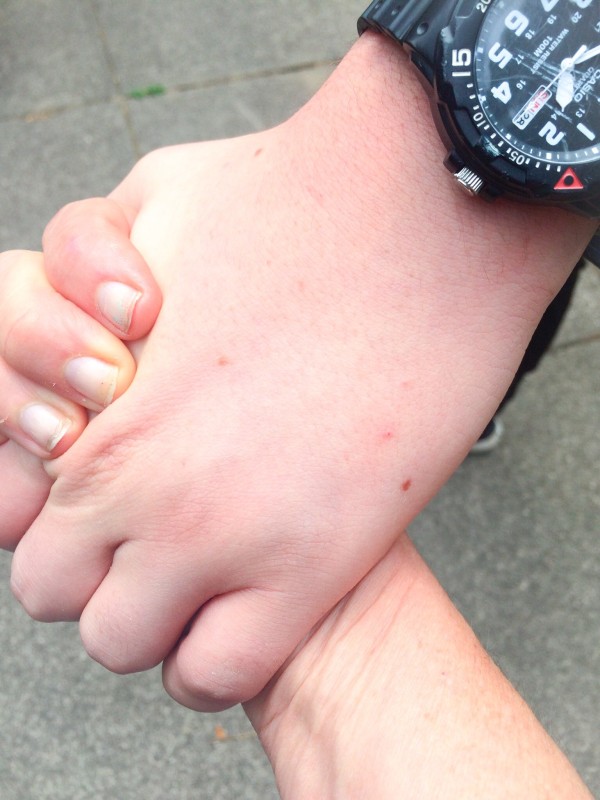 And just how many delicious meals await you back at home.

« PORQUE NO?
NUVREI PATISSERIE AND CAFE »