You are here: Home / Cookies / HOW TO MAKE PERFECT MERINGUES — MY FIVE TIPS 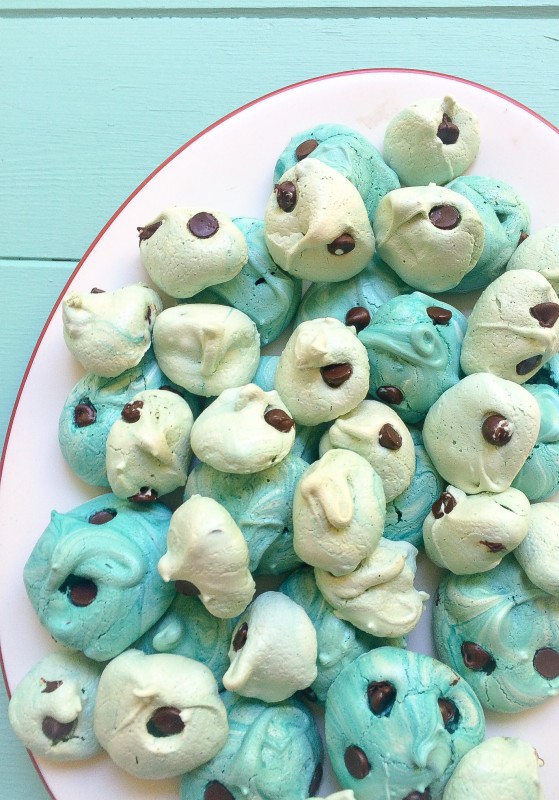 My husband David has a problem.

When Trader Joe’s stopped carrying his favorite kind of meringues a few weeks ago, it floored him.

He had come to count on their airy goodness as a snack when he reads at night; the relatively low-calorie treat was enough to satisfy his sweet tooth and had become his late night go-to. No other brands– even the fancier ones from Whole Foods and New Season– satisfied him.

He even sank so low as to order a box of them from Amazon Prime, but when I saw the little box that cost about three dollars at Trader Joe’s was almost twelve dollars delivered, I freaked out. 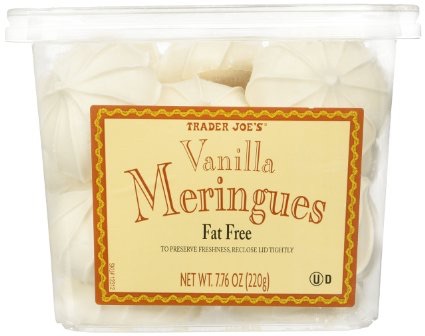 “Sorry! I thought it was for two boxes. I’ll try to get this meringue thing under control”, he promised.

The irony of the husband of a food blogger ordering cookies on-line for personal consumption wasn’t lost on me.

A solution suddenly dawned on me — one that meant that he no longer would have to go elsewhere to satisfy his cookie needs.

I knew just where to start.

About four times a year my dear friend Elona drops off a plate of homemade meringues and David and Charlotte always fight for them — they’re a little chewy, a little crisp, and completely adorable with the chocolate chips both inside and poking out of the shell.

By golly, I was going to make these cookies and solve this meringue issue once and for all.

I called her for the recipe, and she texted it to me within minutes; she didn’t know its origin but she’d been using it forever.

Funny thing was, I was a little anxious about making them.

I hadn’t made a meringue since cooking school twenty something years ago, and I was a bit daunted. It’s weird that I would be psyched out by a simple cookie (I’ve made souffles for a cooking show, for heaven’s sake) but if you’ve ever been out of practice for a while, you know it’s easy to lose a bit of your kitchen confidence.

So I read up on the subject. As in lots of reading.

Perfectionists like me tend to do that; so nervous about making a mistake they do all they can do avoid any future misses. They overthink before they jump in.

And here’s what I learned, from both reading and personal experience this week. 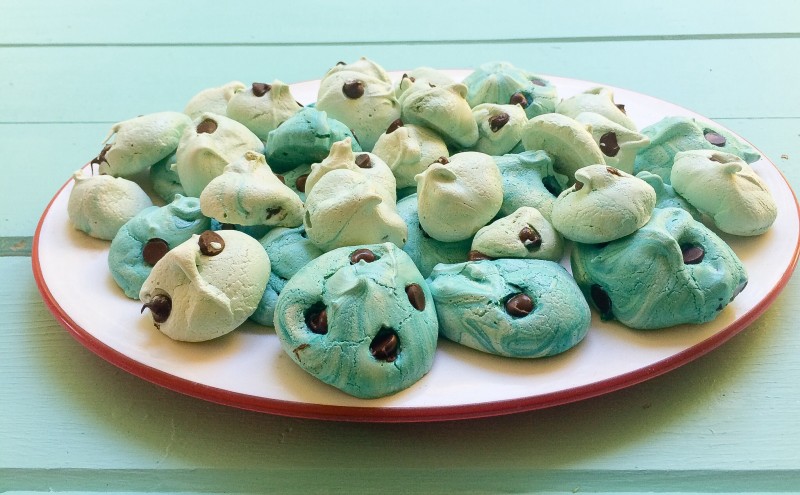 1. This recipe benefits from extra fine sugar, but don’t be a sucker and buy this spendy version at the store. Just make it. 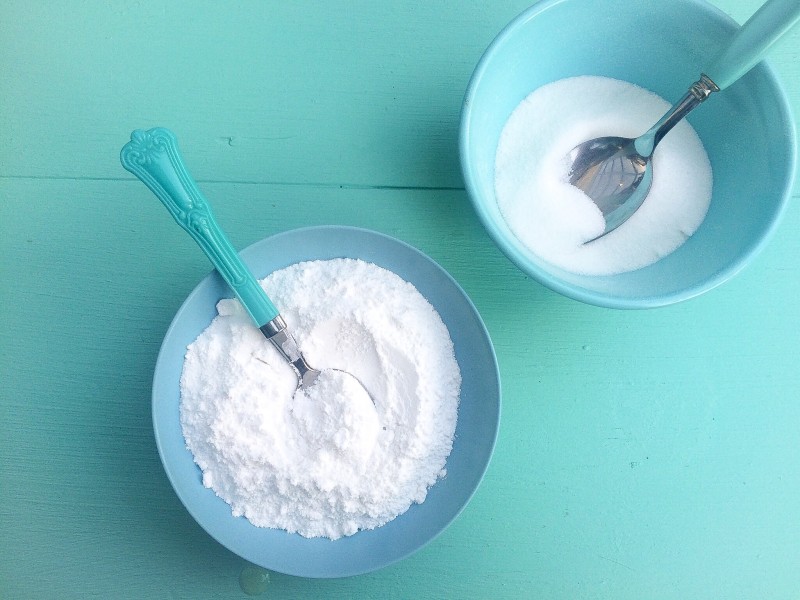 I used to buy extra fine sugar (otherwise known as baker’s sugar) for certain recipes until I read the tip about whirling regular granulated sugar in food processor or blender.

It’s true — in less than a minute in either machine and your sugar is suddenly superfine (or even almost powdery if you let it go a little too long in a Vitamix like I did, see above).

Now that I’ve shown you how easy it is to turn any sugar into super-fine, do it for this recipe. Meringues are basically just egg whites and sugar and the finer the sugar, the more pleasing the end result.

2. Separate your whites from the yolks straight from the fridge, and then let the egg whites sit out on the counter for an hour or so before you whip them.

I was skeptical on this first tip so as an experiment, I tried separating one egg cold from the fridge and the others after they’d be sitting out for a while.

Sure enough, the cold egg was easier to separate as the yolk and white were more distinct (almost like siblings eager to take a break from one another) while it was more difficult with the room temperature egg. In that case, I had to be a lot more careful to keep them completely separate.

Also, every baker will tell you that room temperature whites are vital for getting that lift. I can’t tell you why (perhaps the temperature affects the ultimate volume) but I followed this advice, got the results I wanted– hence only room temp eggs from now on.

3. Use multiple small bowls when separating eggs — and a future disaster will be averted. 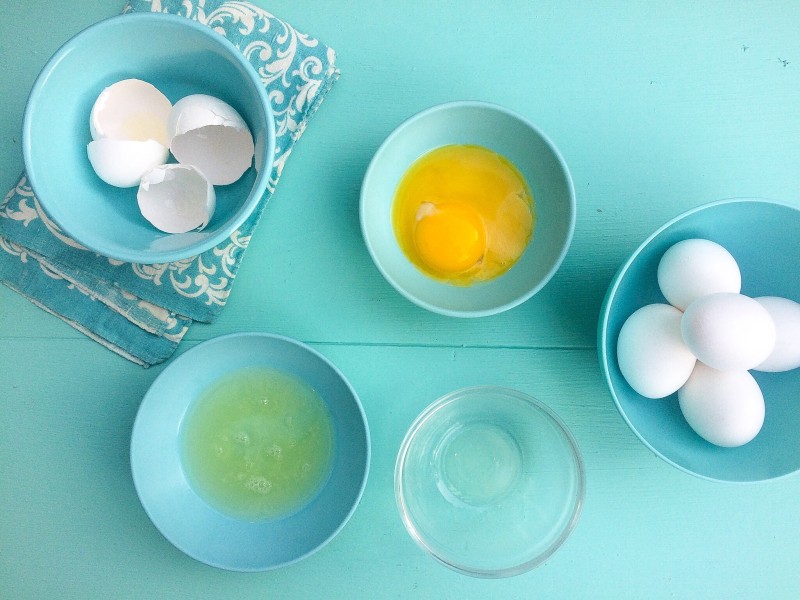 Have you ever been separating eggs and the very last egg cracks funky and you’ve messed up your whole bowl by tainting it with the addition of the wrong part of the egg?

Or even found yourself cracking whole eggs in a big bowl and then you notice that the last one to go in looks funny and you’re worried it’s a bad one — and then you have to throw out all those eggs?

I have and it’s annoying as hell.

Crack one egg and put the yolk in one small bowl, the whites in another. In a larger bowl put all successfully extracted whites, and you’re good to go. (Same goes for any recipe using cracked whole eggs; just crack each whole egg in a smaller bowl before you add it to the greater whole in another bowl).

Trust me, if you’re aren’t doing this and start doing it now every time with egg cracking, you’re going to be grateful you switched over.

(Isn’t life hard enough without having to throw out an otherwise good batch of eggs? Grrr.)

4. When using eggs — older are better than newer.

Perhaps you too have come across this tip. Allegedly older egg whites have the ability to hold more air than fresher ones, and in meringues that ability is key.

Hence, save the newer eggs in the fridge for that breakfast sandwich you’ve been craving, but use the older ones for the purposes here.

5. Be sure that your egg whites are firmly whipped and dry before adding the sugar, and then add that sugar into bowl in just small amounts. 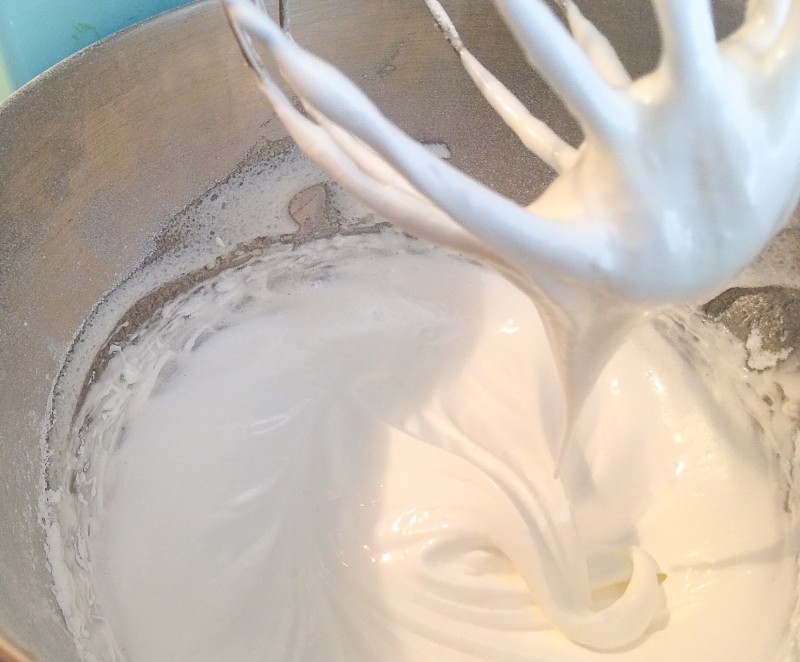 You want the stability of a firm peak before you introduce the sugar, and you don’t want to break your fragile whipped creation by overwhelming it with more solids than it can hold at one time.

Give it time, grasshopper — just a few tablespoons at a time, then add more. The whole process won’t take long — and far less time than if you get antsy, go too fast, and have to start over.

Okay, you’ve got this.

Don’t be intimidated — with a stand mixer or electric beaters, they’re a breeze.

And they are gluten-free which is great for a lot of people.

I played around with different shades of blue because I wanted to see how they’d turn out. I made two different color versions, one light and one darker.

Here’s what the latter version looked liked right before it went in the oven. 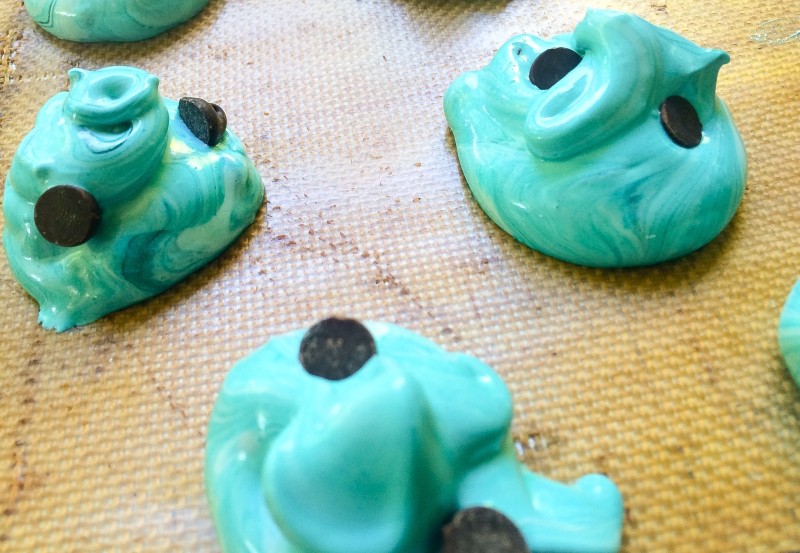 Here’s what they looked like right out of the oven.

The gentle heat tamed the bright dyes into two lovely hues: one a soft Sea Foam, the other a vivid Tiffany blue. 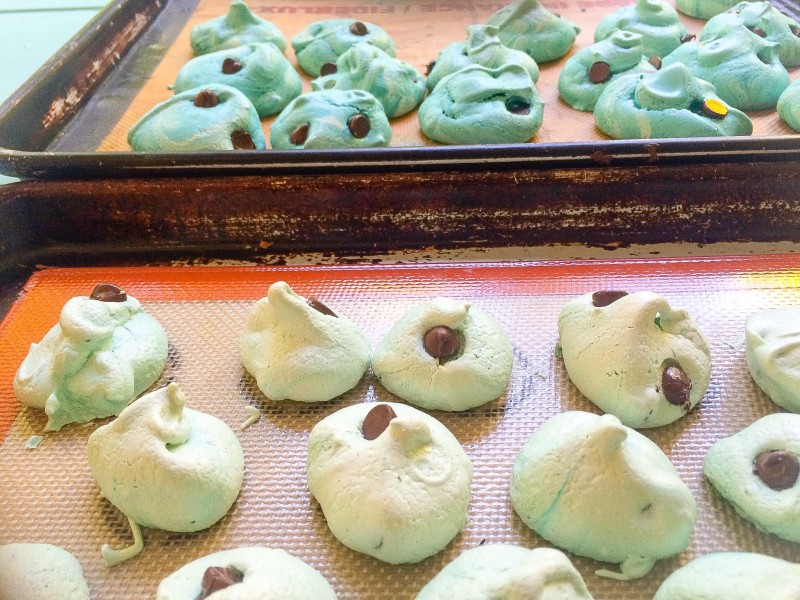 you get a swirl of darker color (see above and below)?

Next time I’ll play around more with that. 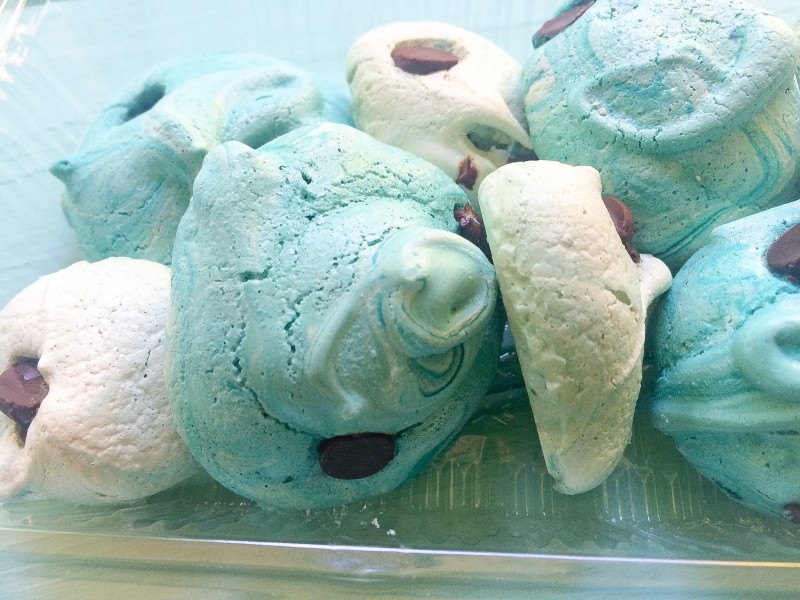 Maybe I’ll even go for an orange one for Halloween treats, perhaps with orange extract in lieu of the traditional vanilla.

Yesterday, I ate five of these as soon as they dried and even though I’m not usually a meringue nut, I loved these. Pillowy, crunchy, chewy — with the occasional chocolate chip poking through the edible clouds.

He too thought that they were delicious, so then blushing with my unexpected meringue success, I childishly pressed him — if you could only eat TJ’s or mine, which ones would you choose?

He picked theirs — he likes how they are super crunchy and no fat (so were mine but for the occasional chip).

I prefer homemade because I don’t like the chalkiness of store-bought and I like the slightest of surrender and chew of homemade. Charlotte and Oliver also adored them — and this morning they demanded the last of our bunch for today’s lunch.

I saved just enough for my family, and within an hour of baking yesterday I’d packed up the rest for nearby friends. 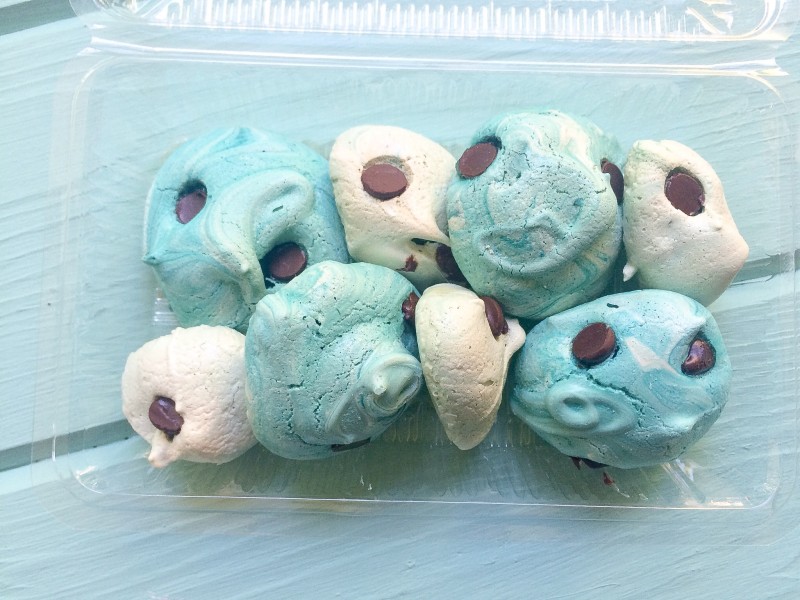 And a few lucky neighbors. 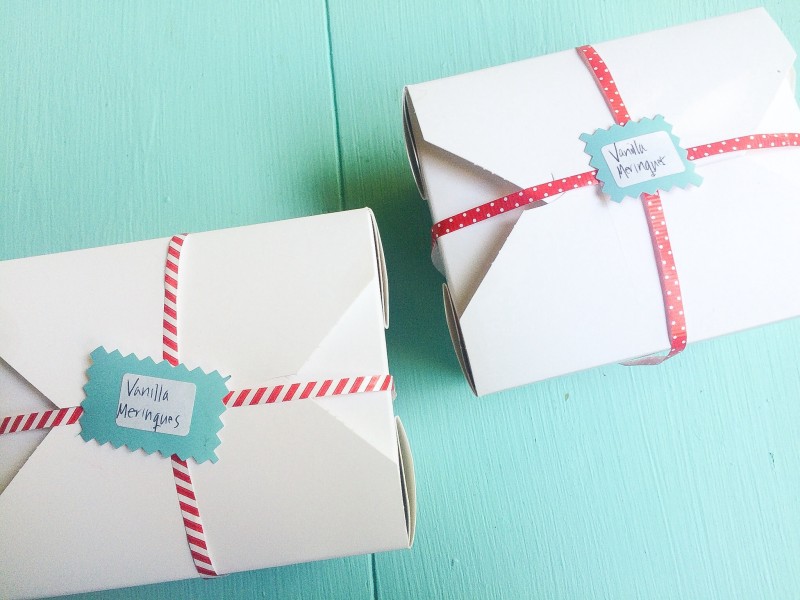 All you need are egg whites, sugar, vanilla and salt– plus the optional chocolate chips.

What are you waiting for? 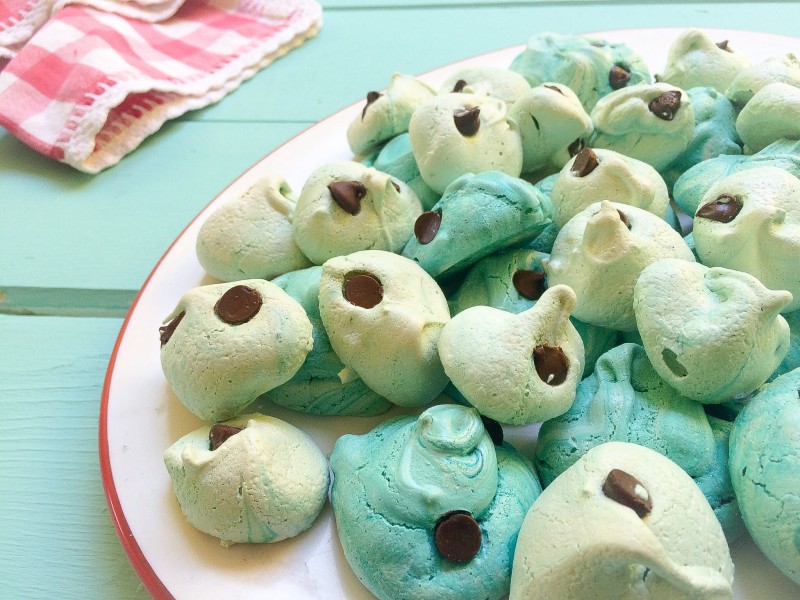 Homemade meringues can be yours to enjoy, too.

This week’s adventure has me thinking, and I’m now curious as to what dishes intimidate other home cooks.

Is there a dish you’ve been wanting to try — but are too daunted by possible failure to give it a go?