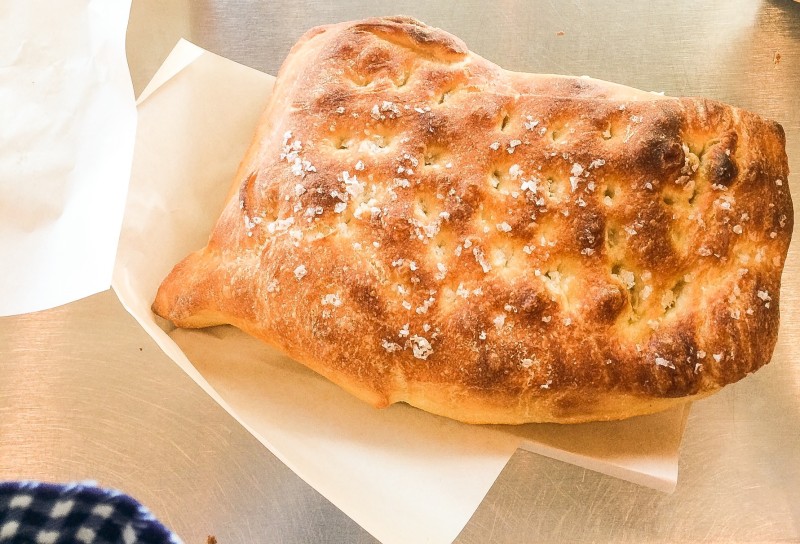 It seems now that every neighborhood in Portland has its own signature bakery, and each one is so noteworthy that it alone merits a drive across town.

Little T American Baker is such a bakery.

The place opened in 2008 with owner/master baker Tim Healea at the helm. “Little T” was his nickname while at Pearl Bakery, first starting there as an intern and then doing a long stint as head baker, earning awards and kudos for that bakery along the way.

Little T American Baker is clearly the embodiment of his perfectionism, talent and vision (“flour, science, hands & heart” is clearly displayed on the wall and is a reflection of all they do) and the folks in the ever-exploding Division neighborhood are so fortunate to have this in the hood.

Yesterday morning I remembered driving by Little T on a recent return from Bollywood Theater, and felt the need to check it out. I grabbed my crabby kids and dog, and headed over to Little T, right on the corner of 26th and Division in an airy, light-infused space. 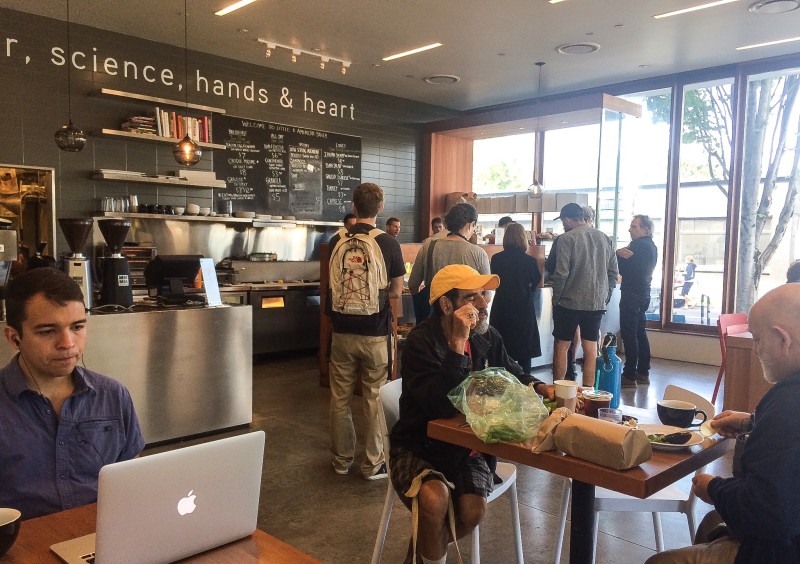 LTAB has a sleek, modern look to it; it’s not a cozy kind of place but has a rather bustling, communal vibe — families with strollers sharing long wooden tables with single people of all ages, the door opening up every few minutes with a steady stream of patrons, most of them seemingly on foot.

This place clearly has become an anchor of sorts in the neighborhood. People walk up to the counter already familiar with the offerings and the staff seems to know everyone by name. I overheard one employee goodnaturedly chide one headphone-wearing customer who failed to hear his name being called repeatedly — they laughed together like it’s a running joke. LTAB is chummy like that.

Enough chat of the feel of the place. I know you want to know about the food.

Charlotte the chocoholic opted for the Double Chocolate Croissant. No surprise there. 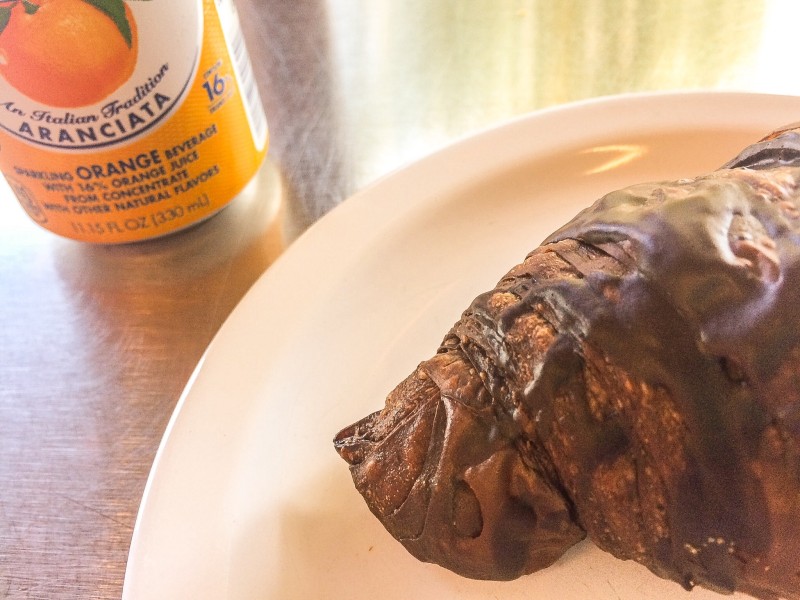 What was surprising was the croissant itself.

Having eaten my weight (and then some) of croissants over the years, I had yet to try one that clearly used cocoa powder in the dough. It reminded me of a roll I had once from Pearl Bakery (not surprising now knowing Tim’s back story), but this one had the layers of flakiness that are the hallmark of an exemplary yeast-leavened dough.

It had a shatteringly crunchy outer layer sweetened with a thick drizzle of a ganache-like glaze, but somehow it didn’t read as very sweet when eating it.

When cocoa delivers the majority of chocolate flavor, sweetness takes a backseat, and so this croissant felt restrained, temperate, and delicate.

And luscious down to the very last tender crumb. 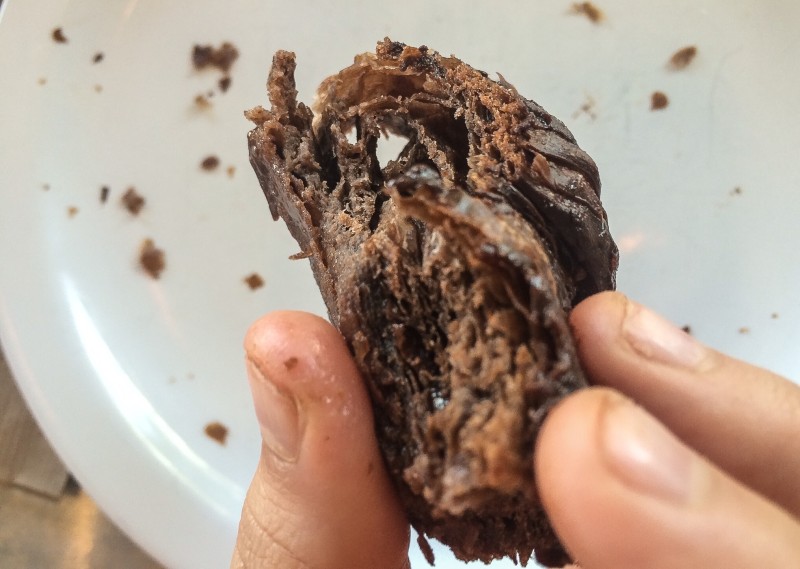 Next came my son’s choice — a whole wheat croissant with bacon, egg and cheese (was it white cheddar?). 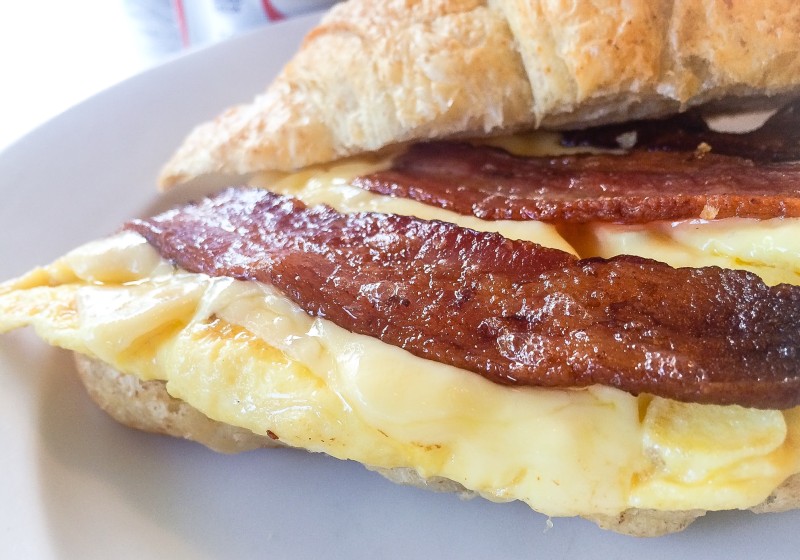 No gripes from the Peanut Gallery on this one. Feast your eyes on a rich, flaky pastry embracing perfectly cooked eggs, crisp meaty bacon and a sinful ooze of cheese. Oliver, a hulking man-child if ever I’ve seen one, ate it in about three bites, a meal that would tide over most humans for the day. 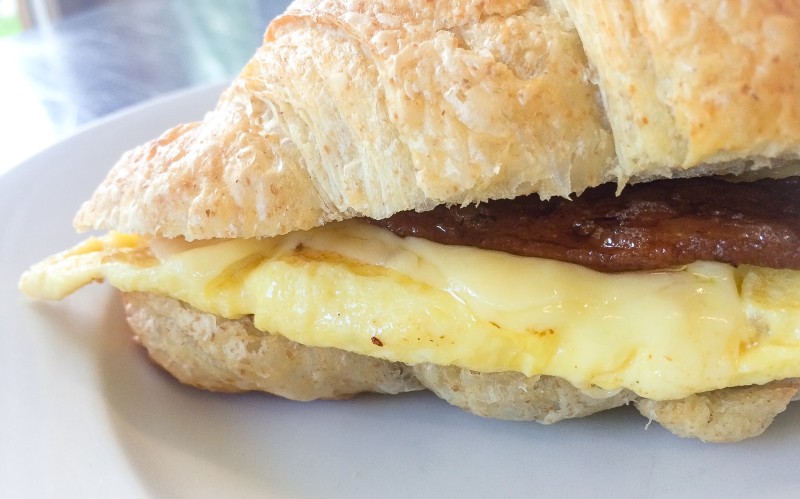 Me, I had trouble deciding between a bevy of unusual bread beauties, pastries galore, and various breakfast offerings. 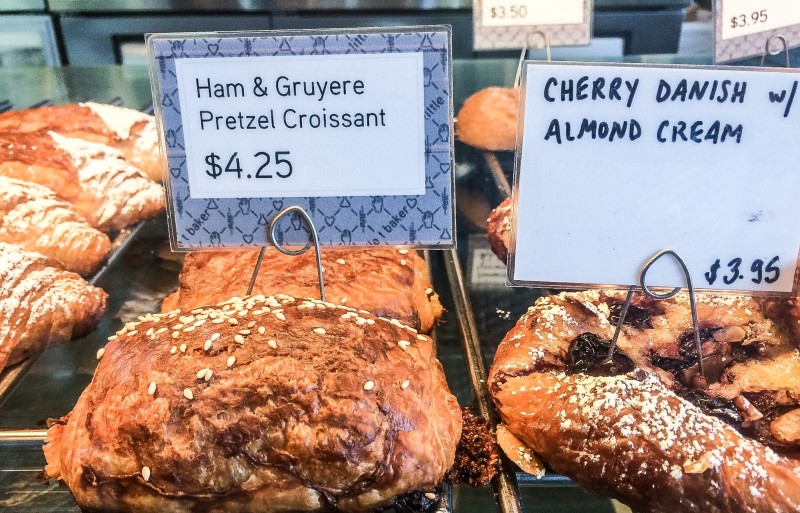 Look at the crust on those babies. There is some serious baking going on here.

Their cookie selection was one of the most visually appealing I’ve seen around town; not so much for how they were presented but because each one looked like it would taste amazing. Sometimes you can just tell looking at a baked good how good it’s going to taste. 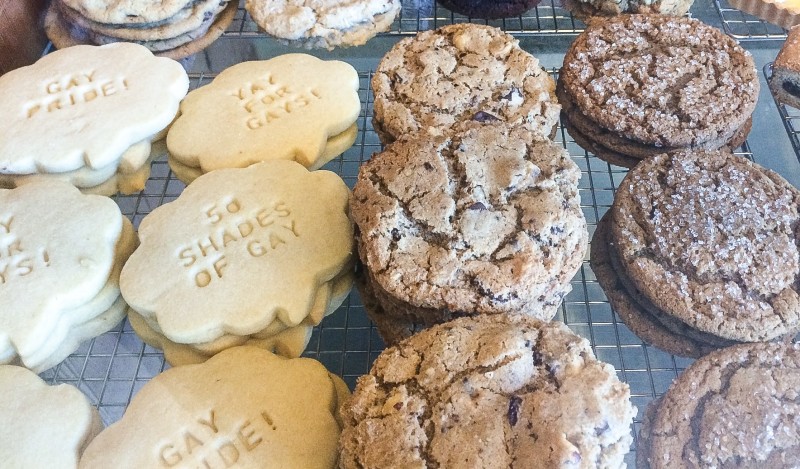 I want to learn how to make stamped cookies. Anyone care to guess how easily to do something like that from home?

(The possibilities for that would be endless.)

While I tried valiantly not to become overwhelmed by all the amazing baked goods around me, I noticed a little somebody who perhaps wanted to try these goodies even more than I did.

And was demonstrating infinitely more patience. 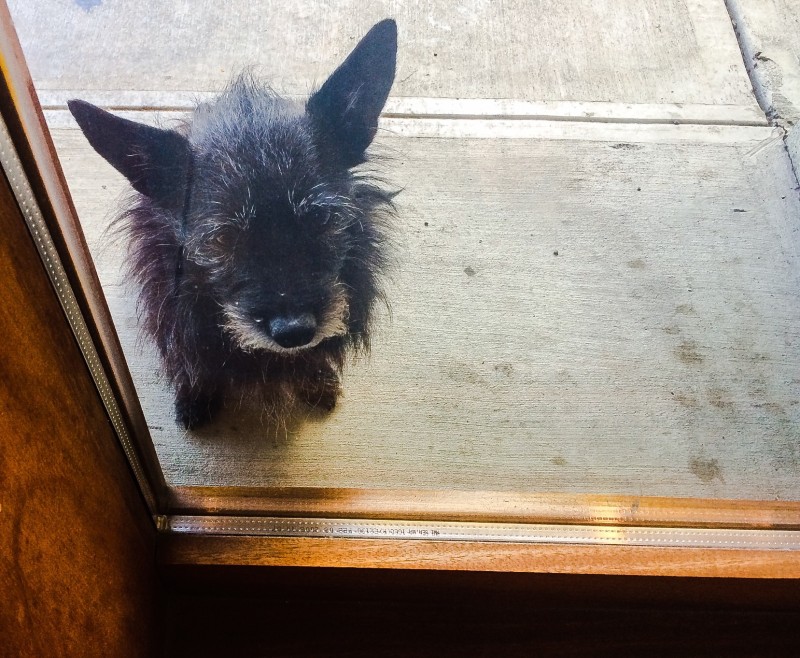 Shadow belongs to the two guys in the first photo; apparently she goes with them everywhere and even though the door opened approximately three dozen times while she was outside, not once did she cry out or attempt to join her owners just a couple feet away inside. What an amazing little girl she is.

Even through the scuffed glass door you can see that there’s so much going on in this dog’s brain. 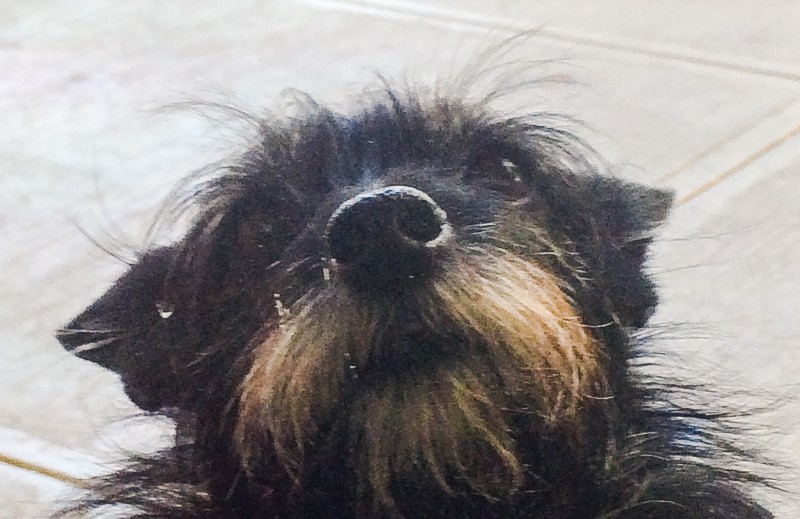 Okay, go time with my own decision-making. I ordered two things, but I was willing to share. 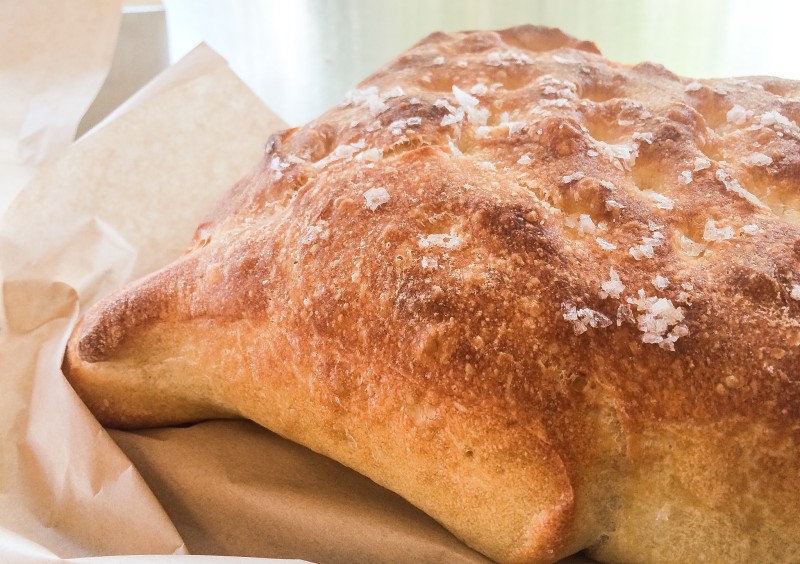 The focaccia was outstanding — an ample loaf with an airy crumb with the richness of olive oil in every bite and a very generous flaked salt exterior. It was the probably the best focaccia I’ve ever bought (with New Seasons and then Pastaworks versions taking the number two and three spot).

I’m in love with this loaf, and the fact that mine arrived still warm made it even better. In the thirty minutes or so we were there, twice I saw warm loaves arriving straight from the kitchen to the counter up front; what a fabulous thing to have loaves arrive piping hot throughout the day.

I am daydreaming of all the sandwiches I want to make with it.

Lastly, a cookie. How to decide when they are so many stunners vying for attention?

I took the advice from the counter guy and ordered a whole wheat cookie with chopped Oregon hazelnuts, Woodblock chocolate and Netart Bay’s own Jacobsen salt. 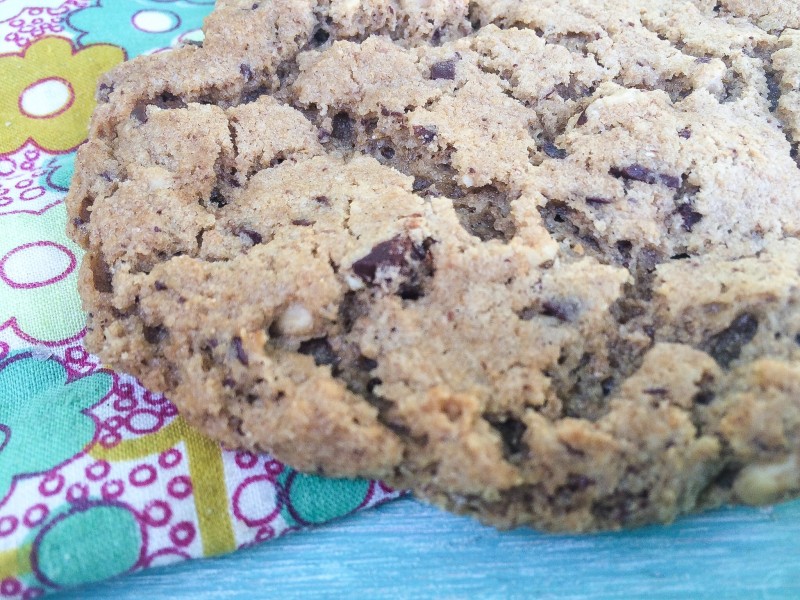 You’ll have to forgive my earlier skepticism for whole wheat flour in cookies; too many times before I’d been burned by other’s attempts to make a healthier version of a cookie with this flour and they all were disappointing. Okay, they were dreadful.

Having had this cookie, however, I now get what all the hoopla is about; whole wheat adds a certain gravitas, a heft to a cookie and seems to add to the overall nuttiness and chew. In this version, chopped hazelnuts were prevalent throughout and the clearly-superior chocolate elevated it even further.

This cookie was fabulous — and with each bite I was more intrigued. And impressed. 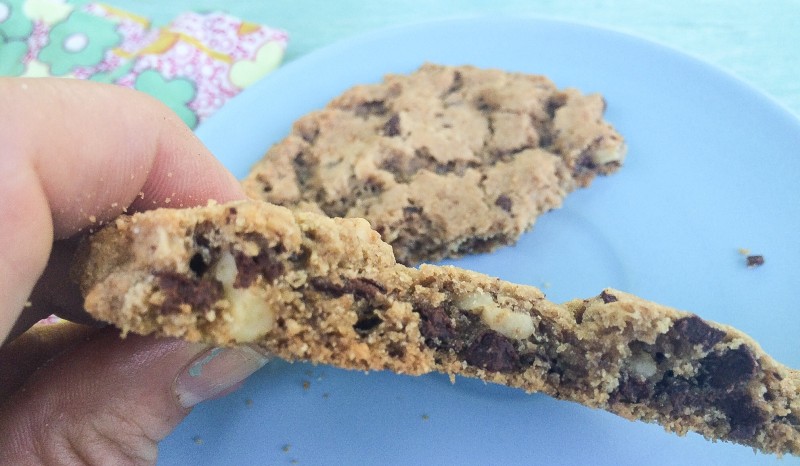 This one was not shared — sometimes a girl just has to have her own thing. Besides, my kids had quarreled on the way over (this drives me bats) and so they didn’t deserve to partake of such excellence (they were just lucky that I softened enough to share the focaccia later).

Even with so many outstanding bakeries in town, I will definitely be back to Little T — either this one, or the newer one downtown around 10th and Burnside on Union Way.

I will go for another cookie, the salted brownie and perhaps the compelling pretzel roll — and hope miraculously for another glimpse of my buddy Shadow.