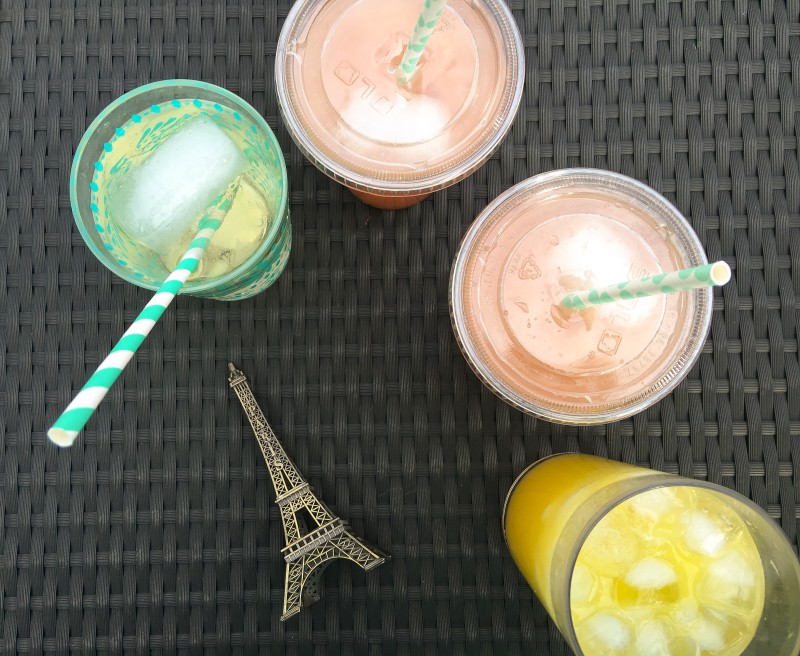 The last four days have been a complete blur  — and with 48 plus hours under my (tightening) belt,  I finally have a few pics to show you.

As I toggle back and forth between English and trying out the bits and pieces of French I remember (plus a  soupcon of jetlag), I will skip most of the running commentary and focus on the best part.

Just a few Paris pics until I fully come up for air. 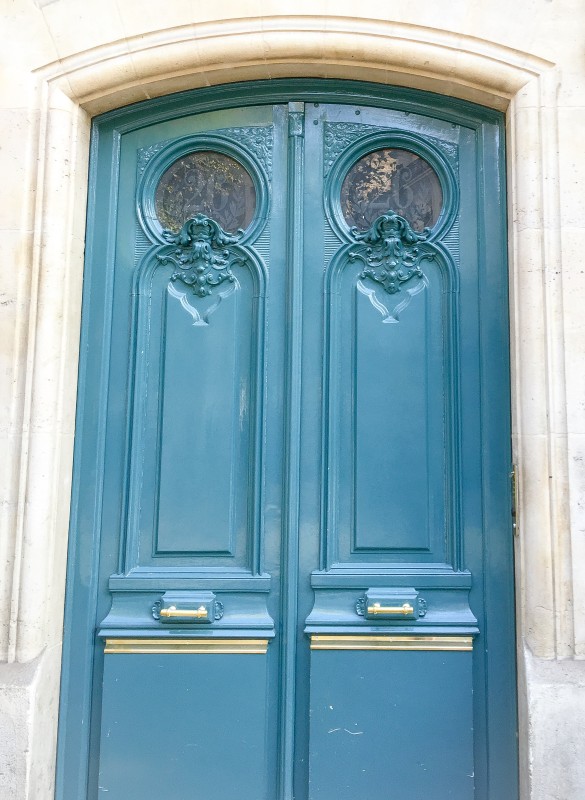 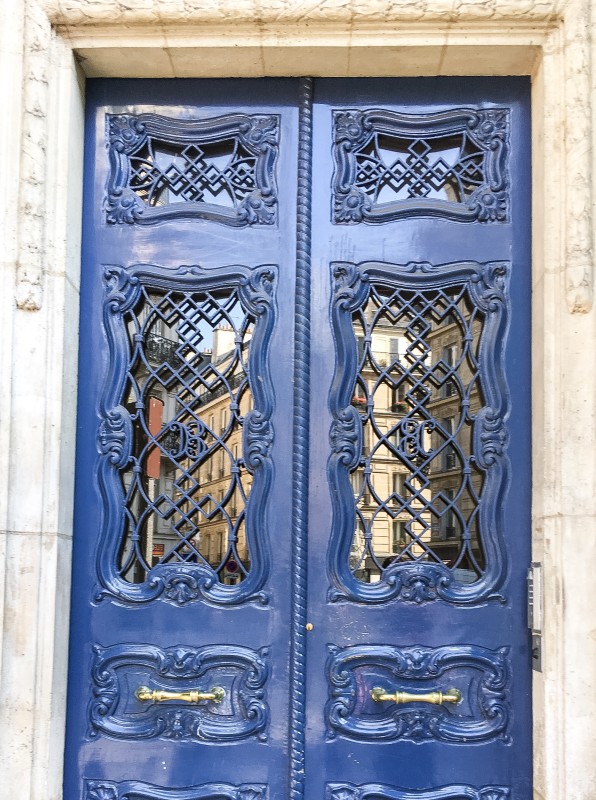 On the recommendation of one foodie friend as well as Parisian food guru/bakery genuis David Leibovitz, we spent a couple hours at the Place Aligre and food market– and bought sacs and sacs of amazing food. 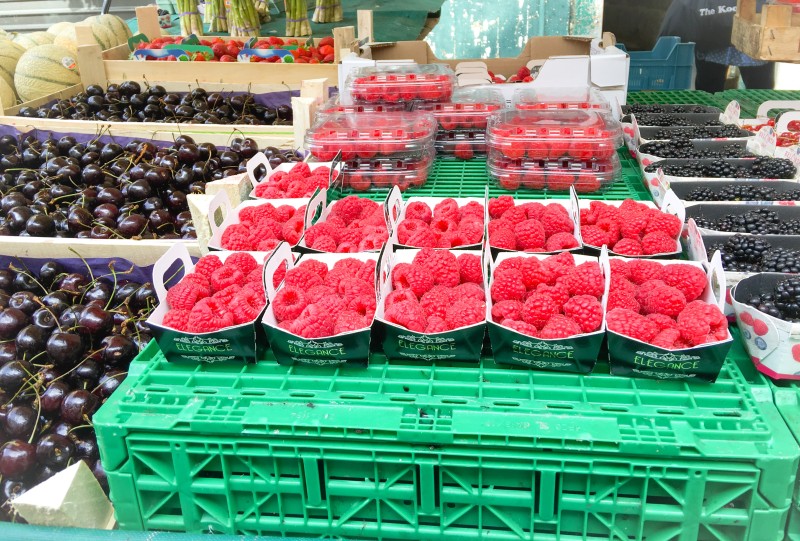 We ended up with cherries, raspberries, avocados, cucumbers, endive, curly lettuces and some of the sweetest strawberries I’ve ever had (they taste much like Oregon varieties but with an even shorter lifespan, apparently). 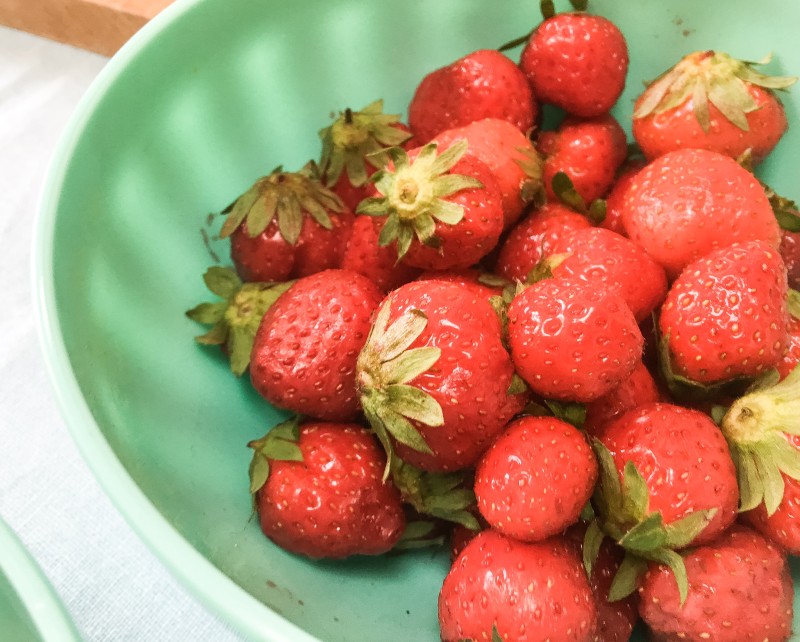 At the same market I bought innumerable cheeses, and made buddies with the fromage guys. 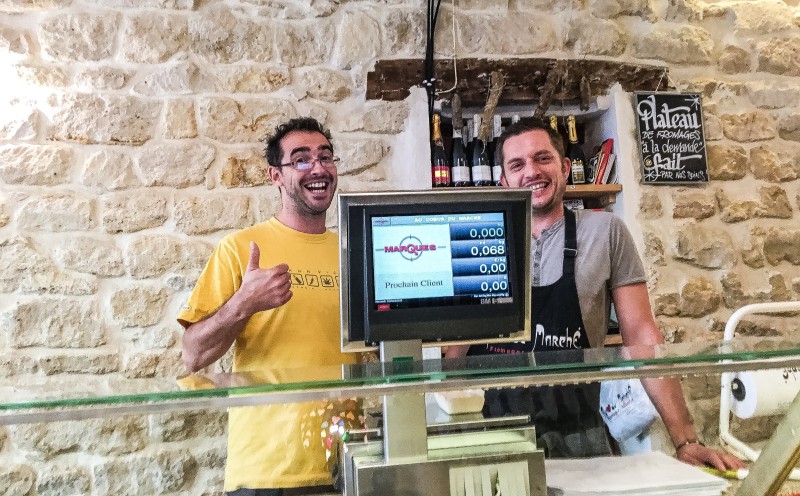 I came home with two pounds of various cheeses  — and they were all spectacular. 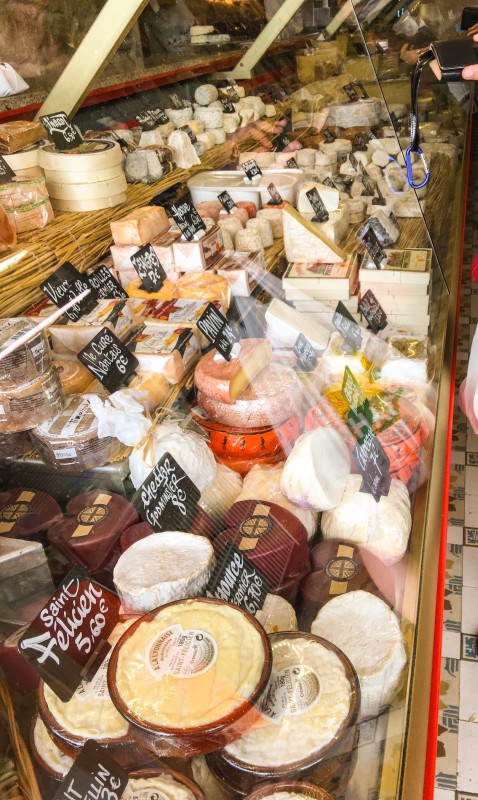 Plus I tracked down this butter. 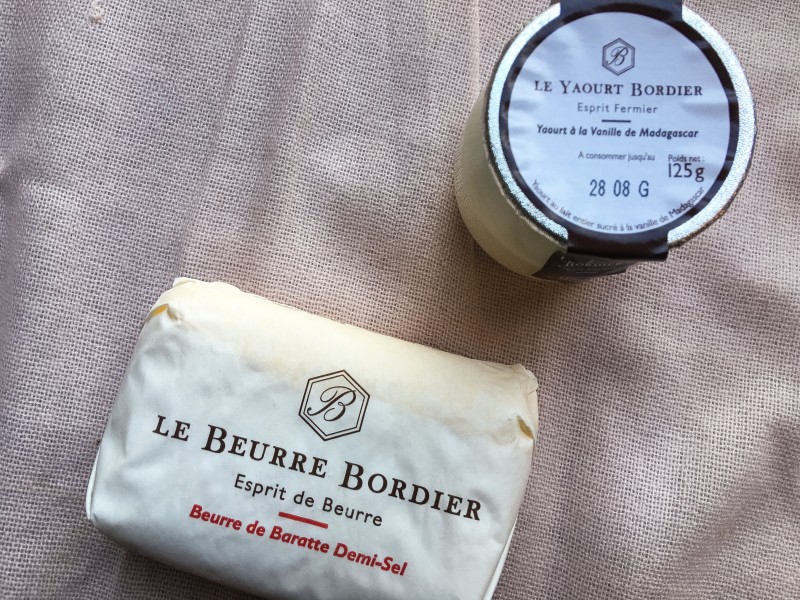 I’d been reading on-line that Bordier produces some of the best Normandy butter available — and seeing that yogurt was also available at a very small second cheese shop,  I bought some of that too.

I bought salumi (truffle garlic) on this street and three and a half pounds of olives from yet another  recommend spot from Monsieur Lebovitz  (I’ve become quite the food cyber stalker).

I also bought two of the recommended rotisserie chickens (as mentioned in another foodie find, “I’ll Have What Phil’s Having”) and two pounds of lovely peeled potatoes that took on a  lovely saffron hue and and then are anointed with the drippings of the blissfully crispy birds. 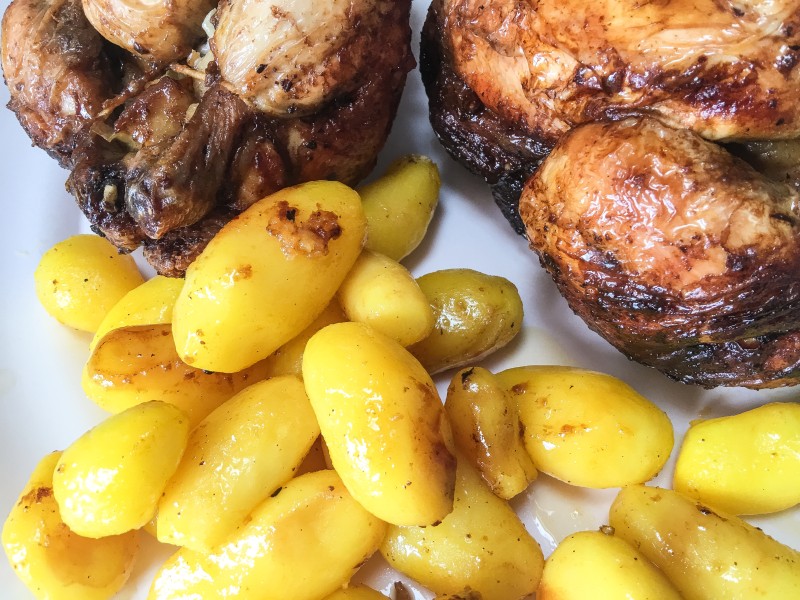 Already having been to two boulangeries in our travels:  Poilane 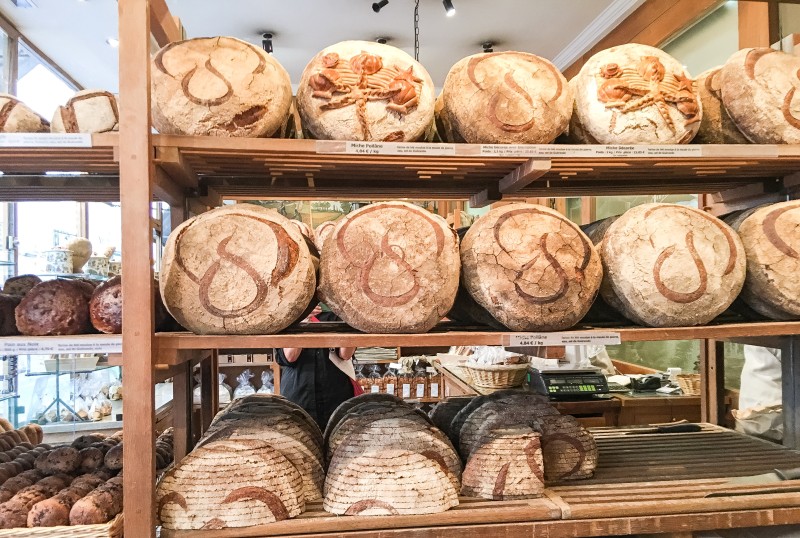 and Eric Kayser — I finally felt like we had enough food to get our spread on.

Think we had enough food? This is just the beginning of it. 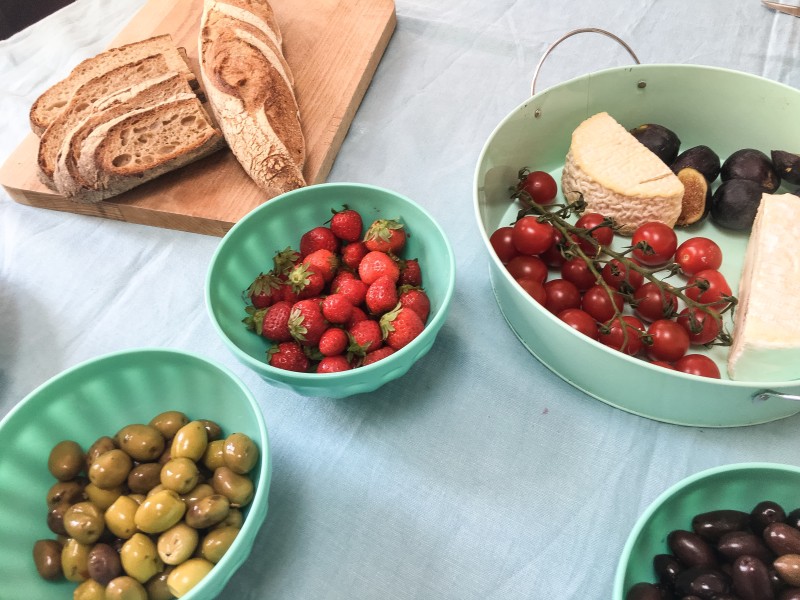 Now back at our flat, a lovely two bedroom flat in the heart of St. Germain de Pres — we ate and talked and laughed and then ate some more. 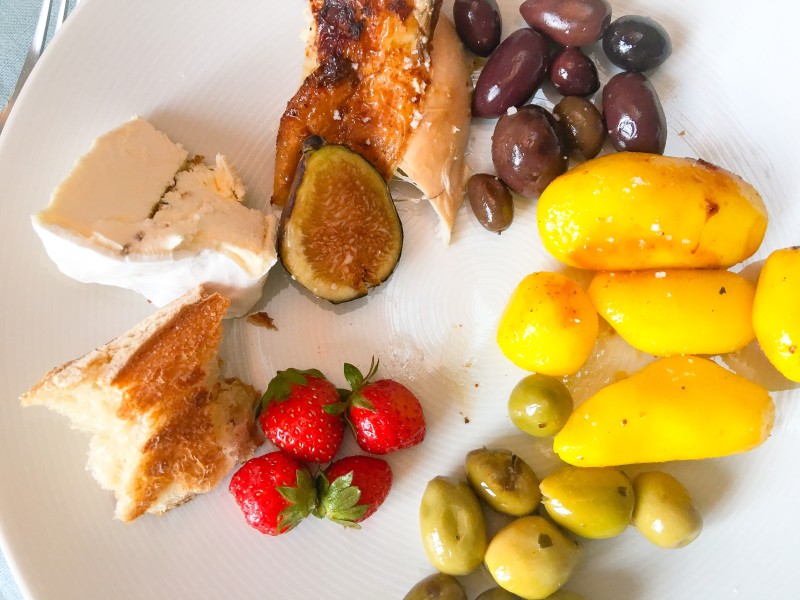 Afterward, there was nowhere to go but up.

To our roof deck.

Now granted  — it’s a very steep walk up an interior ship ladder off the living room (the ascent of which exacerbates my fear of heights to no end) but once up there, we have the place to ourselves and there is a 360 degree view of Paris.

Yes, it’s like being thrown into Aristocats. (Am I so old that I’m the only one who remembers this?) 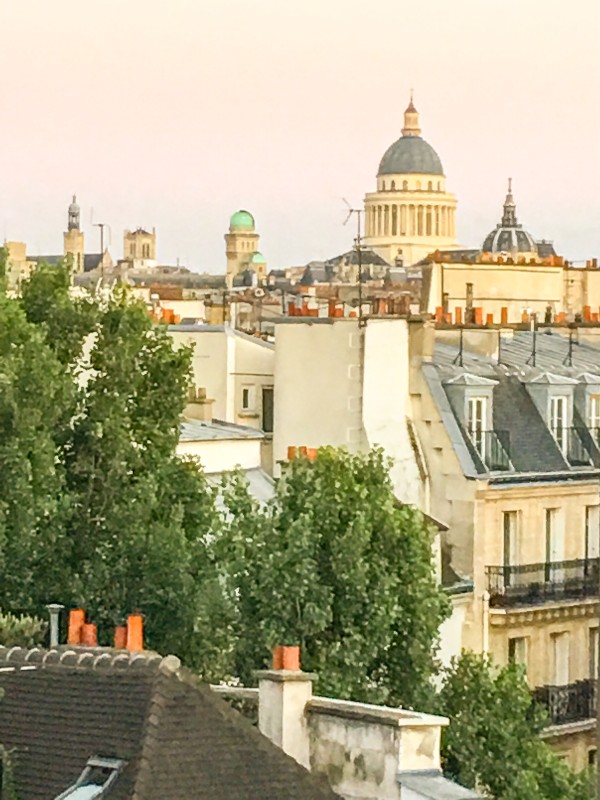 So that’s the first food days…

Great street food — like gyros and crepes and killer falafel, eaten on the banks of the Seine. 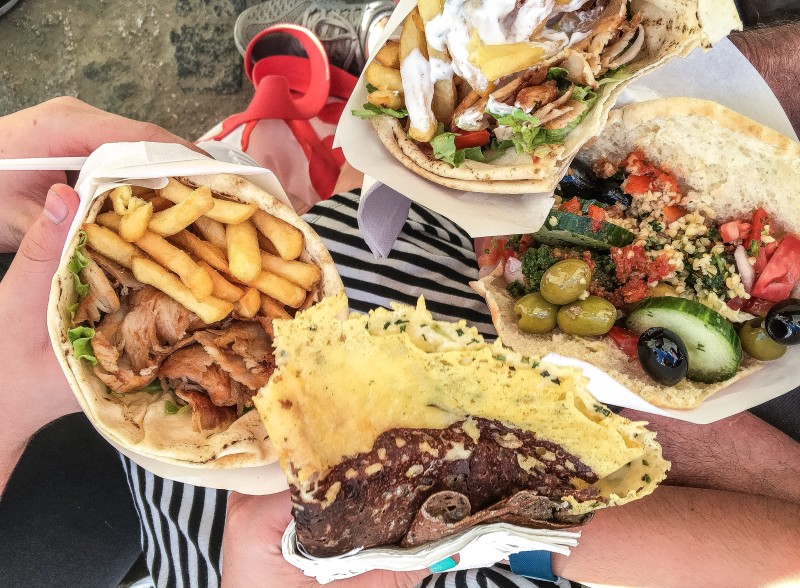 Picnics out during the day and later ones with different treasures inside at our big long table –all enjoyed alongside so many wonderful wines and breads. 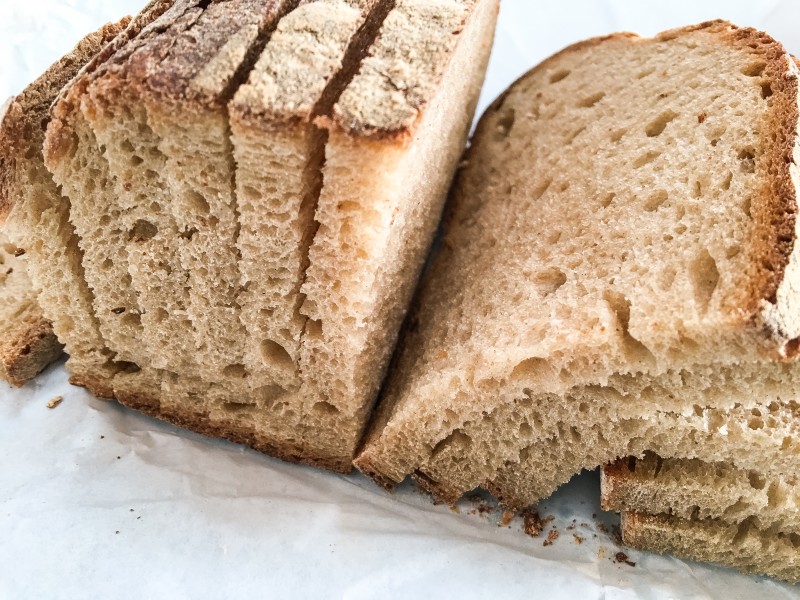 And for friends and loved ones back home, a big yeasty, crunchy edible hug from us to you. 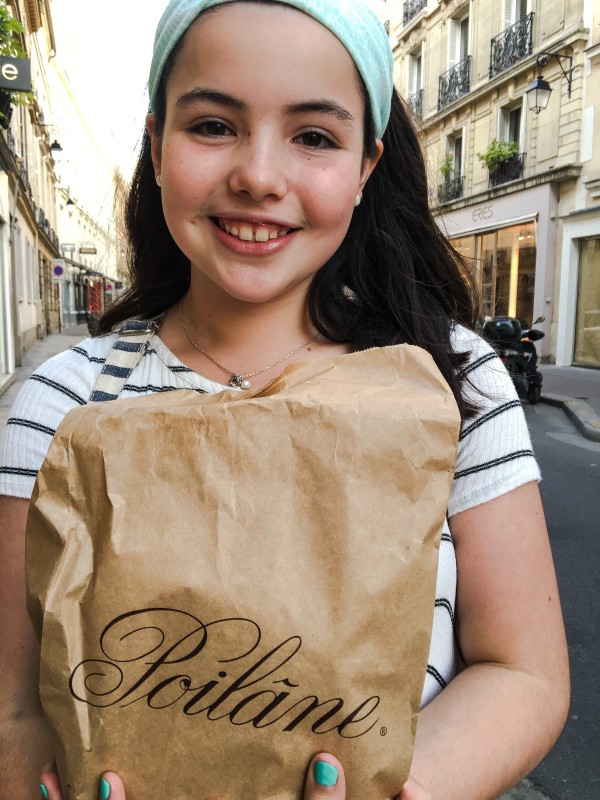 « BLACKBERRY BLOWOUT AND BLAST OFF TO VACATION
PARIS, THE MUSEUMS — THE INITIAL ROUND »