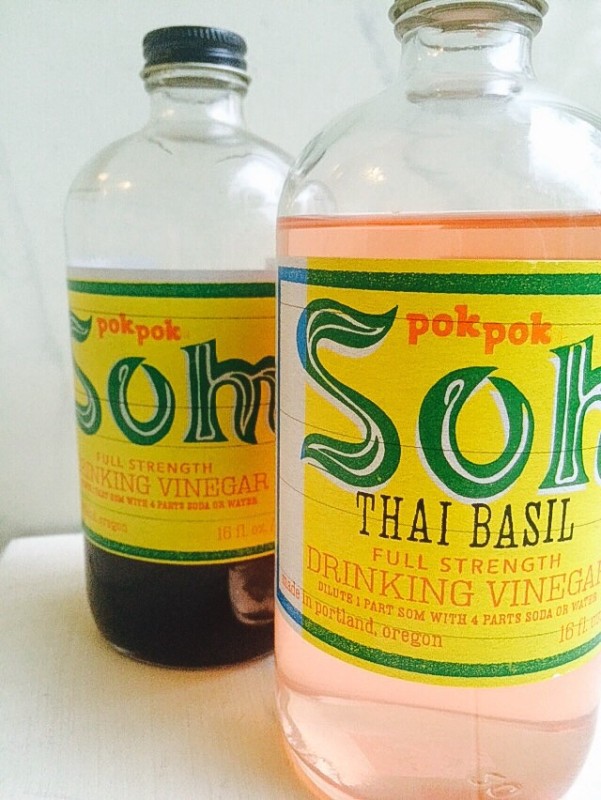 Do you know how the world can divided up by blood types?

I think the same thing holds true in the eating community; people are either Vinegar Positive or Vinegar Negative. You are either in love with the flavor of vinegars — and usually all of them– or you are vinegar adverse, and you eat them only begrudgingly, and typically only when cloaked heavily with the flavor of oil tamping out most of the acidic notes (I have one friend who hates vinegar so much she only eats salads with creamy dressings). 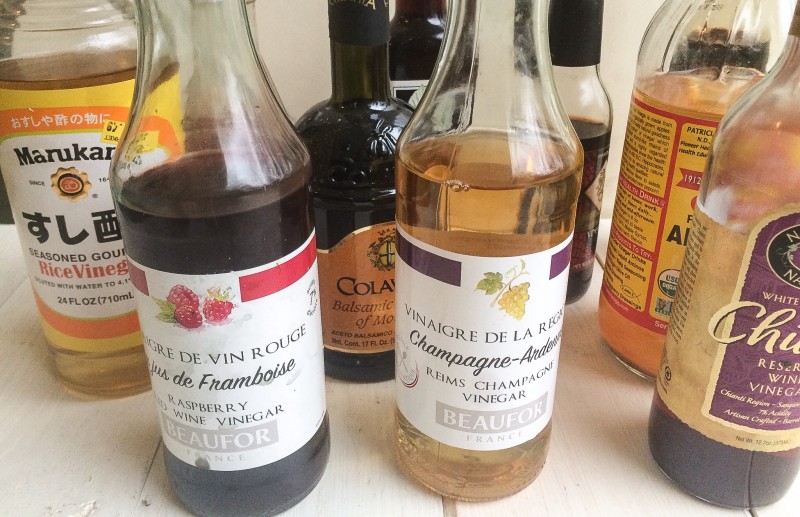 Me, I’m crazy for vinegars, and at this very moment I have these in my arsenal: sherry, red wine (both plain and aged Chianti), white wine, tarragon white wine, lemon, balsamic, rice (both regular and seasoned for sushi making),  raspberry, pomegranate and apple cider (above pic is just a partial roster).

I also aged 2 gallons of red wine vinegar and it’s sitting in my pantry (one infused with shallots, the other with herbs from my garden), strained and waiting for the next ten years or so of salads. Or Armageddon. 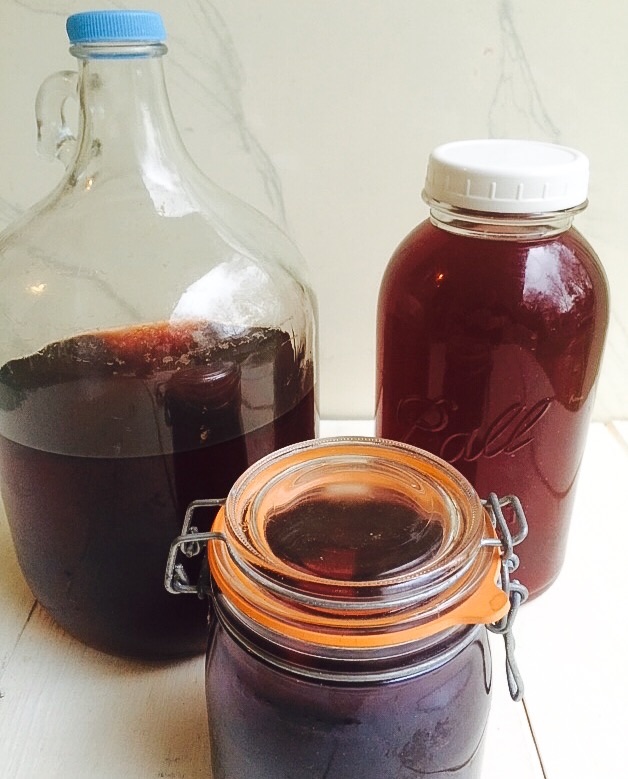 I am so crazy for vinegars that on occasion I even sip apple cider vinegar; I have read that just a couple tablespoons can do wondrous things for all  kinds of ailments, and because I like that taste, I figure that a tiny bit every now and again can’t hurt. Heck, it might even go mano-a-mano with all the crazy stuff I throw in my body sometimes. 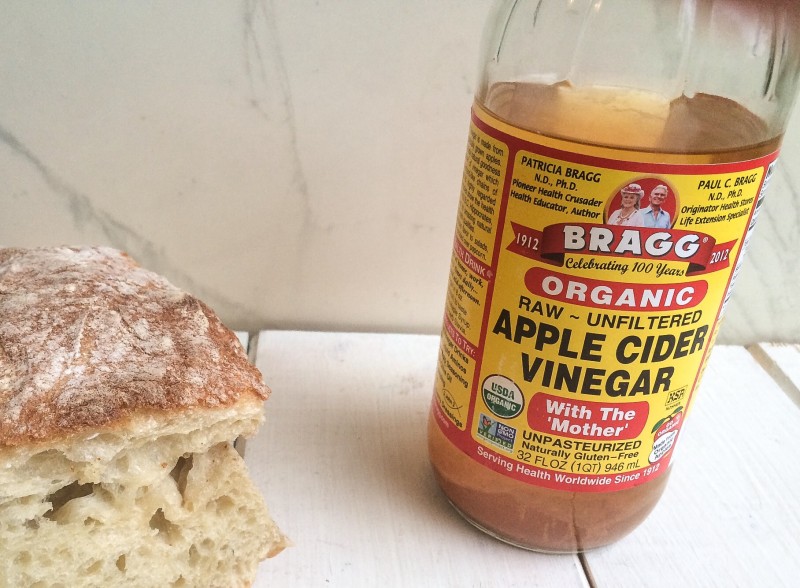 So when I went to Pok Pok  a couple years back (for those not familiar, one of our most famous and esteemed restaurants that serves ground-breaking Thai food), I tried one of the cocktails they served there that featured a drinking vinegar. For the life of me I can’t remember what all it had in it (I have vague recollections of vodka and pineapple?) but it was delicious, and it had just the tiniest bit of tang to cut through the boozy haze. I loved it.

Now that the restaurant sells these drinking vinegars retail around town, I couldn’t help but pick up a few — one last year, a couple for a friend’s birthday last month, and another one for me last week. I haven’t yet figured out the best way to dabble with them in the cocktail world, but I love a tablespoon drizzled into sparkling water or club soda. It’s just enough to awaken my palate and keep me intrigued enough to keep drinking water (always a struggle to get those eight cups a day down).

Next up I think I will play around them; as they are sweetened slightly, they might be good in small amounts in a marinade or as a vinaigrette booster. Having tried the Thai basil, I can imagine it would work really well with chicken; I like the idea of this vinegar and garlicky oil infusing the meat, giving it a quick grill and then serving it with rice noodles and pickled cucumber (and then eating so much that I have to lie down). 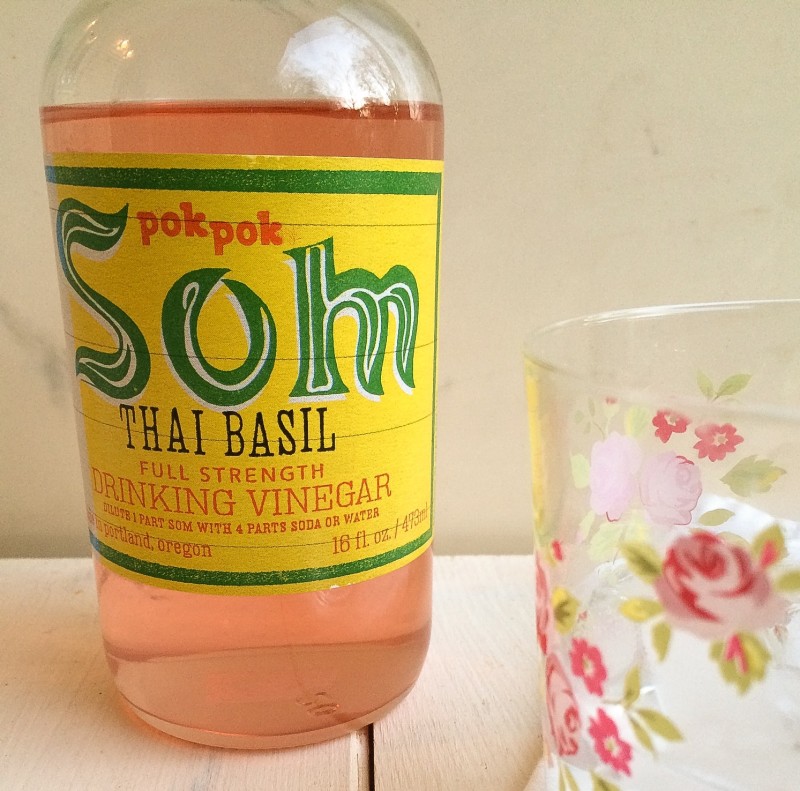 Even the bottle makes me smile. It reminds me of food packaging I saw in Bangkok — bright, crazy graphics and beautiful fonts of mysterious letters. Doesn’t it just look like it might be the start of something interesting?

Change starts with me. I guess it’s time to get out that bottle of bourbon and get mixing.