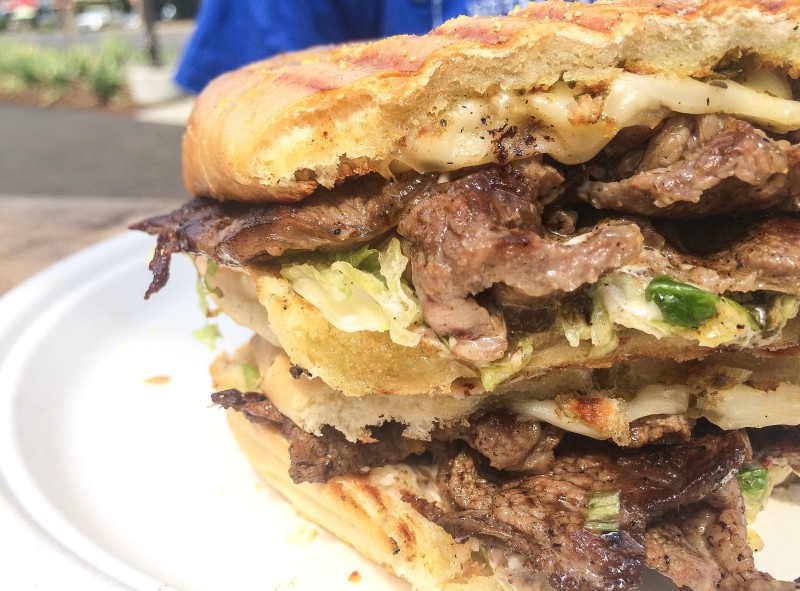 Every burgeoning business slaves for it, prays for it — and then waits to see if it will ever happen.

I’m talking about the moment when recommendations start to go viral and perhaps bolstered by a smidgon of press, a narrow window of opportunity opens.

In that brief window of time, the business gets to play to an audience outside the immediate neighborhood and hopefully finds the necessary traction in order to survive in a sea of worthy competitors.

They’d best grab the opportunity fast — and nail it!— before a restless crowd moves on to the next big thing.

Portland Mercado is having that moment now. 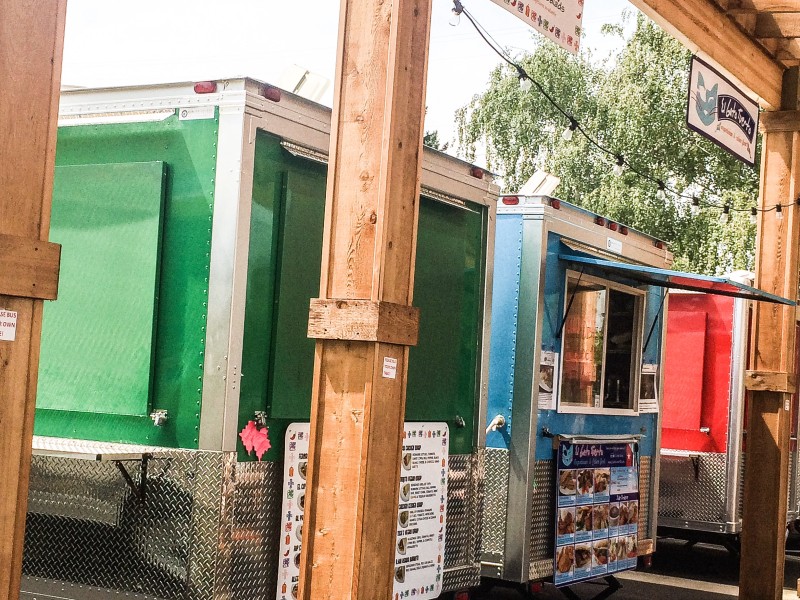 I’d heard from a couple pals about this convergence of food trucks and small market hall on 72nd and Foster, and I’d been reading about Portland Mercado on both Pinterest and Portland Mercury.

It’s gotten a bit of press lately as it’s the first Latino public market in Portland and an incubator for all kinds of Latino start-ups and entrepreneurs.

Yesterday afternoon I grabbed a pal and our kids and we went in search of some tasty fare.

Boy did we find it. 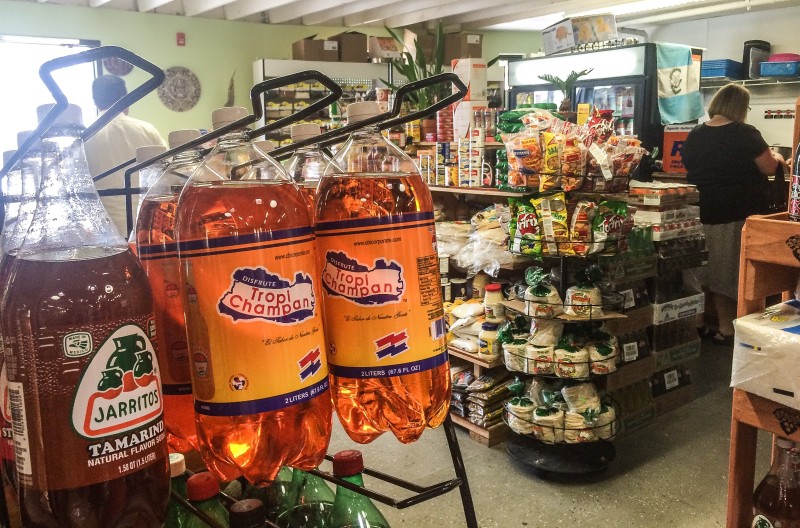 Inside the pristine hall is a butcher shop (boasting some serious looking chorizos and meats), a mini-bodega like shop of specialty Latino products, a fruit and juice snack shop, mini brewery and wine shop (not open at lunch that day) and a little sweet shop specializing in Mexican candies and treats.

The kids thought the candy corner was a riot; all those unusual flavors straddling sweet and sour awaiting them —  and, as it turns out, some even see-sawing sweet and savory.

I knew I was falling short on my kids diet. Little did I know what was missing was just waiting there for us in the Mexican sweet shop. 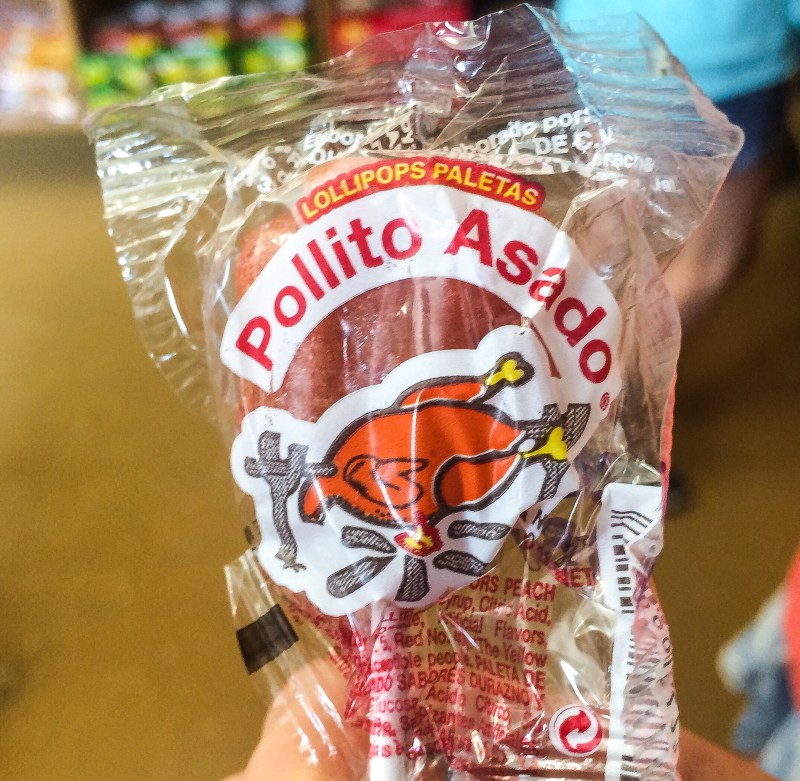 A roast chicken lollipop of course!

(Why sit down and eat a meal when you can put it on a stick and take it to go? Same ideas as the gum in Willy Wonka’s, I guess.)

But let’s just focus on the main event, shall we? We had come to pound some tasty vittles — and a lovely shady eating area awaited.

Even with four of the eight carts closed that particular day, there were still lots of options (I gather from the website that on Mondays and Tuesdays the carts take turns giving each other a much deserved break).

First up, we ordered from Las Adelas, a cart doing a brisk business, even on a hot Tuesday.

This is what was ordered. 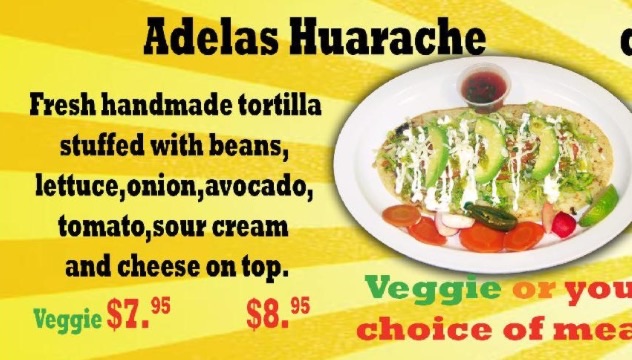 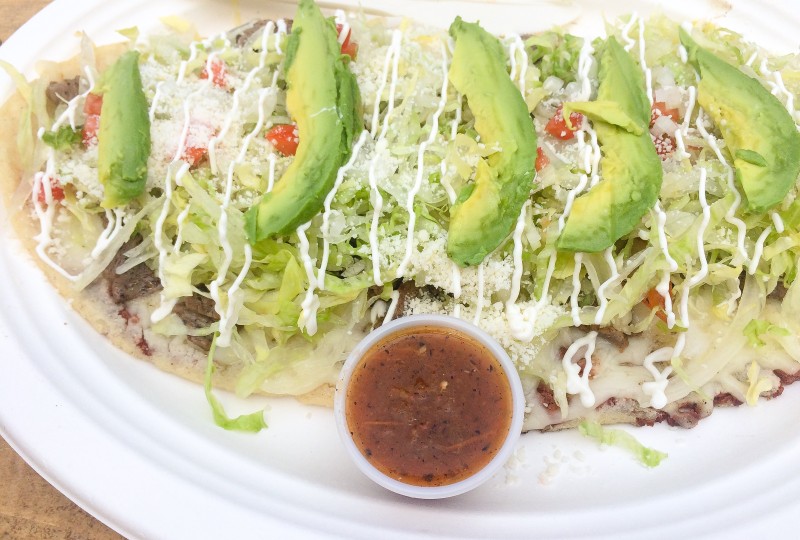 It was huge — enough to feed two handily — and a deal at  just under $9. The homemade tortillas hugged the melted cheese and created the perfect platform for all the goodness atop it — toothsome steak, black beans, lettuce and luscious avocado.

Adelas Huarache, I think I love you.

Next up, fixings from Mixteca. 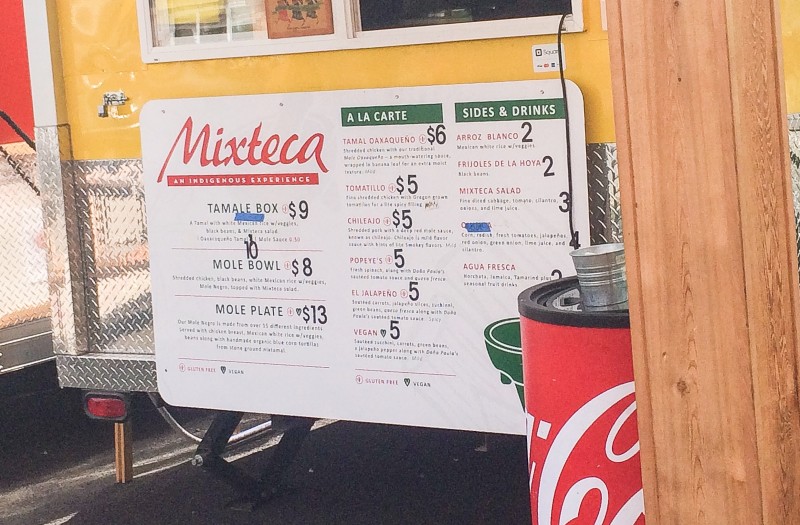 I was torn here between the tamales (the Oregonian raved about them) and the mole bowl (why can’t I have a second stomach in moments like these?) but ended up getting the owner’s favorite — the latter.

What a wise choice that was. 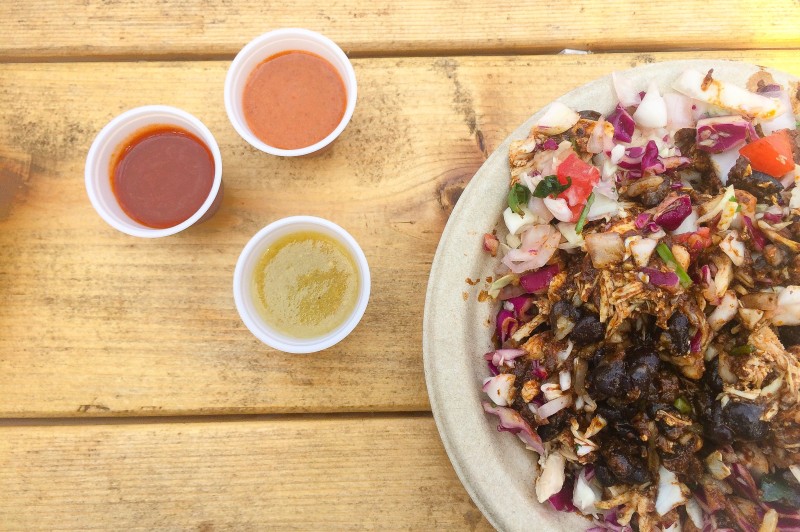 Handsome shredded chicken is topped with an expert mole. This is then served atop rice and black beans and a sprightly cabbage salad adds a welcome levity and brightness to the dish.

I couldn’t believe how balanced and smack-down tasty the mole bowl was.

Who would ever go through the laborious process of making mole when one as delectable as this one awaits? (My friend Elona walked me through the process at lunch that day and I was exhausted just listening to all the steps).

Eight dollars was the meager price for such a princely meal. So delicious! 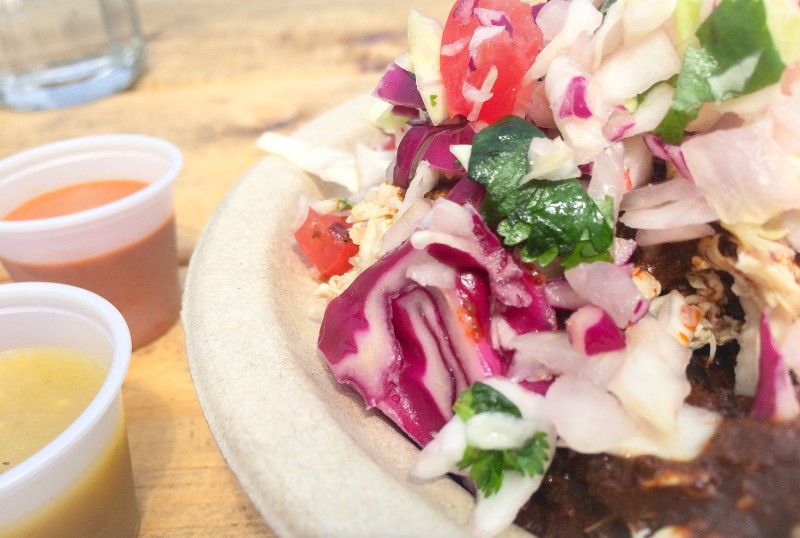 I can’t wait to try the tamales next time; if they’re half as good as the mole bowl, I’m going to be jumping on the picnic tables like an Orangutan on a cake pop high.

And then there was the last cart we hit.

And man, we hit it hard. 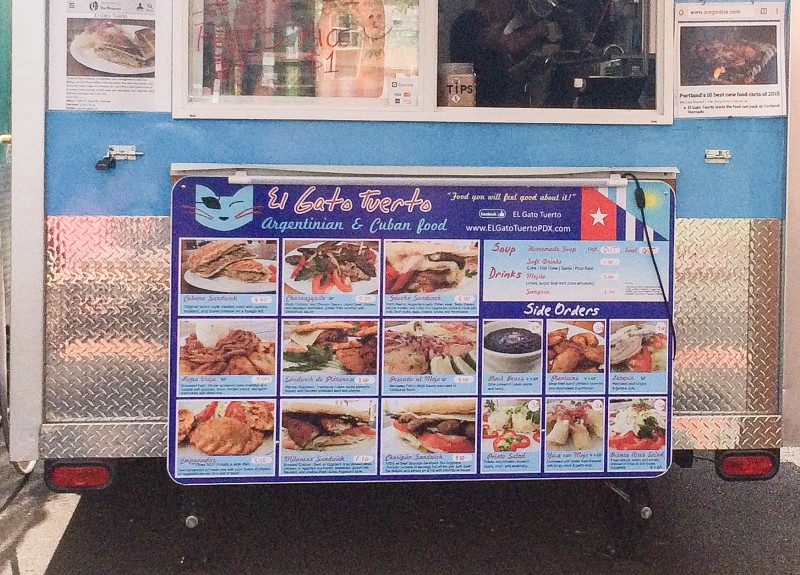 Apparently, this is run by two guys (one Argentinian, one Cuban) and evidence of their culinary heritage is sprinkled throughout the many fantastic offerings — pressed sandwiches, smoky black beans, fried plantains, grilled meats, chimichurri, and so on.

Difficult as it was to pick just one dish, we settled on the Gaucho Steak Sandwich with grilled steak, Swiss cheese, onion, tomato and lettuce on a grilled panini.

The steak was still hot, seasoned perfectly and sporting the char of a hot grill. The cheese oozed and the bread soaked up all those sumptuous juices. It was beyond.

Oliver ordered it and he looked positively stricken when without warning I walked up to him, grabbed it out of his hands, and took the biggest bite I could fit into my craw. He looked at me, first stunned by the unforeseen attack, and later ticked off. Say what??

Have you seen the video of the South African surfer attacked on live TV by the shark? My sudden dive for his sandwich was like that. If you haven’t yet seen it, Google it — it’s amazing, and the fact that the guy came out unscathed all the more watchable.

Oliver’s sandwich wasn’t as fortunate, but I say Oliver was just lucky he got that steak sandwich back at all. 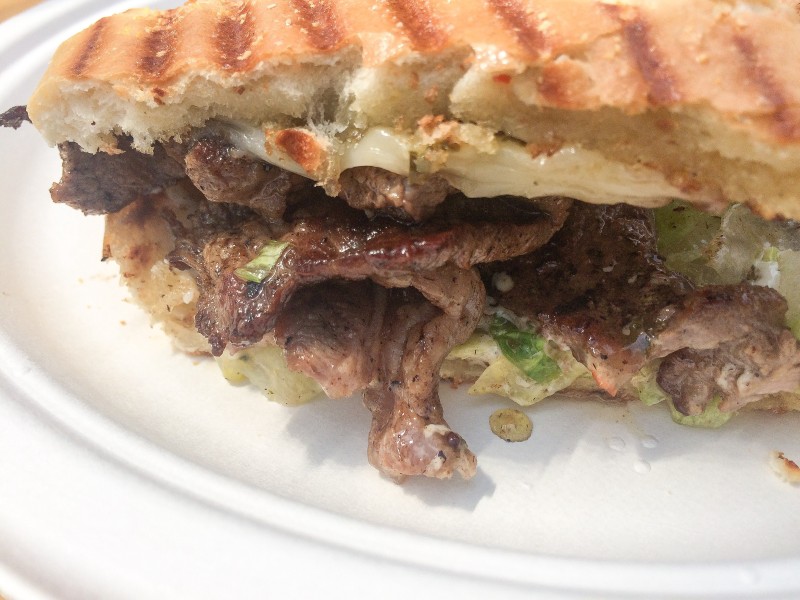 All in all, a very successful venture jam-packed with deliciousness.

I can’t wait to go back — just next time, no shares-ies.