You are here: Home / Chicken / SEVEN TIPS FOR BEST EVER FRIED CHICKEN 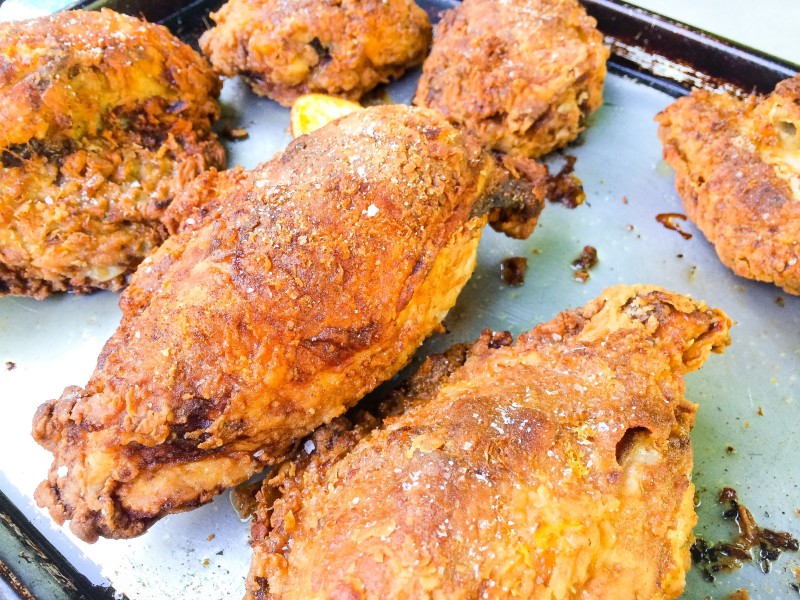 Truly, is there anything better in the whole wide world as homemade fried chicken for a picnic?

The last two weeks have been so busy around here that I haven’t yet had the chance to tell you about the fried chicken I made recently. It had been forever since I’d made it, but the end result was so delicious that I hope I can convince you too to give it a try.

When I finally sat down to eat it, I asked myself – why don’t I make fried chicken more often?

Probably for the same reason that most people don’t.

It’s too hard. It’s too involved. It’s too greasy. Too much work. It’ll make a complete mess of the kitchen. It takes forever to make.

I am going to be straight with you; it is a bit of work but the results are spectacular. Make a batch and I promise you that those around you will look at you in a whole new light. Why?

Because you’ve unlocked the doors to fried chicken heaven, that’s why, and don’t be surprised when weepy gratitude follows the first bite.

I am not going to give you a recipe, but I’m going to walk you through the steps and give you all the tips you’ll need to ensure the fried chicken of your daydreams.

People, are you ready? 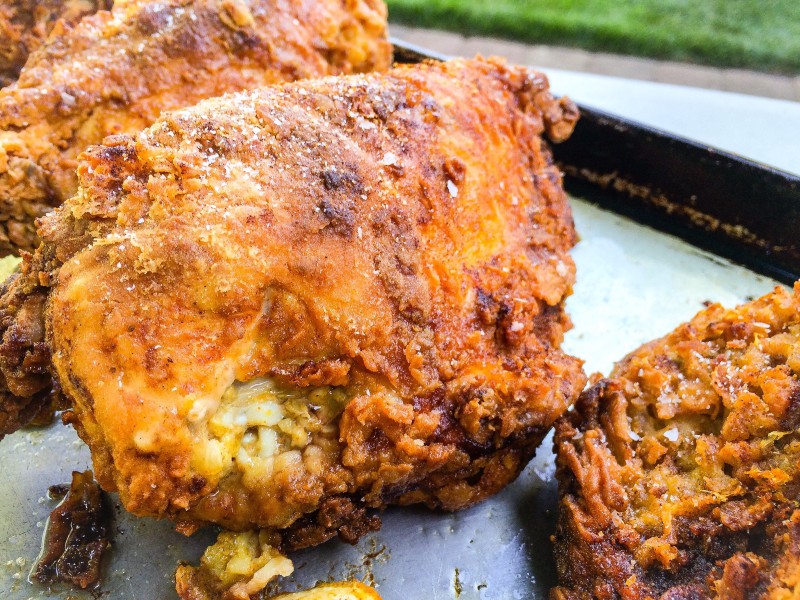 SEVEN TIPS FOR THE BEST EVER FRIED CHICKEN. 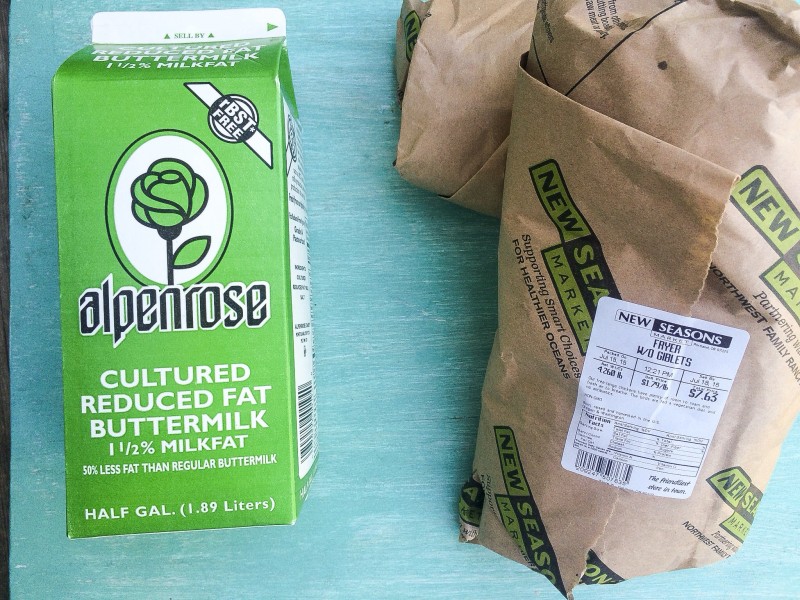 This may seem obvious, but one time I bought the cheaper stuff on sale and made fried chicken and I regretted it. If you are going to all the effort of making fried chicken, you want chicken that is gloriously chickeny.

Don’t skimp. Buy the chicken you’d want to serve your mother-in-law. Or that friend you’ve never had over for dinner. Or Julia Child.

If you have a butcher, have them cut up a whole fryer for you. Not only will this probably be cheaper than buying separate parts, but you will also have a chicken back you can throw in the freezer to add to your next chicken soup.

If you don’t have a butcher, just buy a whole fryer cut up (or if you are in a household that only likes dark or white, just buy that).

I bought two free-range chickens on sale at New Seasons, had the butcher cut them up in eighths, and stored those meaty back bones for later use.

2. While you are buying chicken, buy at least a quart of buttermilk. And fresh spices if need be. 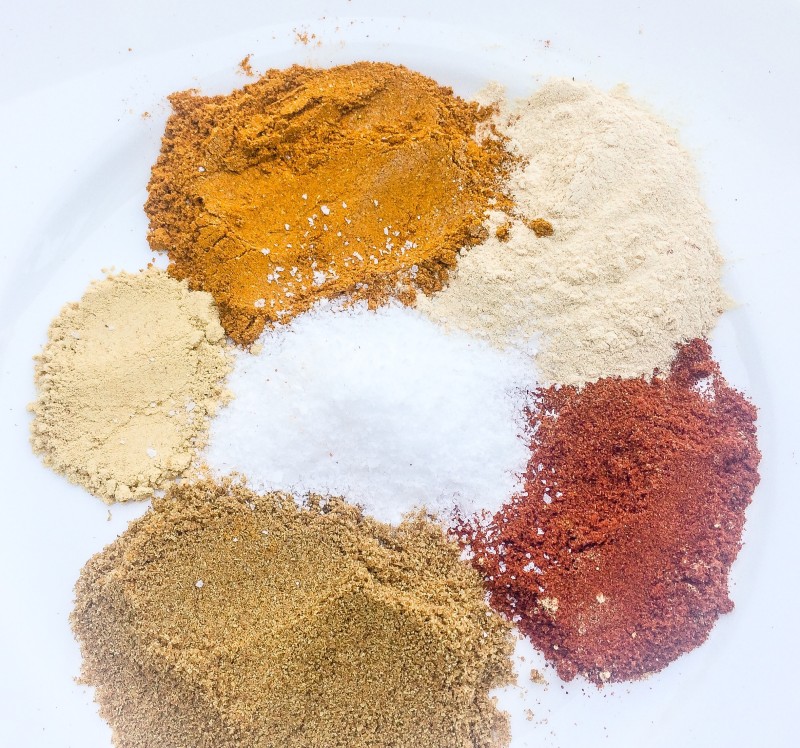 I am convinced that buttermilk is the key to great fried chicken. Not only does it tenderize the meat, but it provides a bit of tang and the all-important moisture to which both spices and flour will attach.  This is crucial.

I hate bland tasting fried chicken, so I seasoned mine to the hilt. I used the following spices to flavor my chicken: curry, garlic powder, smoked paprika, cumin, dried ginger and salt.

I mixed them all together and rubbed it into all the chicken before adding the buttermilk to my dish.

3. Allow the chicken time to marinate in the buttermilk and spice blend. 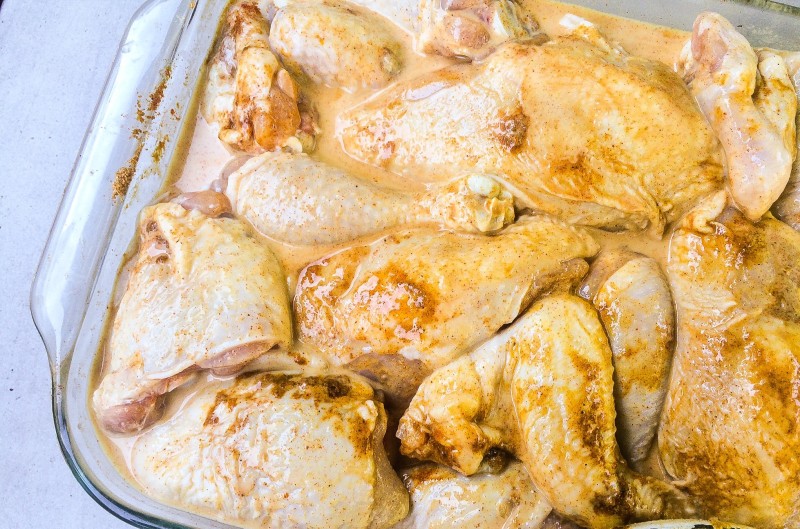 If you only have an hour to so to marinate, that’s okay. If you have longer, even better.

In the case of my fried chicken, I bought the meat one afternoon and fried it up the next, and this full day dunk in the spice and buttermilk blend meant it was fully primed and ready to go.

4. Pre-fry care is important; the right oil even more so. 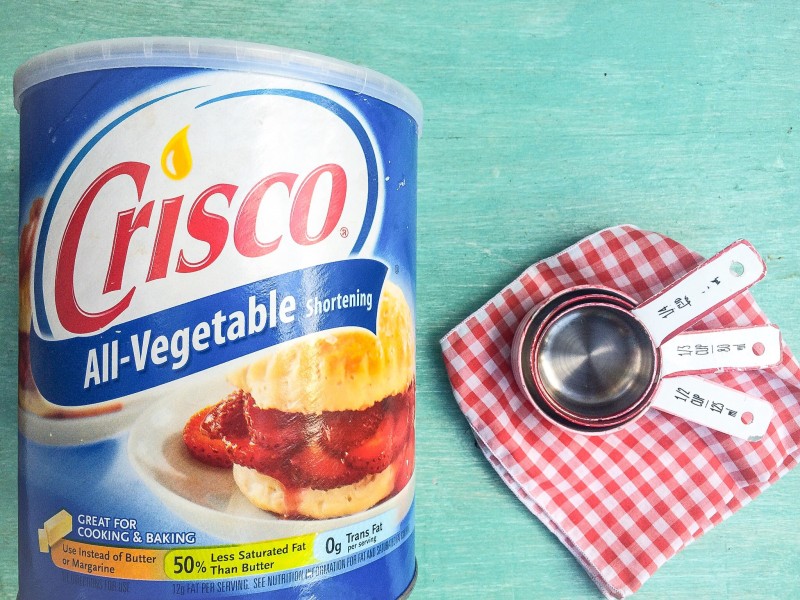 Let the chicken sit out for a good half hour to forty five minutes before you fry it; if you cook it fresh from the fridge the chicken is going to be really cold inside while the outside is already crispy up.

Take the chicken out of the thick buttermilk spice mixture and dredge the heck out of it in flour. Don’t be skimpy –you want every little nook and crevice of your pieces to be covered. I recommend doing all the flouring before you even heat up the oil; this way the chicken can rest for a few minutes and you won’t be distracted flouring and frying at the same time– and you won’t have goopy hands making a mess everywhere.

Heat up your oil. I know you could use a couple different oils, but I’ve always found Crisco works best. There’s a reason that Southern cooks always use it — it crisps up your food beautifully and has a high enough cooking point to get the job done.

Don’t overthink it. Just get the Crisco.

And no, you don’t need to get the same six pound container I did — I am just funny (compulsive) that way.

5. Don’t rush, don’t overcrowd, and let the oven be your ally.

It’s not complicated — you just think it might be. I like using two pots at one time (in this case I used a cast-iron skillet and a Dutch oven), and if you are using a pot with a high-enough lip, your stovetop won’t be splattered with grease.

Don’t rush — good fried chicken takes time. Put on some great music and get your groove on while you fry.

Don’t overcrowd the chicken — that lowers the cooking temperature and you risk messing up your coating. Cook just a few pieces at a time.

And here’s where I like to mix it up from traditional recipes.

I only fry so far as to crisp up the skin on all sides and then put it into a 350 oven to finish it up.

Doing this means you don’t need to worry about undercooking the meat (or overcooking the skin while you are ensuring proper internal temperatures).

I find that this method is fool-proof every time.

This also allows it a second chance to crisp up further. I usually cook wings and legs about  for about twenty five minutes, and thighs and whole breasts thirty to thirty five minutes.

And if you’re really smart you will fry the largest pieces first, then drain them on paper towels and then put them in the oven and then fry the smaller pieces and boom! All your pieces will be ready at the same time. 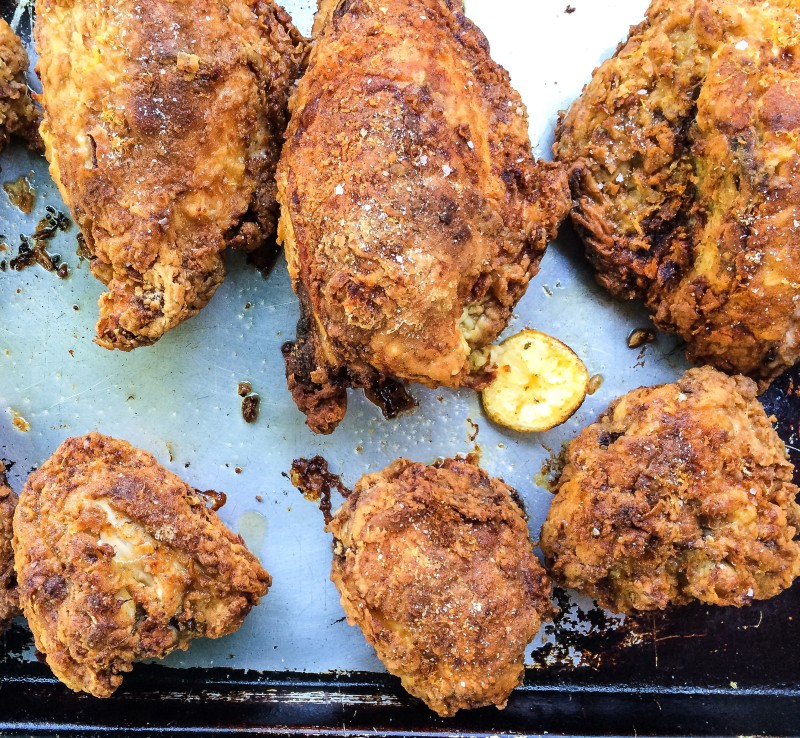 Congratulations! All the work is basically done. But before you put your chicken in the oven to finish it off, hold up a minute.

Think of your chicken as a speaker at a podium in a busy room with loads of chatty participants. It needs to be forceful and have something unique to say to really command the attention of the room, right?

Same so for your chicken. You’ve shown it so much love and attention, but is there something else you can do to ensure that your fried chicken really is that scene-stealing stunner you want it to be?

Easy. Whatever flavors you love here, double down as it heads off on the last steps of its journey.

Right before my chicken went in the oven, I added a little lemon zest, a bit more garlic powder and some Maldon sea salt. And just a touch more smoked paprika.

End result? The chicken was plump and flavorful in its own right, and the crisp lacquered shell was just as flavorful with the bit of lemon cutting the richness of the skin.

7. Find as many people as you can to share it — and for heaven’s sake, let it breathe. 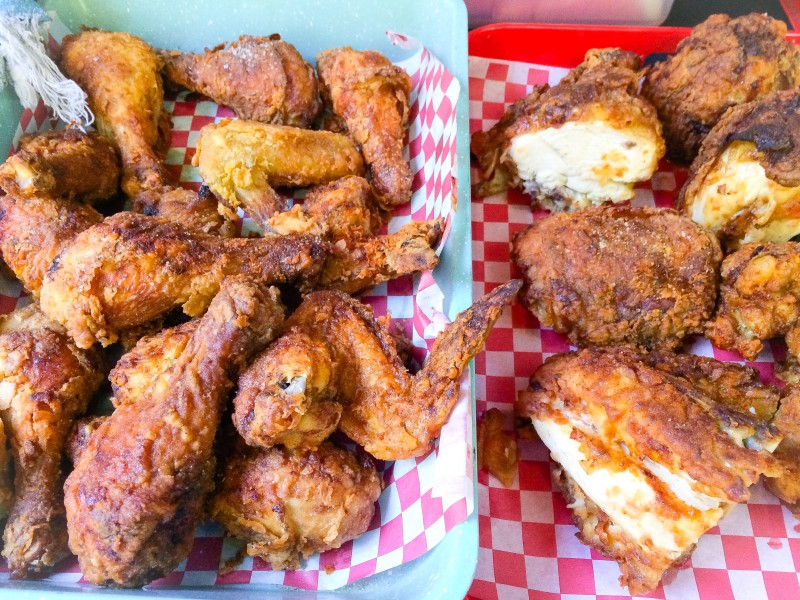 Warm fried chicken will steam if you cover it with foil or a lid, and your crust could go kerplouey. Don’t cover it! Nestle it on wax paper or cute kitchen linens, and get it out there.

It doesn’t need to be piping hot; even room temperature fried chicken, when given such a loving departure, will please even the most discerning palates. 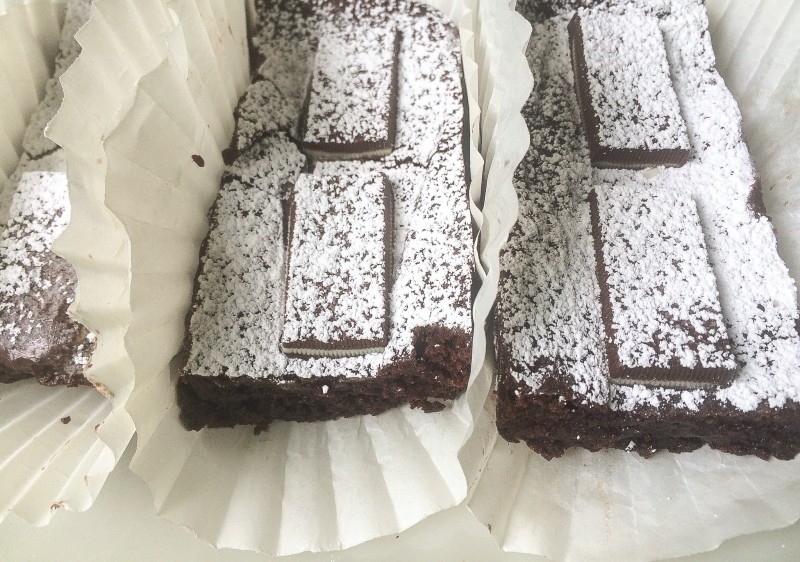 And so now dear readers, we’re taking our last two brownies and we’re headed to the airport.

Charade games are on-going,  jigsaw puzzles are always at the ready, but wi-fi is sketchy. I will post when feasible.

In the meantime, may fear of frying never hold you back from the fried chicken you were always meant to eat.