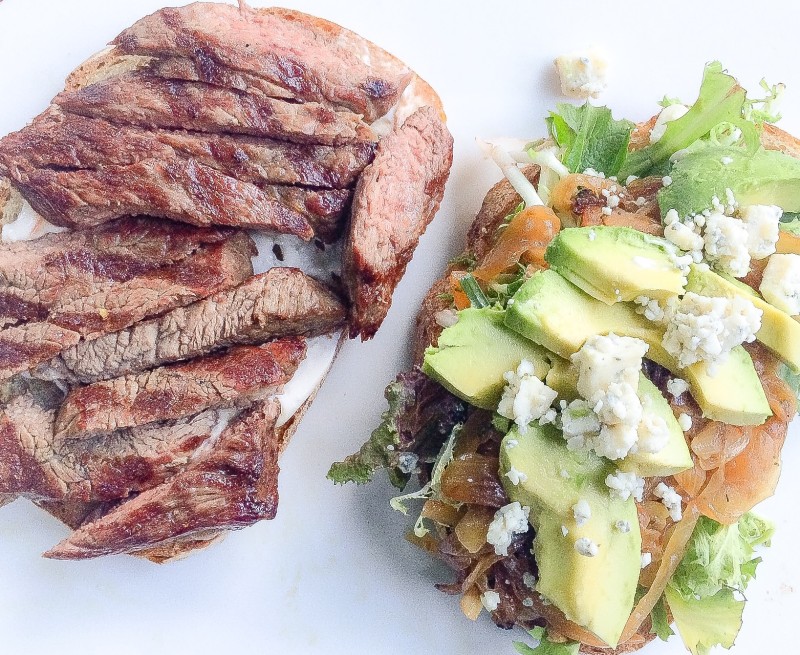 Making a great sandwich is like channeling a stellar casting agent — find the right players for the role, make sure that the chemistry is there, and boom! Sit back and watch the magic unfold.

I’ve been thinking about steak sandwiches every since I was in Seattle last weekend, and I knew that I wanted a little meaty loving at home.

Time to pull together an ensemble cast. I knew just where to begin. 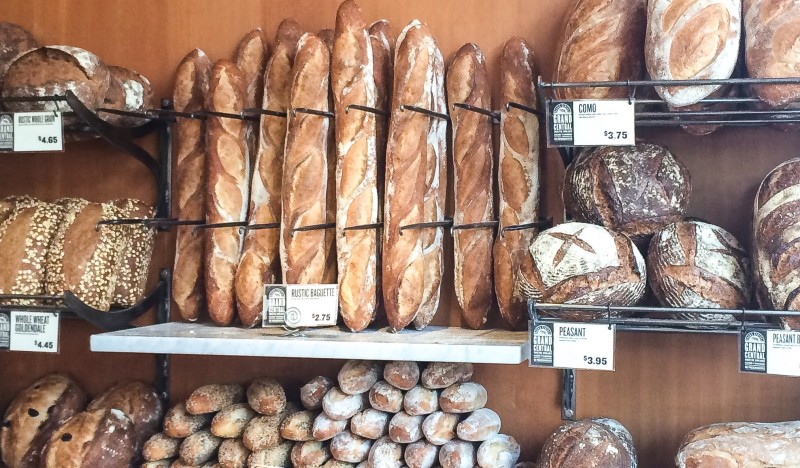 Grand Central Bakery is one of my favorite bread spots in town. I love all their loaves: baguettes, Campagnolo, Peasant, Sour Rye, Whole Wheat Goldendale, and the justifiably popular Como.

Did you know that Saveur Magazine chose 20 Great American Bread Bakeries and Portland bakeries nabbed 2 of the coveted spots on this list?

Both Grand Central (with spots in both Portland and Seattle) and Ken’s Artisan Bakery were singled out for their excellence. Boy are we lucky.

For the sandwich I had in mind, I wanted a bread that would accommodate all my fillings and be a soft landing for all those steak juices. Having raced through all of the possibilities in my mind, there really only felt like one right answer.

Look at that wonderfully crispy exterior. 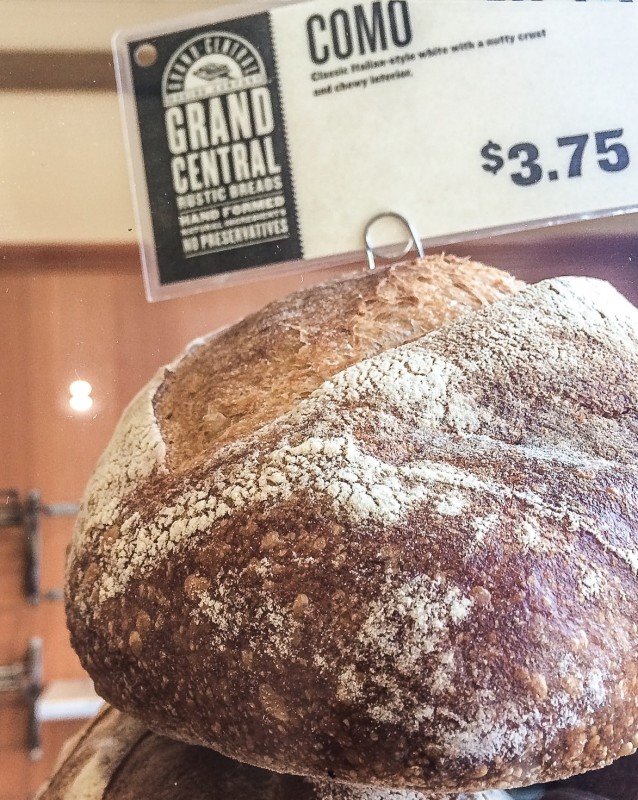 To me the Como Loaf is one of the city’s best all-around loaves of bread. I appreciate that GCB will slice it for you; there’s no chance I could get such perfectly even slices at home.

That is one gorgeous loaf. 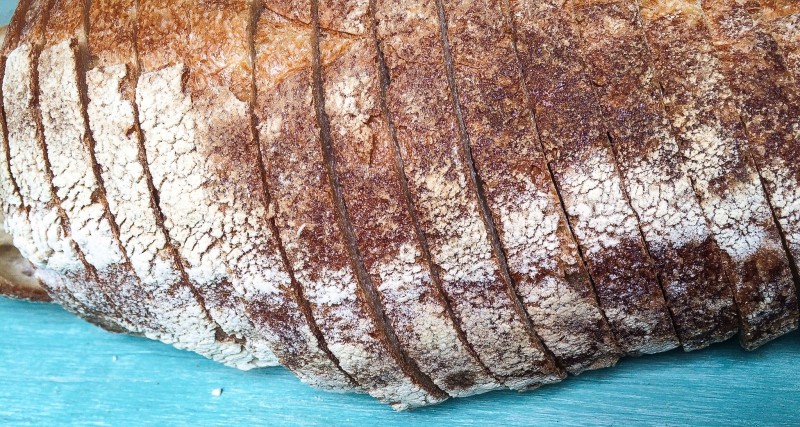 Next up, New Seasons. I bought some ruby red grass-fed Denver steaks; I tasted them once in a demo and I loved how tender and flavorful they were (and without a lot of fat).  They’re a lot like Flat-irons– all that surface area to caramelize and delightful when cut on the bias.

I find that between six to eight ounces of raw steak is plenty for a generous sandwich, especially if there is little or no fat to trim and it’s without a weighty bone.

Denver, I’m sure you are pretty pleased with yourself to have such a fine cut of beef named after you.

I know I would be. 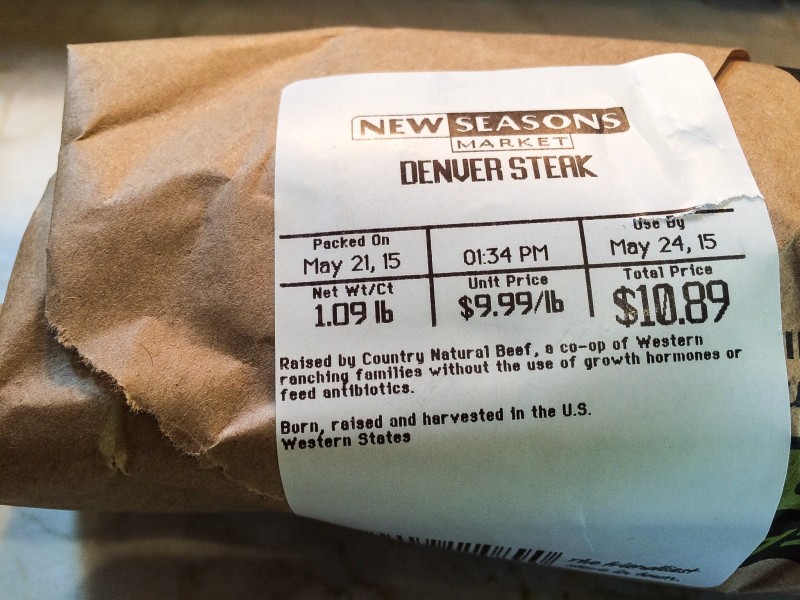 Also at New Seasons I bought some crumbled aged blue cheese, a handful of mixed greens and some Walla Walla onions. These onions smelled so sweet and fresh — no mustiness or pungency here. 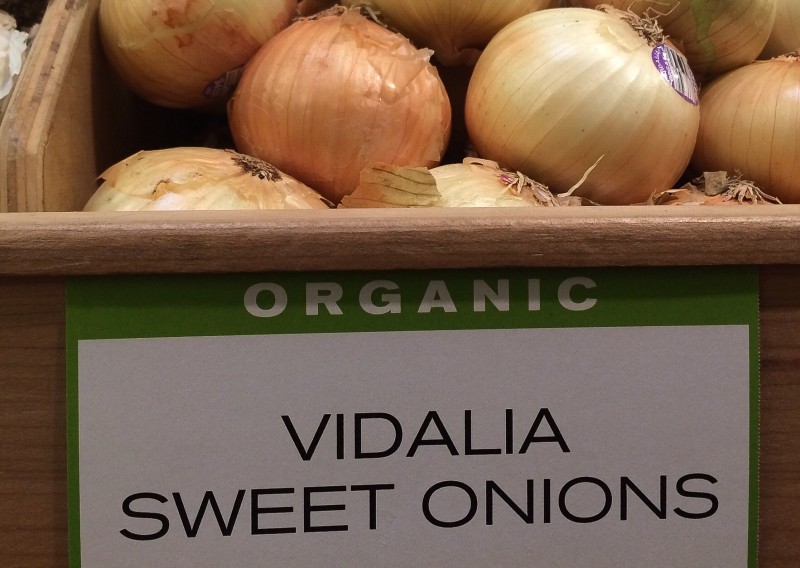 Back at home with my provisions in hand, there was not too much more to be done. I was so happy that I still had that ripe avocado at the ready.

I let the meat sit on the counter with a little Maldon sea salt; the addition of a little melted butter was drizzled on later, moments before they went on the hot grill. 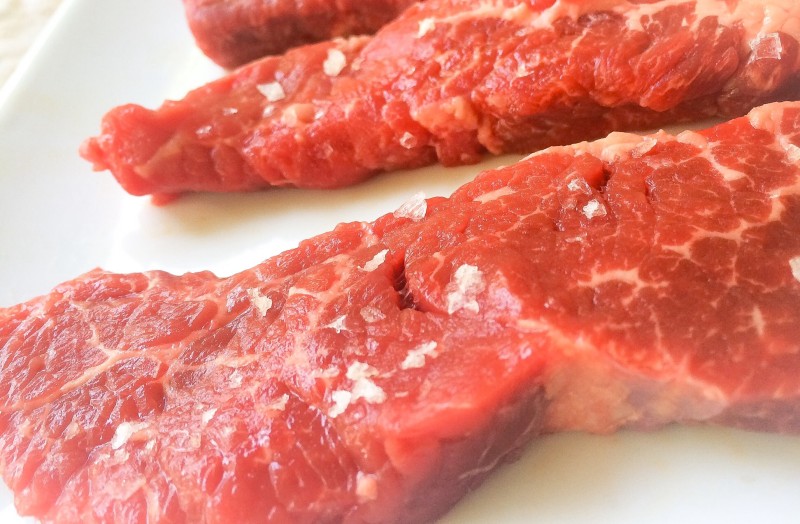 While the counter took the chill off the steak, I cut the onions into crescents and then caramelized them. No big secret here; just toss some butter in a skillet (I used my big cast-iron) and cook the onions over a medium high heat, de-glazing with wine, stock or water if your pan gets too hot and you want to avoid scorching. Be sure you season them with salt and pepper.

(An aside here; sometimes I allow my onions to caramelize further until they are a deep, tarnished brown. In this instance, however, I didn’t want that depth of flavor here as I didn’t want the onions to overwhelm the steak. However, had I wanted the onions in, say, a potato gratin, I would have probably taken them to the hilt of caramelized goodness. Just saying.)

I finished off my blond beauties with chopped rosemary from my garden. They smelled amazing. 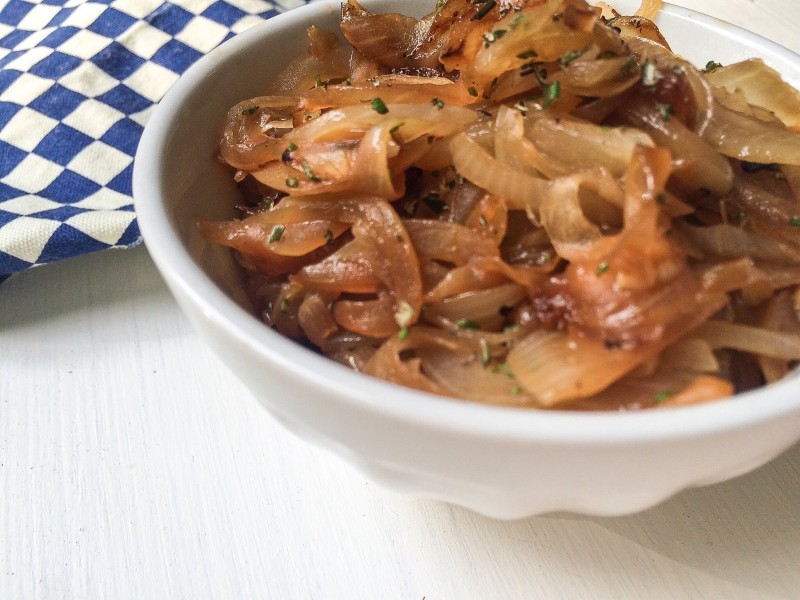 Time to fire up the grill.

I know charcoal imparts a great flavor to meat, but ever since I got a gas grill, I’ve found that it’s so much more likely that I will cook outside. The convenience of having a blisteringly hot grill ready to go in minutes is too good to pass up. 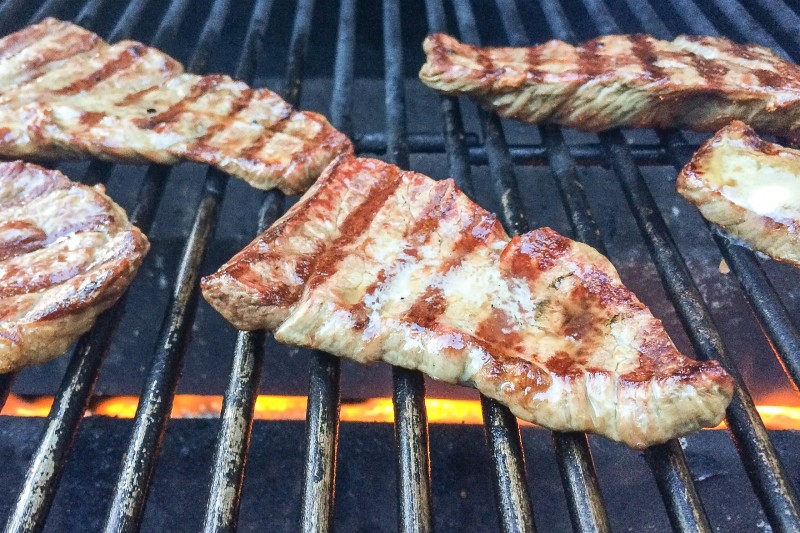 The steaks were so thin that they only took a few minutes to cook, and I let them sit and rest up for a few. It took great self-control on the part of my dog not to just swoop in and grab them off the counter, especially with the butter oozing on top. 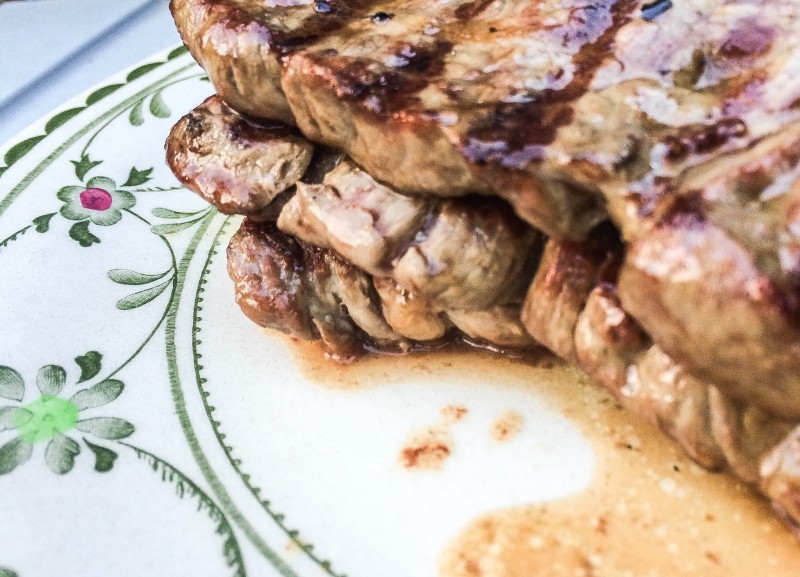 A quick toast of the bread and I was ready to pull the cast together.

Not too much toasting, mind you — just enough to give the sandwich the requisite backbone to hold the crew together, but not so much that the juices couldn’t find a place to go.

The bitter frisee and greens I added to it were a wonderful counterpoint to the sweet onions and tang of blue cheese.

And let’s not forget the mayo — not is not the time to get stingy with amounts. For heaven’s sake — you are eating a steak sandwich with avocado and blue cheese and buttered onions and now you’re going to get concerned with the fat in the mayo? Please.

Bonus points for anyone using homemade mayo or that delicious Japanese Kewpie brand (as I was here).

Behold the Dagwood. It was so beautiful outside that I had to take it out there. 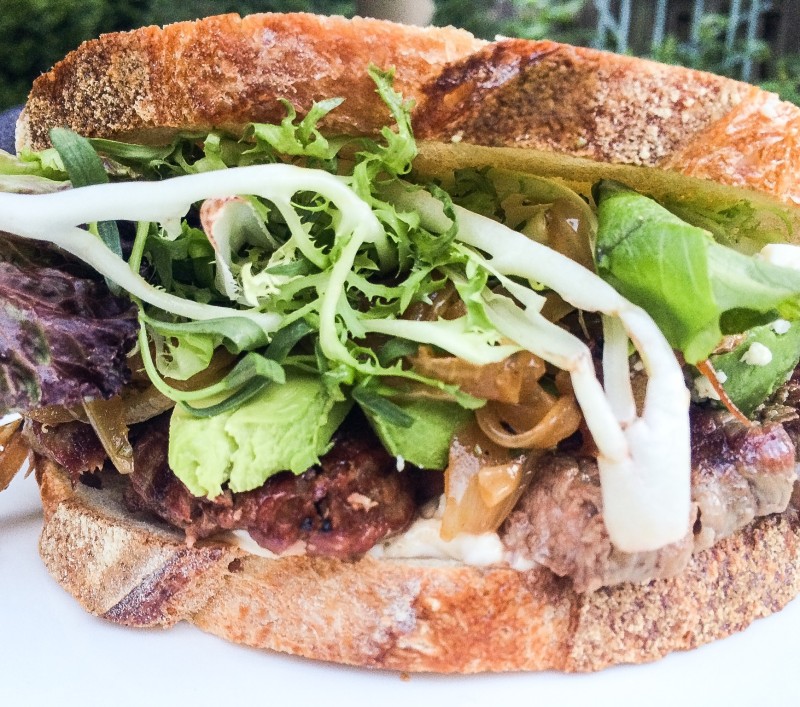 This sandwich, a generous handful of Fritos and a glass of Pinot, and I was good to go. Showtime, people.

Next time I may even pull the same cast of characters together and use it as a filling for a wrap sandwich. Wouldn’t that just be the ticket for a picnic in the park?

Summer, I’m ready for you.

« ROAD TRIP: SEVEN SEATTLE PLACES EVERY FOODIE MUST TRY
PASTAWORKS AND A TALE OF TWO PASTAS »