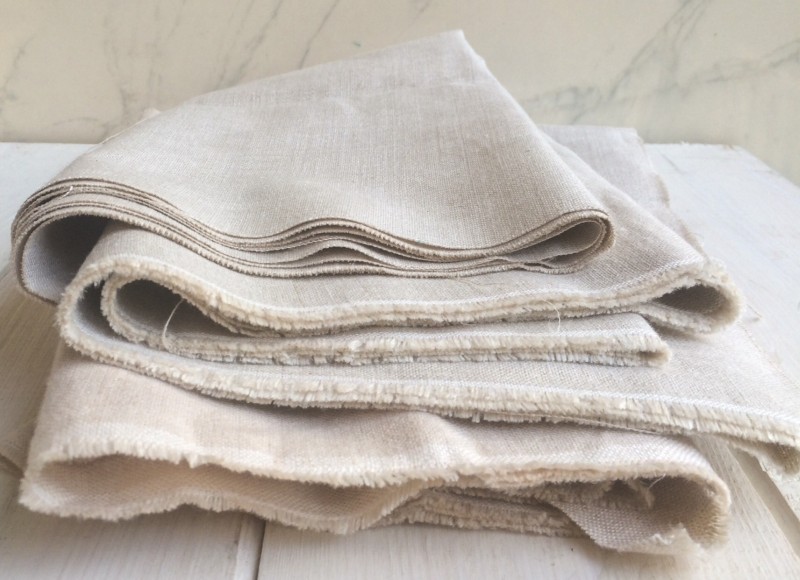 I’m obsessed with linen. There, I’ve said it.

I especially love it in white,  cream, ecru, dove gray, caramel — and oatmeal. Oatmeal linen is the best– it looks sort of French with equal parts rustic and elegant. I love the feel of it, the way it catches the light, and if there was a snowball chance in hell the color looked good on me, I’d probably wear it all the time. It looks amazing with so many colors – aqua, cobalt, pumpkin, fuchsia, sage, lavender, navy, white, even black – but alas I look like death warmed over in it.

That fact, however, didn’t stop me from buying the couch I fell in love with at Restoration Hardware. It is covered in Belgian oatmeal linen, took two months to arrive, and sat for one month in my living room before I felt worthy of a long sit. It’s what I like to think of as a grown-up couch; something you buy with intention, see as an heirloom (unless kids destroy it inadvertently with a Sharpie), and can have your in-laws sit on when they visit. (Darn it! I think I see a foot print on it! I am going to have kick some major a–.)

I’ve learned to love a color that doesn’t love me back. I’ve incorporated oatmeal linen in my life in small ways– a grocery tote, a couch, a tablecloth, the odd item here or there. And yet lately I’ve wanted some more fabric on hand to make a stack of napkins, to create some bulk bags for dream pantry, or who knows? Maybe if I had enough I’d line the trunk of my car in it. Or maybe a new dog cover for Bailey’s bed?

Okay, so I hit the Goodwill bins this week. I was drawn to a bin of clothes, but I didn’t have the energy to pick through it all, and I told myself to just pick one handful up, see if something spoke to me. Did it ever.

There, sitting neatly and expectantly amongst random, slightly dingy pajamas, spare socks and XL t-shirts was a pile of pristine oatmeal linen– roughly 5 yards of it, gently folded up, and very close in color and texture to that of my RH couch. It’s not as wide as fabric cut in a store; the width ranges from almost two feet for one piece, half that for the other, but I’m not complaining. (It’s not like I need it to cover a couch or anything.)

I love it when I find exactly what I am wishing for — thank you, powers that be.

(Next time, though, perhaps I will wish for something a little more substantial than fabric. If anyone is listening,  how about a magical 15 pound weight loss or my very own Airstream? Just saying.)