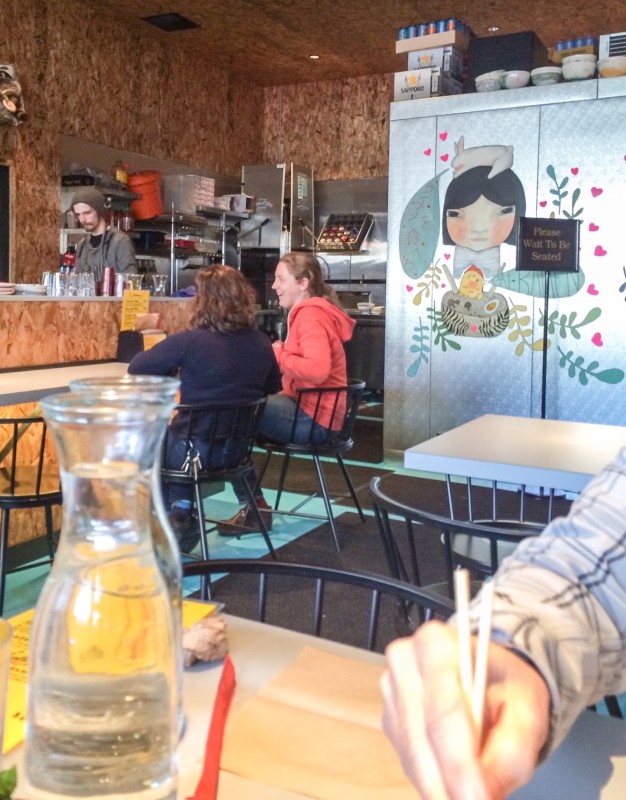 When you are fighting off a cold that feels like you are being marauded by evil inhabitants, what do you do? I fight fire with soup, the hot stock acting as a superhero, warming chilled bones and seemingly fighting off infection with every slurp.

And, apparently, I also fight fire with tater tots. Allow me to explain.

I ended up at Boxer Ramen with some pals the other day. I felt like I had been hit by a truck but I missed seeing my pals and allowed myself to be lured out. I had yet to try Boxer’s outpost downtown, but when we drove by Alberta and saw their second shop had newly opened up, I knew ramen was the answer to my congested woes.

Boxer is situated on that magical block of Alberta and 20th in which Bollywood Theater, Salt and Straw, Bunk and Little Big Burger have put down roots (those are my kind of neighbors). Blink and you’ll miss the entrance (a small wordless sign right next to Little Big is the only clue as to its presence), but that would be a mistake, because all kinds of goodness resides within.

The place still looks like it’s in the process of being built (or is that intentional and I am just too square to get it?). Either way, it doesn’t matter as you are here for the food. The menu is abbreviated but plenty of tastiness tantalizes: a choice of four ramen soups, and three sides  (greens, gyoza, and tater tots).

Do not adjust your screens — yes, I said tater tots. But be patient, Grasshopper – I will get to that in good time.

First off, let’s start with the ramen. Our group sampled three of the four, and each had its own myriad of charms. The Tonokotsu Shio had an incredibly meaty tasting pork broth along with sliced pork belly and a soft poached egg and a lovely tangle of uber-fresh ramen. The Spicy Red Miso was notable for its wollop of heat (the perfect thing to punch a hole through a cold congestion) and miso underlyings along with the same savory soup ingredients. Behold a bowl of the former with a garlic-sesame emulsion on top (by then the egg was just a memory). 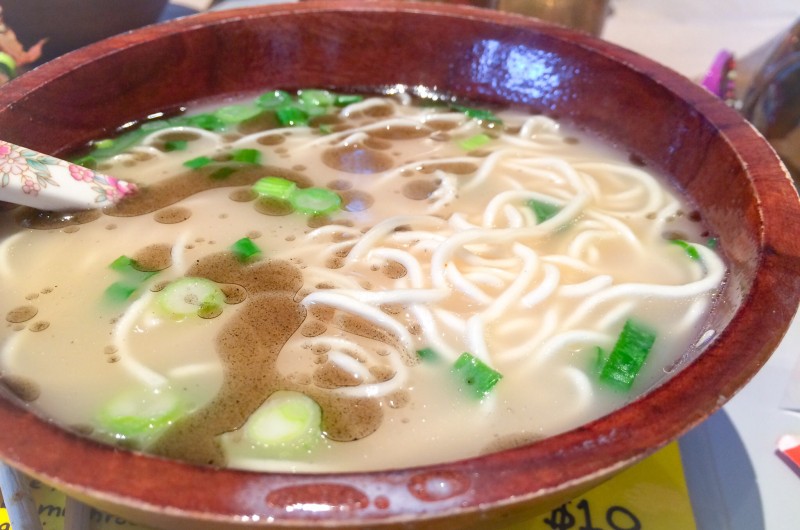 My favorite may have been the Shiitake-Shoyu, however –an intensely ‘shroomy broth that is impossible but for professionals to get just right. Even my friend who lived for some time in Japan marveled at its perfection, and after I tried it, I almost had to sit on my hands so as not to snatch her bowl.

Each bowl of ramen we ordered sported a soft poached egg which was the picture of ovoid perfection. Could the person responsible for said eggs stop by my house on the weekends and throw a couple of these my way? (Only if it’s not too much trouble).

And now on to two of the three sides offered (gyoza, don’t sulk, I promise I will try you next time). First up, something billed as Greens + Sesame. Sure, be like that, you understated menu minx. 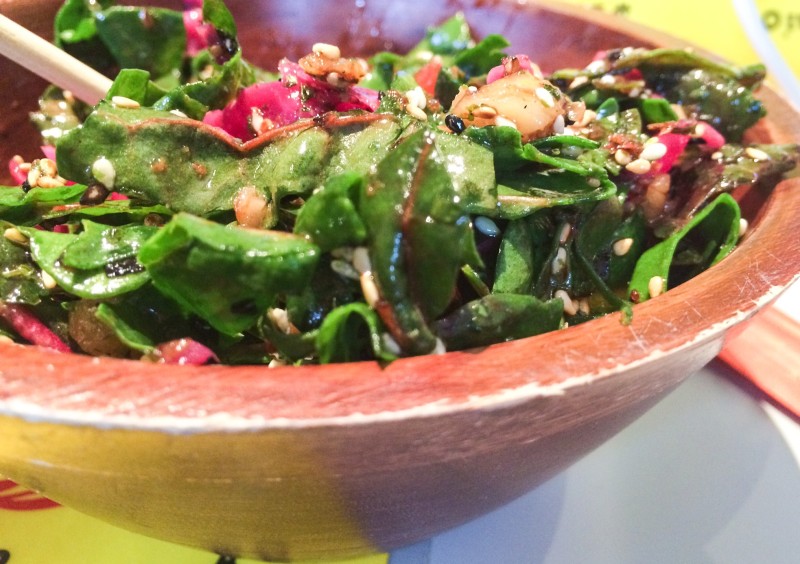 This bowl is a wonder. Rainbow chard and shiitake mushrooms get frisky with pickled cabbage and walnuts in a beguiling sesame and ginger-laced dressing. I could have eaten a trough of it, and would have had they been kind enough to bring it to me. It was the bomb.

And now on to the tater tots (be honest, that’s why you’re still reading this, right?).

Okay, then. We were all surprised to see it on the menu (ramen and tater tots in the same menu?) but I should not have been surprised. These little deep fried nuggets of joy are proving to be quite the ambassadors in the culinary world, showing up in places you wouldn’t expect with ingredients far outside the original home (I can’t wait to try the version at Bunk that puts a nacho spin on it).

Feast your eyes on Boxer’s version. 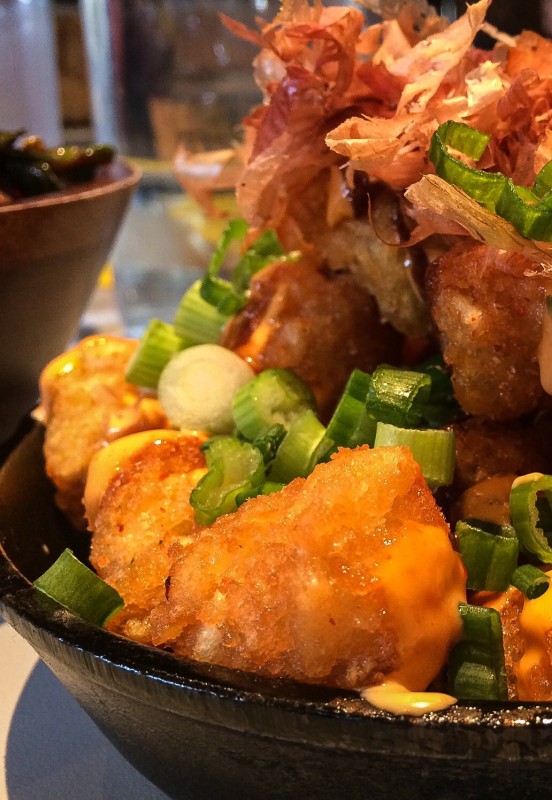 Here they arrive piping hot with the shatteringly crispy exterior yielding to a soft pillow of potato inside. What makes them so extraordinary, however, is the treatment. Reads the menu : “Tater tots, creamy spicy sauce, tonkatsu sauce, bonito, togarashi, and nori.”

Okay, that’s a lot to wrap my mind around, and I don’t even know what all of that is, but it was crazy good. My Japan- traveled friend said the brown sauce was the tonkatsu sauce and it is traditionally served with thin fried pork cutlets. Makes sense. I swear the spicy sauce tasted like that amazing Japanese Kewpie mayonnaise thinned out and heated up with a little Sriracha (could be off base but it had that kind of richness and taste). Green onions added a fun allium tang and the bonito flakes atop gave even more depths of flavor.

It was a tsunami of unami.

I kept having one more, then one more, then one more– all the while I kept telling myself to slow down, wait for others, hold off, show restraint, try to follow the conversation at the table, but no. I was like a puppy presented with a pile of beef sliders and asked to eat sensibly. As if that’s going to happen.

And guess what? I don’t know if it was the ramen, the taters or the boost of friendship, but I did feel better afterwards. My excesses forced me into a premature but sustaining stint on the couch, and this did wonders.

Go to Boxer. And try to keep a straight face when you pretend to order those tater tots as an afterthought to the already ordered ramen — I’m not buying that tomfoolery for one minute.