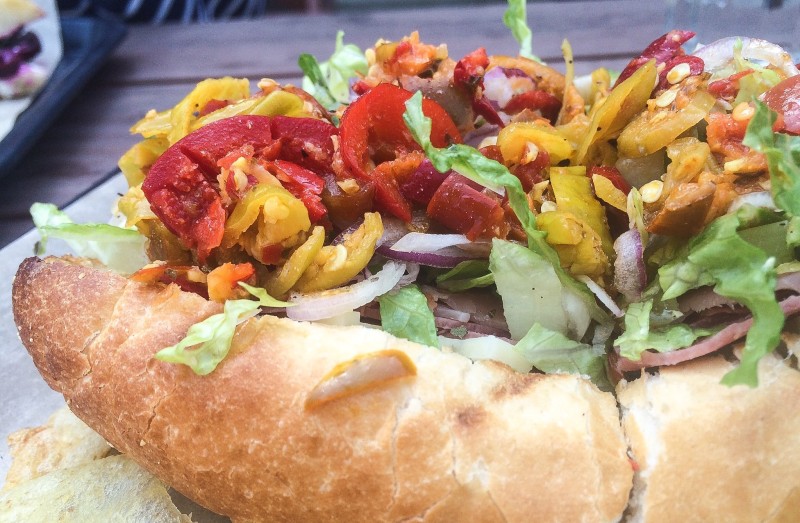 About two years ago a casual question came up in a conversation with two girlfriends; when I answered in the negative, I was taken aback by how shocked and hell, even dismayed, they seemed by my answer.

They ran the question by a second time, this one with slightly different wording, as if I might have misunderstood the question on the first round.

“You mean you have never been to Bunk Sandwiches — none of them? You mean you haven’t eaten there and you’ve just done take-out, right?” She was trying to understand how this might be.

I suddenly felt like Bill Clinton at a post-Monica press conference. I needed them to hear the clarity of my assertion and my memory. “No. I have never had snacks with that eatery.”

It’s as if there had to be some really good reason I hadn’t been to Bunk yet, like maybe Tommy Habetz (the owner) had broken my heart in college by cheating on me with my best friend and I had made it my personal mission to avoid anything Tommy-touched from that point onward.

Or maybe my grudge went back further — a young Mario Batali (Tommy’s former boss in NYC) had insulted my mother’s lasagna at a block party and the taint of this connection was too much to bear even today, years later.

Surely there had to be some really good reason that I hadn’t been to what’s been talked about for years as one of the best sandwich places in the country — right here in Portland.

My feeble excuses fell on deaf ears. “I guess I just haven’t gotten around it to it”, I added lamely. “Aren’t there always lines?”

This oversight could not stand uncorrected, they asserted, and so we found ourselves just a few days later at the then-newer Bunk Bar on Water Ave. Seeing that it had been around for a while, the lines were respectable but not daunting. “Just you wait,” they chirped in happy anticipation.

I will never forget the first time. I ordered a Roasted Poblano Torta— a flat pressed sandwich with pinto beans, guacamole, roasted poblanos and queso cheese. It was magic — like a burrito that had been kissed by the Sandwich King.

Now granted, it may be Coyote Ugly but give it a chance — it’s a stunner of smokiness, crunch, and ooze. 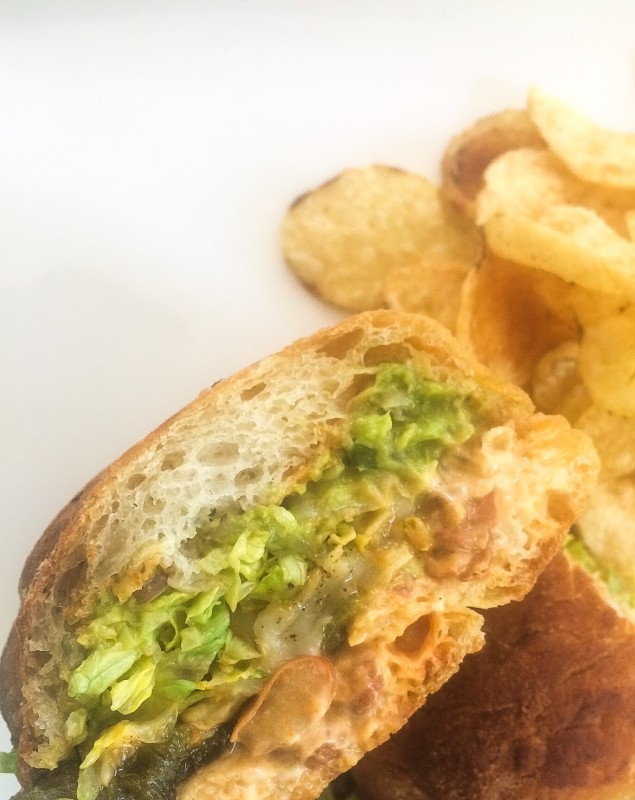 There are now several Bunk spots in which to indulge: the original on Morrison, and then ones on Water, downtown (on 6th) and Alberta, with additional outposts at the Wonder Ballroom on Russell and now at the Moda Center. I understand there is also a roving food truck (check Bunk website for details).

I returned just this week to the Alberta location with those same two girlfriends and we were able to snag one of the picnic tables in the back on yet another unusually warm afternoon. This was not a casual lunch — this was a reminder that they had taken this wide-eyed nube and shown her the world between two slices.

Ladies, think of our lunch as an edible thank you note for that. 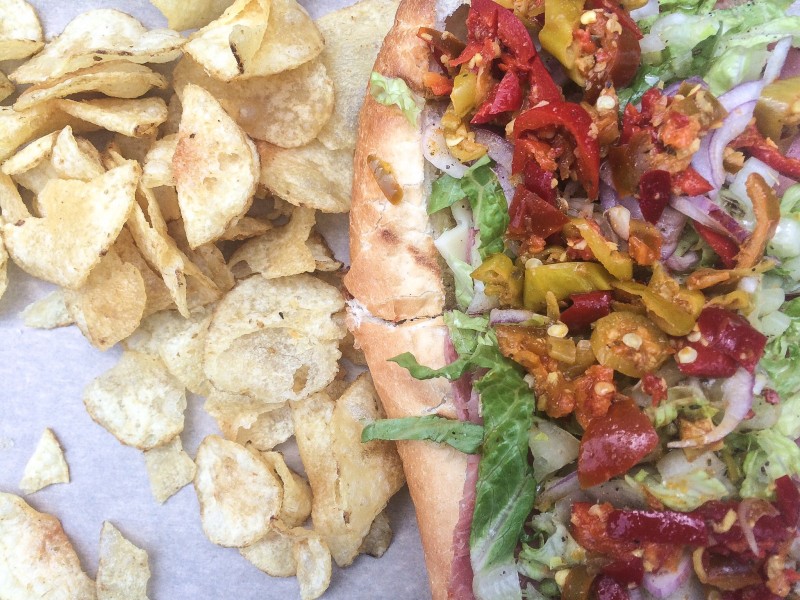 I ordered the one sandwich that never fails to please and listed succintly on the menu: Italian Cured Meats.

A Fleur de Lis roll is lightly toasted and split open wide to hold a bevy of Italian beauties (including soppresata and provolone) and a roughly chopped romaine salad dressed generously with an herby vinaigrette is piled high on top. Slivered red onion has been invited in and then a decadent amount of house-pickled yellow and red peppers becomes the crowning glory.

Every bite is zesty, spicy, crunchy; it’s like one of the best chopped salads you can imagine on a superlatively crunchy yet airy roll. I never tire of it.

Next up, a special that day. 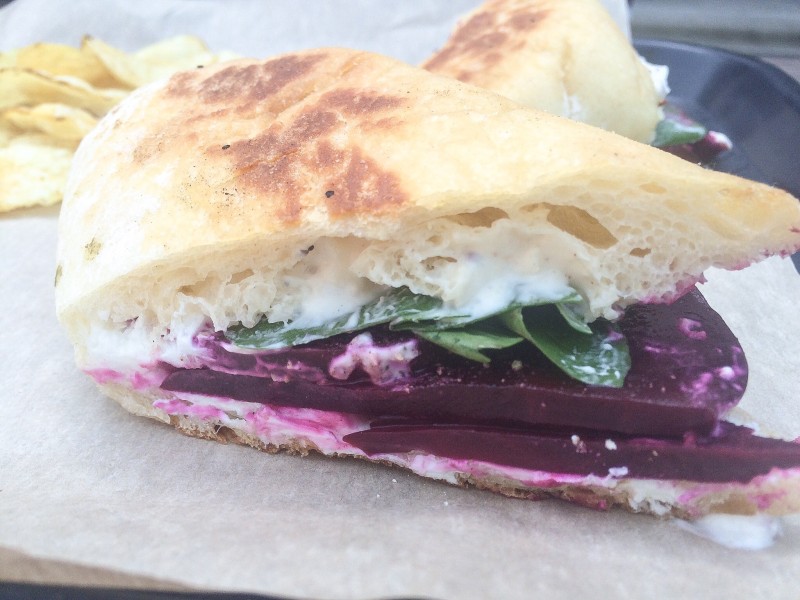 This one sported pickled beets, chevre, a good handful of crisp watercress (something sadly we see too rarely in the sandwich world) and a horseradish crema of sorts. It’s so hard to compare this side by side to the Italian Cured Meats one as that delivers such a roundhouse of flavor, but as a stand-alone, this one clearly has its own charms. I loved how the sweet tang of the beets plays off  the creaminess of the goat cheese, the peppery greens demand a nod of recognition and then the creeps-up-on-you burn of horseradish finishes it off.

It’s like everything I hope a tea sandwich will be — but never is.

Last up, my other pal ordered a bold choice: the Roasted Chicken Salad. How would Bunk do at salads when they’ve so clearly made their name in the sandwich arena?

I have ordered the same filling as a sandwich a good three or four times, and while not a home run, it’s a respectable base hit. How far off track will you veer if you have bacon and avocado there to keep you company? 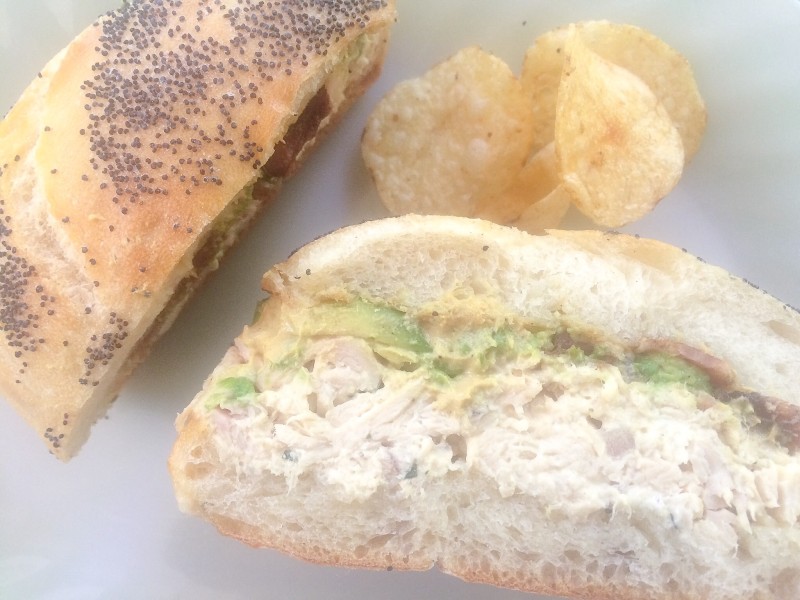 Flash forward to our lunch. It was her meal to be had, and I was curious as to how the filling would hold up in this incarnation.

Lisa, I stand corrected. You are right — it does works even better as a salad. 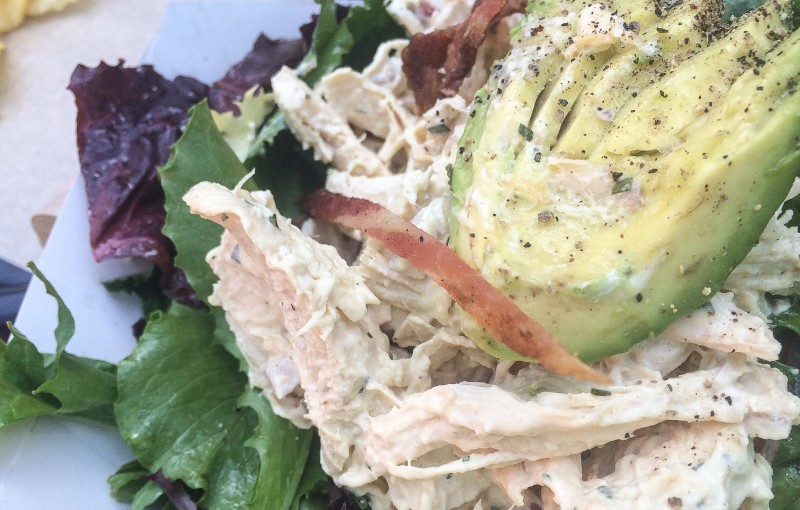 Like a zaftig girl, there’s just more here to love. A lush carpet of greens becomes the backdrop for a sizable mound of delicately flavored roasted chicken salad (a touch of Dijon and proper salting ensures interest level remained high). Added to this were a few long thin strips of bacon and a generous amount of seasoned and lusciously ripe avocado.

Eat it as is, or mix it all together. It’s better than the sandwich because the end result with the dressed greens makes it more interesting; in the sandwich, all that poppy roll competes for attention, and I hate to break it to you, Poppy, but I’m just not that into you. You’re okay, I just want to play the field — is that alright?

My two cents: head over to Bunk with pals, order your own sandwich (I can’t recommend the first two sandwiches enough), and then inhale without coming up for air. You can watch as your friend tries to tackle this enormous salad, and like a vulture sensing weakness and fatigue, you can then swoop in and finish off much of this salad as your waning companion starts to wag the flag of surrender.

It’s almost too much for one person to tackle in its entirety — and that’s where you come in and really clean up (I’m always happy to jump in to help a friend in need).

NEXT up for me at Bunk: trying one of their much lauded Pork Belly Cubano sandwiches, the Oregon Albacore Tuna Melt or one of the Shrimp Po’ Boys that occasionally pop up on the specials list.

My only caveat; the potato salad hit a rare discordant tone; it was overpriced at $4 for just a small container and it was far too mustard-y and yet short on the promised bacon to merit a return order. (Overpriced, and not enough of it?  I know — a Woody Allen-ism if there ever was one.) 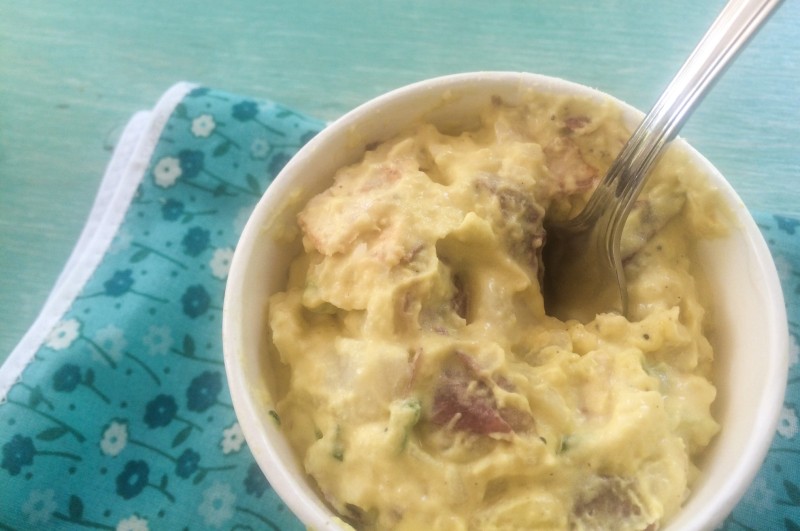 Far better choice is to stick with the excellent Kettle Chips that accompany every sandwich order at no extra cost. They’re always good and taste better than almost any homemade chip I have ever tried.

Ladies, I may be late to the table on Bunk, but I like to think I am good at making up for lost time. Thanks for the introduction.

And chicken salad, wait for me — and tell your cousin Club I will be looking for him, too. 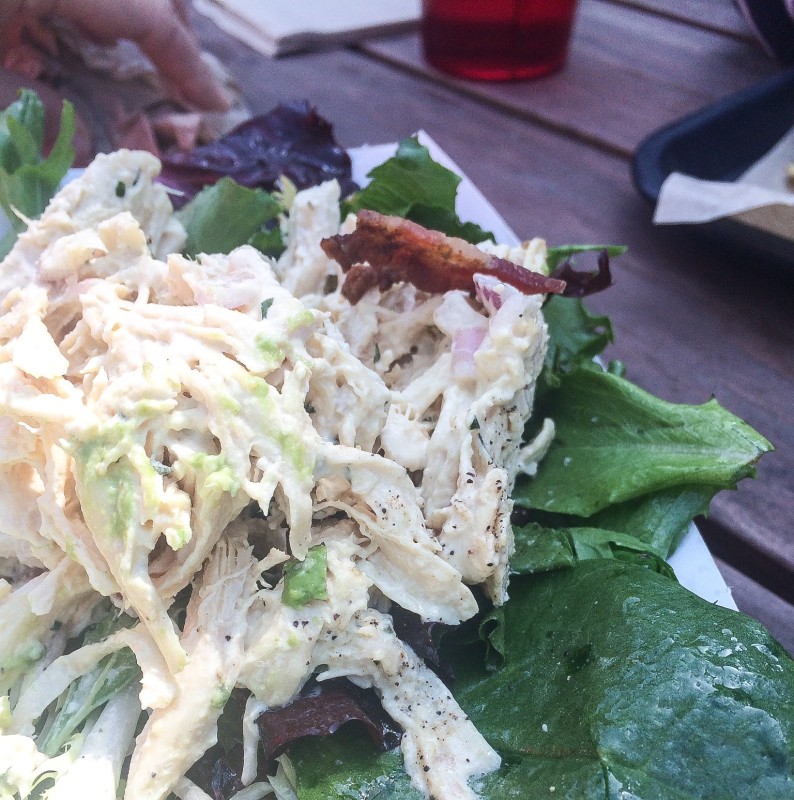