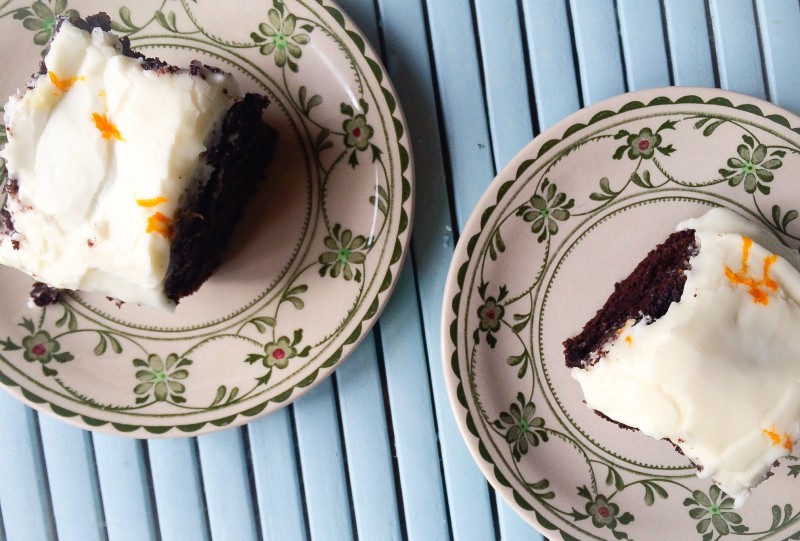 Want to see up close what a slice of $200 cake looks like?

I say that because I am an idiot, and as such, I do dumb things. And it’s a good thing this cake is as memorable and luscious as it is because I think that in the process of sharing it with my Meals on Wheels clients, I did something stupid and I am going to be paying through the nose for it.

You see, in my OCD-driven need to be absolutely everywhere on time, I get a bit frantic sometimes. I don’t always think clearly; all I can think about is getting to where I need to go quickly. Punctuality was something drilled into me at an early age, and to this day I don’t tolerate well any failures on my part.

It’s this kind of rigidity which may explain how I came to be holding a four foot long tray holding 20 slices of cake while a Trimet bus driver got out of his packed bus to explain to me that I had made an illegal lane change and I was going to get an expensive ticket mailed to me. 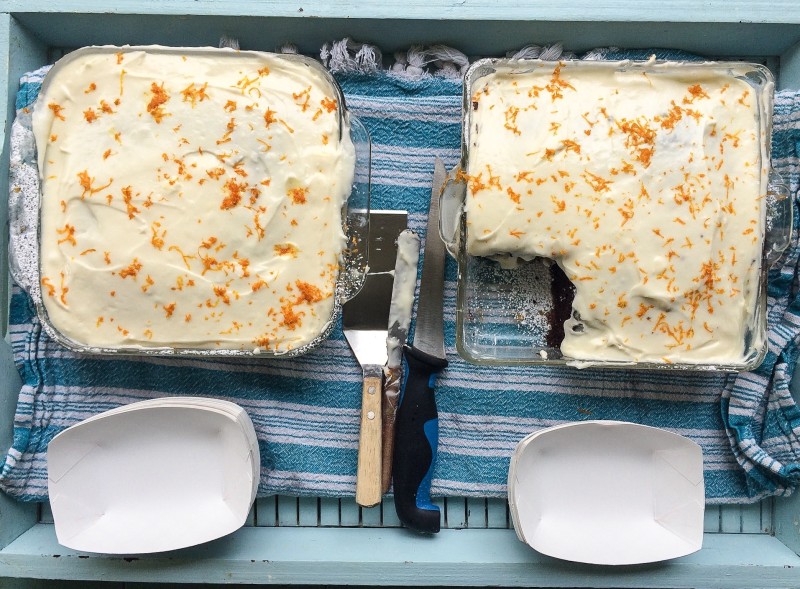 Strangers aboard the bus gaped at me and gave me nasty looks for making them late. Allegedly, you need 100 yards (or was it 1000? I was too rattled to catch the details) clearance in order to pass a bus, and he said the on-board camera captured me passing it without that much room. Who knew? I apologized profusely, told him I didn’t know that law nor did I realize I was cutting it close (I am still getting used to my new big car), and I was rushing to get to my seniors as I was running late. Gobs of excuses.

And because it is Portland, the driver was actually nice about it. He didn’t yell or berate me (as I know they would have done in SF) but instead was kindly, sympathetic even. Unfortunately, though, I got the sense that an expensive ticket was inevitable. Damn.

Why hadn’t I just taken a deep breath and gone around the block (which is what I would have had to do because I couldn’t get over to the right lane in time)? Was it worth the lecture, the expensive ticket, the hassle? Why can’t I just be normal and take such small delays with a grain of salt?

Joke is I got into my MOW Center and they were running late so I had 20 minutes to reflect on my need for punctuality, how inane it can be, and if I am not careful, could get me in trouble. I didn’t feel like there was anything unsafe about my lane change (I had signaled and glided gracefully into the lane) but what if next time my hurrying means I don’t see a pedestrian about to cross, or I misjudge how safe it is to get somewhere quickly?

I allowed myself a few minutes to feel sulky and then told myself to get over it. I had seniors waiting for me, and they didn’t need my grumpiness as they had their own problems. I decided right then and there that I was going to try to do a better job at slowing down in general. Enjoy tiny moments when they came my way instead of missing them in my rush for perfection and timeliness.

So I took my my expensive little Chocolate Buttermilk Squares with Tangerine Cream Cheese Frosting and started driving around town. I noticed things I didn’t notice last week. 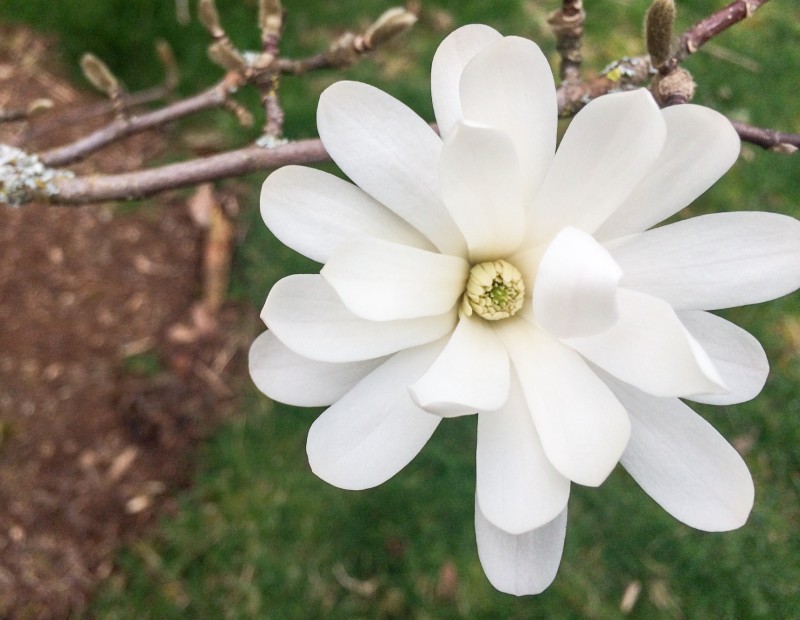 I delivered thick wedges of this cake to my home-bound buddies and tried to do a better job at listening when I arrived at their doorsteps.

C. brightened visibly when I showed up, and noting the little Chihuahua nestled up to her, I told her about how a Beagle had won the Westminster Dog Show. She told me she can’t watch television because her eyesight is so bad, but she seemed to love hearing about the specifics of the show, petting her little pal all the while.

I talked to the caregiver of B. who told me that B.’s skin graft is going to take a year to fully heal. He reminded me to get a requested meatball recipe to her. He said the cake was going to make her day — and his.

My Cuban senior told me how much pleasure she gets from dusting and keeping her house fastidious (at least that’s what I think she told me as she speaks in rapid-fire Spanish and I only understand some of what she is saying). She was excited that her son has found a replacement for the Thomas Kinkade plate that broke when scrubbing the walls last week. I tried not to giggle when I finally figured out that the word she kept repeating to me when I shrugged in confusion. Een-TARE-nut. Internet.

I did a pretty good job at feigning ignorance when another senior told me that she is from California and she misses the sunshine. I hear it almost every week, so it may be the 70th time I’ve learned it. I felt a new-found appreciation for all those caregivers who have no choice but to be exposed to such repetitions.

I made a mistake earlier in the day, but that’s okay. If I get that ticket, it will be the first one I have gotten in almost 30 years of driving. Yes, I can be a spazzy driver, hence I am flawed, but who isn’t?

A crappy frantic morning had turned  into a far better afternoon. I’m healthy, I’m loved, and most importantly, I had a piece of my own cake waiting for me at home. Whenever that was. 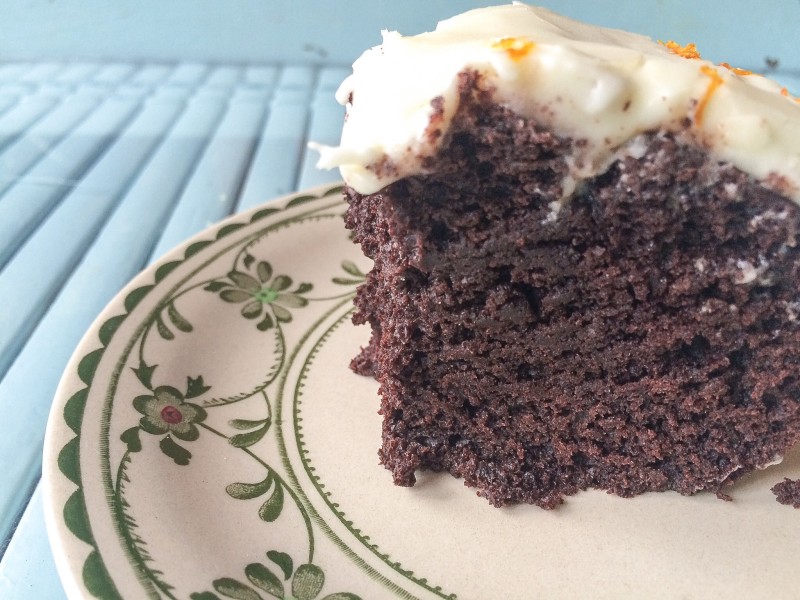 Print
Prep time
15 mins
Cook time
35 mins
Total time
50 mins
This is from a great cookbook called Mom's Big Book of Baking. I like to add a bit more buttermilk and I often swap out the vanilla for orange extract. You can't believe how intensely chocolatey and rich the end result is -- just don't overcook it! The center will still be slightly tender but will continue to firm up out of the oven. This will make a generous amount of tangerine cream cheese frosting but I doubt you'll complain. This makes the cake even richer -- and is the kind of thing that I hope awaits me at the Pearly Gates.
Author: Lauren Chattman
Serves: 9 squares
Ingredients
Instructions
3.2.2925

« IN MY PORTLAND KITCHEN — GRILLED CHICKEN WITH ROSEMARY AND TRUFFLE SALT
WHEAT BERRY SALAD WITH BROCCOLI, POMEGRANATE AND TAHINI DRESSING »