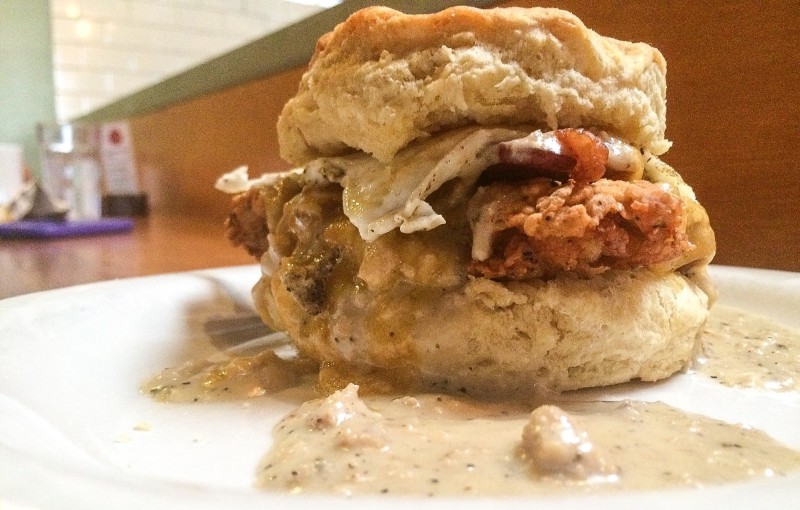 Do you know those nature shows which document a predator as it stalks its prey?

I witnessed it in person. Oliver vs. Reggie Deluxe. Who would come out the victor?

For those not familiar, Oliver is my 13 year old son. He is almost 5 foot 9 and judging by his men’s size 14 feet, he still has a bit growing to go. Suddenly his appetite has skyrocketed; it’s not unusual to see him eat a burger and Caesar salad at 7 p.m. and then catch him shoveling apple and Cheez-its in his piehole an hour later.

It’s like a giant tape worm has taken possession of him, and it’s hard just keeping up with it.

And Reggie Deluxe? This is a formidable concoction coming out of Pine State Biscuits,  and it’s a glutton’s daydream. Take one over-sized biscuit, fill it with an amply sized piece of fried chicken, add bacon, and then more sausage-laced gravy than one person should eat in a year. What makes it Deluxe? Why, an egg over easy, of course. After all, why go half-way when oblivion is just beyond the corner?

So you can see it was a fair fight, and I thought, finally! —  the possibility of a breakfast capable of holding its own with Oliver.

Incompetent Mom that I am, I had failed to take my kids here until just last week; PSB was a pleasure I had enjoyed solo or with girlfriends. Time to rectify the oversight. 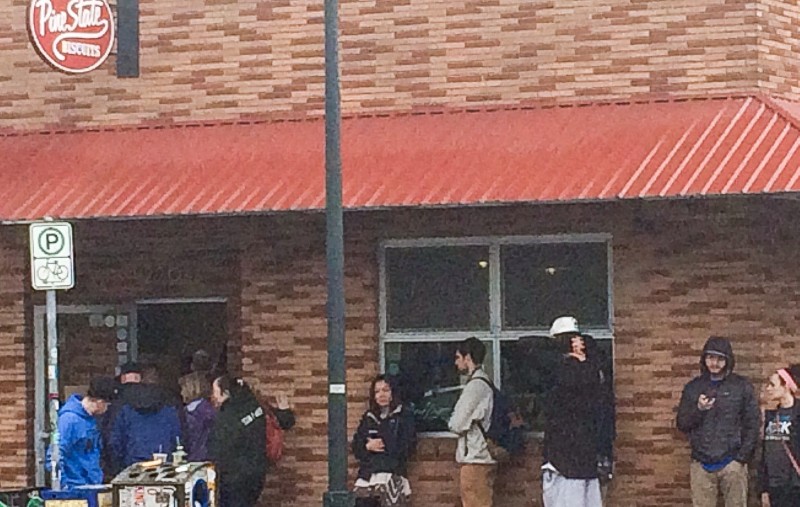 Pine State Biscuits started out at the PSU farmer’s market almost ten years ago and then opened up a shop on Belmont Street. Now they can be found at three locations year-round (NE Alberta, SE Division and NE Schuyler) and seasonally back at the above mentioned farmers market.

No matter where you find them, chances are quite a few people thought about biscuit eating before you did that day, so there’s probably some kind of line waiting for biscuit deliciousness.

Brave the line. Talk to a neighbor, delete all those photos you’ll never look at on your phone, or just contemplate the biscuit’s hold on modern man. Just stay and wait. I promise goodness awaits you. 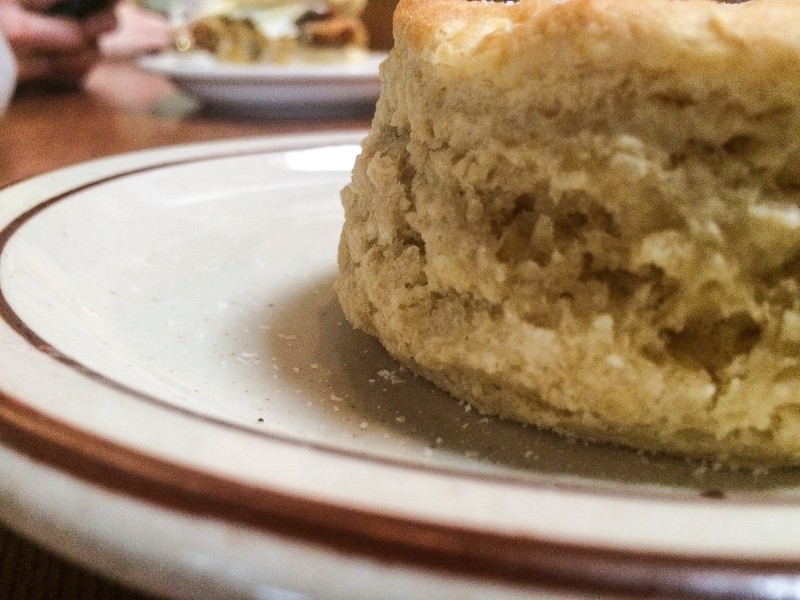 If you are a purist, you could always go for their signature Creamtop Buttermilk Biscuit, straight up. If you feel so inclined, for a nominal surcharge you can add local apple butter, fresh preserves (I love the marionberry), whipped butter and honey, or house pimento cheese spread.

Me, I thought I would mix it up, and so I went for one of the sandwiches, the Chicken Club. In it, that superbly fried chicken was capped off with bacon, tomato, your choice of blue cheese or ranch and a tower of iceberg that pushed the concoction into the ridiculously tall stratosphere. 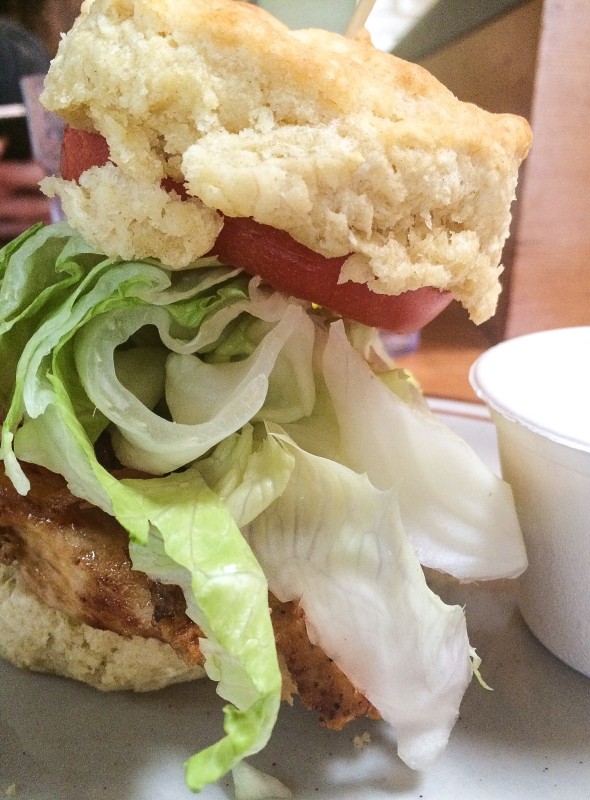 I loved the flavor of the chicken and excellent blue cheese dressing but I was slightly peeved that I had to deconstruct it and eat it with a fork — there was no way that something about six inches high was going straight into my craw as served.

What? I ordered an $8 biscuit sandwich and while delicious, I had to eat it like a salad because it as too big?

Last up, something for the biggest member of our party. Watching him made me realize that taking a teenager to PSB is like bringing a hungry lion into the Serengeti for the first time.

First up for the predator is a quick scan of environment, an assessment of opportunity. In the case of PSB, a visual sweep of the playing field hints at options, and the menu explains what he is seeing. Based on this, the specifics of strike is debated. Sandwich at the counter? Pancakes or shrimp and grits at a table when one opens up?

Next is the commitment to action. A particular prey is chosen to the exclusion of all others. It’s go time.

And then the wait. Hunger increases as anticipation takes hold. Minutes tick by painfully, and the wait feels excruciating. And then, just when he thinks he can’t wait another second…

The moment arrives. Predator takes in prey in all its buttermilky glory, and then he pounces. 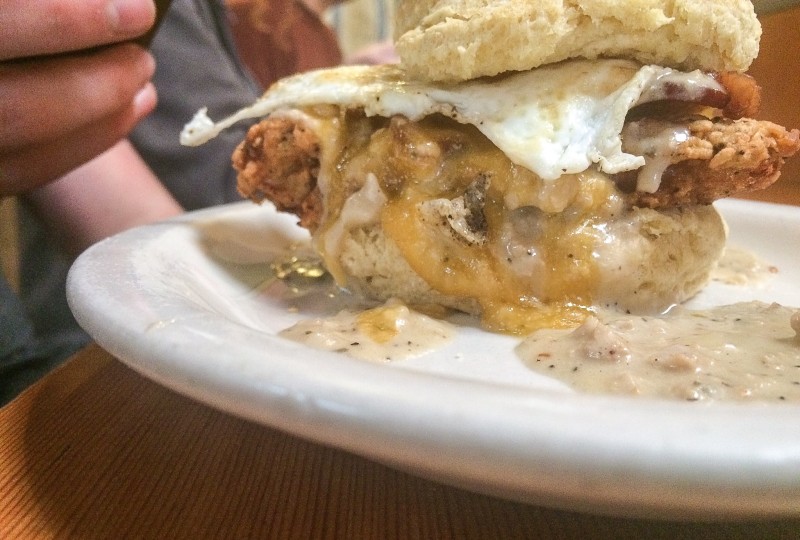 I can only report back on the one bite I was given (alpha lion had first dibs but a threat of head butt enabled me a large mouthful) but it was rock solid —  sublimely seasoned and fried chicken, perfect egg, dynamite bacon, smoky gravy, indulgent biscuit. (I watched the line chefs in action, and I loved that they checked every single piece of fried meat with a meat thermometer — I can’t tell you how irksome it would be to have the cornerstone of this beauty be marred by improper cook times).

As prey was inhaled, there was no talking, just a methodical powering through. And then, with a quick finger swipe to catch last bit of sausage gravy on plate, victory was claimed. In the battle of man-boy vs. biscuit, the former came out ahead. Barely.

Watching him in the minutes afterward, I was reminded of another nature show in which a python ate a goat. I couldn’t stand to watch the televised process but I saw the after, and I swear that my son had the same look of bloated satisfaction as that goat-filled snake.

Did the breakfast do the job of quieting the teenage appetite?

I am happy to say that it did; afterward, O returned to his man/boy cave and it took a good two hours until he re-surfaced, this time in search of two of our favorite shared pastimes: Scrabble playing and Triscuit eating.