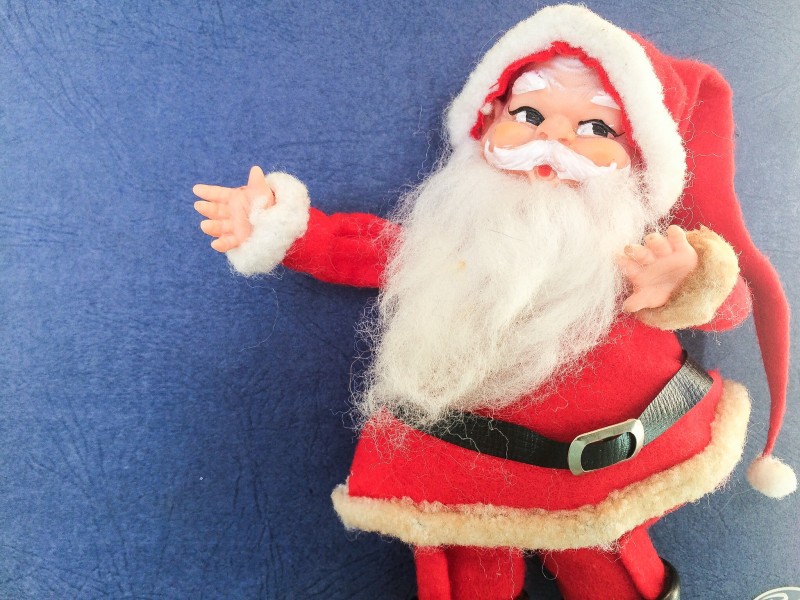 Thrift shopping is like falling in love — if you are trying too hard, maybe it’s not meant to be. But when the stars align, and you are both lucky and attuned to that around you, something beautiful might cross your path. You just have to be ready for it.

Buried at the bottom of a ton of junk at the bins was the above character. Isn’t he merry? He’s about seven inches tall and I am not sure how old he is (he looks 1950’s to me but I could be off) but he is in great condition and will be probably be sitting with my vintage Putz holiday house collection starting next December. I will make him the honorary mayor.

Feeling excited about Santa, I  wondered if more good fortune awaited me. Thirty minutes later I found another fellow in the bin next door, a little bit worse for wear (he was missing a boot) but singularly interesting, and I think, quite a bit older? 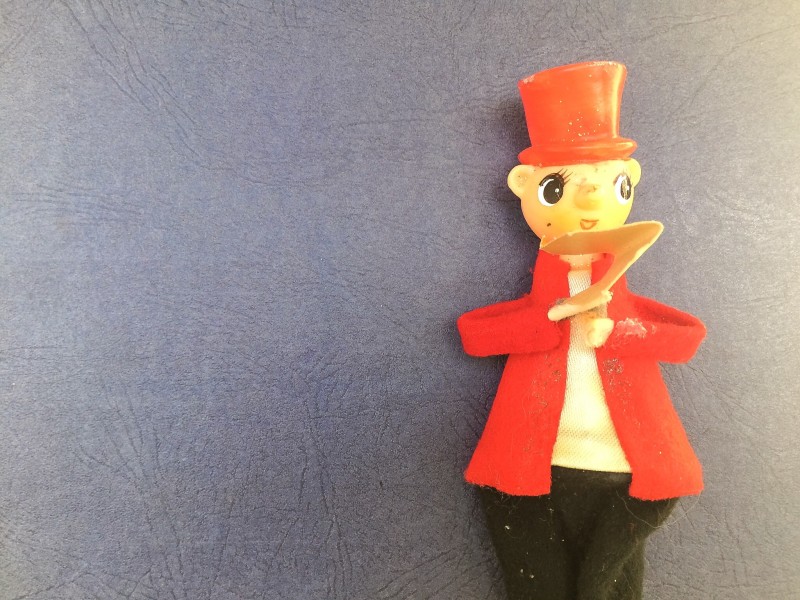 He stands at just about six inches high, and I think his unsteady gait (due to missing shoe) means that come holiday he will be found popping out of a jar, or nestled into firewood or somewhere unexpected that could use a pop of color. Vintage holiday decorations are one of my most favorite things, so I am sure I will put this odd couple to good use soon.

Last up is something I will probably not use personally but I had to take it all — a total of twelve different envelopes that were scattered throughout one single bin, all face down and mixed in with a lot of undesirable items– cracked Tupperware, a couple rusty tin cans, ugly stationery, and odds and ends. When I flipped them over, I wasn’t quite sure what they were. 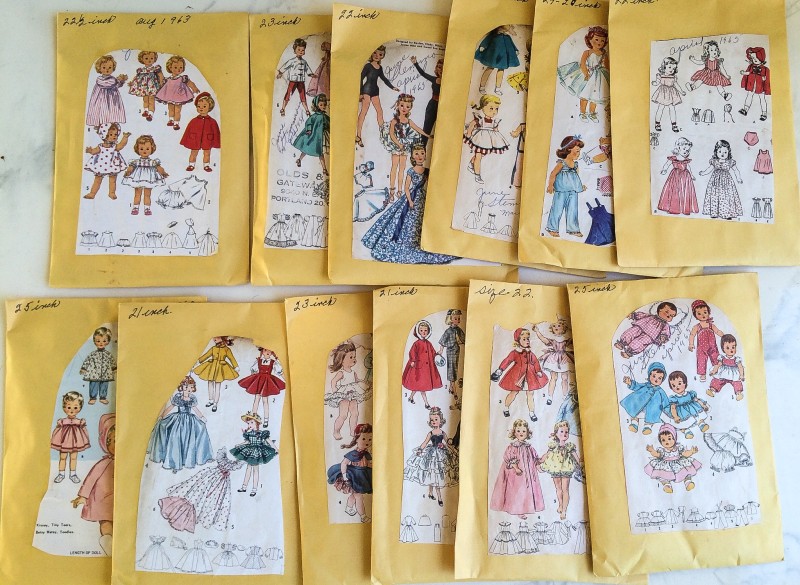 The color on the envelopes are surprisingly vivid considering the age; they all seem to be mostly mid-60’s, with one dated the month of my birthday, March 1965. I took the fact that we shared a birthday to be a sign that I was to take special care of all of these.

After all, someone must have had them  in their house for 50 years and by the look of it, never used them or did so with extraordinary care. Perhaps the person recently passed on, and the family just donated the whole lot to Goodwill. Anybody know anyone who does this kind of intricate sewing anymore?

If you guessed doll patterns, you are right. They are all patterns for 21 -22 inch dolls, and the directions and patterns inside are elaborate and seemingly quite complicated (I’m the wrong person to ask — I like to sew but anything beyond the basics is beyond my ability). One of the packages reads: “Designed for Revlon, Cindy, Missy, Toni Sophisticate, Junior Miss and Sweet Sue Sophisticate Dolls.”

First off, I want to now only be called by my new name, Sweet Sue Sophisticate. Kidding. Sort of.

Second, how refreshing to see lovely little outfits for dolls; when my daughter was interested in American Doll for about a week or so I was horrified by some of the outfits they sold for them. So many of them are either too racy, cheap looking, or just plain tacky. By contrast, and as pointed out by my daughter, doesn’t the middle black pant outfit below look like what Audrey Hepburn wore I think in the movie Sabrina (during the eponynmously named character’s beatnick period)? 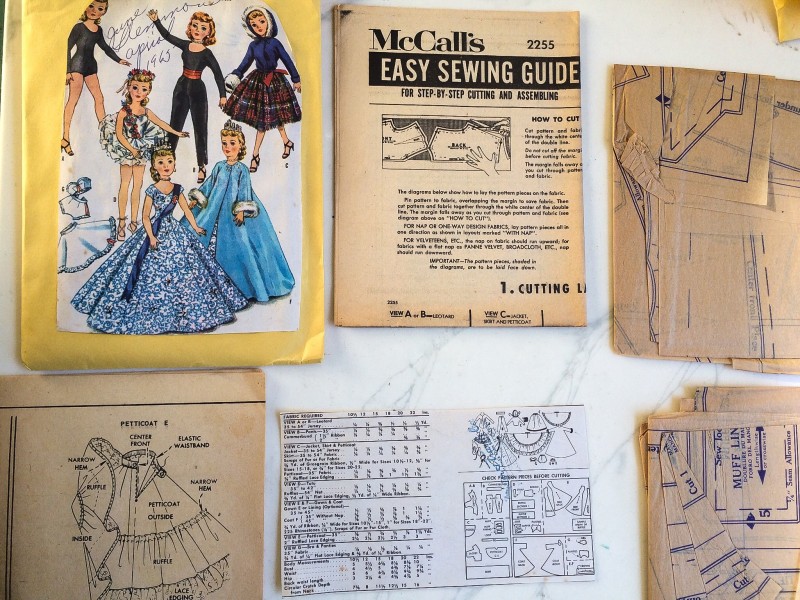 Another purchase without an intended use, but I just felt like I had to take custodianship here.

Maybe I will hold on to them in the deluded belief that I will ever make something like that, or my daughter one day will (more likely but still improbable).

Perhaps I will sell them all on Etsy to some enterprising young doll clothes maker, or someone who can do something really creative with the images. Some of them are really so lovely.

Then again, in this town, with so many creative people in our midst, I could imagine meeting someone at a party who has an interest in this kind of thing and just giving them the whole lot.

But until they find their next home, these envelopes (a few of them still with the Sears and Roebuck stamp on them) and my two little red friends have escaped the yawning craw of the landfill and will comfortably rest here, awaiting the step of their journey. 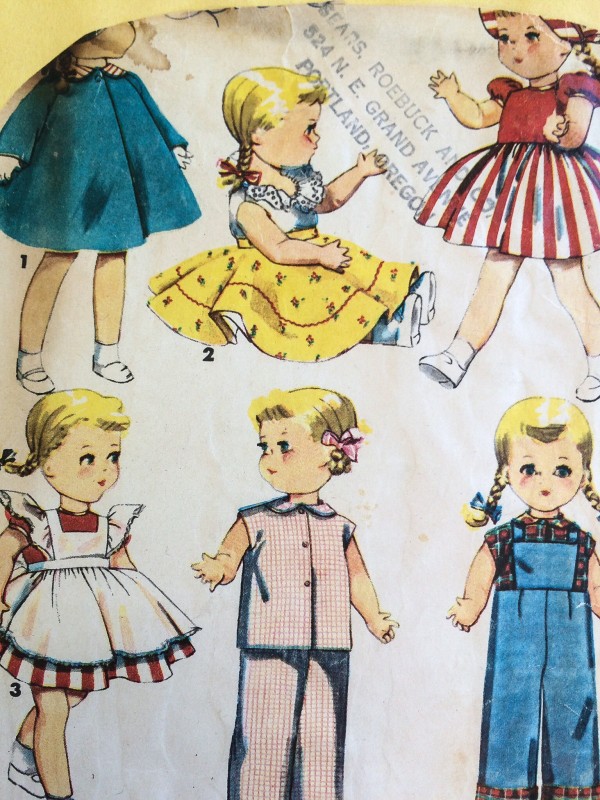