You are here: Home / Uncategorized / MEALS ON WHEELS – POTATO, LEEK AND ASPARAGUS SOUP WITH CILANTRO PESTO 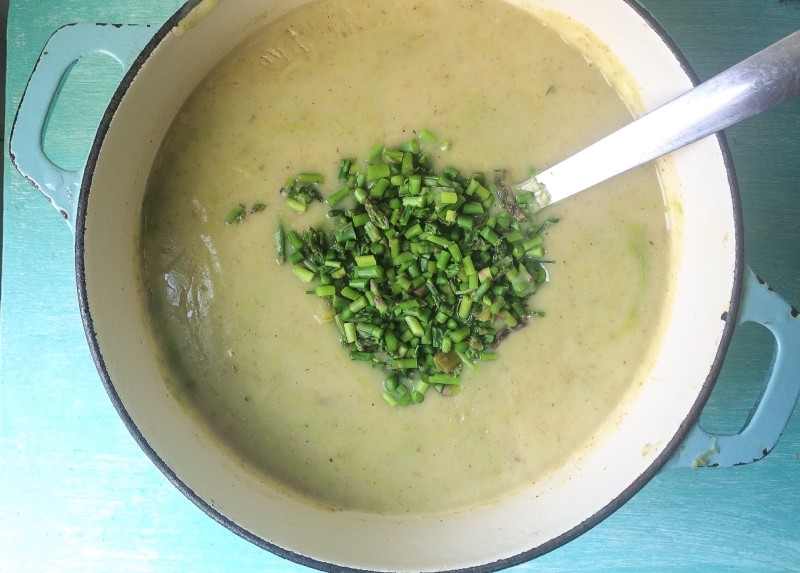 In our hearts, we Portlanders knew it was just a matter of time. It’s a good thing I prepared myself mentally, or it would have been really unnerving.

For those not from here, our city (as so much of the West Coast) has enjoyed an unusually temperate and sunny winter. This hasn’t been a good year for winter sports, but for those who love early daffodils, bake sales and walking everywhere in nearly 70 degree weather around Valentine’s Day, this has been a banner year.

But I have not allowed myself to get so lulled into thinking that this sunny warm weather is to be a constant companion, and while a gift, it too will pass. So even as people walked around in flip flops and biked all around town over the weekend, I was doing what any rainy day stockpiler would do — I bought stuff for a winter soup. Something told me I was going to be glad I did this later on in the week, and as the clouds formed overhead, I suddenly was.

Leeks. Potatoes. And because asparagus is looking gorgeous and inexpensive right now, a couple bunches of that, too. 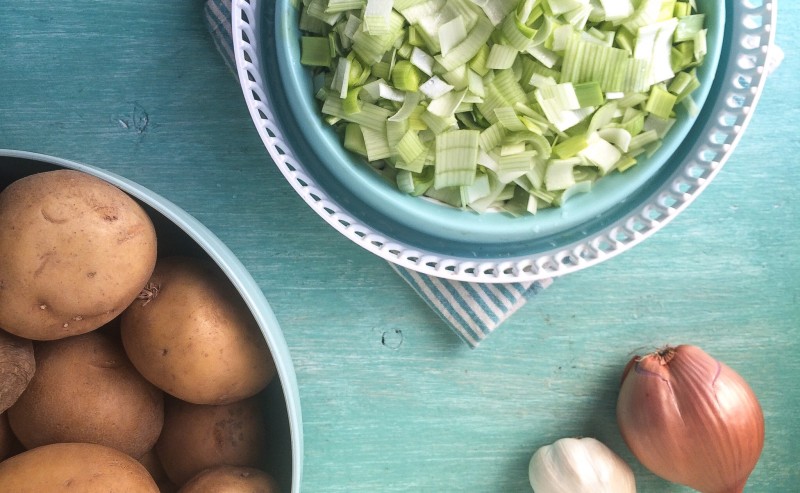 I got cooking, and along the way I discovered the handiest trick. For those who have already figured this out, I salute you. 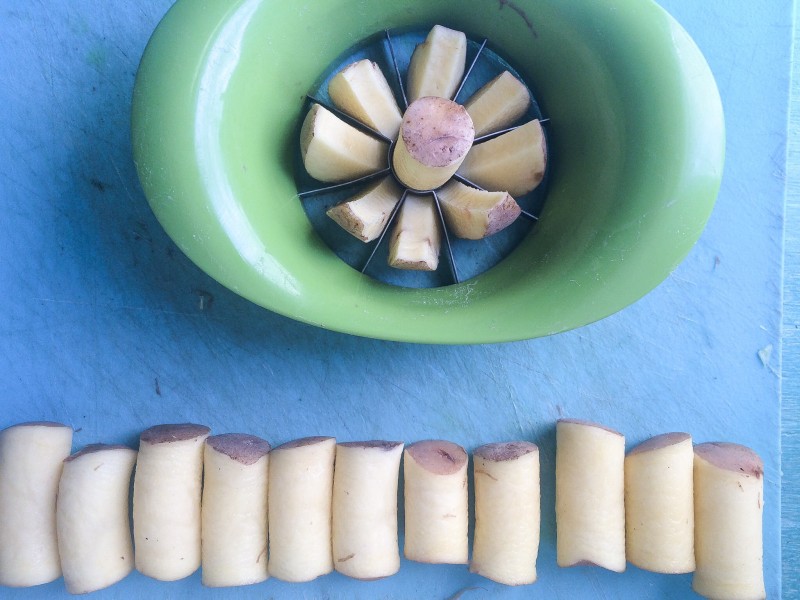 Apple corers are good for potatoes, too.

I had five pounds of small Yukon Gold potatoes, and they were all roughly the same size. I was in a hurry, though, and I wasn’t looking forward to dicing them all for the soup. Guess what – I didn’t have to. Before I knew it, I had about thirty potatoes cut into equal sized wedges (perfect for roasting if you wanted to but also great for mashed potatoes or, in this case, soup) and the cores I all cut in half.

Good news, I just cut my potato prep time in half. 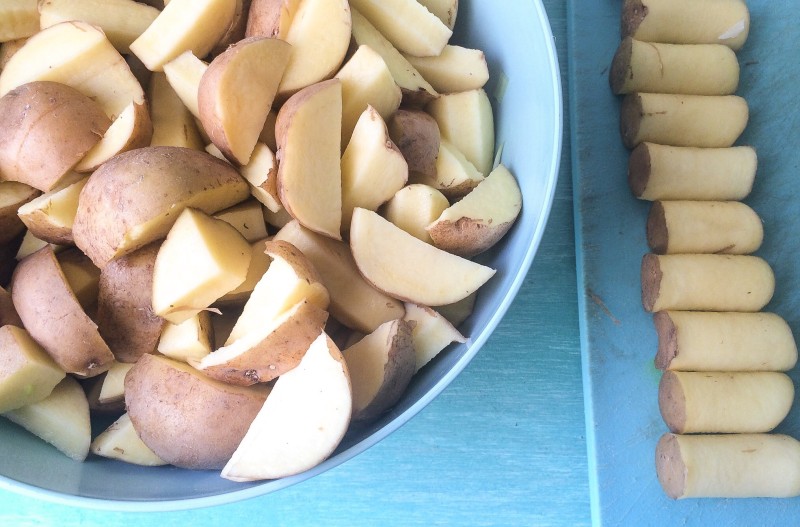 The rest of the soup after that was a cinch to make; I sauteed leeks, shallots, both green and yellow onion, added potatoes, covered it all in water, cooked until all was tender, and then pureed the whole lot.

I love how the soup took on some of the green from the leeks and green onion. At the last minute I blanched the tiniest slices of pencil-thin asparagus (it took less than thirty seconds) and then swirled that in. I made a quick cilantro pesto (cilantro, lemon juice, olive oil, garlic and smoked almonds) and got that ready for a last-minute infusion of herby goodness.

The end result was earthy with both potato and leek flavor peeking through, and a velvety, rib-sticking quality– and the kick of lemon and cilantro brightened it up considerably. It was the perfect bridge between winter and spring, just like March here.

Time to get crackin’. I was particularly excited to hit my route this week because I had a surprise for all my people.

My daughter Charlotte is a Girl Scout and this year she asked all the family and neighbors on her list if they would be willing to buy a box for a senior, and the response was fantastic.

All total we had 27 boxes to give to seniors. I started making tags. Lots of them. 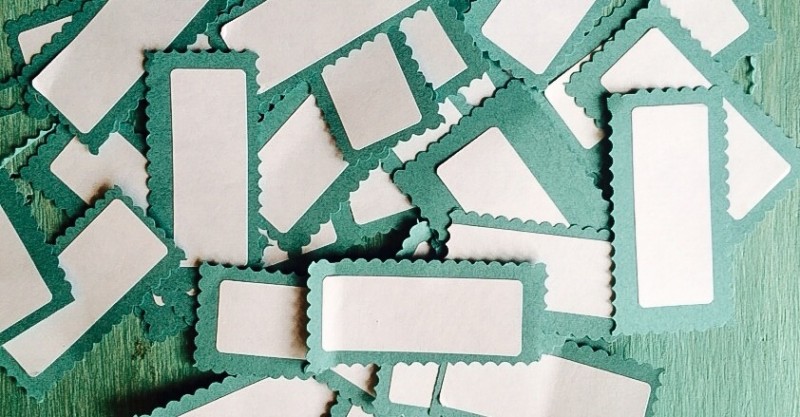 I thought it important that my seniors learned that they were getting a box because people they didn’t know wanted them to have a treat (I only bought five of them). When you are home-bound and isolated from much of the world, I think it’s really cheery to be reminded that random acts of kindness are out there, and from time to time you might just be the recipient of such. 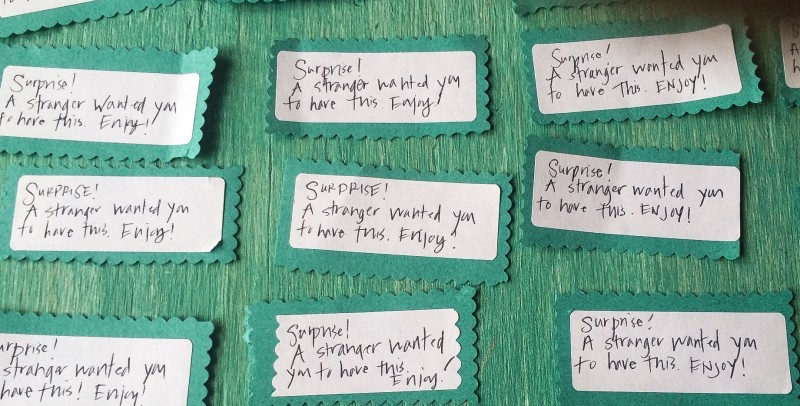 So I packed up all the soup and cookies and hit the road. 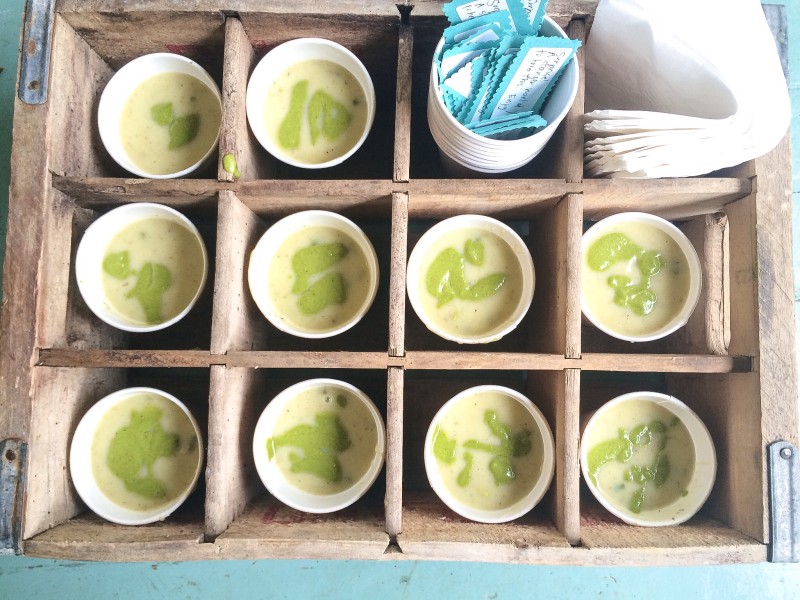 E., my Cuban woman, has shingles and was suffering but made the most of my company. She talked incessantly about her late husband, and I thought it was so sweet how her whole face came alive when she spoke of what a good husband he was, a great father, her best friend. I think he has been gone for almost twenty years already, but talking about him brings her such obvious joy. Seemingly, evoking his memory returns him to her, if only temporarily.

L., my woman with pancreatic cancer, said she was packing up things. Stupidly I asked her if she was relocating (she had moving boxes around) but no, she said she was doing it because she doesn’t have much time left and she doesn’t want to leave too much mess for her husband after her passing. She said this matter-of-factly, and took her husband’s ribbing (“enough of the ghoul talk, honey!”) in stride. Just when I thought I might get teary, I heard them gently quibble with each other about who most needs the car that afternoon. I guess life continues even in the face of impending calamity.

Not everyone, however, was as tickled originally by the sight of cookies.

J., my oft- testy veteran, was annoyed initially with the cookie offering because he thought I was hitting him up for a future sale. What, after seven years of delivering homemade treats I am suddenly using you as my Girl Scout Sugar Daddy? C’mon, Cranky Pants, have a Thin Mint and chill out for a minute — it might do you some good.

When explained that they were a gift, he took them somewhat begrudgingly, which made me laugh because this is how he always is. Why should altruism cut through the sludge of such grumpiness?

Everyone got cookies, almost everyone was grateful and because strangers had been generous with their donations, I was able to give some people multiple boxes. I even dropped some off on the doorsteps of past Meals on Wheels clients who are now no longer on my route — what a fun anonymous surprise they will get. Will they wonder from whence this sweetness came?

The remainder of the boxes will be given from the Meals on Wheels center as birthday gifts to other seniors in the upcoming month. Everyone should have something on their birthday, and Mary, our director, is especially considerate and attuned to such details. Boy is this organization lucky to have her.

So thanks to all who donated. We spread a whole lot of cookie love this week.

And for me, I enjoyed a taste of spring to come. 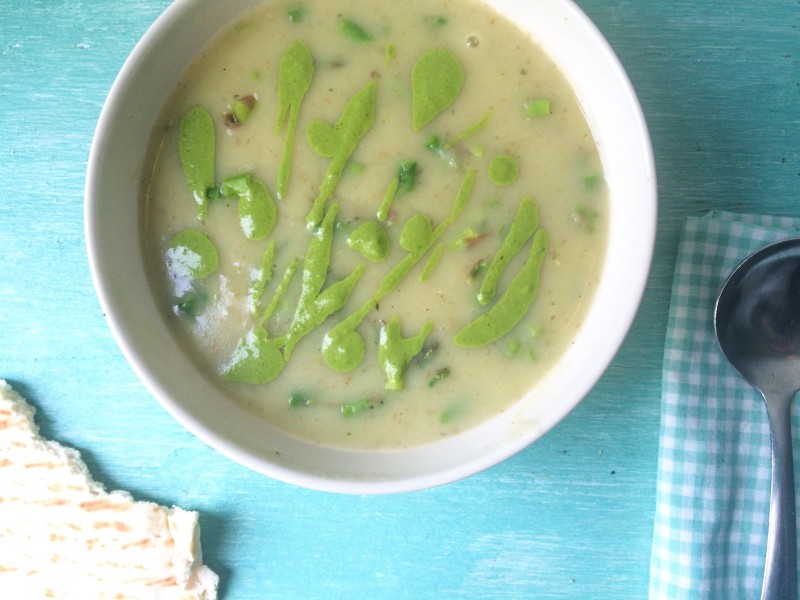 Print
Prep time
15 mins
Cook time
25 mins
Total time
40 mins
The great thing about this soup is you can make it vegan, vegetarian or meaty with the addition of chicken stock and bacon garnish if you so choose. Either way, it's like a baked potato in a cup. And that, my friends, is a very good thing.
Recipe type: Sarah Kline
Serves: 6 large servings
Ingredients
Instructions
3.2.2925