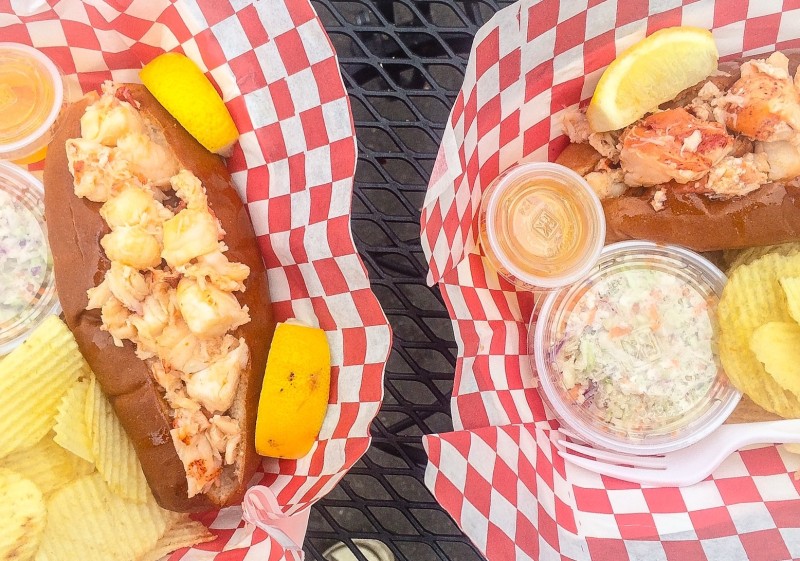 Summer’s end is so bittersweet.

Last of the daytime picnics. The end of pool time. Sleepover and block parties and large groups hitting food carts. Leisurely trips away with the family. Games on the front lawn culminating in ice cream sundaes on blankets. 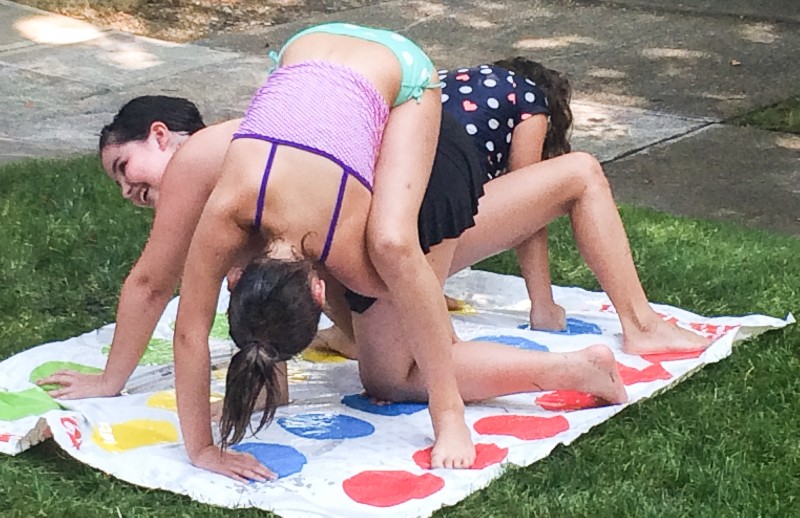 Say goodbye to the farmer’s market with its abundance of tomatoes and peaches and so many beautiful things. 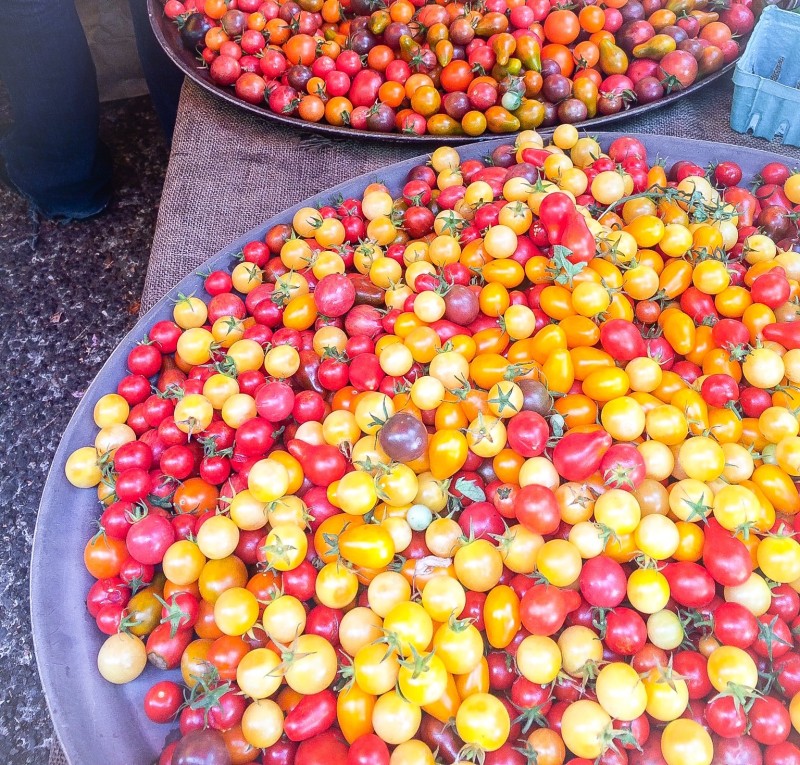 Hello to sharpened pencils, posted school schedules, and meals at the same time each night. 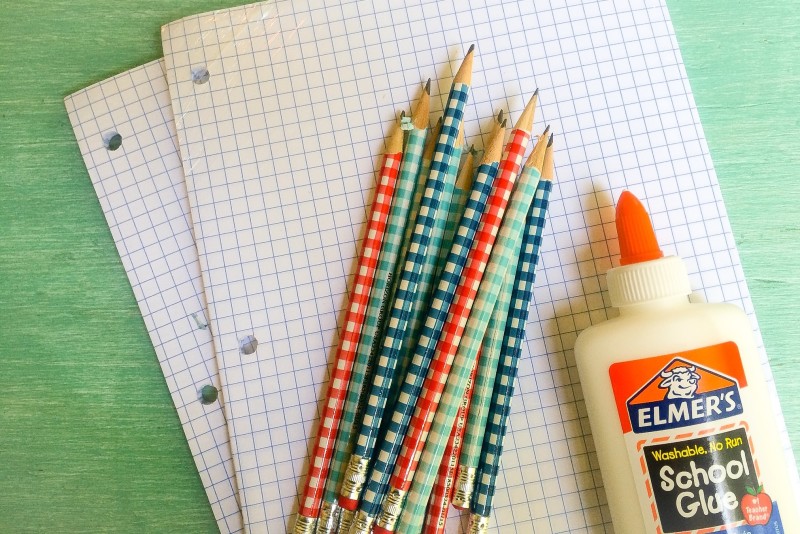 Every year at this time I get melancholy as I feel fall’s first pull in these last days of summer vacation.

Languor and spontaneity will soon be replaced by industry and scheduling, and my gang will find themselves separated by different daytime locations, and competing demands for our attention.

Little Miss Summer Fun over here will have to take off her party hat and go back to being the Big Bad Wolf — a nag demanding homework, and chores, and saying no to this and that.

But I decided that this year  I wasn’t going down without a fight. I’m going to plan some fun things to look forward to in September and I’m going to grab as many last minute good eats as I can.

First up, I need to talk to you about lobster rolls.

One of the yummiest things I’ve eaten recently was a lobster roll from a food cart on 82nd. 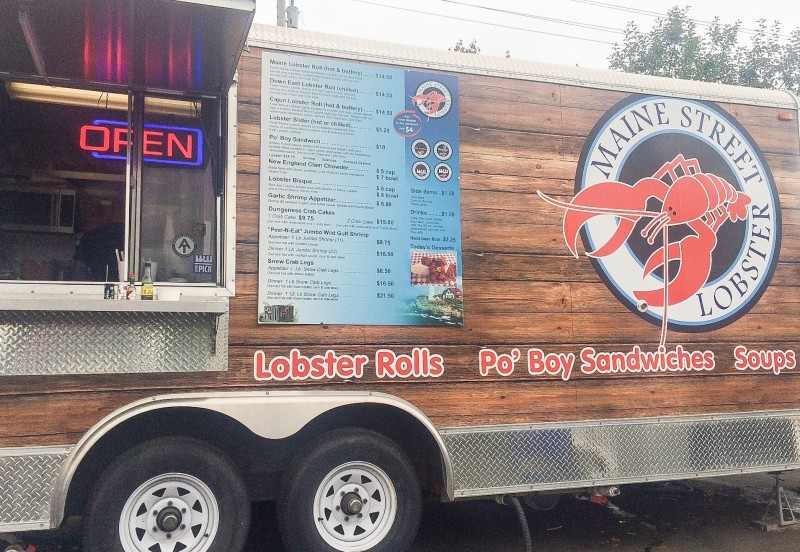 I hadn’t seen my dear friend Gillian in a while, and we had a lot of Cape Cod and Wisconsin trip details to share with each other. We’re both insane for lobster and missing East Coast summers, so heading here was a no-brainer.

Have you been yet to the cluster of food carts at 82nd and Johnson Creek? The pod is called Cartlandia and it’s quite a scene down there but in mind the primary draw is the Maine Street Lobster. Even slightly off the radar with its location, it’s attracted a fair amount of press and The Williamette Week named it one of the five best food carts in 2014.

Take a look at their recently expanded menu. 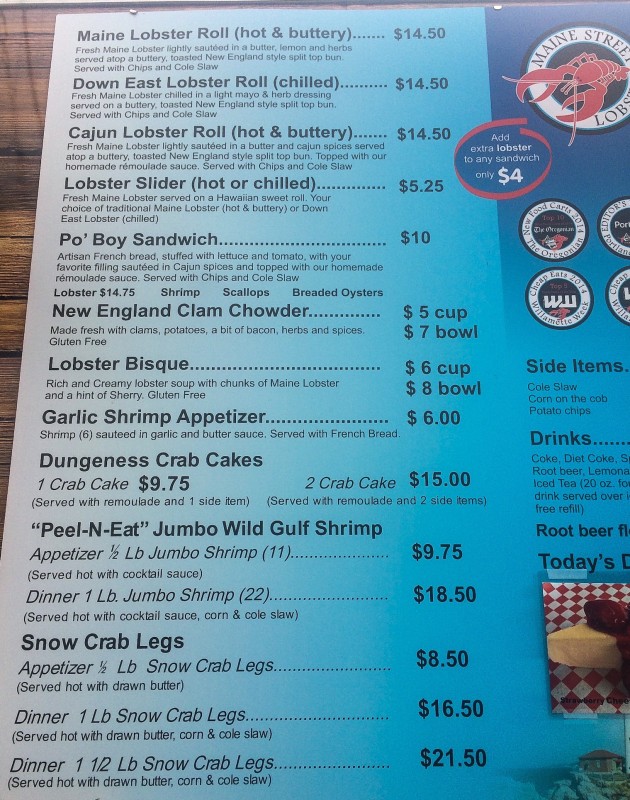 I would love to tell you I tried everything on the menu, but neither of us could see past our first choice, the Maine Lobster roll (warm and buttery). 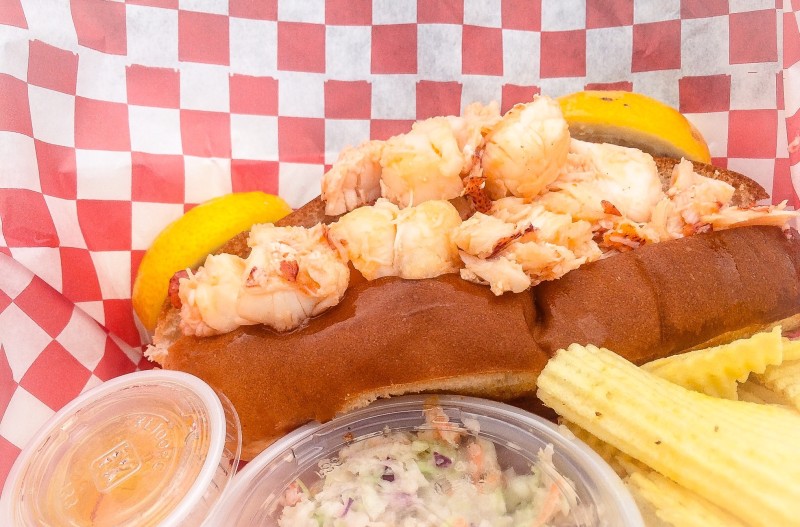 Gillian and I pride ourselves on having eaten our fair share (and then some!) of lobster rolls over the years — summers in Cape Cod and Maine and Boston and a voracious appetite for everything lobster have ensured that.

So when these two East Coast chicks say MSL has it down, I think we know of which we speak.

The roll? Perfectly buttered and griddled with just the right balance of heft and airiness of the dough. The lobster is brimming with uber-fresh claw and tail meat (supposedly they bring in live lobsters from Maine several times weekly) and served swimmingly in the roll with little other than warm drawn butter, a pinch of salt and the recommended lemon alongside. 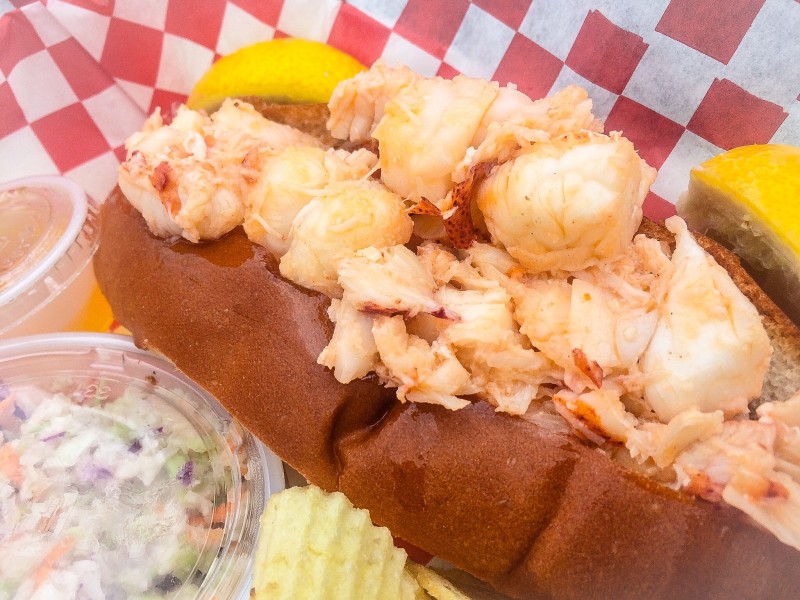 It was also unlike any I have had on this Coast– and kicking the tail of many I’ve eaten on the other coast.

At around fourteen dollars it’s one of the pricier sandwiches you are likely to buy, but having made lobster rolls at home over the years, I can say it’s actually a bargain when you take into account the abundance of fresh lobster meat and the execution is flawless. And it’s served with Ruffles, too!

Next time I can’t wait to try their po’ boys and chowders— the guy in the truck had us sample the lobster bisque and it was textbook cooking school perfection; a sherry-tinged chowder with an intense depth lobster flavor and a silken consistency interrupted only by little chunks of lobster meat.

Based on just the two dishes I’ve had, I can understand why this cart is so chatted up.

And then there is one other big party at summer’s end that I always look forward to — our Annual Block Party.

I love my street and it’s such a pretty late summer stage for coming together. 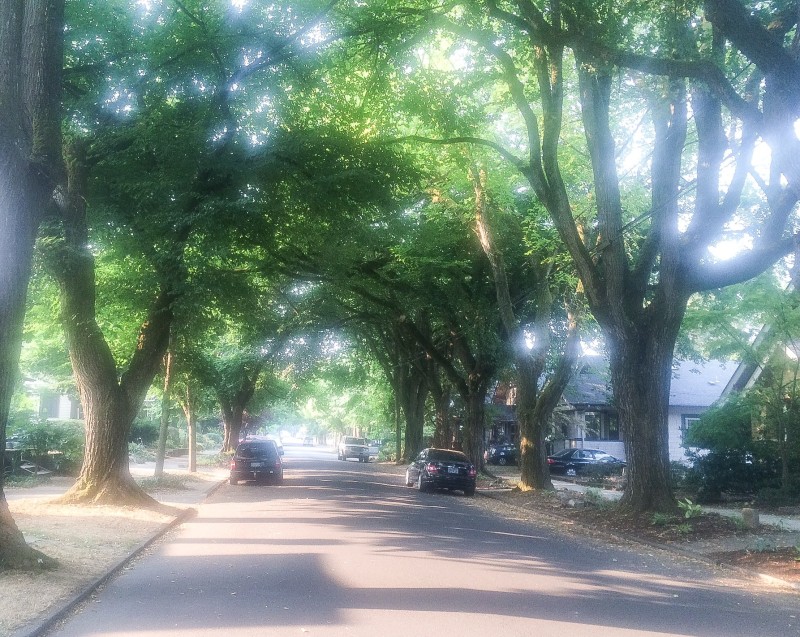 Each summer almost every street around here closes for one night so that neighbors can enjoy a little street-side pot luck. Over the years I’ve been invited to a number of them as they are usually open to friends of friends; some are huge affairs with dozens of houses participating and entertainment to boot, and some times they are rather more intimate affairs, like a small dinner party in the middle of the street.

It all depends on the age of the participants, the availability of people on a particular weekend, and the zealousness of certain party planners.

This year I knew ours was going to be a smaller group as many neighbors were out of town for this last weekend before school starts, but that didn’t stop me from making a ton of food. I also knew that I would be hosting five teenagers for the last big sleepover blowout, so ten pounds of pork butt seemed like a good place to start.

I cut it up into manageable chunks and covered the pieces with garlic, cumin, smoked paprika and oregano and let it cook at 250 degrees for about eight hours until it was fall apart tender. 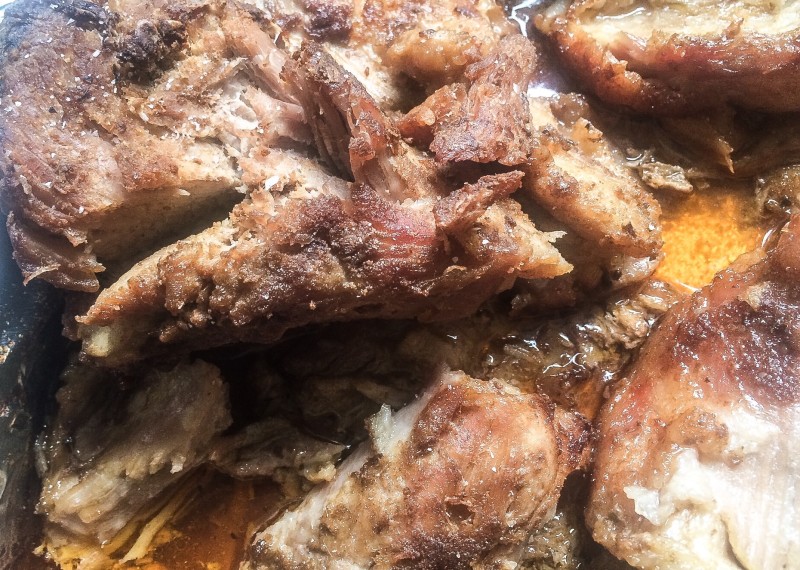 Have you read the Pinterest trick about putting large chunks of meat in your Kitchenaid to shred it all? I did this for the first time and so instead of sitting there with two forks and shredding all this meat, it was all done in under a minute — less work and more time for nibbling on all those crispy bits.

I had so much carnitas-style pork I decided to serve it two ways; in not-too cheesy nachos (I wanted the porkiness to shine through) and in mini-burritos. 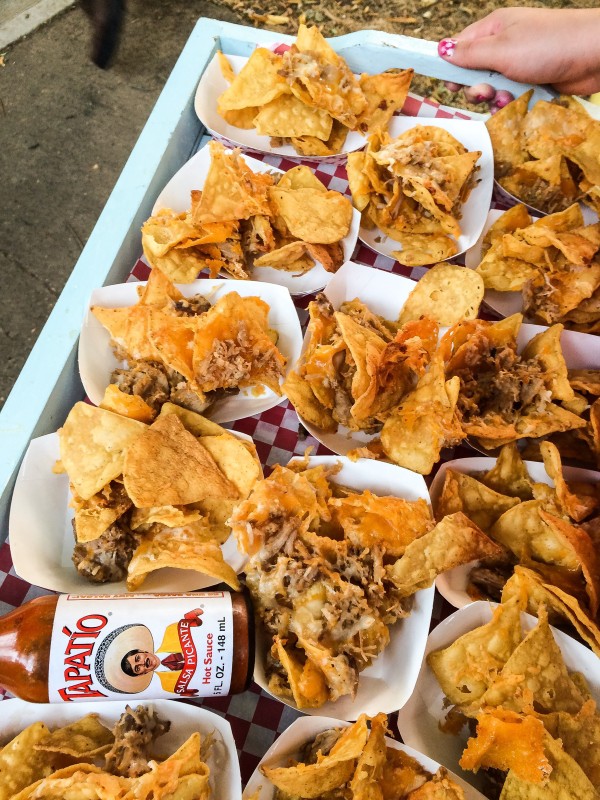 I started with the stellar Juanitas Chips of course, two kinds of cheese (sharp cheddar and smoked Jack) and the crispy pork, and I served this all alongside several different hot sauces and salsas.

I bought the smallest, freshest flour tortillas I could find, and made two different kinds of burritos — poached chicken, black bean and queso fresco and the other one was the roasted pork with fresh corn, black beans and sharp cheddar). 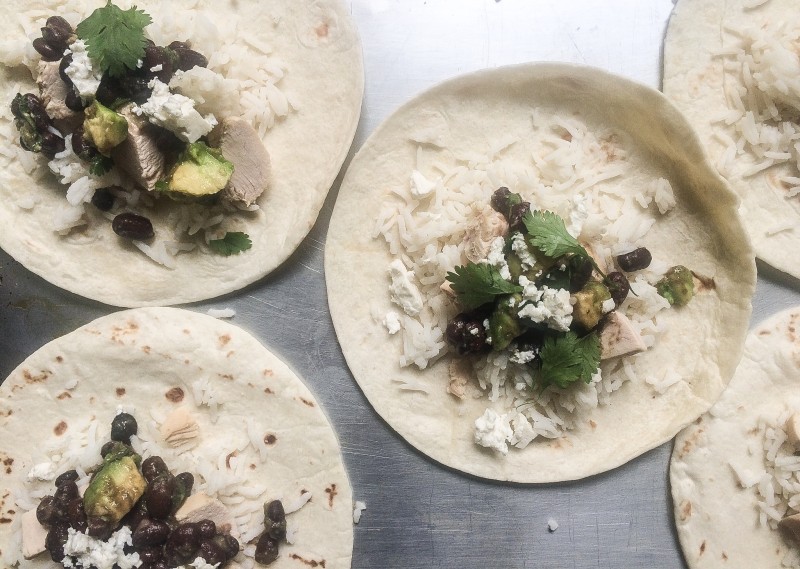 I rolled them up as tight as I could and put all thirty or so mini-burritos in the oven to heat up the cheese and make them the slightest bit crispy. 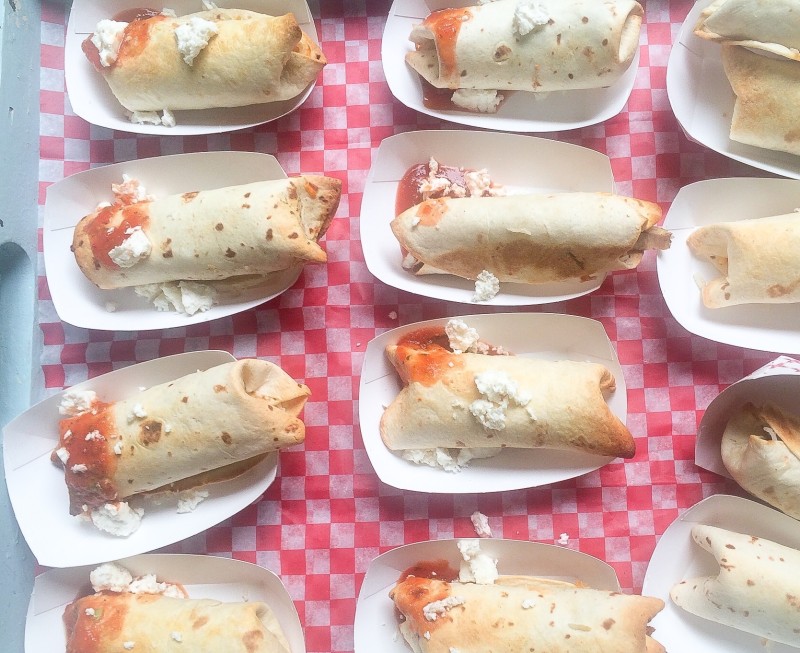 Some I added a dollop of smoky red salsa and more queso fresco on top, and some I left alone for the pickier peeps in the crowd.

I wish I had pics to show you of the party itself, but I left my phone at home and chose just to enjoy myself, catching up with neighbors I hadn’t seen in a while, getting my baby fix with newest additions to the block, and even meeting for the first time friends of my dear and very talented friend Alicia.

I love this town — it’s so small that if you hear about a couple you really should meet, you will, even before a friend’s active intervention. In this open, friendly, neighborly town, you will get to talking with a stranger at the library, or find yourself sitting opposite a new face at a block party and realize that you have this friend in common. Boom, more people to know and enjoy in this little corner of the world.

And so right now, with the clock ticking and school starting Thursday, there is so much yet to pack in.

Ice cream cones, last leisurely lunches out, long card games on the front porch, and perhaps most importantly, this. 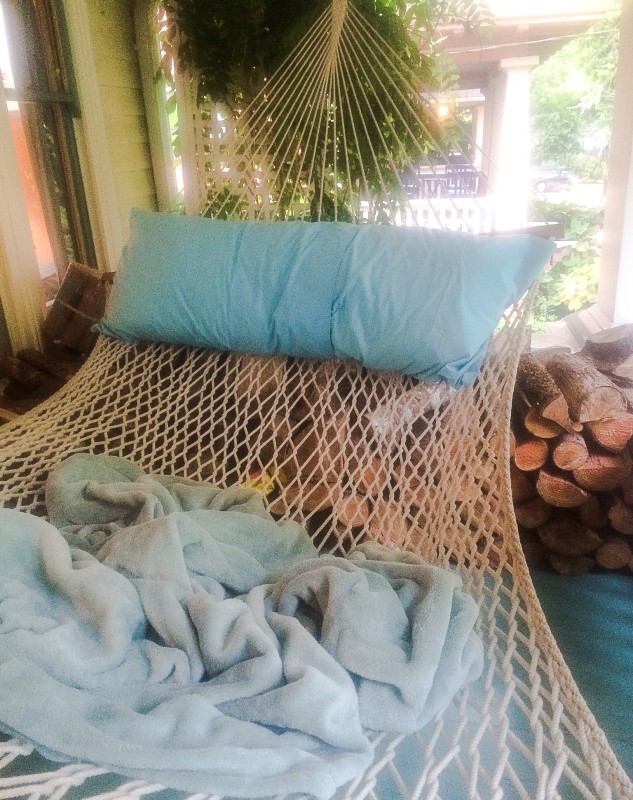 Anyone feel like picking me up another lobster roll?

I’ve got the perfect place to enjoy it.