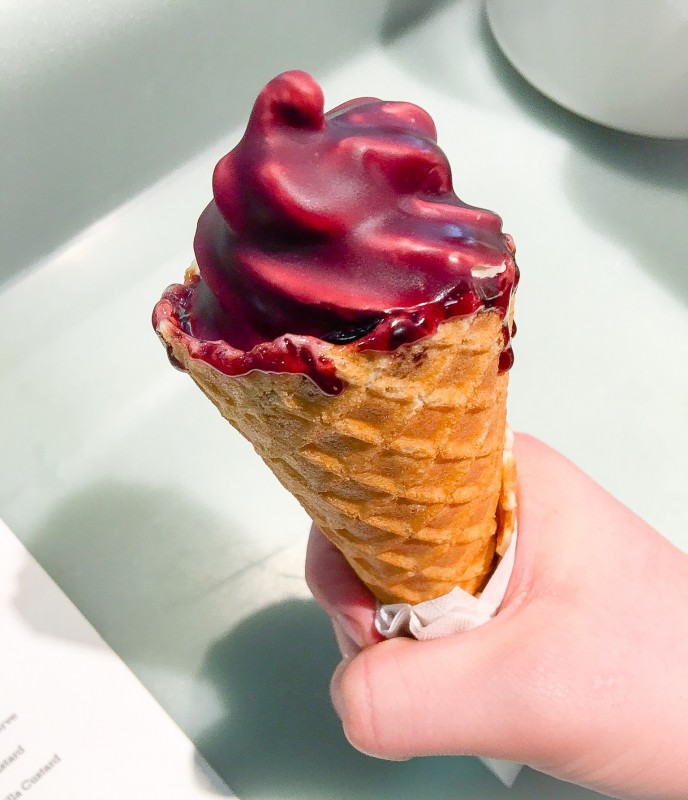 Portlanders have been crushing on this place long before its doors ever opened.

Perhaps you too have been caught up in all the excitement upon hearing of all the top-tier talent committed to Portland’s newest food hall.

For those who haven’t heard the buzz, let me bring you up to speed about this place on 2nd and Pine, just blocks from the waterfront. 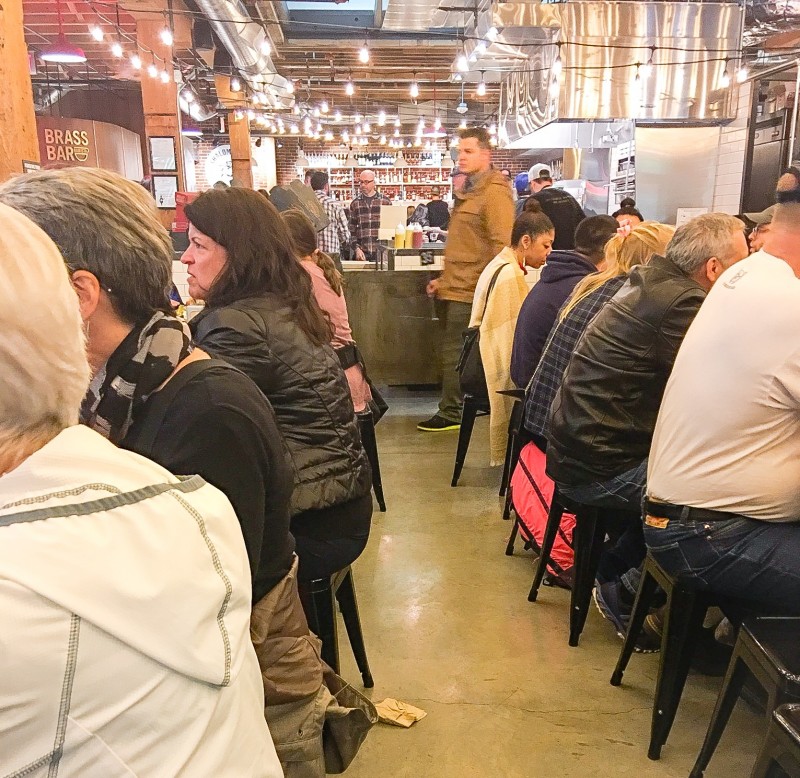 John Gorham (of Toro Bravo and Tasty and Sons) has not one but two places he’ll be overseeing here. 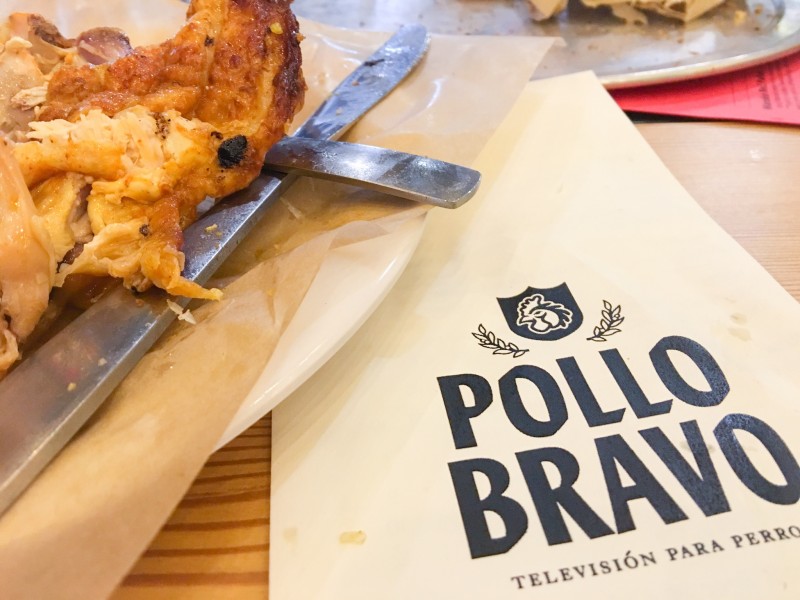 Plus he was overseeing Shalom Y’all, a Middle Eastern peddler of all things delicious: hummus, falafel, and vegetable delights. Plus they’re offering their amazing Shakshuka (once on the menu at TastynSons).

Ken Forkish (of Ken’s Artisan Pizza, Ken’s Bakery and Trifecta fame) has been teasing us in past months with the prospect of his laudable pizzas now available here by the slice and pastries (including unusual croissants made with spelt or rye flour). 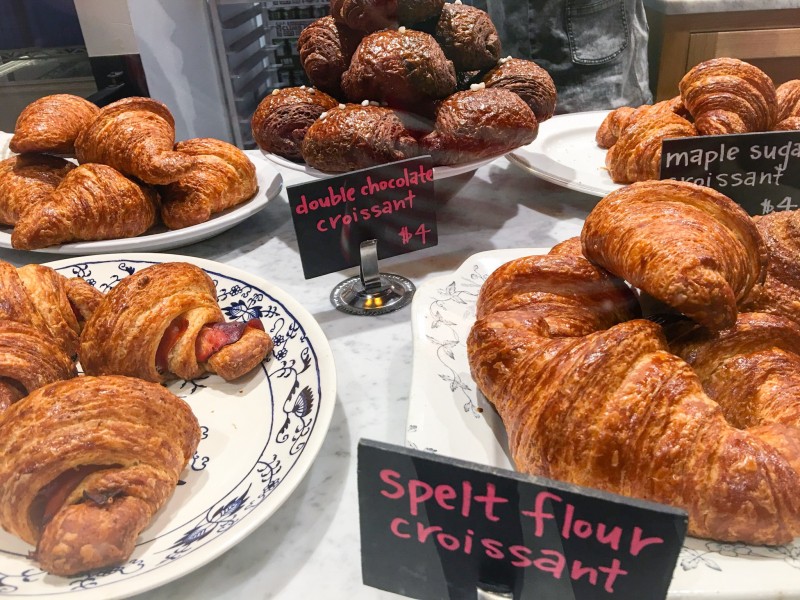 And then from Marukin, the much acclaimed Japanese ramen peddlers, one of their first outposts outside of their native country.

People were greedily slurping up bowls of this all over the room. 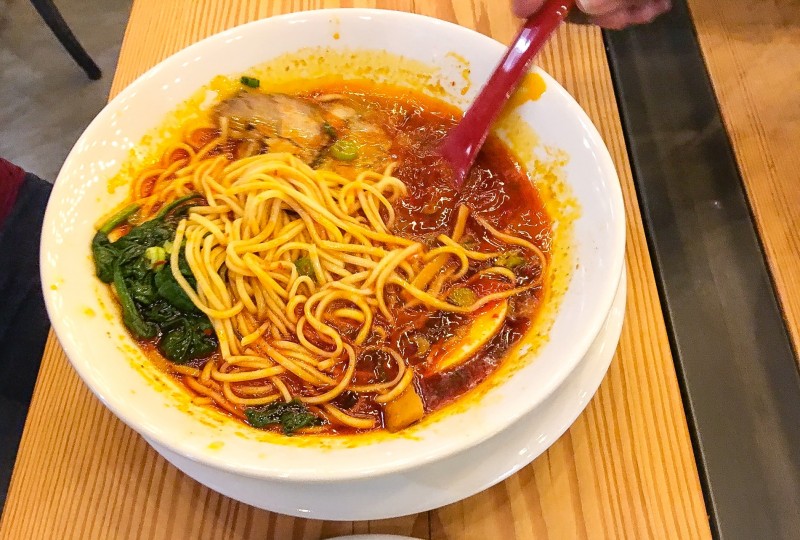 Additionally, there’s another outpost from Olympia Provisions: OP Wurst, a place devoted to hot dogs and frankfurters. And if there’s one universal truth out there, it would have to be that OP knows how to deliver meaty goodness (and the menu hints at an intriguing flavor combinations).

And then there’s going to be a place from coffee guru Billy Wilson (Barista) called Brass Bar.

And there’s a lot of buzz surrounding Wiz Bang Bar, the soft serve place from Salt and Straw.

Be still my heart.

And because I love my children very much, I took them there for my inaugural journey.

Instead of ridiculously long waits and a serious chunk of change at Ken’s Artisan Pizza, you can drop just a couple bucks and wait just a few minutes for some of his blistered, beautiful crescents of joy. 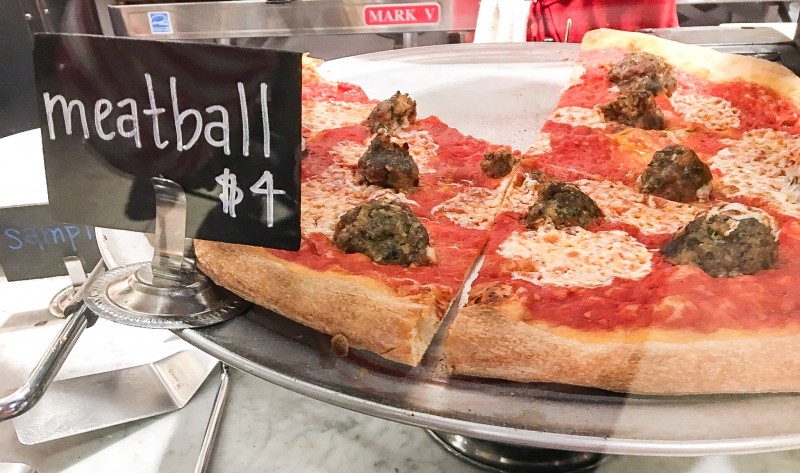 Look at the scope of the offerings here, people. 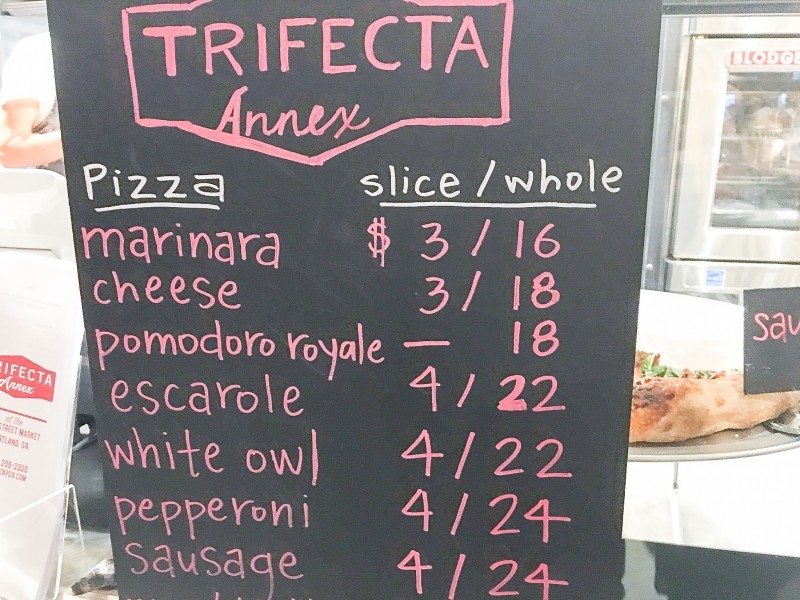 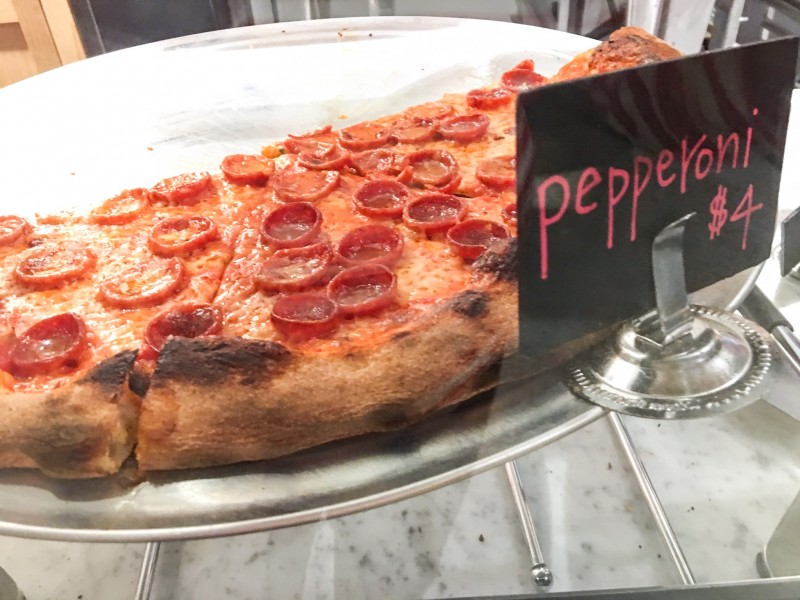 The pizza was spectacular and next time I can’t wait to try some of those beautiful looking croissants and pastries I just showed you.

I did take advantage of the bread selection here (an expanded version of the one at their fancier Trifecta Tavern) and I bought another giant loaf of Country Bread #3 for ten dollars (this loaf was originally discovered at my birthday dinner here).

It’s huge and so so so worth it (I’ll enjoy it all week in sandwiches, bruschetta, morning toasts and croutons alongside a Zuni-inspired roast chicken). 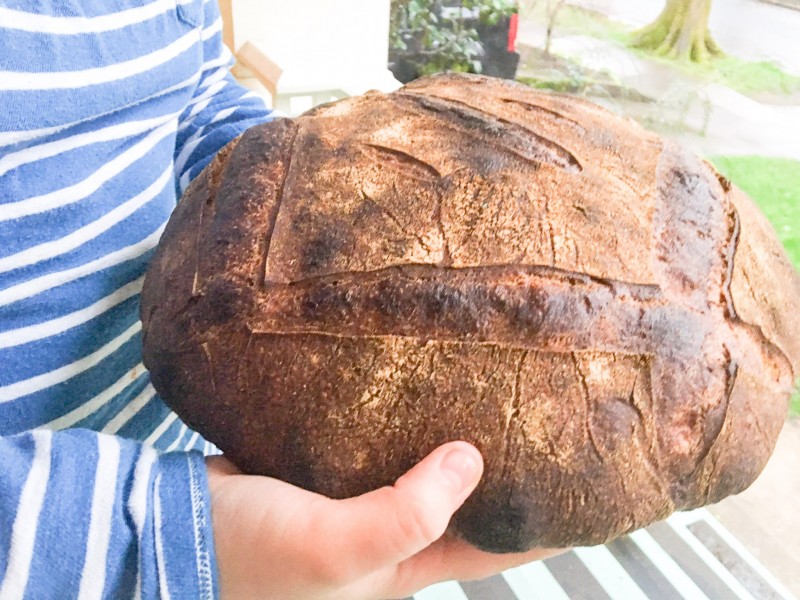 While the kids finished up their slices, I succumbed to the charms of Pollo Bravo.

I  love what the Toro group does with salads so I was especially excited to see their Winner Winner Chicken Dinner as a main offering: 1/4 roast chicken with radicchio salad and crouton priced well at ten dollars. 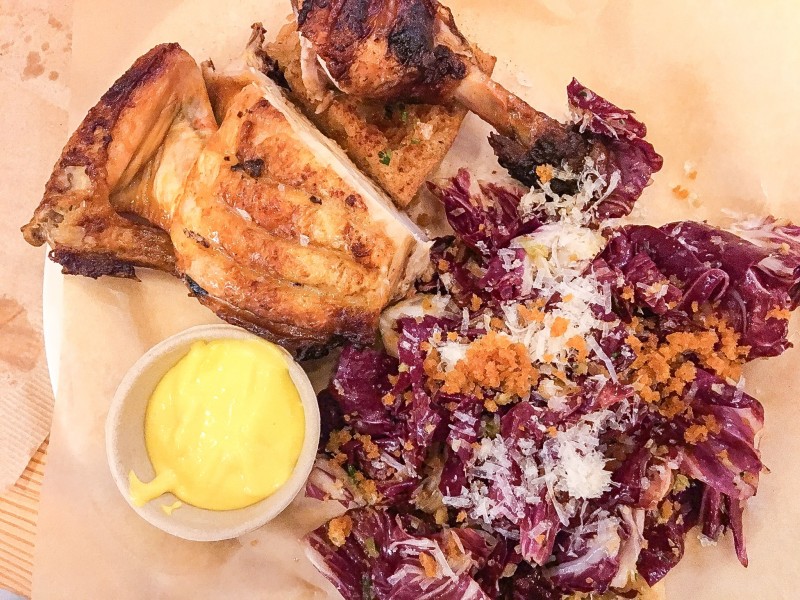 A luscious, slightly crisped chicken leg was enhanced by my choice of side sauce (here a vibrantly colored and flavored saffron yellow aioli) and a radicchio salad with a green olive tapenade, aged Manchego and crispy bread crumbs.

Only thing that didn’t scream perfection was a soggy but well-seasoned slice of bread (like a highly seasoned Panzanella crouton bite); it tasted yummy but gummy.  I would’ve far preferred a spear or two of crispy potato wedges or the crunch of crouton to this piece of soggy bread which collapsed under the juices of the chicken.

But that chicken and salad combo was perfection.

I can’t wait to try other things on the menu at Pollo Bravo (like Salt Cod Fritters and Rotisserie Pork Loin with Caramelized Onion and Romesco).

Or Marukin, the ramen shop.

Or anything else from anywhere in this building (some of the plates coming out the Shalom Y’all looked crazy good, too).

But for now, we concluded our meal with some soft serve from the crew that brought you Salt and Straw.

Take everything you remember about soft-serve and then send those thoughts packing. 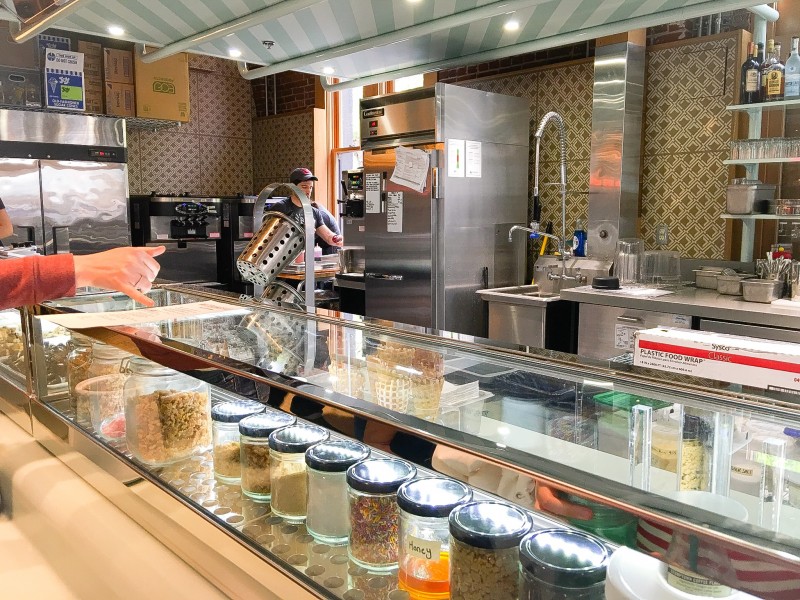 You decide the delivery system: Cone, bowl, sundae or concrete (sadly, sticking my craw directly under the nozzle was not allowable).

Wait, stop a minute. Reflect. How great is it that concretes are being offered here?

(For those sadly not familiar, concretes are like Blizzards but infinitely better as the ice cream is richer, purer, more custardy. And you’re probably at least ten pounds lighter than me because you’ve not become acquainted.)

Coming off of a pizza lunch, I advised moderation.

We went all in — waffle cones with soft- serve and one of their homemade Magic Shell toppings. 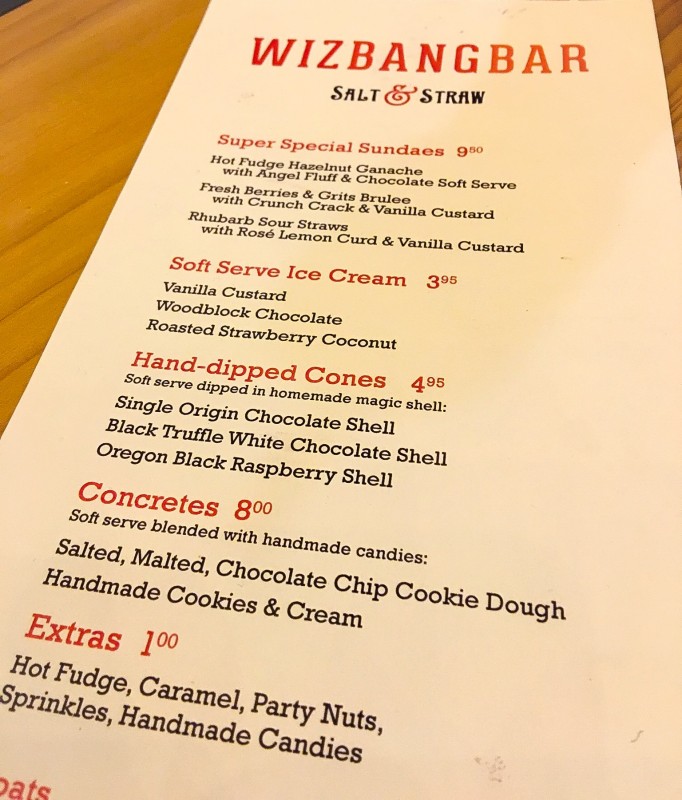 Okay, stop. You all know what Magic Shell is, right?

It’s that bottled concoction that freezes on contact with cold surfaces, creating a hard, crisped shell. DQ does it on almost everything, but imagine a version in which exemplary ingredients like fresh raspberries or Woodblock chocolate is the main ingredient in the secret formula.

I know, I know, that’s a mind-blower, right?

It was all that.

Amazing — and worthy of the hype. 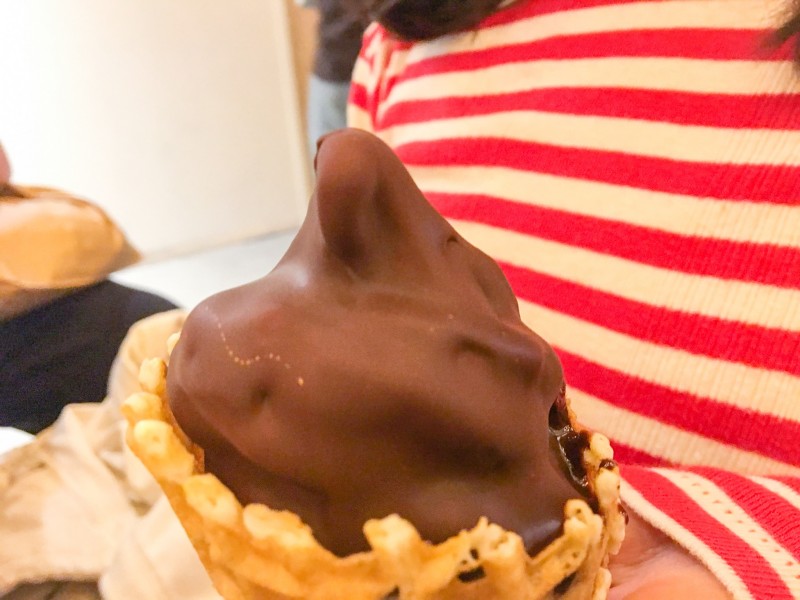 So that’s your sneak peak of Pine Street Market.

It’s so well-curated and perfectly executed that I predict it will be a draw for tourists and locals alike for many years to come.

(Think of Fanuiel Hall but smaller, more manageable and with much better food and great seating.)

It now feels like we’ve got a grown up food hall that’ll be the envy of any major city– and something we can all revel in daily.