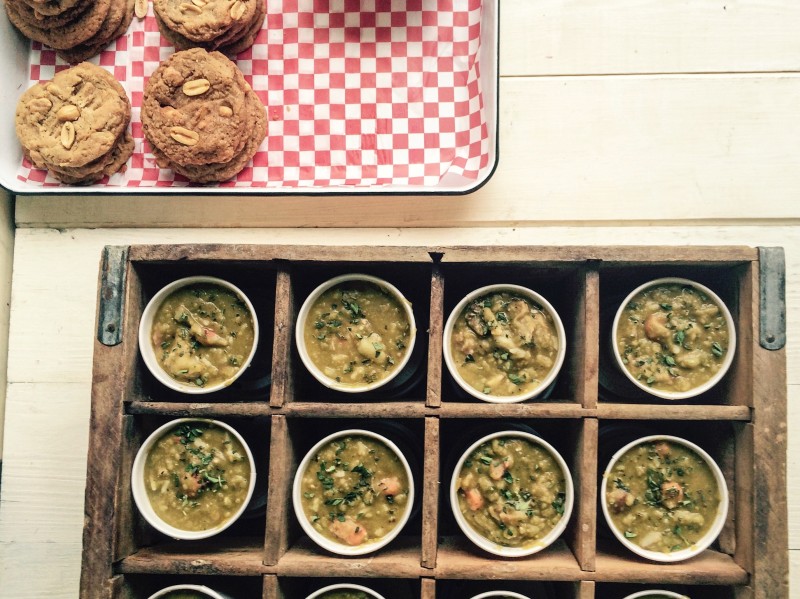 How on earth did this happen?

When I first started driving for Meals on Wheels six years ago, I just delivered the food they had made in their commercial kitchen. Not long after, I started adding a homemade treat each week and the reaction was so strongly positive that I didn’t have the heart to stop. I will never forget the look on one of my senior’s faces when it dawned on him that I had nothing extra for him. It only happened once, and now I haven’t got the stomach to arrive at a senior’s door without something, anything, no matter how small to add to their pre-made meals.

Of the hundreds of weekly deliveries I have since made, 90%of the time I make something expressly for them, with the other 10% of the time I give them something that looks great I have bought while out and about — buttermilk donuts, Swiss truffles, cinnamon buns, Christmas candies. When I can’t bring something from my own kitchen, I bring from Portland’s.

Now, however,  I find that I am usually making something savory as well. I have two people on my route that eschew sweet baked treats (one’s gluten-free, one’s diabetic) and not wanting to leave them out of the goodie train, I try to include something savory that they can enjoy as well. (One day I may jump on the gluten-free sweet train but not yet).

That’s a whole lot of cooking and baking my friends — usually one savory and one sweet treat for 16 people every Wednesday morning. And, of course, it needs to be packed up individually as well.

Do I need to do this? Heaven’s no. Do I love to do this? Hell ya. Does this mean a mountain of dishes later? Unfortunately, yes. But do my family and friends also get to partake of extra goodies? Absolutely. 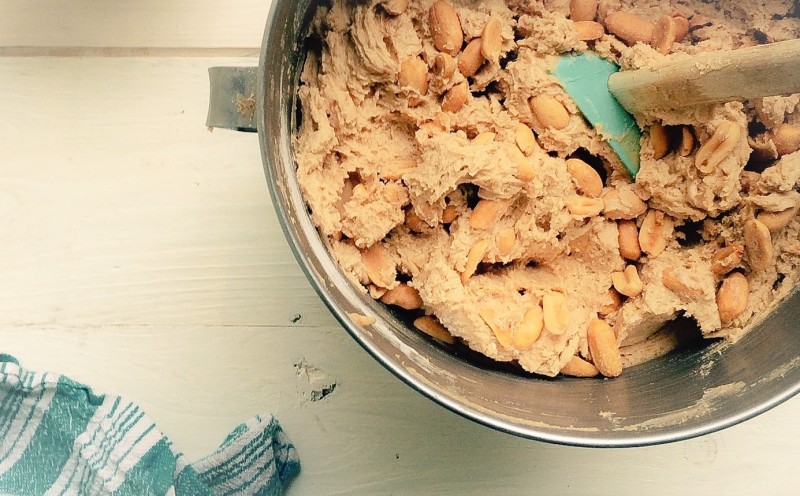 So first off this week, Peanut Butter Cookies. I recently bought a new cookbook, Sally’s Baking Addiction and it’s a doll of a book. I saw it at Powell’s and so many recipes were drool-worthy that I had to get it. I was drawn to the Peanut Butter Cookie recipe and thought that this kind of old-fashioned cookie would be right up my seniors’ alley. You can find the recipe here. 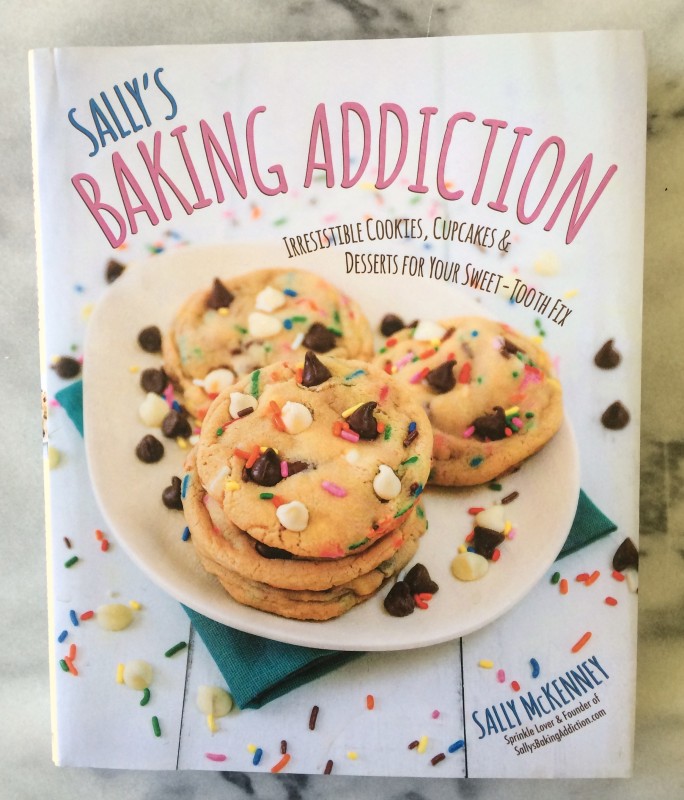 The only change I made was I used smooth peanut butter instead of chunky and I added a couple handfuls of extra-large peanuts to both the batter and on top of cookies. The recipe was a keeper — the cookies were moist, intensely peanuty, and even tasted great the next day (I did triple the batch after all). Next time I think I will dip half of each cookie in a dark chocolate ganache, but this time they were perfectly delicious straight up.

Next up, a Smoked Turkey and Split Pea Soup. Last weekend I picked up a smoked turkey hock (or was it just a bone with meat on it?) at Gartner’s and I wanted to put it to good use. I don’t have a recipe per se as I improvised as I went along, but the method was simple and the ingredient list ridiculously short – turkey bone (feel free to substitute with a ham hock), split peas, garlic, onions, shallots– plus whatever you want to season it: spices, lemon, hot sauce.

All aboard Soup Central.

Saute a couple of onions and shallots (all sliced thin) until golden. Add that to a stockpot with 2 pounds of split peas, one ham or turkey hock and water to cover. Add a couple tablespoons of your favorite spices (I added fennel, cumin and oregano), bring to a boil, and then let simmer. Allow it to cook away, adding whatever veggies you have on hand (I put in sliced fennel and carrots, tiny cubes of red potatoes along with some minced garlic) in the last 20 minutes. Remove hock and chop up any meat that clings to the bones into tiny pieces. Season to taste with lemon, salt, pepper, and hot sauce if you like (I used Sriracha). Delicious!

I am particularly glad this Wednesday I didn’t arrive at doorsteps empty handed.

R., my 87 year old widower, told me the story of how he lost his beloved wife 17 years ago when she went off to a swimming class and never returned. He told me how hard it was to learn to grocery shop and cook for himself, how much he realizes now she did for him then, and how much he misses her now every single day. He said her name was Mary Fran, and he derived visible pleasure from just mentioning her name.

His mourning was palpable even as it reached the two decade mark, and I was both stunned and moved by the vulnerability he shared with me, a near stranger. As I left I noticed that his house was a moment frozen in time (probably not a touch changed since Mary Fran’s passing) and I walked away with us both near tears.

C., my senior with the bad vision (I mentioned her in a previous post), initially confused me with her live-in caregiver and looked really ragged, with her eyes looking rheumier than ever and her breaths sounding labored. I am worried about her, but leaving her with soup and cookies was all I could do.

And then there was B., my client who loves good food as much as I do. She told me how much pain she has been in since last week’s skin graft operation (necessary after a very bad burn the week before). I can’t imagine how painful that would be.

It was an emotional week.

Was it a downer? 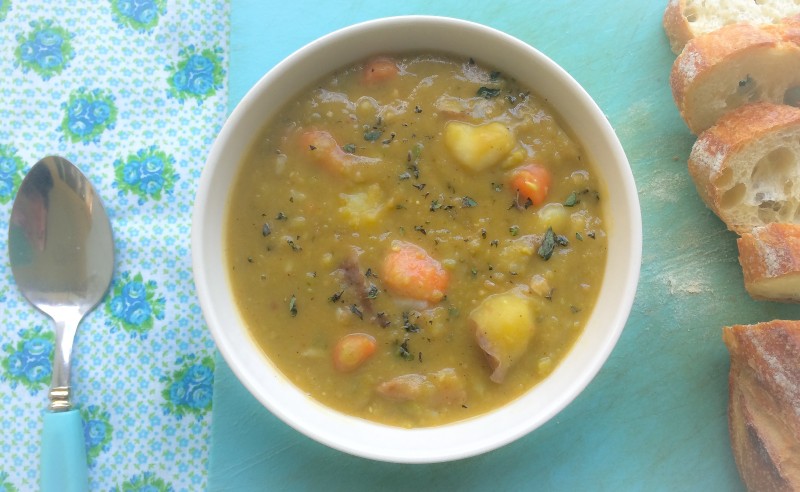 No, as I sat down for a bowl of my soup after my route, I thought about my day.

I realized that I walked away with a teary appreciation for a husband’s enduring love.

I had gratitude for my own eyesight.

And especially helpful for me right now, I regained a newfound appreciation for living (mostly) without pain.

And that takeaway right there is why I do my route — and give as much as I am able.