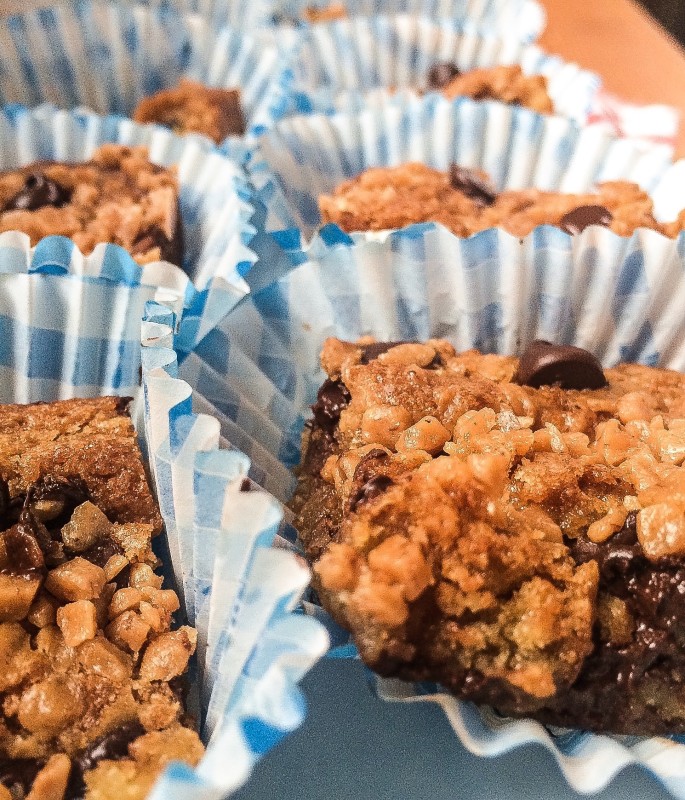 I am sure you’ve all heard the admonition: “Don’t grocery shop when you’re hungry.“

Do you think it’s because you buy items like this when you do? 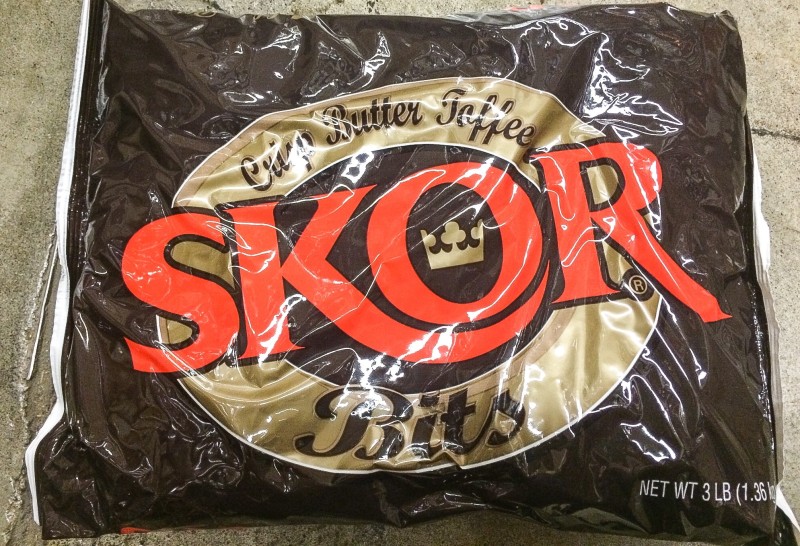 It’s funny, when I brought this 3 pound bag of Skor Toffee Pieces home from Cash and Carry, I actually applauded myself. What a smart choice! Only $13 for that much candy goodness? What a canny shopper I must be to have found such savings.

Ooops. My initial usage — don’t judge — was for the Skor-Caramel mini-milkshakes I made for a recent dinner party, and as amazing as they were, the recipe hardly put a dent in the bag. Consequently, I still had over 2 pounds of toffee pieces hanging around and looking for trouble (much like a high school senior on a parent-less weekend with a fifty dollar bill burning a hole in his pocket).

Now what? My husband has sworn off sweets and my daughter needs Skor pieces like I need another red lipstick. Time to minimize collateral damage in the Kline household and start spreading the Skor love around.

I took down one of my favorite baking books and flipped through the pages, looking for a recipe that might lend itself well with my Skor surplus. Notice how dog-eared the book is; it’s full of no-fail recipes that are like instant classics in my house. I pull it out regularly and have given copies as gifts to some of my favorite bakers. 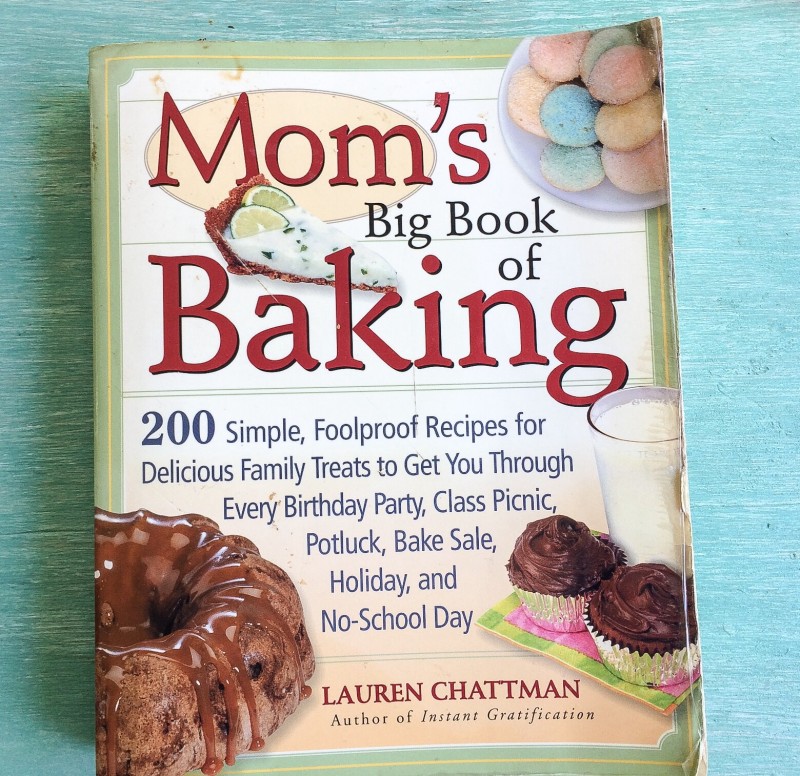 I’ve taken Lauren’s Pantry Blondie recipe and tweaked it; I omitted the walnuts in place of dark chocolate chips and 3/4 pound of these Skor pieces. Is there a soul alive that would argue for the former when the option of the latter is a possibility?

I may be alone here, but walnuts are an annonyance in sweets;  they’re something people add in when they want bulk, crunch or a little nutrition. Come on people, let’s be honest —  a walnut is wasted space in a baked good, taking up valuable room where a chocolate chunk, or peanut butter cup, or just more batter could reside.

When I find walnuts where they shouldn’t be — like in a brownie, for Pete’s sake! — it makes me so angry I want to key the person’s car who came up with the idea. Don’t they know a walnut’s rightful place is in savory foods, like salads and pasta and such? Honestly, what are some people thinking?

(I’ll have you know that I have made peace with other nuts in sweets, and I have even come to appreciate the hand the odd hazelnut, pecan or almond can play in a dessert’s success, but walnuts? They are empty suits as far as I am concerned in the sweet world, and no talk can persuade me otherwise.)

Okay, now that you see the wisdom of swapping walnuts for chocolate and Skor pieces, let me tell you a bit more about this recipe.

One of the greatest things about it is you probably have everything you need for this recipe without a special trip to the store. You can start them around 3 o’clock and still have them out of the oven early enough to enjoy as a quick treat after school – less than 10 minutes to prepare and only about 25 to cook. 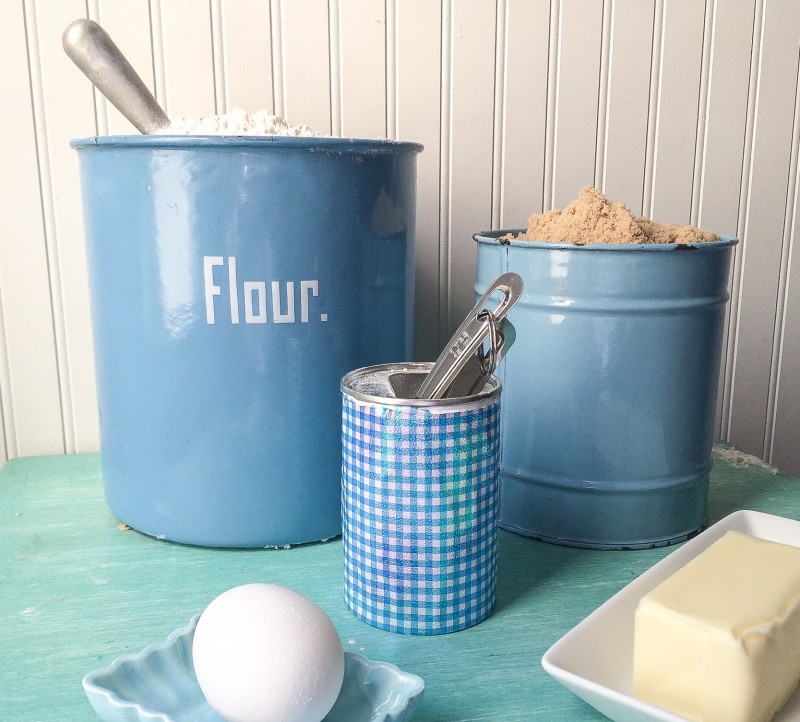 They also are a great way to incorporate any leftover candy goodies you might have in the house. All throughout the year I’ve used this recipe; I’ve added candy corn and peanut butter cups post-Halloween, red and green M and M’s after Christmas, and robin’s egg malt balls in the week after Easter. Hot diggity — they’re all good. 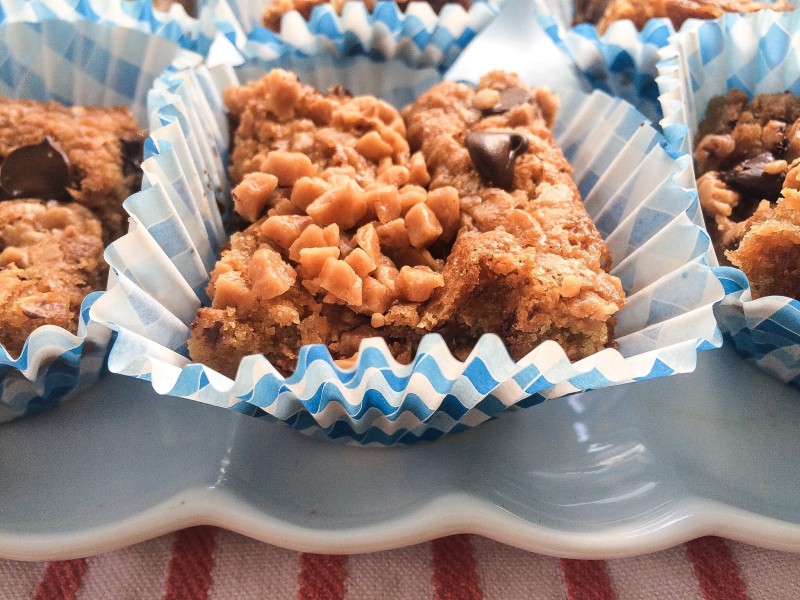 You know a recipe is not only memorable but versatile when you make it twice in one week. First batch went off to my Meals on Wheels seniors, and they were received with great enthusiasm. Another round was made this past weekend for a dinner party at my buddy Lisa’s; I knew I wanted to do ice cream Sundaes and thought that these would make a great base.

These weren’t my prettiest crew but when each blondie was later filled with Ben and Jerry’s Karamel Sutra ice cream, I don’t remember anyone grumbling too much about how they looked. 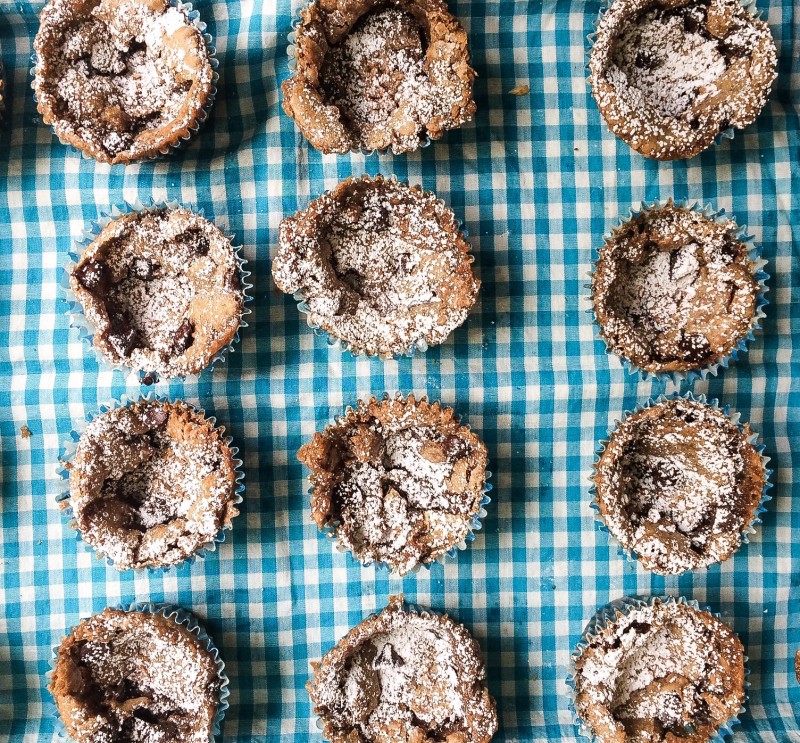 I took this closeup below so you can see the appeal of this recipe. Sure they look prettier with a dusting of powdered sugar, but when they are naked, you can see into their blondie souls. And what is there is a wonderfully butterscotchy (both from Skor bars and brown sugar), salty and chocolatey goodness.

What you can’t see in the below picture is that I also broke up a whole Lindt extra dark chocolate bar and nestled that in the batter, and that pushed it over the edge into greatness. 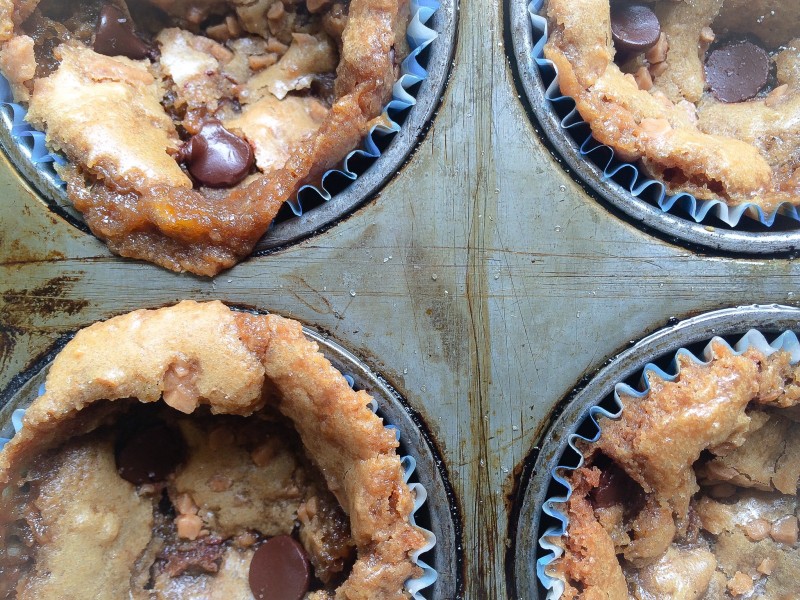 Look at that melted goodness in the top left blondie. Don’t you just want to peel off that molten Skor and go off in a corner and be alone with it?

No? Well, then, aren’t you the brave little soldier.

Print
Prep time
10 mins
Cook time
25 mins
Total time
35 mins
Other than the aforementioned walnut for toffee/chocolate swap, I make the recipe as is, adding only a little bit of good quality salt on top off batter. If you choose to bake in individual baking cups as I sometimes do, be sure to grease liberally the cups as these blondies are incredibly sticky and hard to get out otherwise.
Author: Lauren Chattman (with a few of my own minor changes)
Recipe type: dessert
Serves: 16 small squares
Ingredients
Instructions
3.2.2925

« A CHICKEN IN EVERY POT: PASTIS, FENNEL AND POTATOES
SEVEN REASONS TO LOVE OAKS AMUSEMENT PARK »