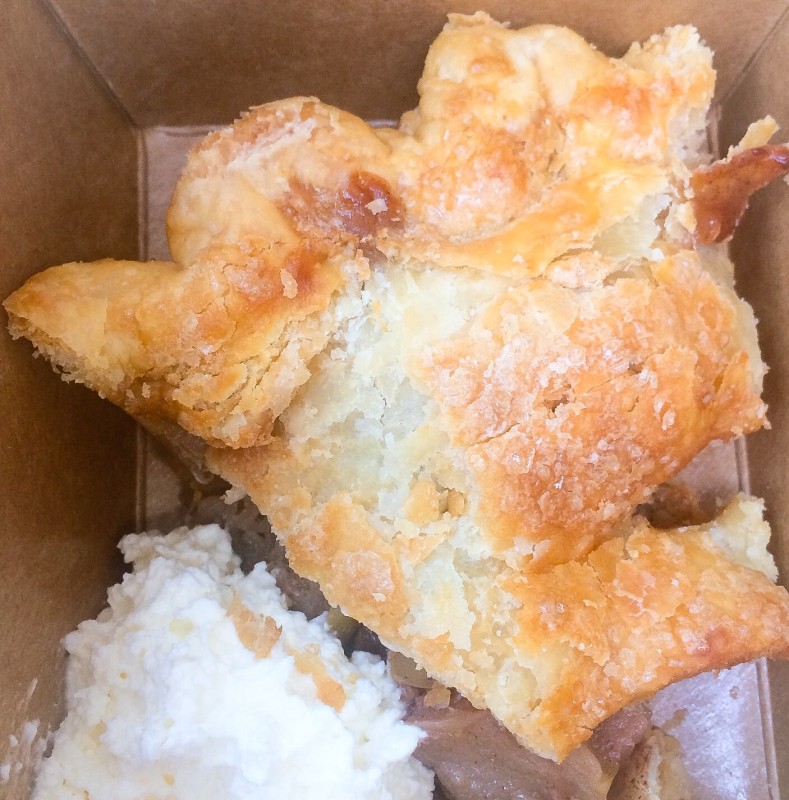 If you were dying, do you think this would help?

As many of you know, a very dear lady on my Meals on Wheels route told me this week she loves pie, and if I was to bring her anything, that would be the thing she would most want. Who can deny a woman with pancreatic cancer a little wedge of joy?

I think the world is divided up into Team Cake and Team Pie.

I am in the former (just the sight of a Devil’s Food cake in a magazine has me quivering in anticipated joy) but I know so many team members from the opposite side of the camp. Consequently, when I asked around as to where to grab some around town, there was lots of advice.

Have I made pie before? Yes.

Do I think I can make pie worthy of someone’s last piece on earth? Heaven’s no.

So It was time to go pie shopping. Let’s just state the obvious. Portland is PIE MAD. Restaurants, food carts, you name it. Pie. Pie. Pie.

And as if Alberta doesn’t already boast an embarrassment of riches, they also have this. 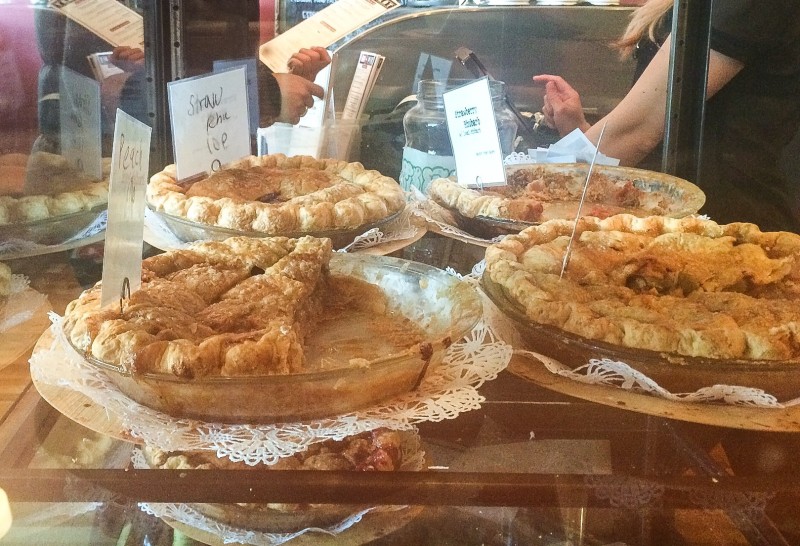 Random Order Pie Bar. Not just a coffee shop, a cafe — an EmPIErium of all things crusty and good.

Imagine a round-up of all your favorite pies (including pot pies and quiches) and a rotating selection of seasonal succulence (yesterday rhubarb was in heavy rotation). I walked in and everyone seated had a look of blissed-out, post-coital satisfaction plastered on their face. They were in the Pie Zone.

Taking a lead from the gal at the counter, I bought a slice of the pie that won Travel + Leisure’s Best of Series, the Tahitian Vanilla Sugar Salted Caramel Apple.

It smelled sublime and the look of the blistered crust was promising. I’ll head back to this place soon with a bunch of pie lovers so we can try them all (first up for me will be the chicken pot pie with farm vegetables in a buttermilk roux). Maybe we will order some of their Pearl Bakery Ciabatta egg sandwiches, too. Why not?

But for now, I had the blueberry-pineapple smoothies I had made at home and this pie in hand, so I headed over to visit L.

She was more lucid this time and without pain, but talked with a heavy heart. Her son and husband were not on speaking terms at the moment; I didn’t want to press for details, but I sensed they were jealous of each other’s closeness with her and unfortunately her current struggles had stirred up old grievances.

She said that she knew she was dying but didn’t want to go yet with so much strife around her.

“Can’t just this one time, it be about me?” she said. “I am so tired of their bickering, and then not speaking to each other.” She looked somewhere far outside the window. “They’re idiots,” I heard her whisper.

This was said without pity or rancor; rather, it was wistful, peeved and resigned in equal parts.

I agree, L., it should be about you. If not when you’re dying, when?

She clearly was asking for support, and they weren’t giving it to her.  I wanted to drag the two of them out of the different rooms they were in and slap some sense into them, but it wasn’t my place to do so. I scarcely know her and it would be inappropriate for me to intervene — I’m just hopeful that one of the amazing girlfriends she has visiting her will do that for her. Please.

Why is that when sorrow is at hand, some people butt heads like rams in a nature show?

Is it human nature to fight against one another when the real enemy is the impending mortality of a loved one?

She told me the hardest part about dying is letting go. It’s so hard to accept you’re not going to get what you want, she said, like get to see your family work together. Or, as she pointed out, to face the fact that you been told that your days of leaving the bed casually are over. Apparently doing so would be too dangerous for her at this point, so only quick bathroom breaks with two people assisting her are now permitted.

Just for one moment, reader, imagine what it would be like to be told to get back in your bed and not get up until you are being carried out. No more walks to the kitchen just to see what’s in the fridge. Or to the other side of the room to simply look out another window.

And certainly no more walks down the block, just to catch a glimpse of this. 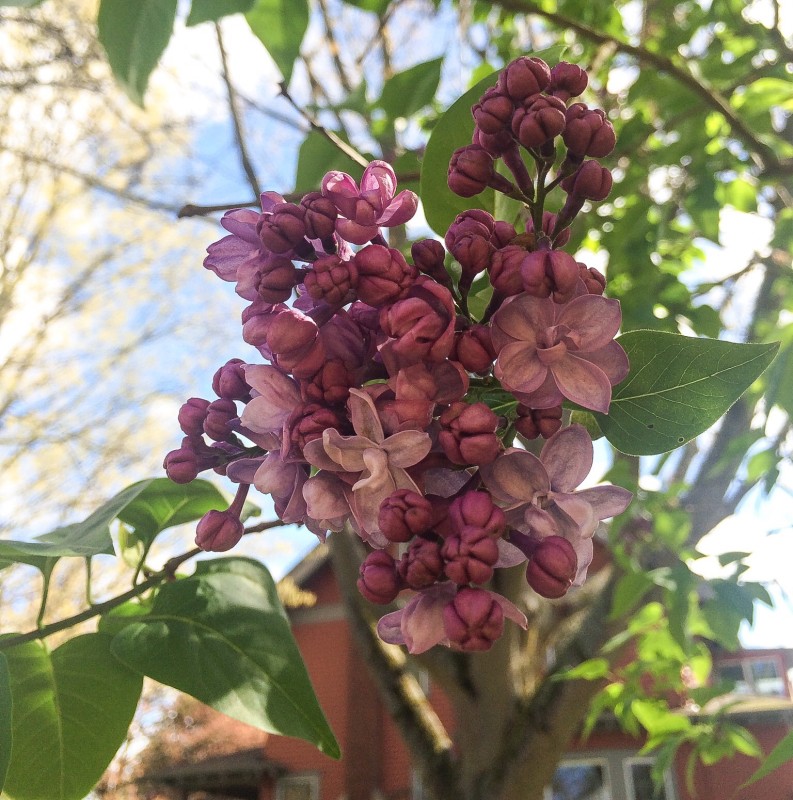 It made me realize that lilacs are just one block away and yet for her, they might as well be on Mars.

I kissed her cheek, said she was not to share her pie, and that I would see her soon.

Heavy of heart, I made my way back to Alberta. Earlier at the pie shop, I spied an old friend I wanted to visit. 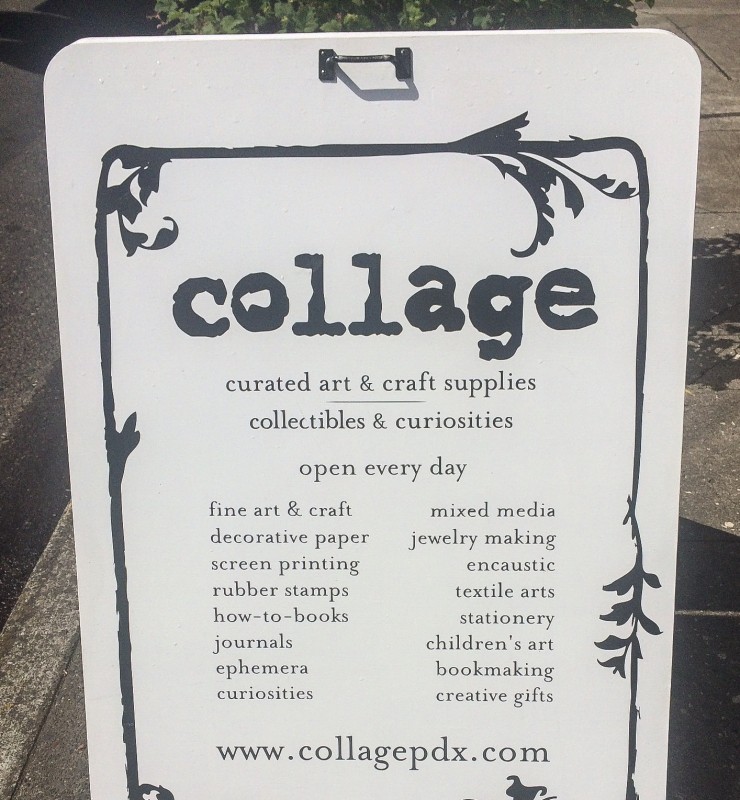 Collage is friend to us all. She is the most amazing jewel box of an art supply store; she has everything and it’s all so beautifully curated and displayed that just walking the aisles is pure pleasure. Pens, paper, journals, paint and sewing supplies, jewelry making and paper crafting goodies of every kind.

Look at these little wooden stamp blocks for sale. Hoo wouldn’t want to bring him home? 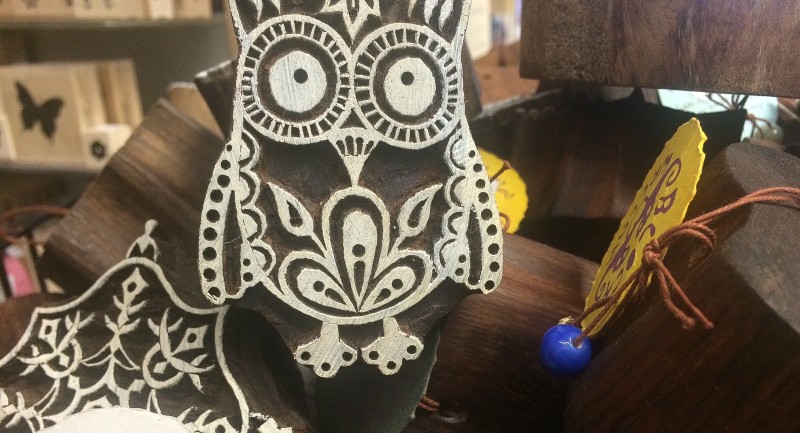 That’s the cool thing about Collage; not only are all the usual subjects here but so too many intriguing things I have never seen anywhere else (except for their other store in Sellwood). 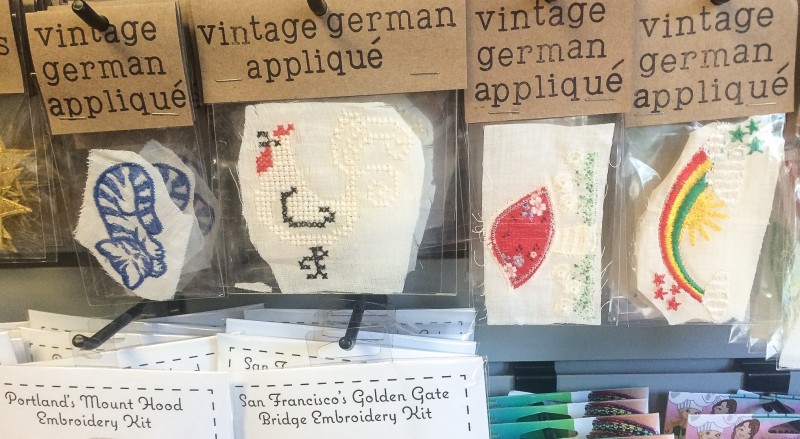 And then there is the world of washi tape at Collage.

Just staring at all those colors (thoughtfully organized by color) was enough to lower my heart rate and make me feel woozy with desire. 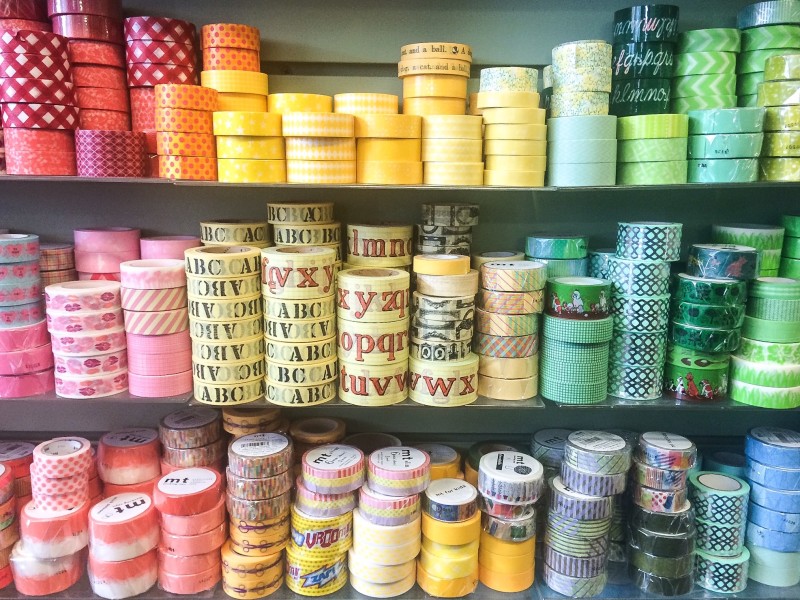 I couldn’t resist buying a few extra rolls — I am addicted to the stuff, and I wanted a little treat just for me.

I walked out of Collage feeling lighter, happier than I have for days. And I wished that just this once, L. could have been alongside me on this pleasure trip. Something tells me she too would groove on it.

So, friends, these have been days of apple pies and art supplies.

People dying in darkened rooms with an appetite only for watching loved ones peaceably co-mingle, while others hungrily scarf on homemade pie, summer-like sunshine, and a world of possibilities in the form of color and materials.

« MEALS ON WHEELS – HOMEMADE MACARONI WITH FOUR CHEESES
A CHICKEN IN EVERY POT: PASTIS, FENNEL AND POTATOES »