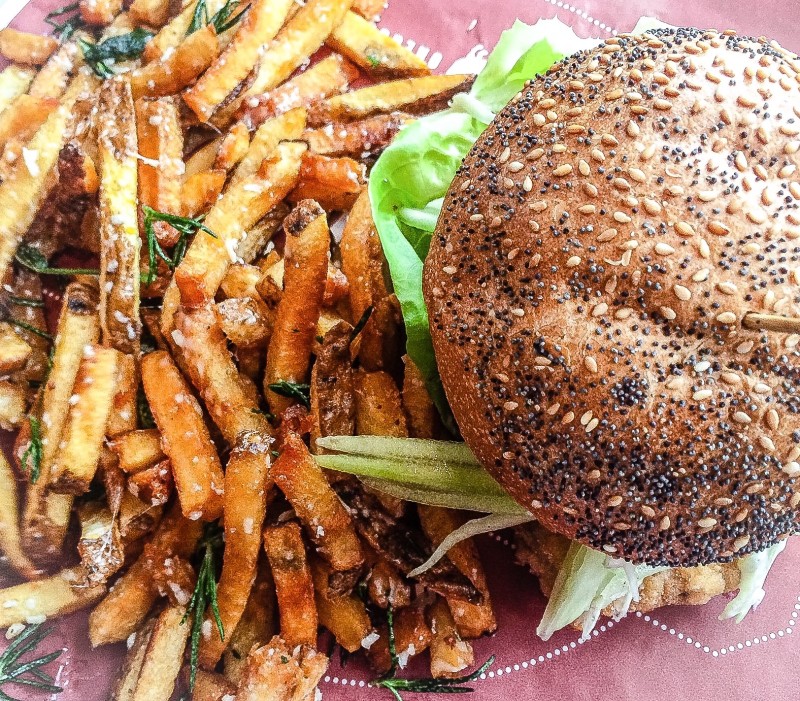 You can expect either gustatory greatness or disastrous dining when a restaurant is named after cured pork back fat.

In the case of Lardo, expect the former.

I  remember the earliest incarnation of Lardo — a tiny food cart Rick Gencarelli opened up on Belmont around 2010. I’d been hearing a lot of buzz about it from someone who had stumbled upon it just after it opened, and I headed over soon after.

Rick was patient with me as I asked a lot of questions, and assured me that his porchetta sandwich would be something he thought I liked. Oblivious to how much food I was about to get, I also ordered the now-signature fries.

The sliced pork was lusciously tender and fragrant with herbs and stuffed inside a bun that took its role as juice catcher seriously. The fries were some of the best ones I’d had in town, seasoned to the hilt with a sure hand who knew how to salt food provocatively  (but still within reason).

I remember at the time thinking, “WTF? This food comes from a food cart?” 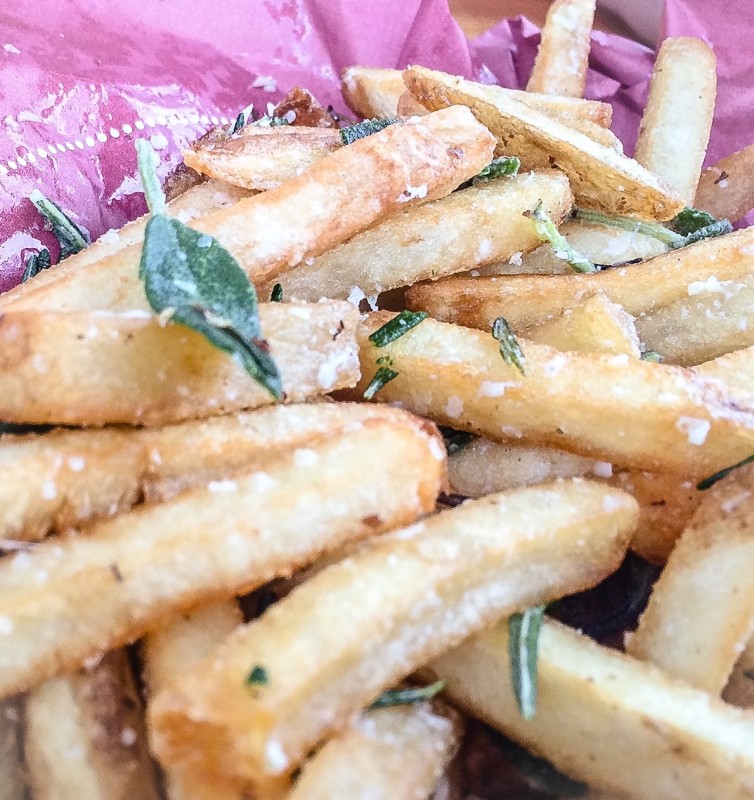 Turns out Mr. Gencarelli had an esteemed cooking career before he landed on our banks, cooking at some of San Francisco’s powerhouses and Todd English’s Olives (one of my favorite eating experiences ever happened here in 2001). A turn as head chef at the Inn at Shelburne Farms in Vermont followed until the lure of Portland beckoned in 2009.

So this accomplished chef started small with a food cart, and clearly his talent and vision has resonated with people here; he now has a place on 12th and Hawthorne (across the street from Burgerville and Cartopia), another one on North Williams, and a third one on 12th and SW Washington (around the corner from Powell’s). 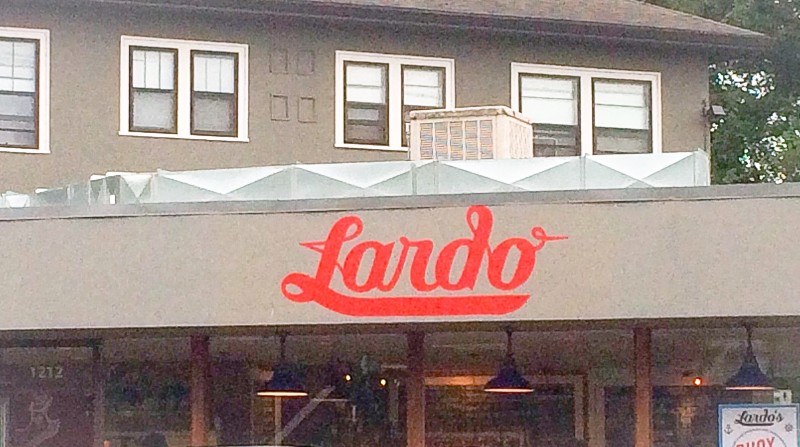 As if this isn’t enough, he also opened up Grassa next door to the latter Lardo; at the former he offers an intriguing rotating pasta and antipasti menu (I will fill you in on that in a later post).

But for now, let’s just look at what makes Lardo such a stand-out in what is already a very crowded field. 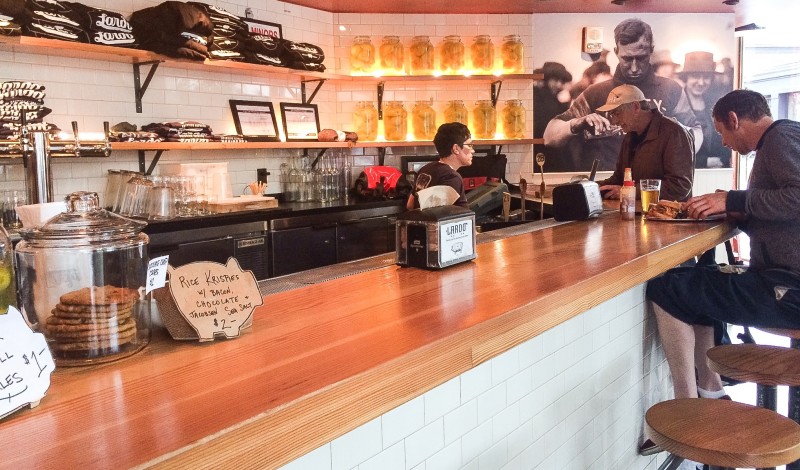 Having returned to two of the Lardo outposts over the last couple weeks, I’m happy to report back that Lardo is still swinging for the fences.

That big beautiful of hunk of fried meat anchored a stellar line-up.

My husband ate this so fast that I almost didn’t see what it was all about, but I was able to snap one last pic of all that steaky, juicy goodness before I polished it off. It reminded me somewhat of that sandwich  I love at Bunk but it also gives a nod to the classic Philly cheesesteak. 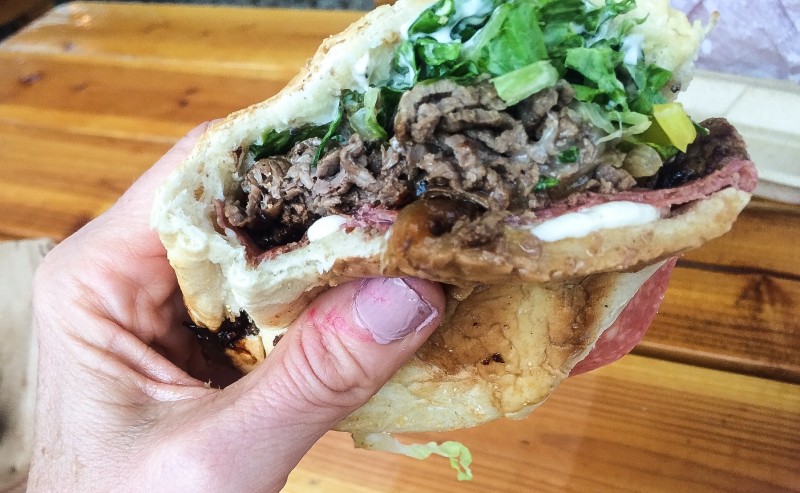 (and yes, my daughter did do a wonderful job on my manicure, thank you for noticing!)

And then one of my all-time favorites sandwiches in town, The Italian Tuna.

The name may sound innocent enough, but don’t let that fool you — it’s a handsome little devil. 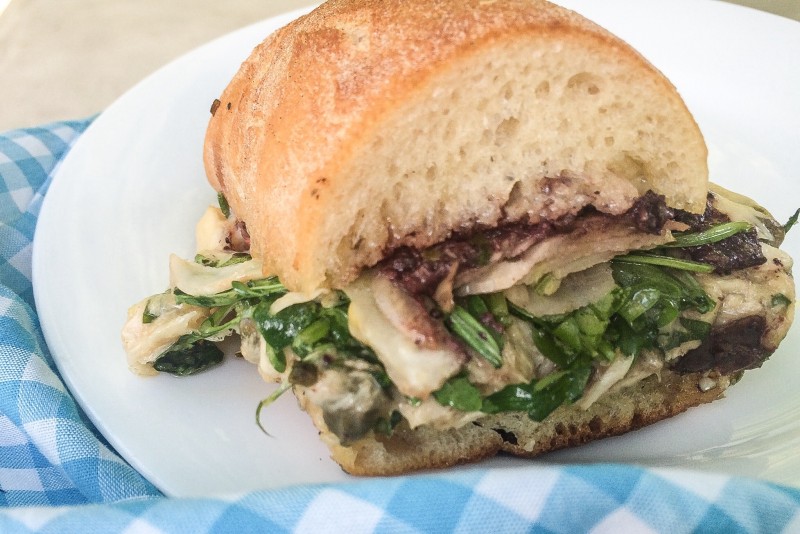 Normally the tuna sandwich on a menu would be the last thing I would ever order, but something about the inclusion of olive tapenade, Provolone and a caper mayo sold me.

Tasting it again recently, I realized that for all the time I’ve spent in Italy, I never once had a sandwich there that was so in-your-face delicious.

It was a maelstrom of flavor, with the tapenade and caper mayo throwing punches at the tuna and the Provolone trying to smooth the ruffled feathers of such big personalities.

It was a knockout.

Lardo now holds a precious spot in my pantheon of favorite Portland sandwich shops, joining Bunk,  Meat Cheese Bread, and Lovejoy Bakers. And if I had to have fries with my sandwich, this would be my automatic, no-brainer first choice.

Hand-cut and fried to perfection, they are adorned with fried herbs, Parmesan and magic. 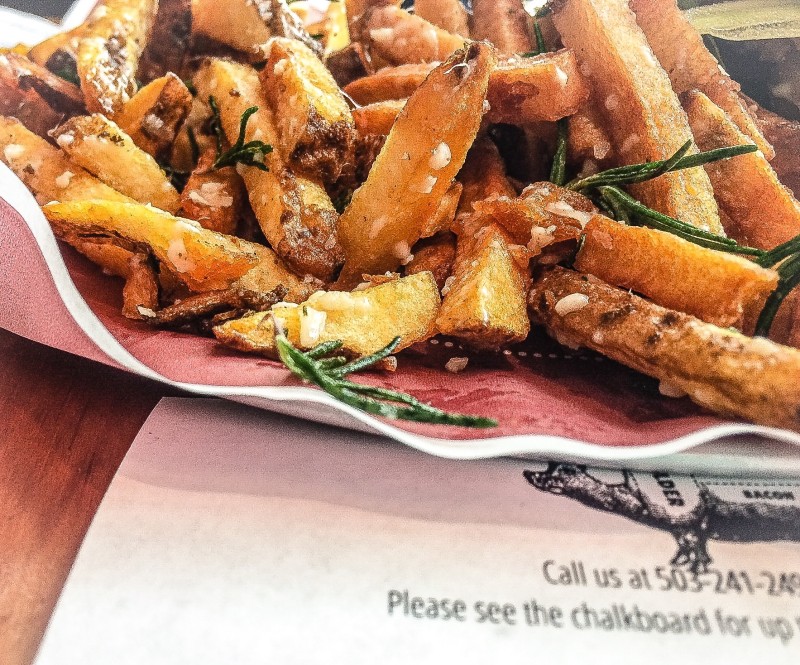 More goodness  awaits future visits: Chickpea Burger with Harissa Slaw and Cucumber Yogurt Sauce, the Double Burger with Porkstrami and Cheddar, and the Pork Meatball Banh Mi with pickled vegetables and Sriracha Mayo, and so on.

Mr. Gencarelli, would you consider opening up a branch of Lardo in the Hollywood district? It would mean less driving for me — and probably a new dress size.

« BAGELS, BIRTHDAYS AND BUDS
TOO MUCH SUMMER FRUIT? MAKE SMOOTHIES. »