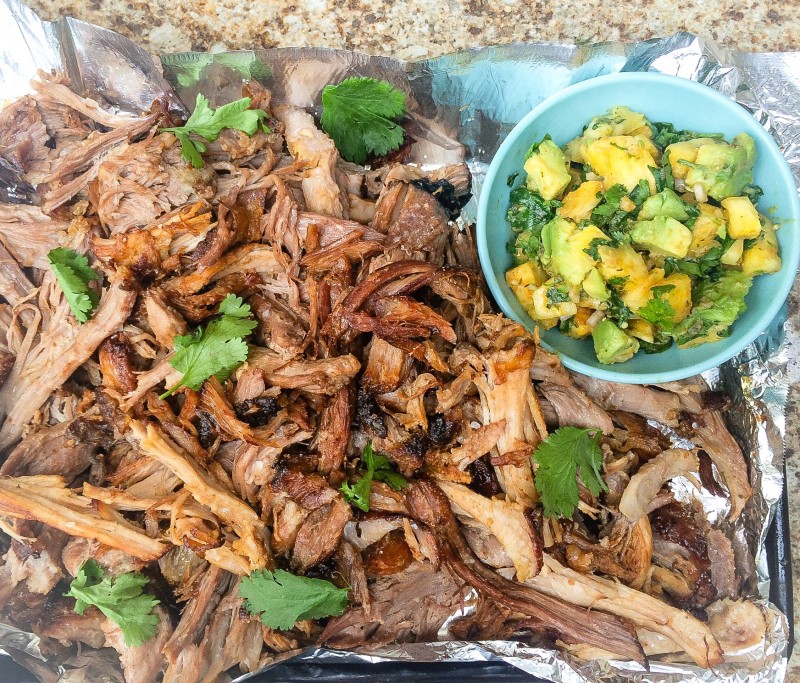 What’s a girl to do when she’s expecting six always-ravenous teenage boys for a birthday sleepover?

Get the Carnitas Bandwagon out, that’s what. A pan of roasted pork is the perfect solution to feeding a crowd; it holds well for different feeding times, it’s economical for large groups, and it’s money for leftovers.

Most importantly, it’s crazy delicious and everyone who walks through the door and catches the wafts of garlicky pork as it’s finishing in the oven will go completely bat-crazy in anticipation. Guaranteed.

Behold one four pound, bone-in pork shoulder, trimmed of most of its fat, and allowed to marinate overnight in fresh lime and orange juice (four of each fruit along with the zest), and two tablespoons each of cumin, granulated garlic, smoked paprika and oregano. 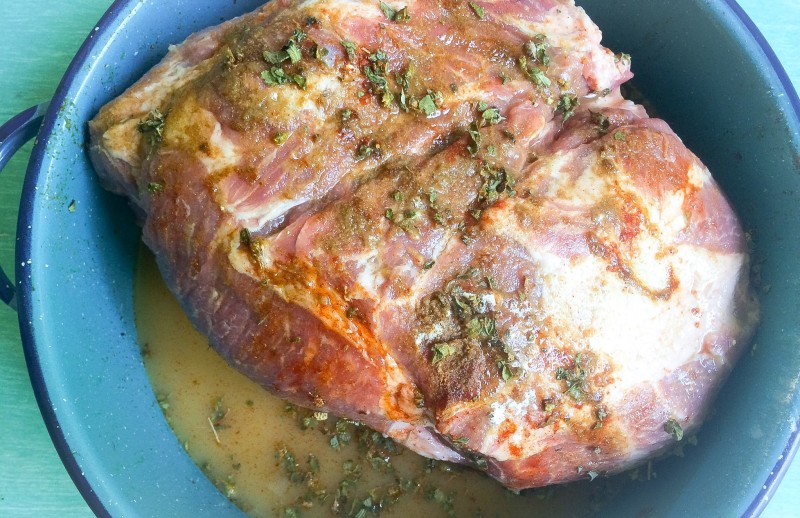 The next morning I put the entire lot into a roasting pan that fit it snugly (too large a pan and all the liquids will evaporate and you’ll have a doozy of a clean up).

By 6:00, it was fork tender and insanely fragrant. I pulled it out of the oven to rest for a few minutes.

By 6:15, I had already forgotten my resolve to let it rest and got busy. Within a few minutes I had the entire roast shredded (and the large pieces cut up into bite size pieces).

By 6:19, I had eaten so much of the pork right out of the pan that I was no longer hungry for dinner (not to worry, I found a way to rally a little later).

If you had been here, I suspect you too would have fallen for its charms — mouth-watering in all of its tender glory with blissfully crispy bites scattered throughout.

I placed it back in the oven to both keep it warm and safe from further nibbling. 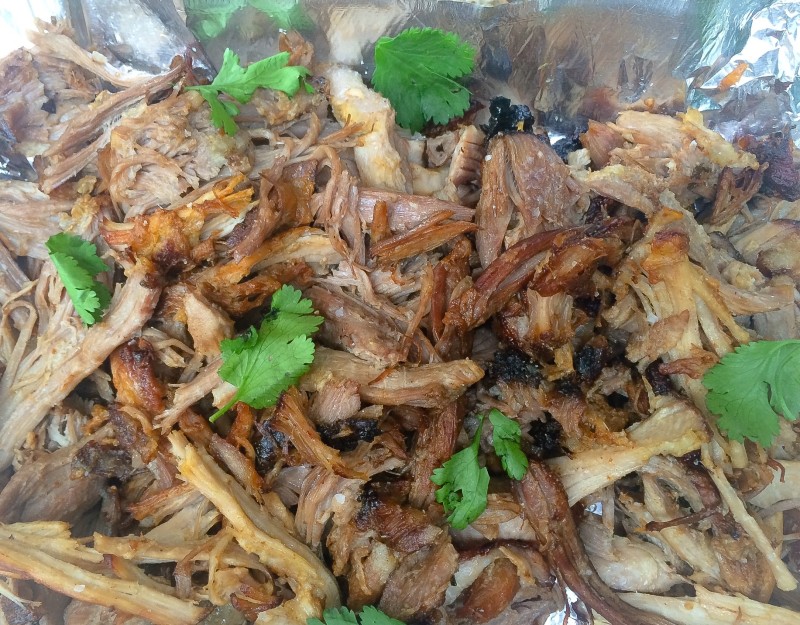 In the meantime, I put on a pot of basmati rice and got to work on a salsa.

I had a ripe pineapple, a couple of perfectly yielding avocados, some green onions, and cilantro. A little lime juice, a pinch of cumin, salt and pepper and we were right where we needed to be. 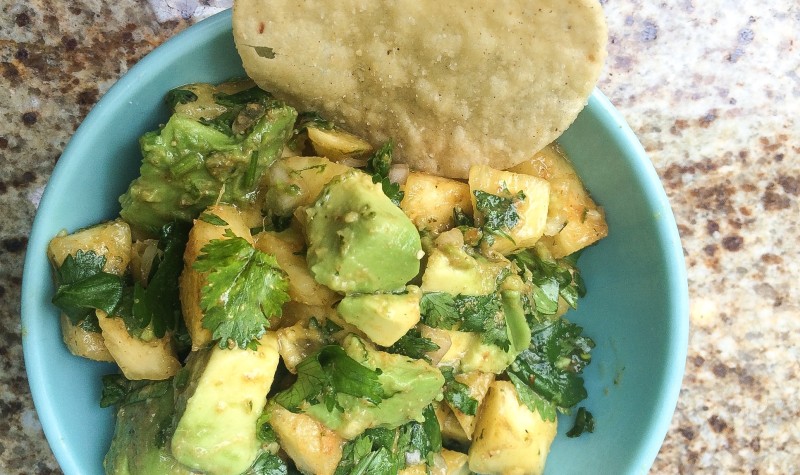 Take a look at the Carnitas and the Pineapple-Avocado Salsa side-by-side.

Have you ever seen a couple that looks better together?

They’re so adorably suited for each other.

When the birthday crew was ready to eat, so was I.  All I had to do was melt some Tillamook cheddar on over-sized flour tortillas in the oven, then add the now-ready basmati rice and shredded pork and wrap it up.

Half the party wanted it straight up, the other with the addition of this salsa —  an easy customization. 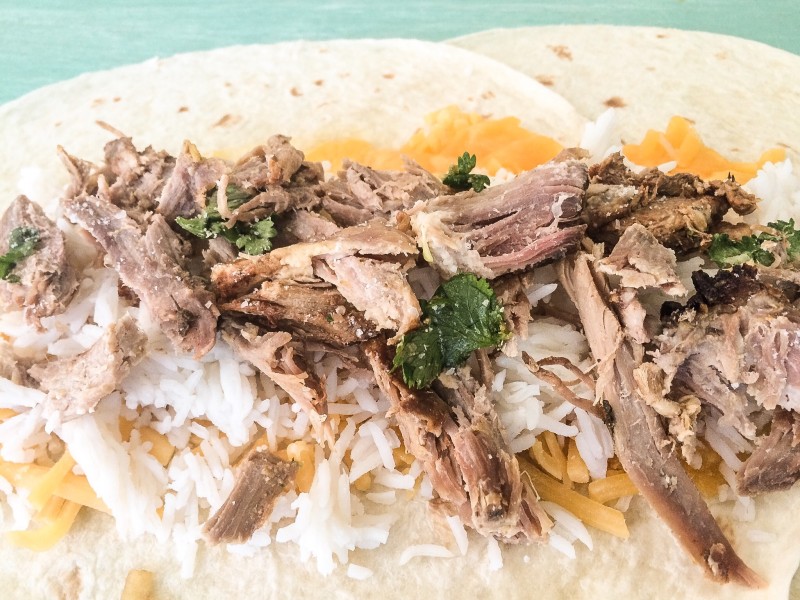 Five of the six kids liked it so much that they asked for a second one (with gargantuan servings like that going in,  it’s easy to see how most of them are just a few inches shy of 6 feet tall — at just 14 years old.) 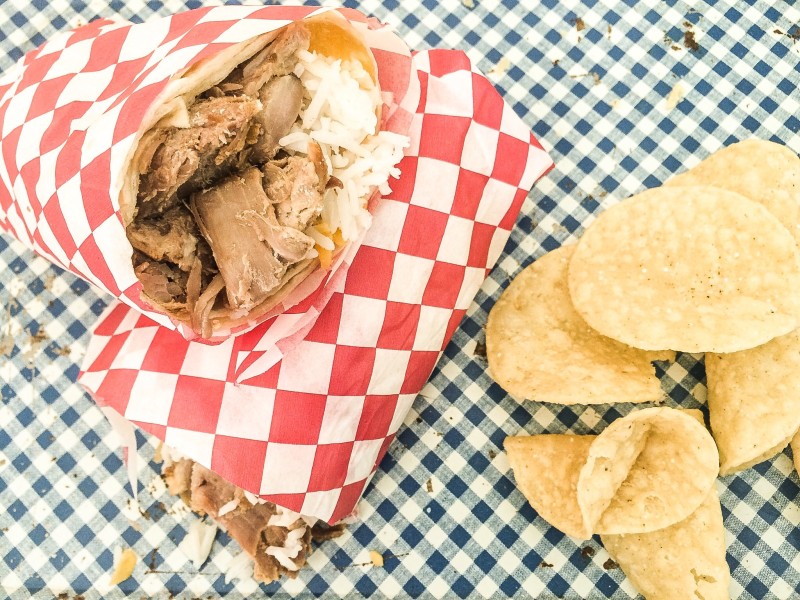 The birthday burritos kept the hunger demons at bay for a couple hours — at least until the Dulce de Leche ice cream made its late night appearance.

So Happy Birthday, Oliver. I couldn’t love you more. 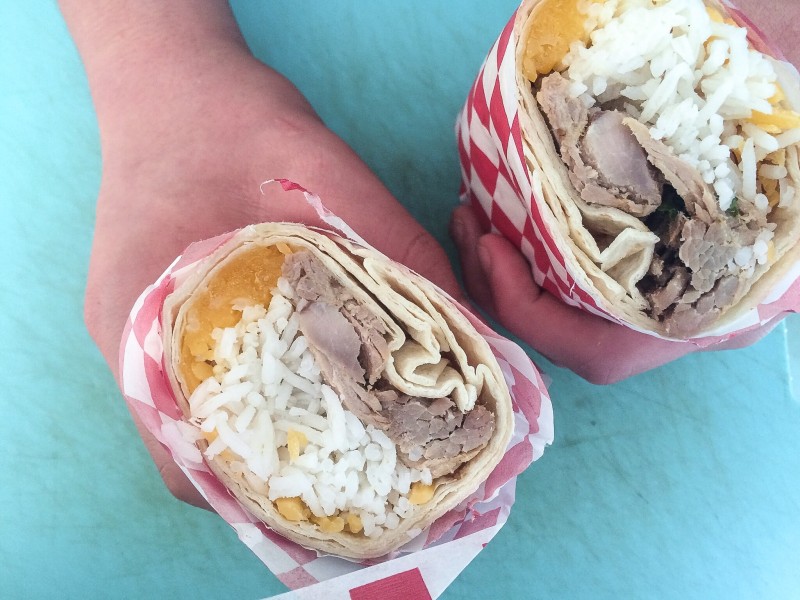 And heaven help our finances– with kids growing like this, something tells me that our grocery bills will soon rival the GNP of many Central American countries.