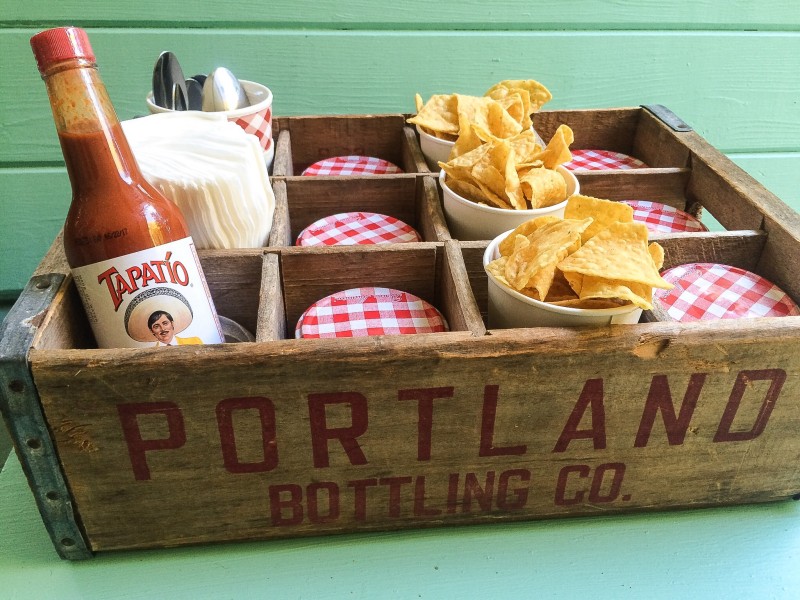 So much sadness in the news this week.

My only tool for combating such ugliness is to first reach out and take care of those in my circle — and then do something deeply restorative and relaxing for myself afterwards.

Once the terrible news broke in Roseburg, I immediately hit the kitchen.

For me, my kitchen is the most comfortable place in my world; it’s chock-full of both vintage goodness and modern conveniences. It features a six foot long marble table in which literally hundreds of different people have converged over the years, and in my domain I have everything I need to create food, both as sustenance and for joy.

My kitchen is my artist studio, my scientific lab, my own little diner — and most importantly, in times like this, it also acts as my shrink’s couch. It’s where I head to work things out.

This week with so much to process, I knew I’d be making a lot of soup.

Because after all, what’s more deeply satisfying and soul-restoring than a bowl of hot soup made with love — and then topped with fresh cilantro? 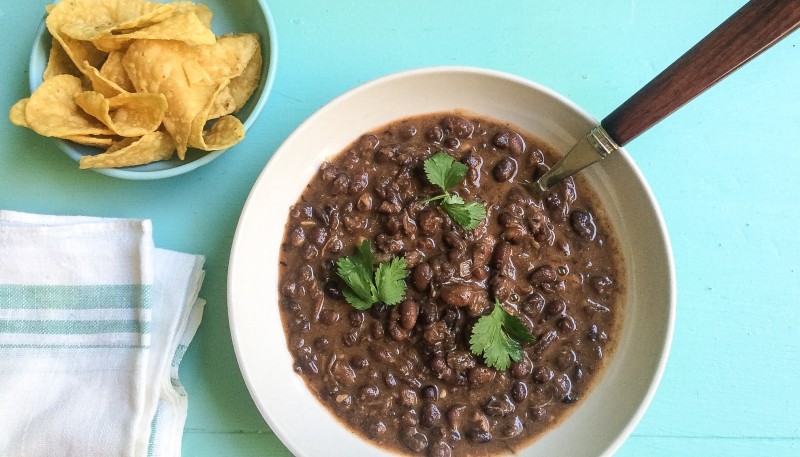 And delivered with care?

Here’s what my Portland Portable Soup Party looked like. 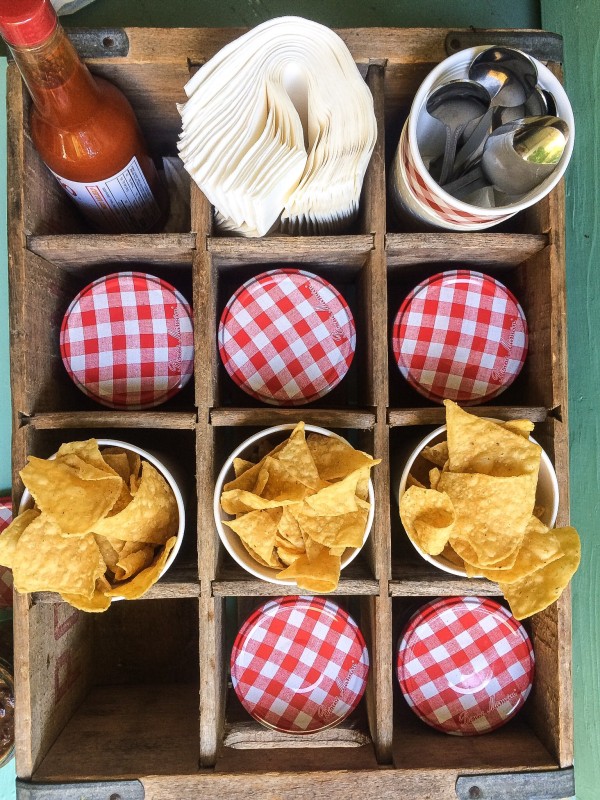 I told a new acquaintance I’d like to drop off lunch for her and her small office, and this is what they got.

A thick, almost stew-like black bean soup was the star and Juanita’s Chips got second billing.

Black beans make the heartiest, most-rib sticking of soups. No, I didn’t have a recipe — I rely heavily on improvisation with soup making– but I do have a couple pieces of advice should you want to tackle this on as well.

My Tips for the Best Homemade Black Bean Soup 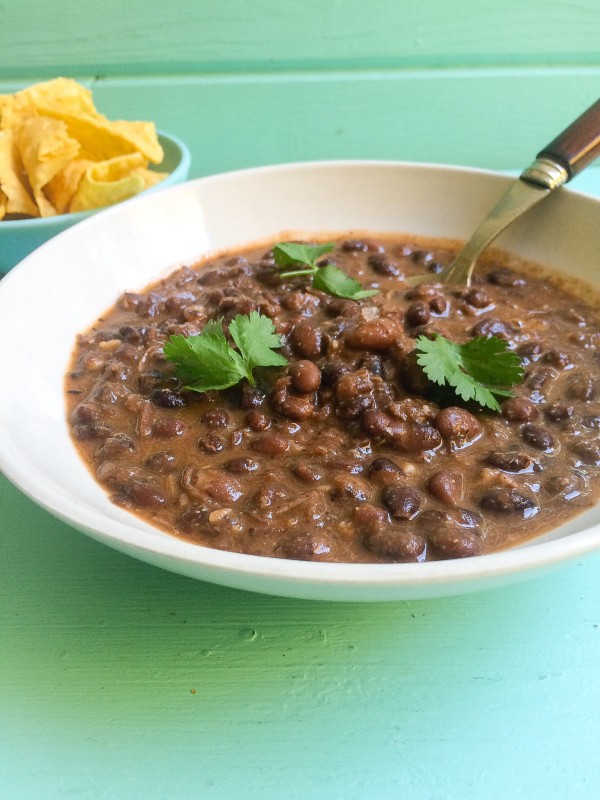 My version clearly benefited from a pound of cooked and shredded carnitas (pork) meat I’d squirreled away in the freezer after my last homemade burrito blow-out; I just added the frozen meat into the cooking black beans and it added a richness and substance to the end result.

If you want to go vegetarian, be sure to add some chipotle peppers (you will find them canned, just puree one or two) or some other dried, soaked and pureed peppers. They’ll add a great depth to your soup and you’ll be glad you took the extra step.

2. Start with dried beans –and then puree some of the cooked ones back in the soup. 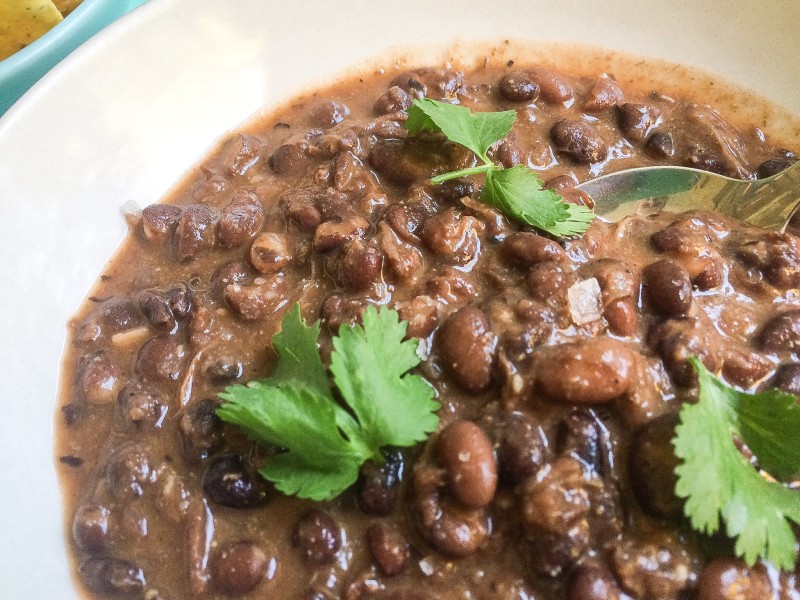 I cooked one third of the black beans separately, pureed them and then added them back to the porky bean mixture. I like how this adds creaminess to the soup and seems to pull it all together. So instead of broth and cooked beans, it tastes and looks more like a stew.

3. Just a splash of acid will help immeasurably.

Between the caramelized (and pureed) onions, shredded pork and the mixture of both pureed and whole beans, this dish was tasting rich but rather monochromatic until I added in just a bit of apple cider vinegar into the soup. This is a trick I learned cooking at Greens Restaurant and I do it all the time.

Think of acid as the reading glasses in the soup; using it puts everything into sharper focus. Over the years I’ve made this soup with the addition of a tiny bit of sherry or rice wine vinegar, and they’ve both worked well, too.

So lots of people got soup this week — family, friends and neighbors (plus there’s more stockpiled in the freezer for another day).

And then there was more meringue making.

It was my wedding anniversary this weekend so the hubby got more of his favorite cookies — this time with a bit of orange oil and dark chocolate chips.

I love the combination of orange and chocolate. 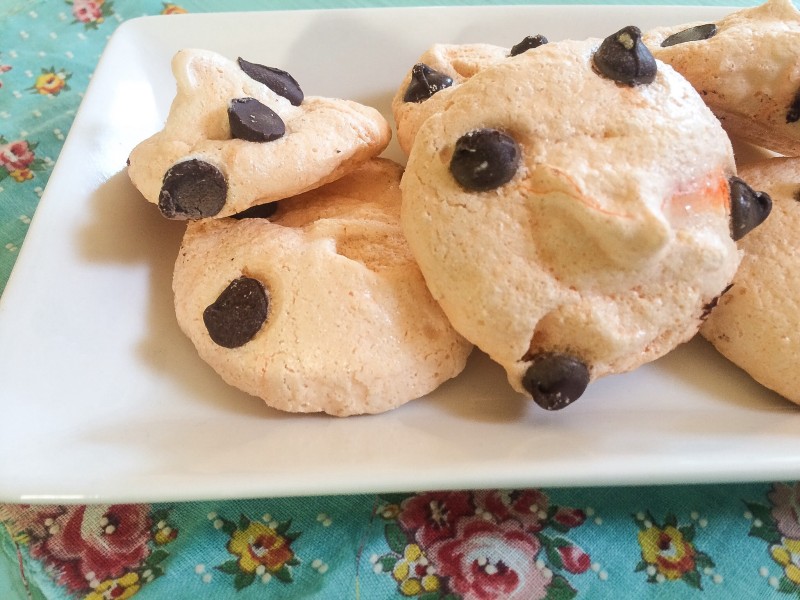 After cooking and cleaning up for days, it was time for a little retail therapy.

I was so excited this week as the good folks at Goodwill Industries offered me two separate behind-the-scenes tours of their stores and outlets.

It was so fascinating.

I’m beyond excited to tell you all about that — but until I can get to that in a later post, let me show you how else Goodwill brightened my week.

I decided to go to the Goodwill Superstore on 6th –it’s been a year since I’ve been to this one and I wanted to see what I might find.

Holy Cow — the Goodwill Thrift Gods really smiled on me. 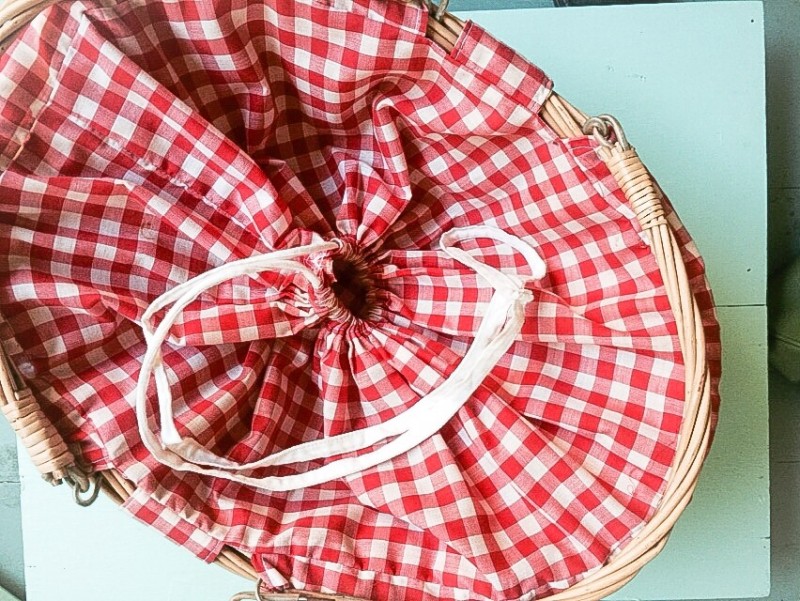 I found this darling picnic basket in one of my favorites patterns, bright red gingham. 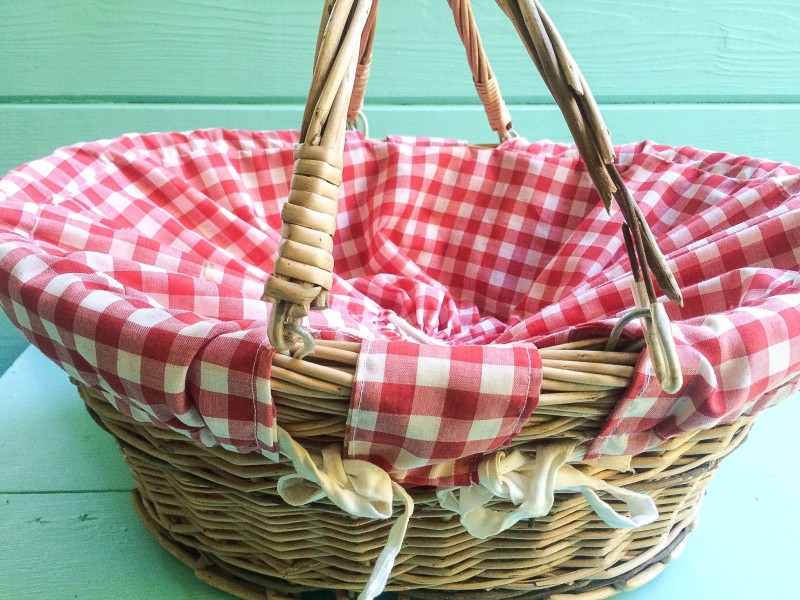 If someone told you they were making you a meal and dropping it off, wouldn’t you be so crazy excited to see this on your front porch waiting for you?

Four dollars for all this cuteness.

But wait– I am only getting started here. 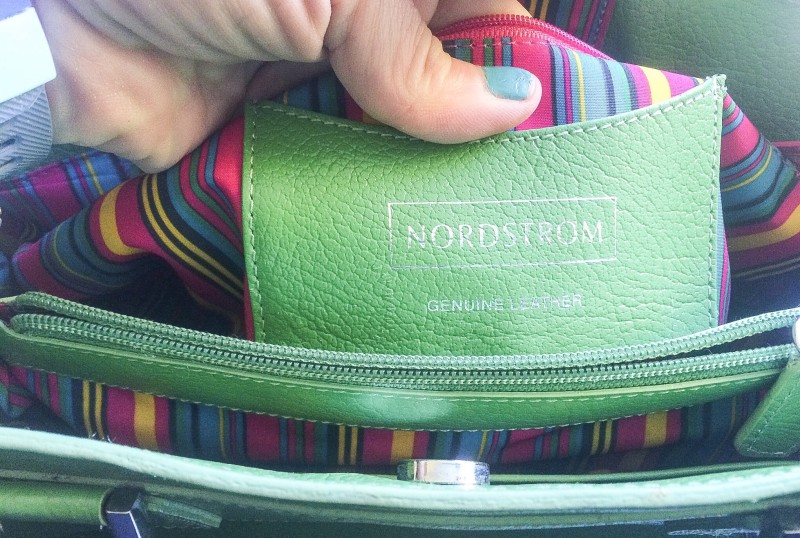 I found this Nordstrom leather purse in a wonderful Kelly/Moss Green color with a bright cotton striped interior. 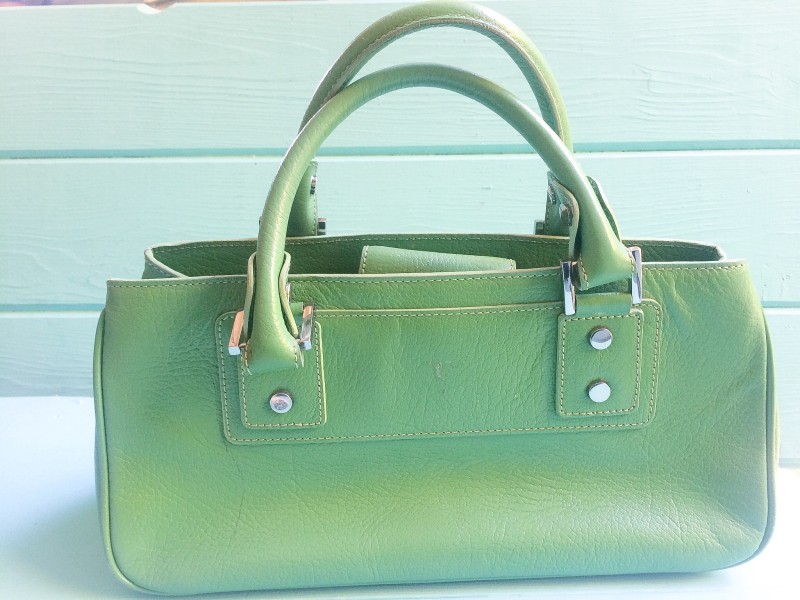 I wiped it off gently with a wet cloth and was able to remove the sticker goo and slight scuff marks and it looks as good as new.

It’s just the right sized for my wallet, sunglasses, phone, lipstick and mints and a tiny pad and pen.

Seven dollars — and I love it.

I bought two more lacrosse sticks so my hubby and Charlotte can throw a ball around with Oliver as he tries to learn the sport. Eight dollars for both — such a great deal.

Hold your horses, I’m not done yet.

The housewares aisles beckoned, and because this particular branch gets all the items not yet purchased at their retail boutiques (or e-commerce site), there are lots of treasures here if you care to spend just a few minutes to peruse. 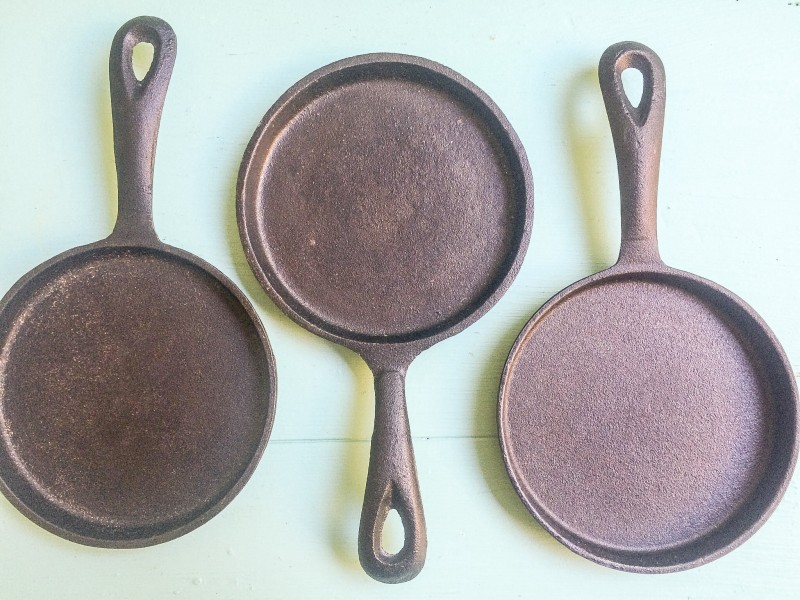 I think I’m going to have to make fried chicken again and then deliver it to pals on their own individual skillet.

Wouldn’t that be the best delivered lunch ever?

And lastly, I found some drool-worthy French flatware — at just twenty nine cents a piece. 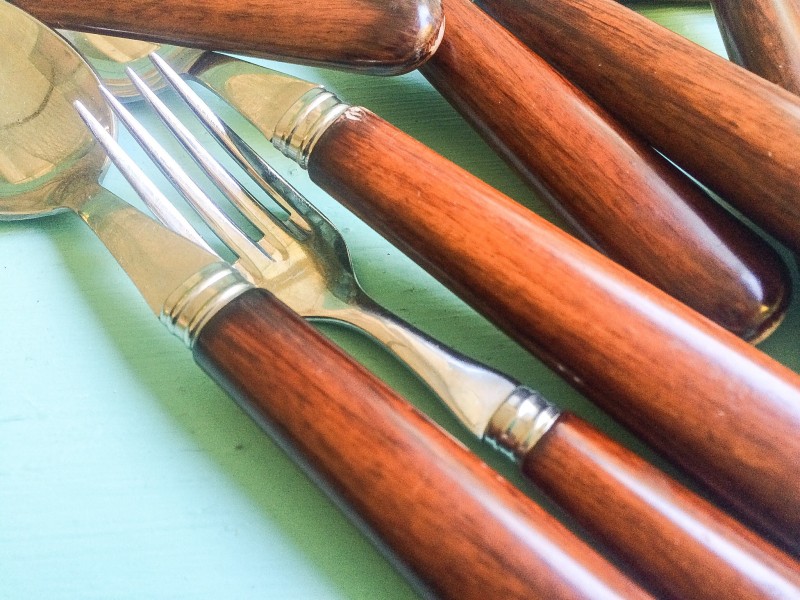 These guys are substantial — they have a heft you don’t find in most flatware, and the handles have the most beautiful hardwood sheen (even though I think they may be plastic). 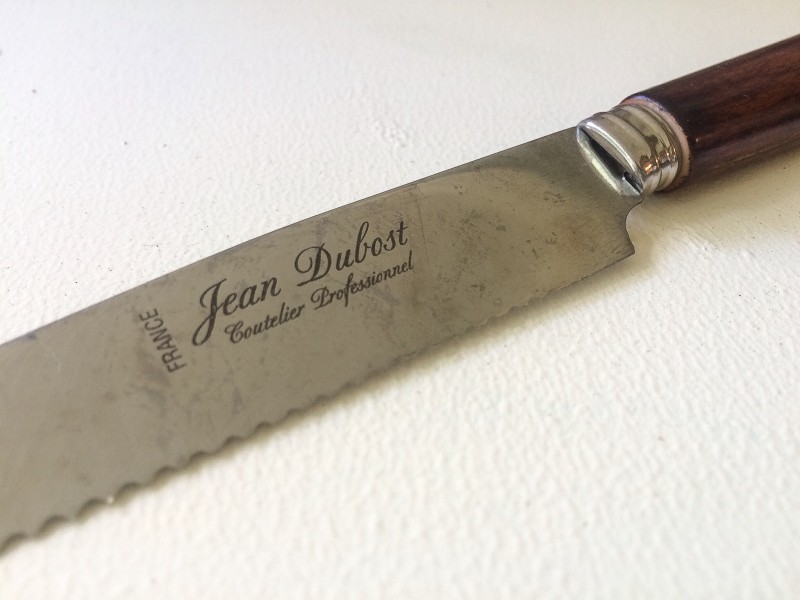 I found ten assorted pieces in all and I think I’ll put them in my Picnic-and-Portable Eating Essentials Kit in my car.

Sometimes I find something delicious when I am out and about and because I have plates and spoons and the like already in the car, I can take my goodness anywhere to enjoy it. 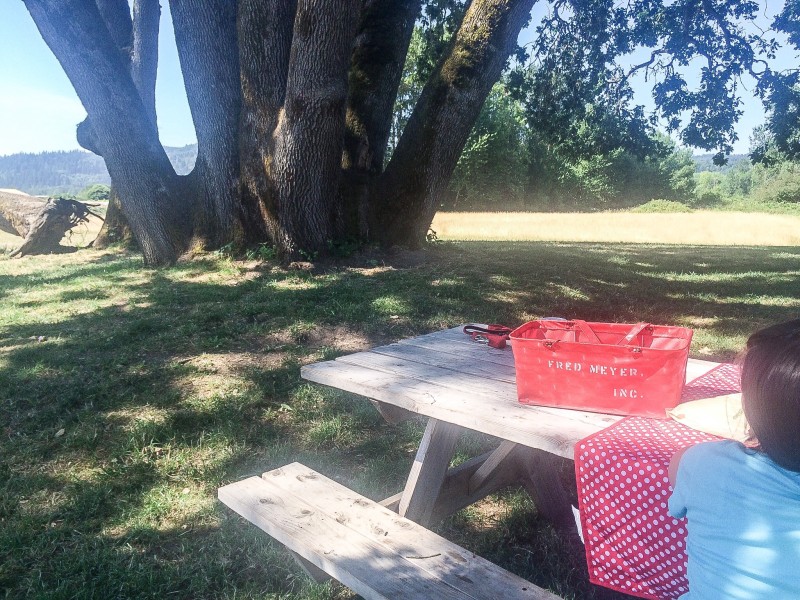 Thanks to Goodwill — and all the amazing things they’re doing behind the scenes to make a difference in people’s lives. What an eye-opener your tour was for me.

Props to the community of Nextdoor GrantPark; a store owner (and parent at our school) was viciously attacked in a robbery and we joined so many good folks who have now contributed to his medical bill fund (multiple eye surgeries have been necessary because of the attack).  You can read about it here.

And most of all this week, here’s to Chris Mintz. He’s the army veteran who found himself in the middle of the Roseburg horror and showed us all what true courage is all about.

He urged others to take cover and then allegedly told the gunman “You’re not getting by me”. He was eventually shot seven times (even after telling the gunman it was his autistic’s son birthday that day) — and survived.

His selfless bravery saved the lives of many people that day — and gave the advantage of a few minutes to the cops who arrived so quickly and helped put an end to this monster.

Chris, when we think back on this awful day, I hope it’s your name and your heroism (and not the other guy with the rifle) that we all remember most.