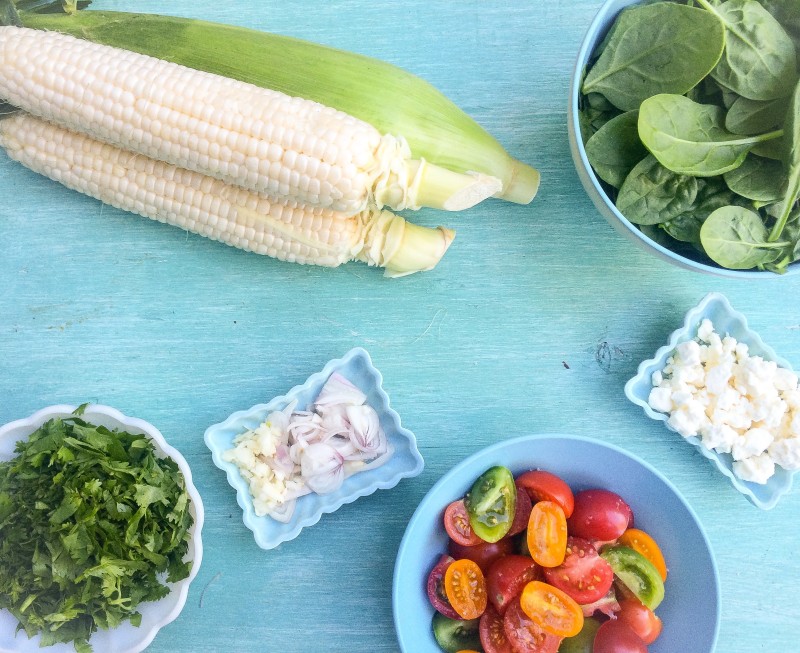 Maybe it was all those frozen custards. Or egg sandwiches. Or burgers.

Because suddenly the most appealing thing to eat right now is that which incorporates summer’s bumper crop.

Now that my Midwestern vacation is over (and consequently all my clothes are that much tighter), right now I’m just craving salads and lighter foods. Aren’t you?

I’ve noticed that the sun is not as strong overhead as it used to be, and the days are getting noticeably shorter. These feel like strong visual clues — get all that ripe summer produce goodness while you can.

Corn. Tomatoes. Peaches. Berries. Cucumbers. Basil. It’s all at its best as we slide into mid-August, and I am going to fill up while the getting’s good. 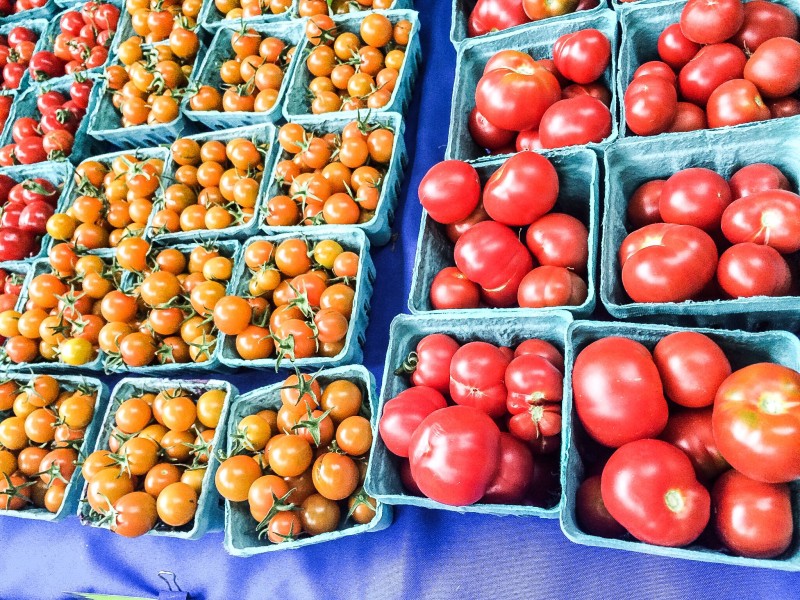 A neighbor dropped by these funny looking lemon cucumbers (plus a nubile onion) and that was a great starting point for last night’s dinner. I also grabbed a thick handful of basil from my garden. 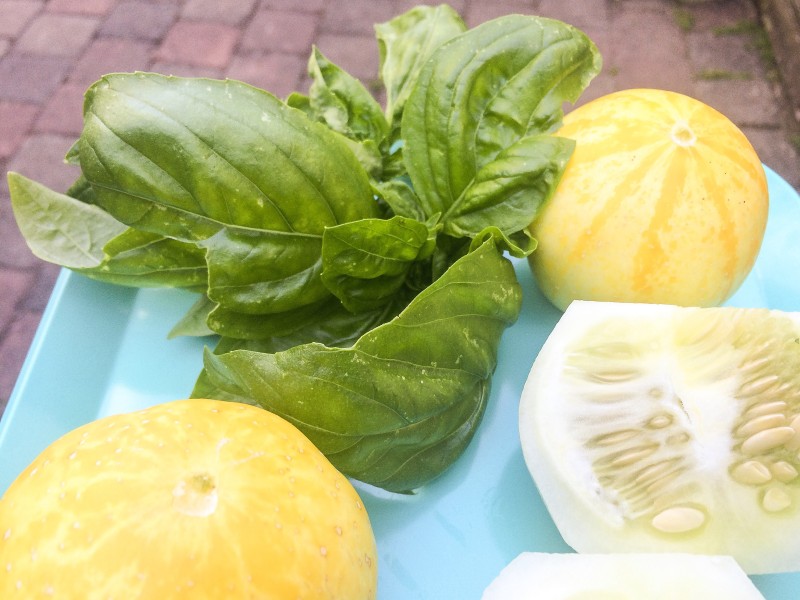 I headed over to Whole Foods to see what looked good to eat alongside.

I came back with a pound of wheat berries, a couple ears of corn, a few pounds of tomatoes, cilantro (the one herb I don’t have in my garden), some lemons, garlic and shallots. I also splurged on a nice piece of salmon; after all that beef and pork in the last two weeks, the lightness and protein punch of seafood was just what I was looking for. 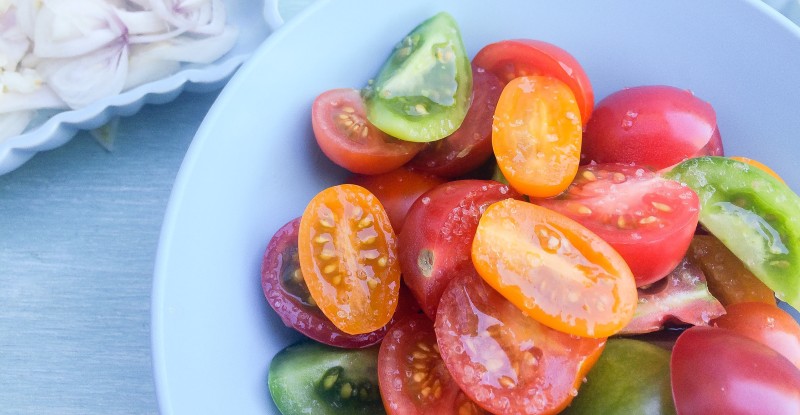 Wheat berries are delicious — nutty, substantial, and play well with others — and they are packed with protein, iron and fiber. They’re substantial enough that they can hold their own with almost any addition and they’re filling enough that they are terrific to bring to picnics or potlucks.

(Really, haven’t you been potluck pasta salad-ed to death by this time of the year?)

They also take almost an hour to cook so I started them off as soon as I got home.

I cooked the shallots and garlic in a little olive oil until just barely golden and then de-glazed with Champagne vinegar. 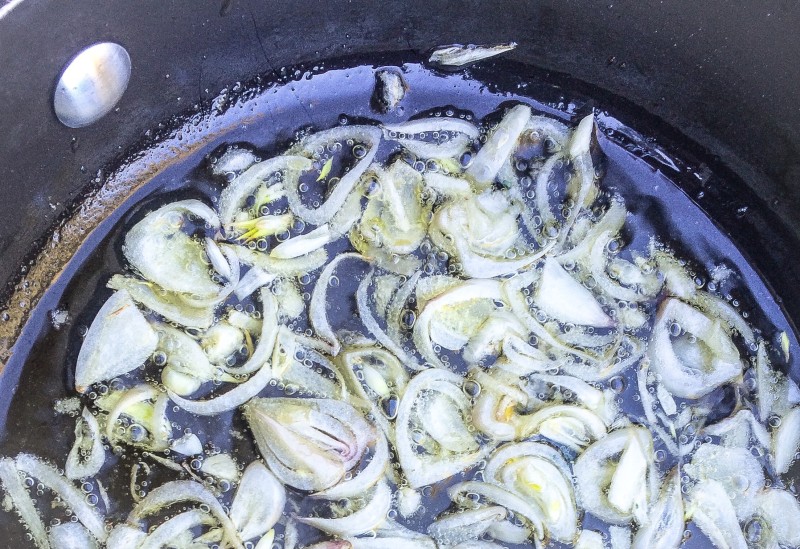 Not much left to do. I took the kernels off the corn, halved the tomatoes, peeled and cut the cucumbers and grabbed the feta and fresh spinach from the fridge. 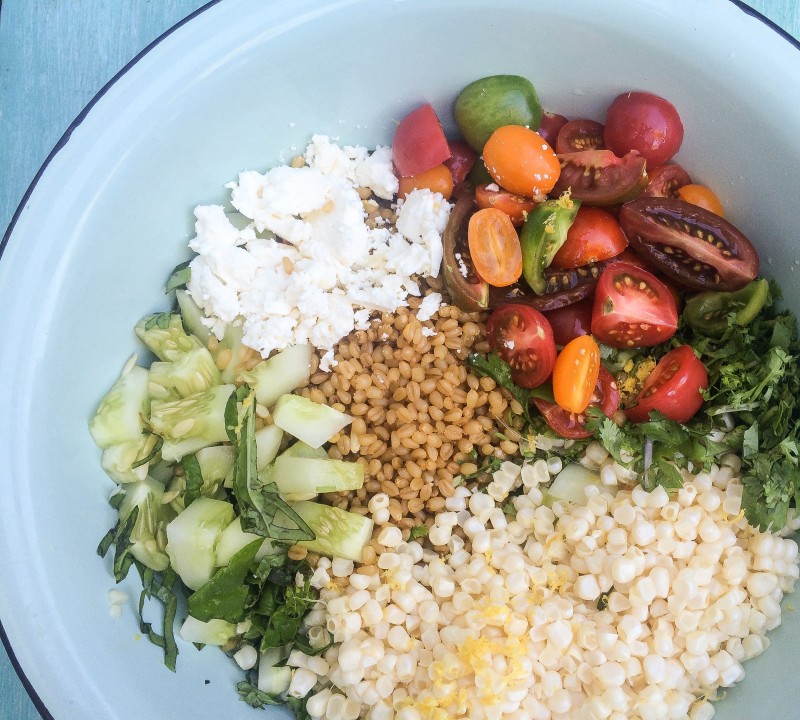 I had a big, gorgeous lemon in the fridge so I zested and juiced that and added that in, too.

The large fillet of salmon took only fifteen minutes to roast in the 450 degree oven and I set that aside. 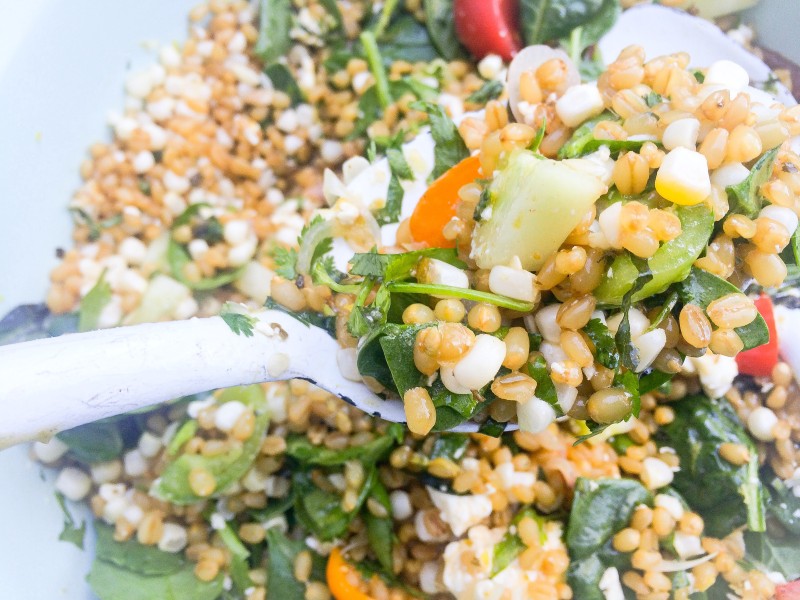 The corn kernels were so sweet and fresh tasting that I let only the warmth of the cooked wheat berries soften them.

(God I love fresh corn, and that and fresh tomatoes are what I am going to miss most come October.)

My husband and I loved the end result.

We spooned chunks of the lemony, garlicky salmon into the warm salad and in every bite there seemed to be a new surprise: the pop of a fresh corn kernel, the crispness of baby spinach and cucumber, the tang of feta, the sweetness of the tomatoes.

Summer eating can be a see-saw; the richness of frozen confections and heavy grilled meats balanced by the lightness of ripe fresh fruit and light salads dressed with zesty viniagrettes.

After my Wisconsin blow-out, the latter sounds just about right. 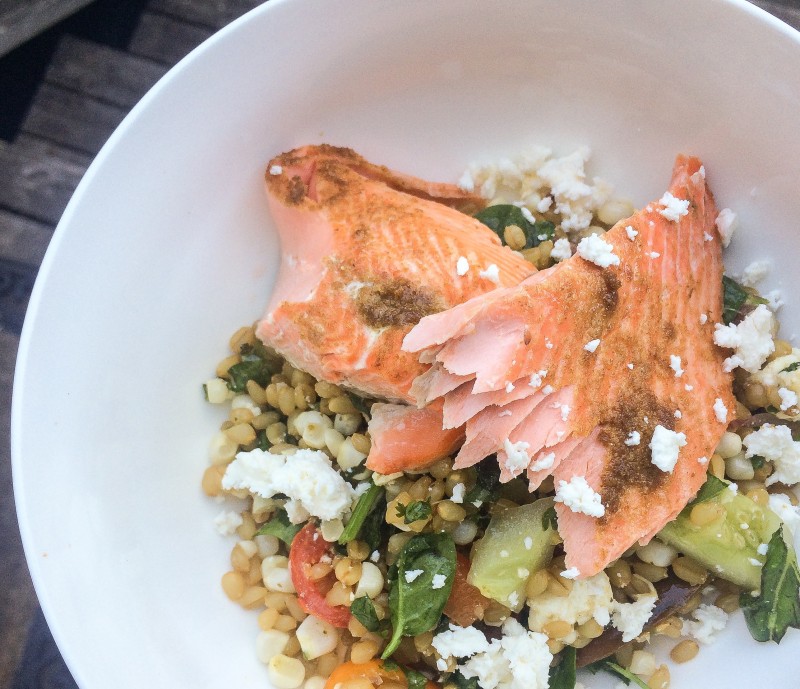 « LAKE HOUSE VACATION, THE END GAME
WICKED IN PORTLAND — AND THE CASE FOR THE WIZARD OF OZ »